After India, Pakistan Square Off, ICJ Says It Will Rule on Jadhav Matter 'as Soon as Possible'

Arguments centred on question of urgency, and the status of the Vienna Convention on Consular Relations 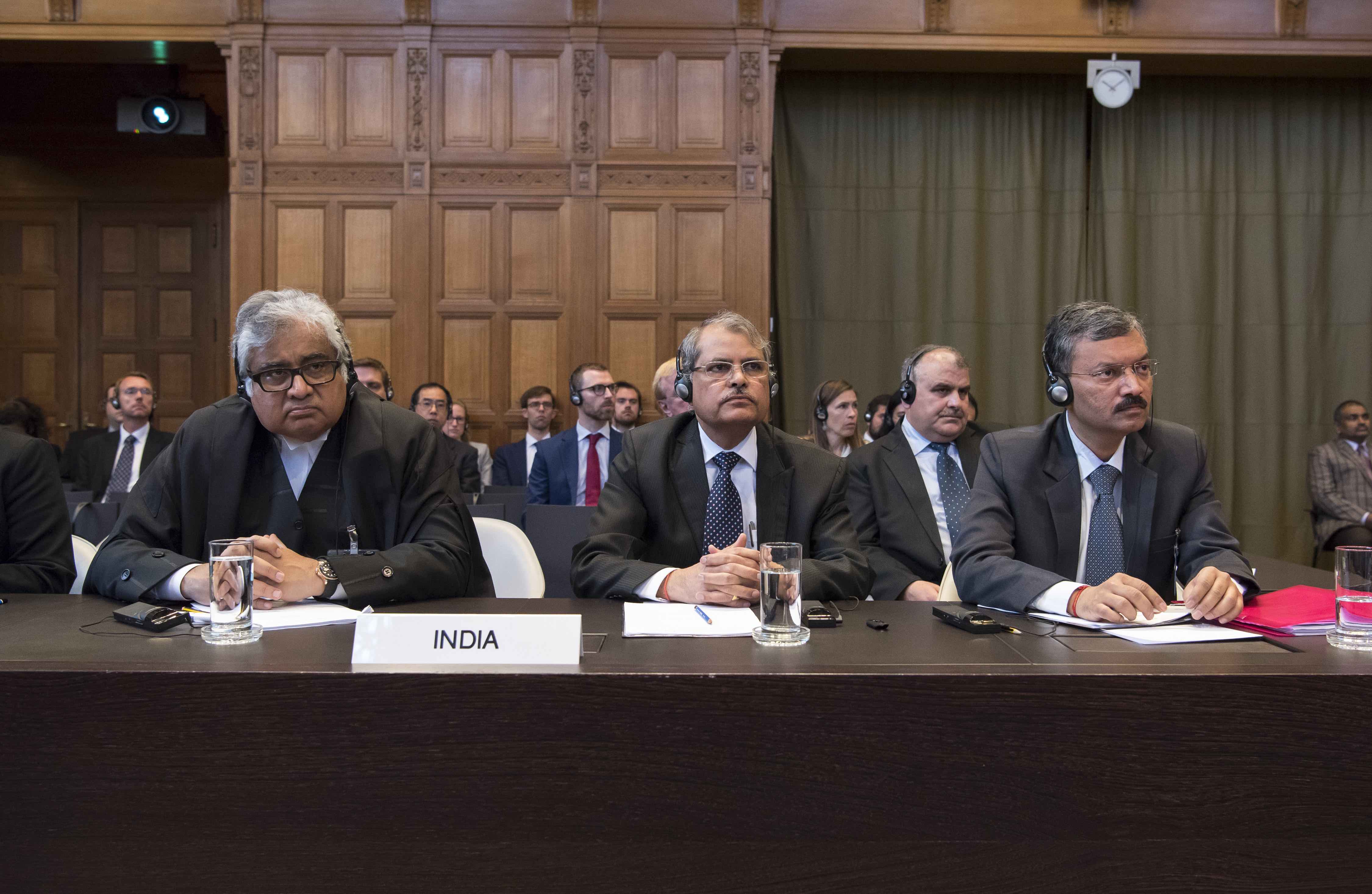 The Indian legal team at the ICJ hearings in the Kulbhushan Jadhav matter. Photo: ICJ

The Hague/New Delhi: India and Pakistan appeared before the International Court of Justice on Monday over the case of Kulbhushan Sudhir Jadhav with New Delhi demanding the immediate suspension of the death sentence imposed on the former Indian naval officer convicted by Pakistan of espionage, and Islamabad accusing the Indian side of using the world court as a stage for “political theatre” through a “misconceived” plea.

The public hearing in The Hague – seat of the world court – was not without its ironies. The case was initiated by India, which has steadfastly opposed “mediation” in all of its disputes with Pakistan, barring those related to the Indus Waters Treaty. And the matter concerns the Pakistani allegation of India using clandestine agents to foment terror across the border – a charge that India usually levels against Pakistan.

The two neighbours last faced off at the ICJ 18 years ago when Islamabad sought its intervention over the August 1999 shooting of a naval aircraft. Earlier this month, India took the Jadhav case to the court, accusing Pakistan of violating the Vienna Convention on Consular Relations and conducting a “farcical trial” in order to convict Jadhav without a “shred of evidence”.

After hearing the arguments of the two sides, the court said it will issue its order on India’s request for provisional measures “as soon as possible”.

“The date on which this order will be delivered at a public sitting will be duly communicated to the parties,” the court said.

The head of the Indian legal team kicked off the proceedings in the morning by demanding the immediate suspension of Jadhav’s death sentence, expressing fears that Pakistan could execute him even before the hearing at the ICJ was over.

“On behalf of the Republic of India, I request that pending final judgement in this case, the Court indicate:

(a) that the Government of the Islamic Republic of Pakistan take all measures necessary to ensure that  Kulbhushan Sudhir Jadhav is not executed;

(b) that the Government of the Islamic Republic of Pakistan report to the Court the action it has taken in pursuance of sub-paragraph (a); and

(c) that the Government of the Islamic Republic of Pakistan ensure that no action is taken that might prejudice the rights of the Republic of India or Kulbhushan Sudhir Jadhav with respect to any decision the Court may render on the merits of the case.”

However, Pakistan asserted that Jadhav’s execution was not imminent, saying that a time frame of 150 days is provided for in Pakistani law for a convict on death row to seek clemency. If the clock in Jadhav’s case started ticking on April 10, 2017 – assuming the date on which his conviction was announced was also the date the sentence was pronounced – the period could extend to well beyond August, 2017. Indian officials, however, say Pakistan has not indicated when exactly Jadhav was convicted.

On Monday, India made a forceful submission as the ICJ began hearing the case of the 46-year-old former Navy officer who was arrested on March 3, 2016 and sentenced to death by a Pakistani military court on charges of espionage and subversive activities a year later.

“Jadhav has not got the right to get proper legal assistance and the right to consular access. There is an immediate threat to him to be executed even before a decision is passed,” joint secretary in the Ministry of External Affairs, Deepak Mittal, who formally led the Indian legal team, told the court in his opening remarks.

Representing India, lead attorney Harish Salve said, “The execution of the death sentence cannot be done while this court is hearing the appeal. Else, it will be a violation of the Vienna Convention.”

Salve cited numerous precedents from the ICJ’s earlier rulings in cases concerning disputes over consular access to establish the paramountcy of the Vienna Convention.

He said Pakistan had denied India its 16 requests for consular access.

“The graver the charges, the greater the need for continued adherence of the Vienna Convention. Jadhav has been in judicial custody without any communication with his family,” he said.

Article 36 of the Vienna Convention on Consular Relations is sacrosanct, Salve said, citing in addition the International Covenant on Civil and Political Rights (ICCPR) that recognises that no one can be arbitrarily be deprived of their lives.

India had not been given the copy of the charges filed against Jadhav, Salve said.

“The need for a wholesome compliance is greater when charges are serious. We want appropriate legal representation for Kulbhushan Jadhav,” he said.

Not just had all requests for consular access fallen on “deaf ears”, the trial was conducted without providing Jadhav his rights. Pakistan did not even respond to Jadhav’s mother’s pleas to see her son, India told the court.

Human rights treated as “basics” all over had been thrown to the wind by Pakistan and the trial had been vitiated, India argued.

Though Pakistan says Jadhav has the right to appeal, two-star generals will hear his mercy plea, Salve stressed, questioning the impartiality of the process.

India asserted that it wants the ICJ to annul Jadhav’s death sentence and order Pakistan to ensure that no action is taken that may prejudice the rights of India or of Jadhav. 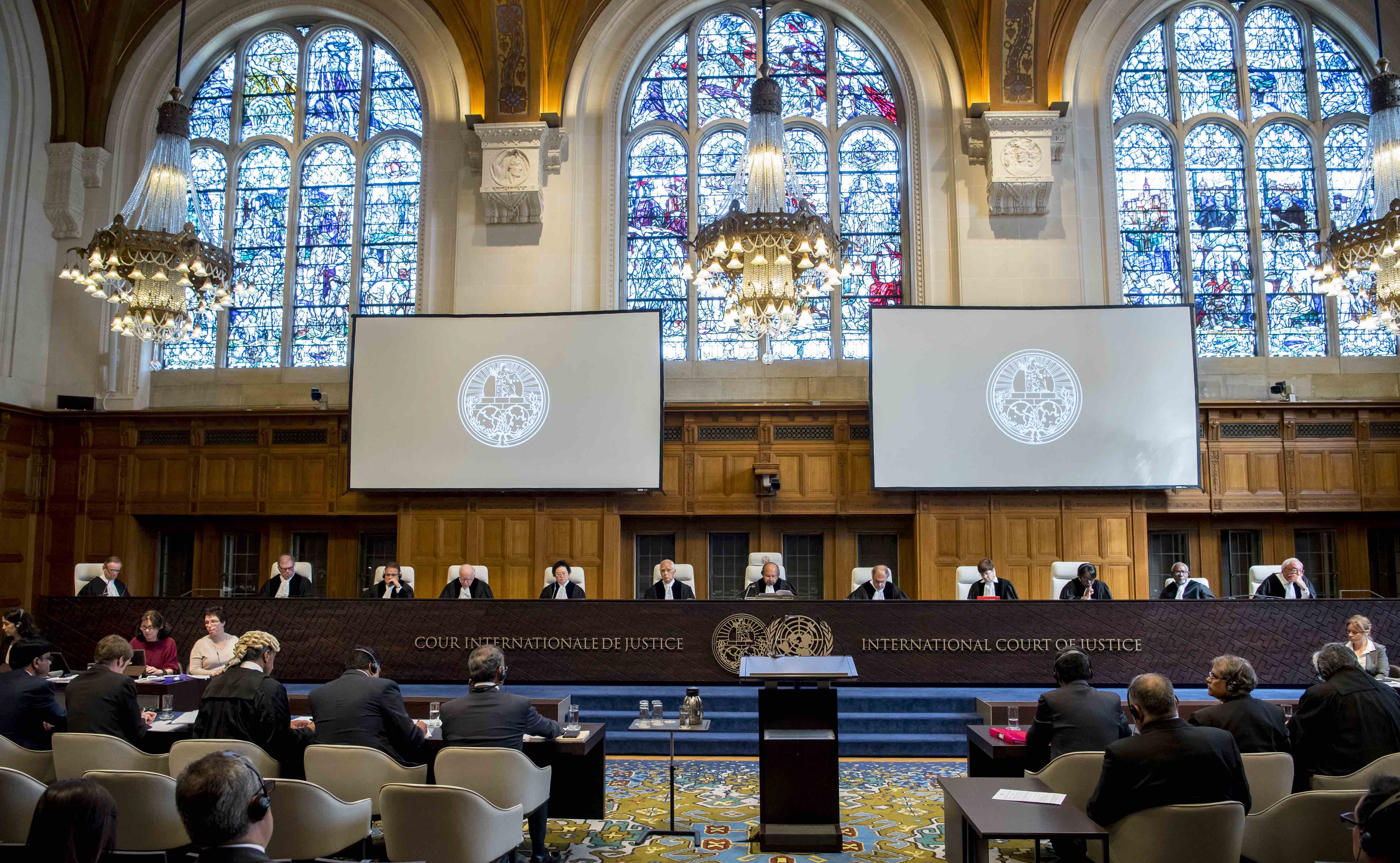 Judges of the Court during the hearings. Credit: ICJ

Following India’s arguments, Pakistan, in its submission before the court, said India’s application on Jadhav was “unnecessary and misconceived” and must be dismissed.

India has seen it fit to use the International Court of Justice as a stage for “political theatre” but “we will not respond in kind”, Mohammad Faisal of the Pakistan foreign office said in his opening remarks in response to India’s submissions earlier in the day.

The Vienna Convention’s provisions on consular access were not intended for a “spy” involved in terror activities, Pakistan asserted.

When Pakistan sought to play the purported “confessional” video of Jadhav at the public hearing, the ICJ denied it permission.

Later, after the hearings, Salve told the media that this denial of permission was a setback to Pakistan.

“If you want to show something and it helps your case if you are denied that right, it’s a setback. So, in that sense, yeah! They wanted to show it and that opportunity was taken away,” he told a news channel.

“They did not allow it. We objected and the court felt it was not appropriate,” Salve said.

“Simply by referring to the clemency process available as a right to commander Jadhav, a period of 150 days is provided for in this regard which even if (it) started on April 10, 2017, which is the date of conviction at first instance, could extend to well beyond August 2017.

“There is also of course the potential for the writ petition of the High Court to be invoked as we believe India must be well aware,” he said.

On India invoking the Vienna Convention, Qureshi said, “Vienna Convention Article 36, which adopted to set up standards of conduct particularly concerning communications and contact with nationals of the sending state which would contribute to the development of the friendly relations among nations…the observation we made immediately is this is unlikely to apply in the context of a spy, terrorist sent by a state to engage in acts of terror.”

Faisal, in his submission before the court, claimed that India had been unable or “perhaps more accurately unwilling to provide” an explanation for Jadhav’s passport, which has a Muslim name on it.

“We submit that India’s silence is telling. Indeed, India could and should have responded to a letter of request dated January 23, 2017, seeking India’s assistance to investigate the criminal activity and links with people of India which commander Jadhav has revealed,” he said. The Agent of Pakistan, Dr. Mohammed Faisal, during the hearings.Credit: ICJ

There has been deafening silence and no response from India on Pakistan’s accusations on Jadhav, Pakistan’s lawyer Qureshi said.

He urged the court to dismiss India’s application on three accounts – that there was “no urgency”, the relief sought was “manifestly unavailable” and the jurisdiction under the Vienna Convention was not “as unchallenged” as India has suggested.

“It (the jurisdiction of the court) is limited and indeed it is further limited at qualified rules supplemented by the 2008 agreement” between India and Pakistan on consular access,” Qureshi said. The 2008 agreement stated that either party may decide on granting consular access in cases involving national security after taking a call “on merits”.

Instead, India appears to have been in hyperdrive mode to brief its press that Jadhav took early retirement and was kidnapped in Iran from where he was brought to Pakistan to give a false confession presumably, Faisal alleged.

Jadhav, the latest flash point in the tensions between Pakistan and India, was sentenced last month. On May 8, India moved the ICJ against the death penalty, alleging violations of the Vienna Convention on Consular Relations. On May 9, the highest court in the UN gave Jadhav a temporary lease of life by requesting Pakistan not to act in such a way as to render infructuous any decision the court may take in the matter.

India, in its appeal to the ICJ, had asserted that Jadhav was kidnapped from Iran where he was involved in business activities after retiring from the Indian Navy. India denies that he has any connection with the government.

Pakistan claims to have arrested Jadhav from its restive Balochistan province, where it says he was liaising with Balochi separatists on behalf of the Indian intelligence agency, R&AW.

Precedents galore but no enforcement

The ICJ is the UN court for resolving disputes between nations, and its decisions are final and binding. However, it has no means to enforce its rulings and they have occasionally been ignored.

In a similar dispute over the Vienna Convention in 1999, the ICJ ordered the United States not to execute a German national who did not get proper consular assistance, but the man was put to death regardless.

After a 2004 ruling against the United States in a case brought by Mexico, the administration of then-President George W. Bush ordered reviews of dozens of cases of Mexicans on US death row who had not been offered consular access as a remedy.

The US Supreme Court later ruled that under the US federal system, individual states are not obliged to comply with the international treaty, a contradiction that has yet to be resolved.

With inputs from PTI and Reuters