The PDP also expelled eight party leaders who met the delegation of foreign envoys today, saying that they had "violated the will of the people".

A view outside the hotel on banks of Dal Lake where the envoys held meeting with politicians, journalists and members of civil society. Photo: The Wire

Srinagar: Diplomats from 15 countries on Thursday visited the summer capital Srinagar to “assess” the situation in the region post the scrapping of J&K’s special status on August 5.

Led by US ambassador to India, Kenneth Juster, the Delhi-based envoys were on a two-day visit to the newly-created union territory of Jammu and Kashmir. This is a first visit by foreign envoys to the restive region in the past five months since Article 370 was scrapped.

The group was flown in by a special chartered plane from Delhi to the technical airport on the outskirts of the city this morning. Their first stop was the headquarters of Indian army’s 15-Corps at BB Cantonment in the city where top army official briefed the foreign delegation about the situation.

Also read: Envoy’s Programme Was Drawn up Based on Threat Perception: MEA

Then, the venue shifted to a posh hotel on the banks of Dal Lake in the afternoon where the envoys met politicians, civil society members and journalists. The area around the venue was put on high alert and contingents of police and CRPF patrolled the roads leading to the venue.

A group of nine Kashmir-based politicians had a luncheon meeting with the visiting diplomats for more than an hour. Just adjacent to the hotel is the state guest house where former chief minister Omar Abdullah has been detained for the last few months. 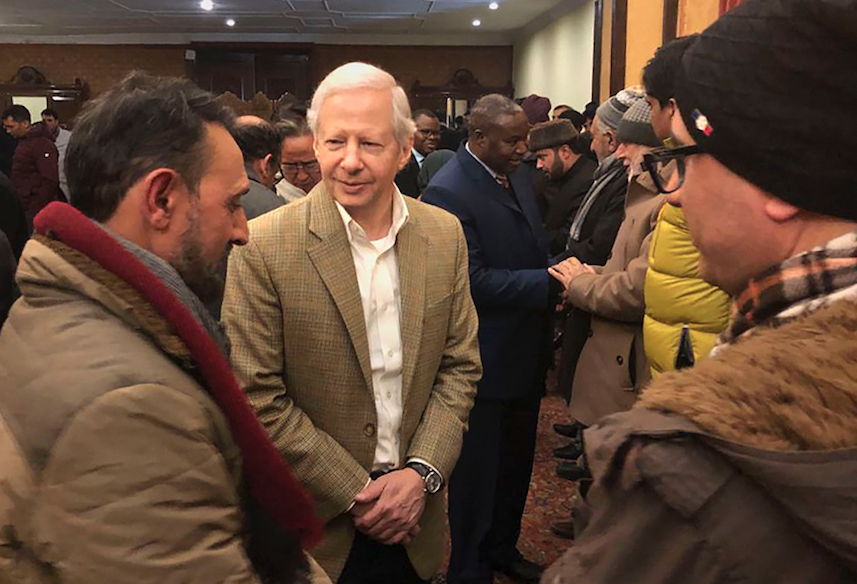 “We discussed the situation in Kashmir post abrogation of Article 370 and told the delegation the move (to scrap Article 370) was neither expected by people nor did they want it to happen,” said G.H. Mir, chairman, Democratic Party Nationalist, who was part of the political delegation.

But, he hurried to add that the credit goes to government of India, which “managed” the abrogation of Article 370 without any violence. He also gave the people of Kashmir credit for not opting for violence.

During the meeting, Mir said they also talked about apprehension among the people of J&K about losing jobs and land to “outsiders” after the government of India scrapped Article 35A – the constitutional provision which barred people from outside from owning property or applying for jobs in J&K.

“We urge that the government take measure to allay these fears,” said Mir.

On Tuesday, Bukhari led an eight-member group of Kashmiri politicians to a meeting with the J&K Lieutenant Governor, G.C. Murmu, opening a formal channel of communication with the Centre’s representative in J&K and break “political logjam” in the Valley after August 5. The group is believed to be working to form a new political party in Kashmir.

The National Conference, Peoples Conference and other smaller parties did not meet the visiting diplomats.

A PDP politician said the group also raised the issue of the continued detention of politicians and told the visiting delegation the move was “hurting democracy” in Kashmir.

“There can be different political opinions but that doesn’t mean they (the government of India) will keep these politicians in jail for none of their crimes,” said the politician.

The PDP also expelled eight party leaders who met the delegation of foreign envoys today, saying that they had “gone against the will of the people” by collaborating with the centre, NDTV reported.

“In view of the developments post-August 5 and the unilateral move of the government of India that has violated the will and hurt the sentiments of the people, it has come to our attention that certain party leaders have been part of the parleys that go against the interests of the state, official position and core beliefs of the party,” the Mehbooba Mufti-led party said in a release.

Around 30 political leaders including three former chief ministers, Farooq Abdullah, Omar, and Mehbooba Mufti have been under dentition since August 5.

“We discussed the release of the political leaders was a prerequisite for the resumption of any political activity in Kashmir,” said the PDP member.

Senior journalist, Majid Hyderi who was part of a group of media persons which met the envoys, said he apprised them about the “reality” of Kashmir. “They listened to me patiently,” said Hyderi.

An official said around nine journalists were part of the group that met the delegation for an hour to discuss the Kashmir situation.

Though some civil society members also met the envoys, a group of youth said they were not allowed to meet them. “We were invited for the meeting in the morning, bust despite waiting for two hours the police didn’t allow us to enter the hotel,” said Mudasir Aziz, Chairman of Kashmir Youth Power, an NGO.

Later in the afternoon, the foreign group to Jammu. The delegation will hold separate meetings with politicians and members from civil society there before flying back to Delhi on Friday.

Media reports said the envoys from the European Union (EU) countries refused to be part of the delegation unless they were allowed to meet the three former chief ministers as well.

Last October, a foreign delegation, comprising members of European Parliament, mostly right-wingers, visited the Valley after August 5. The visit ran into controversy after media reports said it had been arranged to project normalcy in Kashmir.