While the Japanese prime minister was vocal about Russia, the Indian side kept its neutral stance in public, omitting any direct reference to Ukraine when referring to the unacceptable use of force to reach a solution. 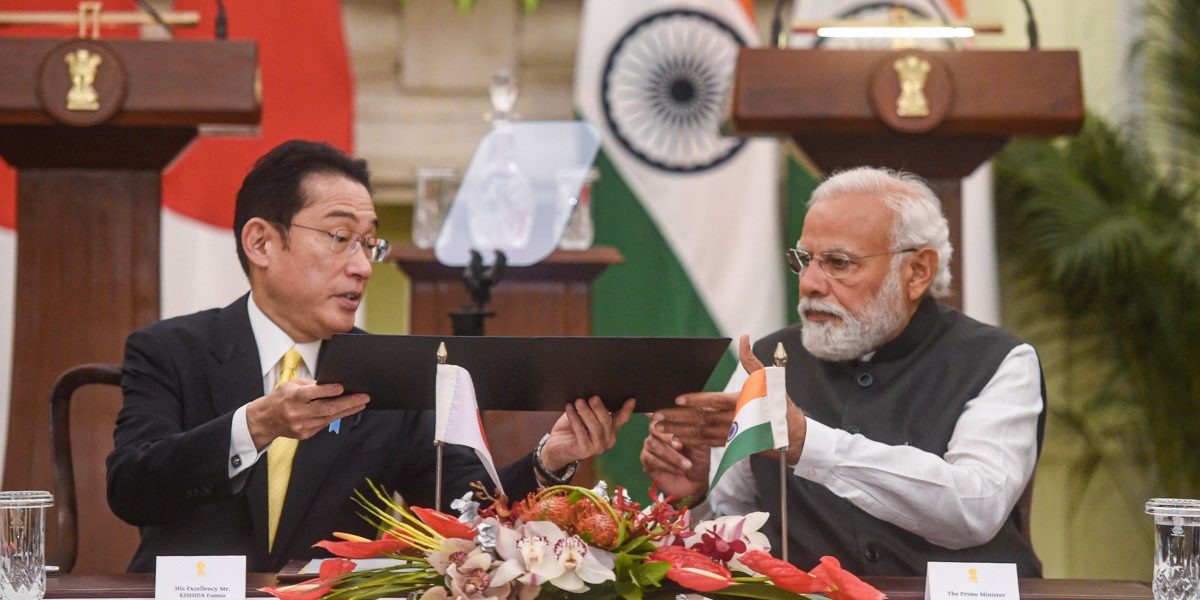 Kishida arrived on Saturday afternoon for a short visit, the first by a head of government to India this year. This was also the first India-Japan bilateral summit in four years.

After two hours of talks in New Delhi on Saturday evening, the two leaders emerged to announce that Japan had offered new public and private investment and financing of $42 billion in India over the next five years.

But their talks were overshadowed by the spectre of the Russia-Ukraine war. The Japanese foreign ministry’s press secretary, Hikariko Ono, told reporters that “most of the time was spent on discussing the Ukrainian situation”.

Japan and India are part of the Quad grouping with Australia and the United States, aiming to have a common policy on the Indo-Pacific. Out of them, India has been the only country to have not criticised Russia and has even started to purchase heavily-discounted Russian crude, with international oil prices rising relentlessly. Tokyo will host the first in-person Quad leaders’ summit in May.

Even before he landed in India, Kishida had underlined that the key priority of his agenda was to convey to the Indian leadership that the “unity of the international community” was essential.

After the talks, Kishida asserted that he had reached an understanding with his Indian host over Ukraine.

“We (Kishida and Modi) confirmed any unilateral change to the status quo by force cannot be forgiven in any region, and it is necessary to seek peaceful resolutions of disputes based on international law,” he said at the joint press appearance after their two-hour-long summit meeting, as per Reuters.

At a late-night media briefing, a senior Japanese government spokesperson insisted that the two countries were on the same page. “After the lengthy and in-depth discussion (on Ukraine), the two leaders agreed on the following four points,” said Ono.

She claimed that the first ‘point’ was “that any attempt to change status quo by force cannot be accepted anywhere in this world”. “Second is that we should seek the peaceful resolution of the conflict and the third point (that) the two countries would jointly tackle the situation for the immediate cessation of violence and breaking of deadlock.”

The fourth point of agreement is that the two countries will jointly support humanitarian assistance to Ukraine and neighbouring countries.

While the Japanese prime minister was vocal about Russia, the Indian side kept its neutral stance in public, omitting any direct reference to Ukraine when referring to the unacceptable use of force to reach a solution.

The Indian prime minister did not mention the Ukraine crisis in the joint media appearance. Further, the joint statement issued after the talks did not even name Russia while referring to the violence in Ukraine.

When asked about the discrepancy, Ono said the understanding over the four points were reached at the discussions on Saturday, while the joint statement had been negotiated and agreed upon much earlier.

In a separate briefing, Indian foreign secretary Harsh Shringla summarised the broad contours of the discussion on Ukraine. “Essentially, the prime ministers expressed their seriousness of the ongoing conflict and the humanitarian crisis in Ukraine, assessed its broader implications, particularly for the Indo-Pacific region. They emphasised that the contemporary global order had been built on the UN Charter, international law and respect for sovereignty and territorial integrity of states,” he said.

Echoing the words in the joint statement, Shringla asserted that the two leaders underscored the importance of safety and security nuclear facilities in Ukraine and acknowledged the active efforts of IAEA.

This was clearly a nod to Kishida’s homegrown priorities. “As a prime minister from Hiroshima that was badly devastated at the end of second world war, he (Kishida) said that any nuclear threat, let alone its use, cannot be tolerated,” Ono explained.

Shringla had concluded that the two leaders called for an immediate cessation of violence and agreed to take appropriate steps to address the humanitarian crisis in Ukraine.

Besides Ukraine, the senior Indian diplomat revealed that India briefed the Japanese prime minister about the situation in Ladakh, where the Indian and Chinese militaries have been at a stand-off for nearly two years at the Line of Actual Control. Shringla reiterated that India had conveyed that unless the situation at the border was restored, India could not take a “business as usual” attitude with Beijing.

In the joint statement, the leaders emphasised that India and Japan, as two leading powers in the Indo-Pacific region, had a shared interest in the safety and security of the maritime domain, freedom of navigation and overflight, unimpeded lawful commerce and peaceful resolution of disputes.

“They reaffirmed their determination to continue prioritising the role of international law, particularly the United Nations Convention on the Law of the Sea (UNCLOS), and facilitate collaboration, including in maritime security, to meet challenges against the rules-based maritime order in the East and South China Seas,” the statement said.

They emphasised the importance of non-militarisation and self-restraint.

“They further called for the full and effective implementation of the Declaration on the Conduct of Parties in the South China Sea and the early conclusion of a substantive and effective Code of Conduct in the South China Sea in accordance with international law, especially UNCLOS, without prejudice to the rights and interests of all nations including those not party to these negotiations,” it said.

On the economic front, Kishida announced plans to invest 5 trillion yen ($42 billion) in India over five years. India signed agreements with units of Japan’s Suzuki Motor for an investment of around $1.4 billion to produce electric vehicles and batteries in Modi’s home state Gujarat – also involving a vehicle scrappage scheme – but it was not clear if this was part of the 5 trillion yen total.

Japanese foreign direct investment into India has mainly been in the automobile, electrical equipment, telecommunications, chemical and pharmaceutical sectors. Since 2000 investments into India have been around $27.28 billion.