The external affairs minister made these remarks while answering a question during a joint press interaction with Russian foreign minister Sergei Lavrov in Moscow. 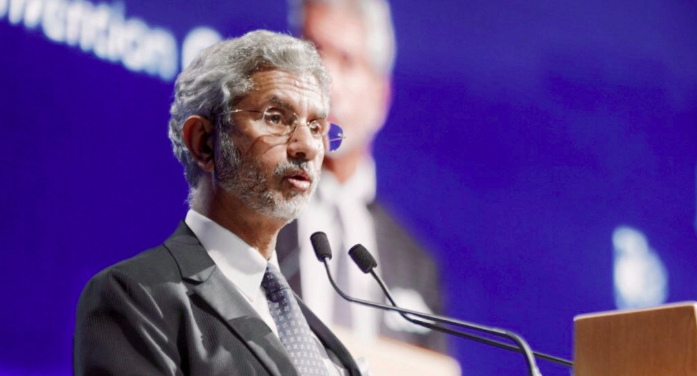 New Delhi: Even as the Taliban makes more territorial gains while peace talks remain in cold storage and foreign troops leave, India’s external affairs minister S. Jaishankar stated that the “legitimacy aspect” of who should rule Afghanistan should not be ignored.

On Friday, the Taliban claimed that that they were in control of 85% of Afghanistan, including a key border town, Islamic Qala, which is near Iran. The Taliban’s announcement came hours after US President Joe Biden stated that US military withdrawal will be completed by August 31.

Jaishankar made these remarks while answering a question during a joint press interaction with Russian foreign minister Sergei Lavrov in Moscow on Friday.

Incidentally, the claim about controlling 250 of Afghanistan’s 398 districts was made by a Taliban delegation which was in Moscow to meet with senior Russian officials while the Indian minister was in town.

Stating that India is “concerned about the direction of events”, Jaishankar noted that while in other conflict-prone countries, the citizens were left to “work it out”, a similar scenario could not be applied to Afghanistan.

“But Afghanistan is a different case, because for more than 30 years, there have been international conferences, formats to discuss how to stabilise and bring about peace in Afghanistan as it has proven implications for regional peace and stability,” he said.

Jaishankar asserted that the key priority right now “must be a reduction in violence”.

In answer to the question about India’s position on Taliban possibly grabbing power through military means, he stated, “End of the day, who governs Afghanistan has a legitimacy aspect to it and that is something that should not be ignored.”

In contrast to India, Russian foreign minister Lavrov answered that it was only the Afghan people who could decide if they could tolerate the current situation.

From India’s perspective, Russia’s approach in Afghanistan has created a conundrum, primarily due to its outreach with Pakistan and the Taliban. Russia has also been seeking the expedited withdrawal of US-led foreign troops, while India had remained wary of creating a security vacuum that could foster terror groups on Afghan soil.

Over the continuing violence, Lavrov said, “Clashes are of great concern as the situation may spill across the border into our allied countries. Taliban movement is now in control of borders with Iran, Tajikistan.”

Lavrov ruled out Russia intervening to stop the violence in Afghanistan, besides calling for talks. “As far as it is happening within Afghanistan, we won’t be doing anything. We will be calling time and time again on all the Afghan people to start the talks.”

In his opening remarks, Jaishankar also said that he shared Lavrov’s views on the Indo-Pacific.

Russia has vocally disagreed with the entire Indo-Pacific concept, which is centre-stage to New Delhi’s membership of the so-called ‘Quad’. Lavrov had even stated that India had been co-opted into the ‘Quad’ by the US to act as an anti-China club.

In his speech delivered at a think-tank a day earlier, Jaishankar sought to portray the Indo-Pacific concept as a reflection of the changes in political and economic power equations, which need to be acknowledged.

“Both our interests and our reach today extend well into the Pacific. Our major partners are located there, and indeed, cooperation with the Russian Far East is one notable example. The reality is that there is a vast global commons whose safety, security, ecology, environment and activities are increasingly a shared responsibility,” he said at the Primakov Institute of World Economy and International Relations.

Jaishankar suggested that common ground for India and Russia to work together in the region was “our shared belief in the centrality of the ASEAN”.

With Russia moving closer to China and India having found common cause over Indo-Pacific with the US, New Delhi and Moscow have, according to some observers, drifted apart.

The message from Jaishankar through his speech at a Moscow think-tank and in talks with Russian interlocutors was that any bilateral anxiety over forging new friendships is a part of the new geopolitical reality, but it shouldn’t lead to turning a blind eye to the “sensitivities” of an older strategic partner.

Jaishankar’s wide-ranging talks with Lavrov ranged from the management of and recovery from the COVID-19 pandemic and strategic regional issues to cooperation in nuclear and space realms.

The minister claimed that the core of the “contemporary relationship is the embrace of multi-polarity, both as a reality and as an aspiration”.

Making a case for widening “options” for partners beyond their relationship, Jaishankar asserted, “The operating principle of a multi-polar world is the legitimate pursuit of flexibility without seeking exclusivity.”

However, he cautioned that the “grammar of multipolarity” was different from a world dominated by two superpowers.

Jaishankar noted that one apprehension would be about rubbing against each other’s core national interests as the two countries look outwards. “A key concern even while widening options is to ensure consistent sensitivity to the interests of a critical strategic partner.”

He felt that the success of India-Russian ties was a “deep sense of consideration for each other”, which should be maintained in the future. “Mutual interest mandates that this continues to be so between India and Russia.”

From Moscow, Jaishankar is travelling directly to the former Soviet province of Georgia. This is the first visit by an Indian foreign minister to Georgia since its independence in 1991. He will be handing over holy relics of a Georgian queen that were brought to India in the 17th century.

Russia’s relations with Georgia have been testy, with its Western leaning and interest in joining NATO. Georgia has also accused Russia of fostering separatism in two of its provinces, South Ossetia and Abkhazia.

In 2008, Russian troops had entered Georgia to throw out Georgian military troops that had attempted to reclaim control over South Ossetia. Moscow recognises both these provinces as sovereign nations.

Earlier this year, Lavrov had visited India in April for two days, following which he travelled directly to Islamabad.