But dismisses calls for taking on US' burden of financial obligations or higher emission reductions. 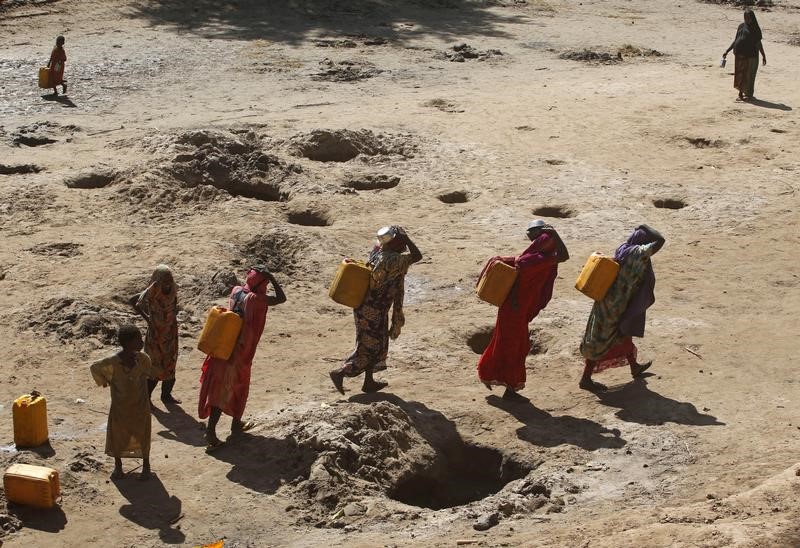 Women carry jerry cans of water from shallow wells dug from the sand along the Shabelle River bed, which is dry due to drought in Somalia's Shabelle region, March 19, 2016. REUTERS/Feisal Omar/Files

New Delhi: India will abide by its existing commitments under the Paris Agreement despite the US President Donald Trump pulling out from the global climate change pact.

But, the government will resist any attempt by other developed countries to push emerging economies to partly fill the gap that US’s exit causes in the international effort under the agreement.

A senior Indian official involved in the climate negotiations told the Business Standard, “India will stand by the agreement and meet its INDCs (intended nationally determined contributions) regardless of what other partner countries do.”

INDCs refer to the commitments a country made under the Paris Agreement when the deal was signed in 2015. India had committed to reducing the greenhouse gas intensity of its emissions by 33-35% by 2030 below 2005 levels, build 40% of its power capacity by 2030 through renewables and create an additional carbon sink of 2.5 to 3 billion tonnes of CO2 equivalent through additional forest and tree cover by 2030.

“The US had informed at the recent G7 meeting that it would soon take a call on the Paris Agreement. We assess that if the US wishes to pull out it would do so before the next G20 meeting in early July. At the G20 talks there is likely to be collective talks for enhancing financial contribution by developed countries to the fight against climate change. A clean walk-out from the Paris Agreement would ensure no one can corner US to agree to such joint statements,” the official said.

Within the climate change circles, countries have already been calibrating themselves for a while in anticipation of US receding from the Paris Agreement.

“There have already been discussions. From some quarters we have heard calls that India and China should ‘step-up’ to fill the void. This is wholly illogical and against all principles of equity and fairness. India has already taken on ambitious targets, much beyond its fair share,” said the official who was part of some of these parleys.

The suggestions have been that India and China should also necessarily contribute to the international climate funds – something that the Paris Agreement makes mandatory for developed countries and leaves to the discretion of developing countries.

This is besides the push that has always existed for countries to up their emission reduction targets under the INDCs in 2018 when a stock-taking exercise is to be undertaken under the Paris Agreement and the UN Framework Convention on Climate Change. This push by some quarters, particularly the EU, is expected to get more vehement, observers in India think.

“The US had taken paltry emission reduction targets under Paris Agreement to begin with and is still far from fulfilling its obligations against global climate funding. If it now recuses itself one cannot fairly require developing countries to shoulder the obligations of the country which is the most responsible,” said the official.

There have been informal talks within the Indian government about whether India should also contribute to the Green Climate Fund. But officials in charge of negotiations warn that India is already investing in South-South Co-operation on climate change and the developed countries are yet to provide the monies for the Fund. India and China had fought together along with other developing countries at the Paris talks in 2015 to ensure the mandatory contribution to such funds comes only from rich countries, as required by the parent UN Framework Convention on Climate Change (UNFCCC). US and the EU had tried hard to breach this firewall as well.

In terms of optics the large emerging economies are clearly going to gain from a US walk out. China is reported to soon make a joint announcement with the EU confirming its commitment to the Paris agreement – scoring a point against the US. But whether even China is willing to take on US’ burden in real terms would only be visible in the actual climate negotiations that go on periodically behind closed doors and are often at variance from the optics that either countries makes or the global civil society present.

The agreement requires even a country announcing its exit to stay in the negotiations for four years. The only way US could completely step out of the negotiations would be to rescind its ratification of the mother UNFCCC, which it has not even hinted at obliquely so far. Instead, the US could pare down its commitments under the Paris Agreement. That would still give it a central negotiating role in the agreement as the rules for the compact are finalised over the next two years. To understand the actual implications of US’ probable exit on the functioning and future of Paris Agreement and on the financial and technological flows in the market that shapes the global climate change fight, one would have to wait and read the fine print of President Trump’s likely announcement.