Has Modi Learnt to Play Trump Better? A Look at Possible Deliverables Beyond Motera

The Indo-US agenda is vast – there are issues to be clinched, points to be clarified and misunderstandings to be cleared. 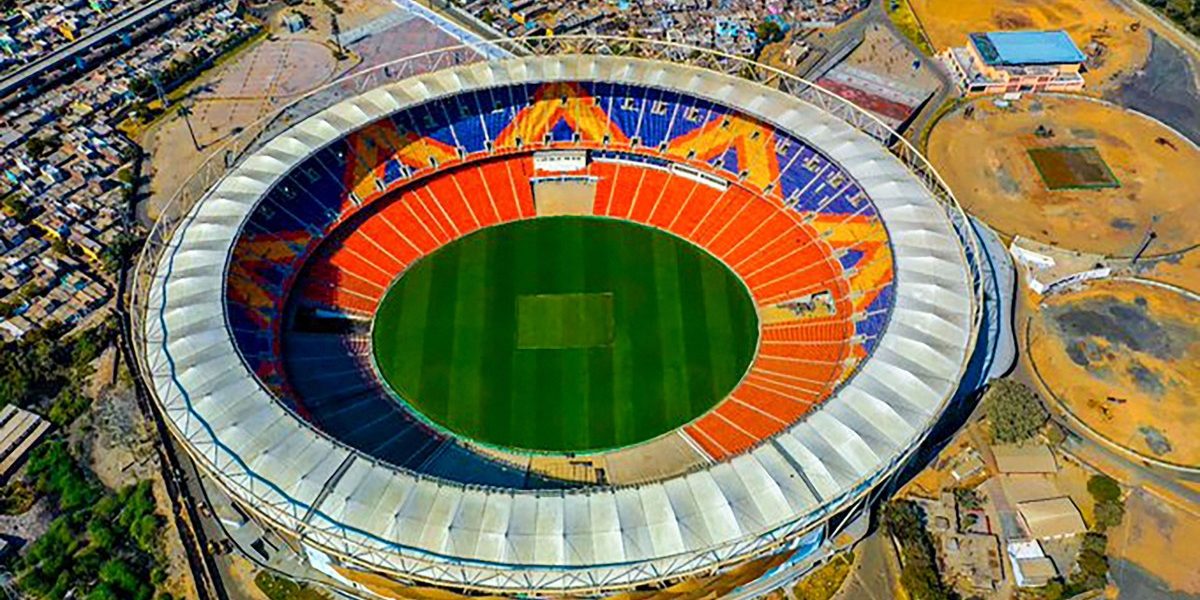 Briefing the media a few days ago, “government sources” said that the massive roadshow along the way from Ahmedabad airport to the Motera stadium and the joint rally there with Prime Minister Narendra Modi is the “key deliverable” of President Donald Trump’s visit to India on Monday and Tuesday.

The very next sentence in the report seems to suggest that the source was no less a person than foreign secretary Harsh Shringla who was damping down suggestions that the visit would be of little consequence since the bilateral trade deal was stuck.

Despite being the “key deliverable”, it is now clear that the Motera rally is not an official event. It has been organised by a hastily raised entity called the Donald Trump Nagrik Abhinandan Samiti (DTNAS). Indeed, it could well be that foreign secretary Shringla is the inspiration behind the ‘Namaste Trump’ event, just as he was of the ‘Howdy Modi’ event in Houston last year.

If so, he deserves credit for getting India the undivided attention of the US president for around 36 hours. Considering Trump’s refusal to be the chief guest for Republic Day 2020, perhaps the promise of a “10 million audience” in the “world’s largest stadium” was the only sales gimmick that would work.

Also read: A US-India Trade Deal Can Only be Sealed if Both Move Past Clearly Defined Red Lines

Having got the Great Salesman, Chief Law Enforcement Officer, and President of the United States to India, the challenge is to also get something out of him. As things stand, Trump alone seems to be the gainer, playing up to an audience of Indians who have a significant diasporic presence – some 800,000 of the 2.4 million Indian Americans are Gujarati. The biggest concentration of them are in the true blue state of New York.

Indo-US relations have gathered a great deal of steam in recent years and so, hopefully, New Delhi is also mixing a lot of business with pleasure. The Indo-US agenda is vast – there are issues to be clinched, points to be clarified, misunderstandings to be cleared and so on. Given the imperial presidency that Trump has rolled out, the president has the ability to not just deliver on issues, but, if whimsy strikes him, to even overturn previous decisions. Of course, this cuts both ways, and presumably this is the reason for New Delhi’s caution in not over-selling the deliverables and concentrating on keeping Mogambo happy.

Playing up arms purchases, such as the one for 24 MH-60R medium lift helicopters for the Navy and six Apache attack helicopters for the Army, seems to suggest that they are being offered as payback for Trump having condescended to visit India. Usually, purchases and presidential visits do not coincide. Note, however, the acquisitions are not sops, they are desperately needed by our armed forces. But if New Delhi can kill two birds with one stone, why not?

Besides, there are matters relating to our common interests in security in the Indo-Pacific region. Then, there are those involving our growing defence industry ties. Besides, it is in the interest of the two countries to discuss regional issues, or, perhaps, the global distemper. Surely, there could be some deliverables there.

The lack of a trade deal hides a larger reality – that India simply lacks the kind of clout that gains Trump’s attention. Even though its trade with the US is handsome by our standards, it pales into insignificance when compared to that between the US and China. So, too, the deficit which is now merely $13 billion, as compared to $345 billion between China and the US. India may offer to make up some of its deficits by buying more weapons, chicken legs and dairy products, but compare it to China’s commitment to buy $200 billion worth of products over the next two years as per its Phase I deal with the US. That’s something for Washington to salivate over, even if it looks like an improbable target.

So, it is not surprising that we are unable to influence the US agenda, whether it relates to trade, Afghanistan or Russia. We were unable to deflect the US duties on steel and aluminium in March 2018, or its decision to deny India preferential access to its markets under the GSP scheme. To add insult to injury, on the eve of the presidential visit, the US Trade Representative decided to remove India from the list of developing countries who benefit from US tariff preferences in relation to countervailing duties. The US contended that India is a G-20 member which does not really deserve the category of being called a “developing country.”

There is, however, a greater congruence between India and the US in areas beyond trade. It is one that is spurred by a common concern on the need to check China. The US realises notwithstanding what it considers New Delhi’s pusillanimity, that India is the only country in terms of location, size and economic potential that can balance China. As for India, the growing gap in the comprehensive national power of China and India makes it imperative for us to call on Uncle Sam to maintain the balance. 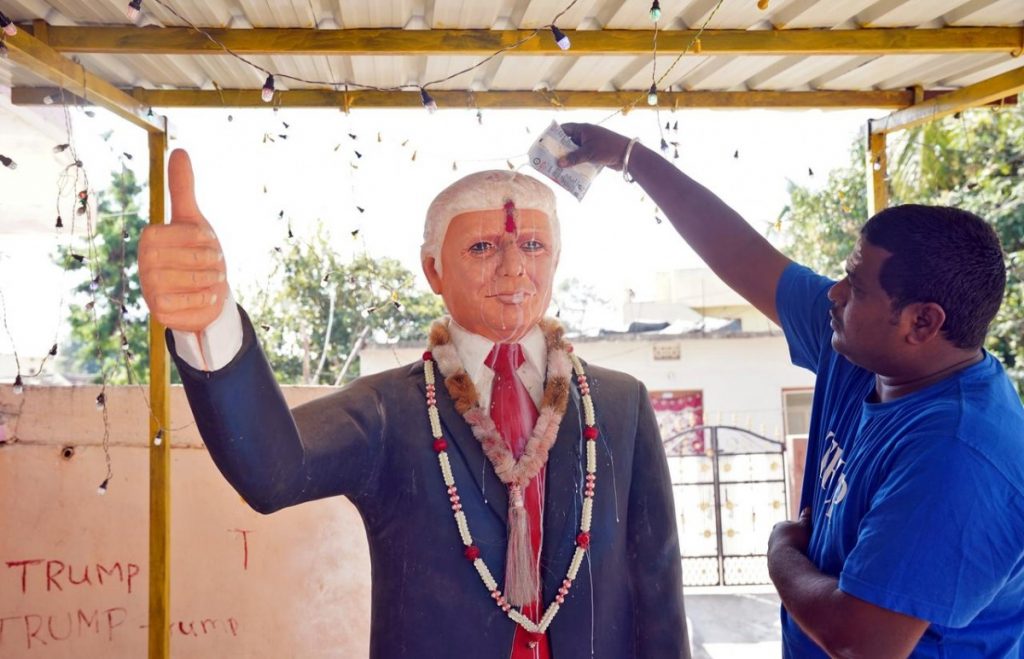 Bussa Krishna, a fan of US President Donald Trump, offers prayers to a statue of Trump at his house in Konney village in Telangana, February 14, 2020. Photo: Reuters/Vinod Babu

Our role in the Indo-Pacific, our desire that the US take on board our security concerns in the western Indian Ocean are all matters of ongoing discussion and are being addressed, if only incrementally.

An important Indo-Pacific concern relates to Sri Lanka where the US-Sri Lankan estrangement could have negative consequences for India. The Sri Lankan unhappiness over the denial of a visa for its army chief could have the net effect of benefiting Beijing at the cost of both India and the US.

Of immediate interest to both India and the US are developments in Afghanistan and Pakistan. India needs to get a clearer idea of just how the US plans its Afghan end-game. Perhaps New Delhi is not too keen to discuss Afghanistan. There have been suggestions, perhaps inspired by the US, that India take up some of the burden by placing boots on the ground in the war-torn country. This is a non-starter in a country whose military has, with its declining budgets, to deal with internal challenges in Kashmir, guard a disputed border with China and undertake a long-delayed restructuring and modernisation exercise.

Had it been another president, the prime minister could, perhaps, have taken up a discussion on the need to revitalise the WTO and the world trading system. This would probably enrage our guest who believes the US has been tricked by countries like China and India into giving needless concessions by the WTO.

There are other regional issues – India’s ties with Iran, with Russia and so on. But it is unlikely that New Delhi would like to engage Trump on them. They would prefer to deal at a lower level through Secretary of State Mike Pompeo or/and Defence Secretary Mark Esper.

In the case of Russia, India remains in the cross-hairs of CAASTSA on account of its continuing high-value arms purchases from Moscow. Perhaps a good quid-pro-quo could have been the discussion of American purchases along with the compulsions for the Russian ones. Or at least an effort to get a presidential commitment for a waiver from US sanctions, which still hangs over the Russian deals.

There will, of course, be official level talks as well as one-to-one discussions between Modi and Trump. Given the way Trump works, it would be difficult to predict anything here.

But having gone through a period of estrangement with the US president between November 2017 and his re-election in May 2019, Modi has learnt to play Trump better. Hopefully this will yield some more deliverables than the tamasha in Ahmedabad.