Why India Should Be Wary of the Quad

Like it or not, the term 'Indo-Pacific' seems to be a means of including India in the military calculations of US strategy in the Pacific. 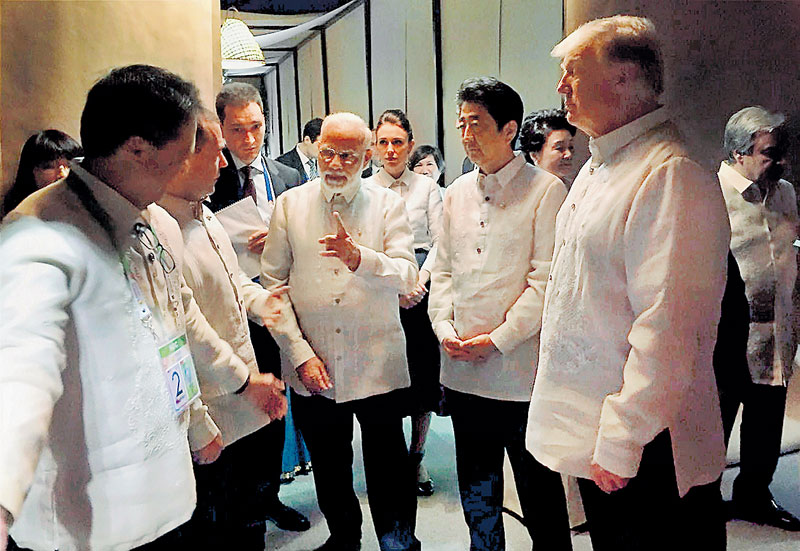 The second coming of the Quadrilateral alliance of the US, Australia, Japan and India to confront China in the Asia-Pacific may not be the proverbial farce, but it is close enough.

The first time around it collapsed when two of its members found it inconvenient to go ahead. And now, after a decade, in which China has militarily consolidated itself in the very region that the Quad had hoped to challenge, the chimera is once again being chased.

Mooted as an alliance of democracies, it seeks to upend everything we know about international relations, where the drivers are national interests, rather than values. Even that titanic struggle against evil in World War II, pitted a partial democracy (the US), an empire (the UK) and the communist Soviet Union against the Nazis and the Japanese militarists.

Ordinarily this would not matter much since the Quad would largely be a talking shop with some joint naval exercises thrown in. But parallel to this, US President Donald Trump and his Secretary of State Rex Tillerson have drawn up an overarching vision of the policy they have in mind to replace the now abandoned “pivot.” They are pointedly wooing New Delhi into what could well be a military alliance. Trump’s effusive remarks about India and the pointed re-christening of the Asia-Pacific region as the Indo-Pacific are the soft sell. Like it or not, or hide it or not, the term now seems to be a means of including India in the military calculations of US strategy in the Pacific.

In Manila for the ASEAN anniversary and East Asia summits, the leaders of the four countries met each other individually while their officials will convene separately as the Quad. Clearly, there is some amount of caution in not provoking a hostile response from Beijing, whose response has actually been fairly mild. Following the meeting of officials, the Indian foreign ministry spokesman said that “a free open, prosperous and inclusive Indo-Pacific region serves the long-term interests of all countries in the region and the world at large.” But some nuances were visible as the Indian statement avoided mention of the North Korea issue, while the US, Australian and Japanese ones focused on it.

It was during Tillerson’s visit to India on October 25-26, that Alice Wells, the acting assistant secretary of state for South Asia, told accompanying reporters that Washington was “looking at a working level quadrilateral meeting in the near term.” The idea was to bring together countries that share the same values “to reinforce those values in the global architecture.” She, of course, denied that the idea was aimed at China, through she did say that it would “coordinate” efforts of countries seeking infrastructural development through means that “don’t include predatory financing or unsustainable debt (read: China’s Belt and Road Initiative).

A couple of days earlier, Japan’s foreign minister Taro Kono, had proposed reviving the forum, something he said he had discussed with Tillerson and his Australian counterpart Julie Bishop at the sidelines of a meeting in Manila in August. The purpose of the idea, Kono said, was to seek a peaceful maritime zone from Asia to Africa. Essentially, it meant the introduction of Australia into the US-Japan-India trilateral, which has been functioning for a while.

Japanese Prime Minister Shinzo Abe first pushed the idea in 2005 with a view to developing a broad front to balance China shortly after first coming to power that year. When anti-Japanese demonstrations hit China in 2004-5, Tokyo was shocked. It had for long assumed that Chinese animosity towards Japan for its World War II atrocities had been smoothened by the substantial economic aid that Japan had given China in the 1980s and 1990s, and the massive trade between the two. But the Chinese had merely been biding their time.

As for the US, it first mooted the “pivot to Asia” strategy to rebalance 60% of its naval assets to the region. It sought to buttress this with the Trans Pacific Partnership (TPP). Despite initiating the move to re-establish the Quad and change the nomenclature of Asia Pacific to “Indo Pacific” it’s not quite clear how Trump will operationalise his policy. Would it mean a more muscular set of freedom of navigation operations (FONOPS) in the South China Sea? And how would it differ from Obama’s pivot, which has already been undercut by the US abandonment of the TPP?

India was leery of the Quad the first time around, but now it says it would be ready to discuss the new terms of engagement for a revival of the proposal. This time around, the Japanese, invigourated by the victory of Abe in the recent elections, have said they would take the initiative to promote substantive cooperation between the countries in defence, maritime security and infrastructure development. Tillerson has also indicated that the Quad would also seek to promote a rival project of connectivity and infrastructure development that would not be predatory and unsustainable.

The first Quad foundered as Australia peremptorily walked out and India followed suit. This was coincidentally around the time of the 2007-2008 economic crisis that saw Chinese economic power go up several notches and the initiation of a phase of military assertion by the Chinese across the board – in the Senkaku islands and on the Sino-Indian border.

At the public level, everyone says that China is too big to be contained. But that cannot negate the nature of international politics, which is based on maximising national, rather than collective gain, and the relentless pursuit of national interest without any special regard to values and principles. No matter what Japan, India, the US and Australia say, the name of the game today is containing China. There is nothing particularly sinister about this. China has not shown itself to be a power that is peaceful or restrained. It has taken recourse to threats and bullying at the drop of the hat. Note the manner in which it sought to browbeat Bhutan on the Doklam issue, penalised South Korea for deploying the THAAD and pushed South-East Asian nations on the basis of its nine -dash line maritime boundary, which has no basis in international law.

The question is whether the Quad process is based on an honest assessment of the challenge, and an equally honest commitment of all those involved. Australia’s history is well known. In the late 1980s, when Prime Minister Paul Keating was asked who he would side with in the event of a Japan-US trade war, he said Japan. Given the country’s economic profile, it is not surprising that he said so, but the same logic holds for the country’s trade with China. Australia is much more economically dependent on China than the other three countries of the Quad. As for Japan, it still has a significant “peace” constituency which could very easily change course once Abe is gone.

In many ways, India and Japan are the frontline where China is concerned, but would a Quad mean that they would support each other militarily were their respective disputes to heat up? Actually, it is difficult to see Japan removing its eye from the issues in the East China Sea and the Sea of Japan.

And what about the US? For all its talk of the “Indo-Pacific”, it refuses to associate with India on issues relating to the Arabian Sea and the Persian Gulf, two of the most important external areas for India. Shorn of the rhetoric, Indo-Pacific merely means an Indian military commitment to the US-led alliances in the Pacific Ocean. There is no reciprocal US commitment to issues of Indian concern relating to Pakistan and the dangers arising out of the highly volatile environment in the Persian Gulf area which the US has helped create.

There is a broader issue here as well. Where the US seems to have lost its vision in the mindlessness of “America First”, China has categorically laid out its ambitions for the next 30 years. By 2035, it aims to become a global innovation leader and remove poverty totally from the country, and by 2050, an overall global leader and “a great modern socialist country.” For this, China has laid out a grand plan that it is pursuing and is offering its model of a single-party authoritarian state as against the multi-party liberal democratic model which, to go by the experiences of the UK and US, is clearly faltering.

The only power that can effectively balance China is the US and the world can’t be sure where it’s headed. Even with its great endowments and abilities, the current situation in the US does not generate much confidence. Unlike the seemingly united and aggressive posture that China is taking, there is an intense and almost violent conflict of ideas within the US about who and what America is all about. In such circumstances, it would be hazardous to depend on the US for an effective leadership of the coalition needed to balance China.