India, US Agree That 'Gains of Last 18 Years' Must Be 'Preserved' in Afghanistan

Washington and New Delhi had earlier not been seeing eye-to-eye over the talks between the US and the Taliban in Doha. 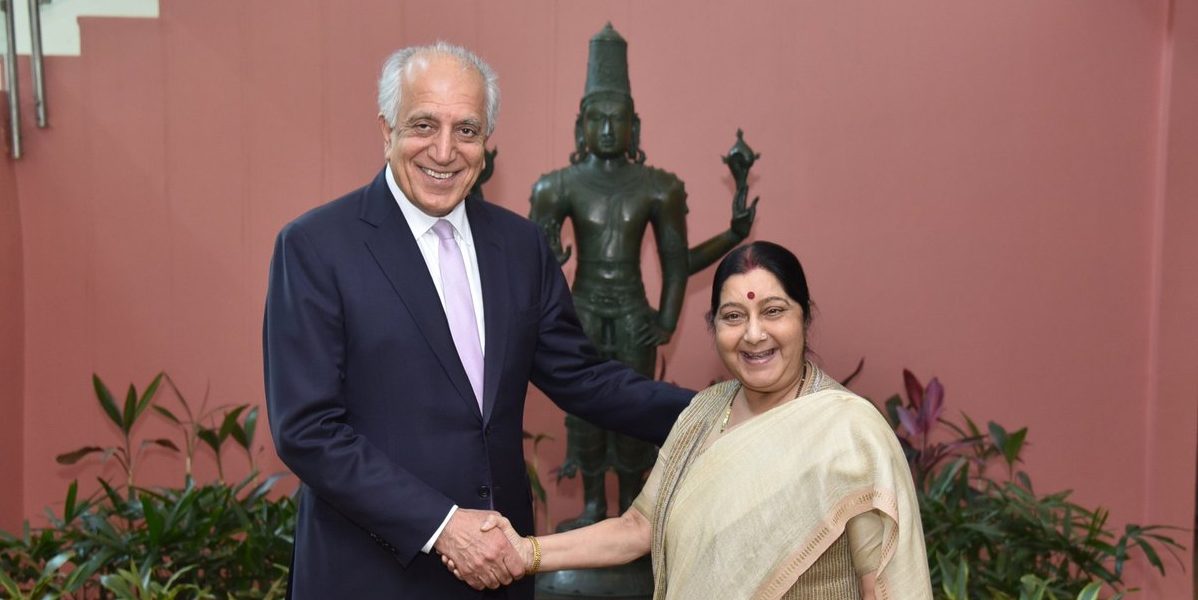 New Delhi: India and the United States have apparently agreed, during the visit of US special representative for Afghan reconciliation ambassador Zalmay Khalilzad, that gains of the “last 18 years” must be preserved.

Washington and New Delhi have not been seeing eye-to-eye over the talks between the US and the Taliban in Doha, with the latter worried that Kabul would be left out and given a fait acompli outcome for implementation.

Khalilzad had arrived in Delhi on Monday and met with external affairs minister Sushma Swaraj, national security advisor Ajit Doval and foreign secretary Vijay Gokhale. His short visit to the Indian capital came in the midst of an ongoing round of talks with the Taliban, which began on May 1.

Appreciate Amb @US4AfghanPeace Khalilzad briefing EAM @SushmaSwaraj on peace efforts in Afghanistan in midst of ongoing Doha meetings. Both discussed role of all regional stakeholders in bringing peace & development in Afghanistan. India will work with key partners in days ahead. pic.twitter.com/Sw78HuV4xa

There were no discussions held on May 6, as it was the first day of Ramzan. Khalilzad departed for Delhi on Tuesday morning and joined an hour of talks before they adjourned late afternoon.

A US embassy statement, reiterated by Khalilzad on his personal Twitter account, noted that the envoy and his Indian hosts “agreed that Afghan gains of the last 18 years must be preserved and built upon”.

4/5 As the world’s oldest & largest democracies, we agreed that the gains made in the last 18 yrs should be preserved. We also agreed that Afghanistan’s political future is for Afghans to decide through an inclusive and legitimate process.

When Khalilzad had been last in Delhi in January, his interlocutors had told him had any peace agreement with Taliban had to safeguard Afghanistan’s “political and constitutional structure”. Further, Indian officials had informed Khalilzad that they did not favour “interim arrangements”. This was a reference to the widely-held view during that period that the US and Pakistan were pushing to form an interim government that included the Taliban, much to the discomfit of the Ashraf Ghani government and its key regional ally, India.

The right noises seem to have been made during Khalilzad’s second Delhi trip this year, with both sides concurring that “Afghanistan’s political future is for Afghans to decide through an inclusive and legitimate process”.

Taliban has so far refused to start direct intra-Afghan talks with the Afghan government. A planned visit of an Afghan delegation last month collapsed after the Taliban objected to the inclusion of Afghan government officials.

According to the US statement, Khalilzad and his counterparts discussed “the many important benefits that peace would bring, including: preventing International terrorist use of Afghanistan as a platform for attacks; improved prospects for regional peace and security; and increased regional connectivity and trade”.

On April 26, the US state department had stated that the Taliban had committed to “fight ISIS and cut ties with Al-Qaeda, ETIM, and other international terrorist groups”.

A month before the state department statement, foreign secretary Gokhale had met with Khalilzad in Washington. During that meeting, Khalilzad had responded to a question from Gokhale and told him that the counter-terrorism assurances from Taliban would include terror groups targeting India.

However, the Taliban is currently pressuring the US for a committed timetable for the withdrawal of American troops. This has become a difficult negotiation, with the US officials pressing Taliban to start intra-Afghan talks and discuss a permanent ceasefire, even as violence continued to escalate.

On May 3, a loya jirga conveyed by Afghan president Ghani had called for an “immediate and permanent ceasefire”, starting with Ramzan. Taliban rejected the offer.

“Ambassador Khalilzad will continue to consult with Indian counterparts as the peace process moves forward,” said the US embassy statement.