In a talk that was described glowingly by both parties, Russian foreign minister noted that he had not seen any "fluctuations or changes" from Russia's "Indian partners and friends". 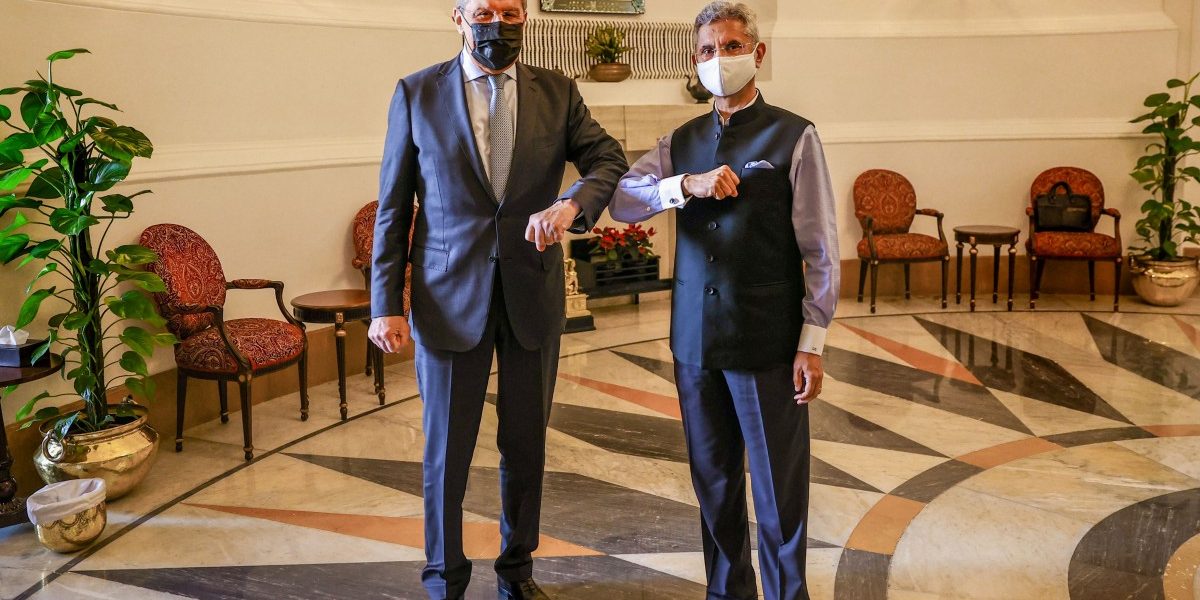 New Delhi: Asserting that he did not see any “changes” in “Indian partners” due to pressure from the United States, Russia’s foreign minister Sergei Lavrov said on April 6 that he held discussions with his counterpart in New Delhi on manufacturing Russian defence equipment on Indian soil.

Lavrov was in Delhi for a brief working visit during which he held talks with Minister of External Affairs S. Jaishankar. After a joint press conference, the Russian delegation left for Islamabad in the afternoon.

After deterioration in ties over alleged election meddling and invasion of Crimea, the US has targeted Russia’s cooperation with other countries in the defence and security sectors.

The new Biden administration has cautioned that the Russian delivery could trigger sanctions under the Countering America’s Adversaries Through Sanctions Act (CAATSA).

Noting that the US has “overtly” discouraged Russia’s international defence sales, Lavrov stated that this was not discussed during his talks with Jaishankar. “We did not discuss these statements from the USA, instead we confirm that we are going to deepen our military cooperation,” he said in answer to a question at the press conference.

He also stated that both of them had “also discussed the prospect of additional manufacturing of Russian military equipment in India within the concept of ‘Made in India’.”

“So here I didn’t feel any fluctuations or changes from our Indian partners and friends,” he added.

Jaishankar appended that there was no “specific discussion” on buying more Russian defence equipment. “That is the responsibility of a different body which is headed by our defence ministers which are due to meet at the end of the year,” he said.

The visit by Lavrov takes place essentially to set the broad agenda for the leaders’ summit later this year.

“Our countries have a particularly privileged strategic partnership. They are based on the long-term friendship of our peoples, the closeness of positions on current international issues,” he said in his opening remarks.

The Indian minister also described the discussions as having been “very warm”, “comprehensive”, and “very productive”.

However, he had a slip of the tongue when referring to the quality of the relationship. “Time-tested is a frequently used and clearly justified description of India-US relations,” Jaishankar said, instead of ‘India-Russia relations’ in the written statement.

With Lavrov putting Pakistan on his travel schedule, the situation in Afghanistan was never far from the discussion table.

Jaishankar stated that they “spent some time” to discuss the developments around Afghanistan. “I shared our approach that  durable peace there would require harmonising interests of all, both within and around that country. The peace process must be based on foundational principles to which we all subscribe. And a political solution should mean an independent, sovereign, united and democratic Afghanistan”. 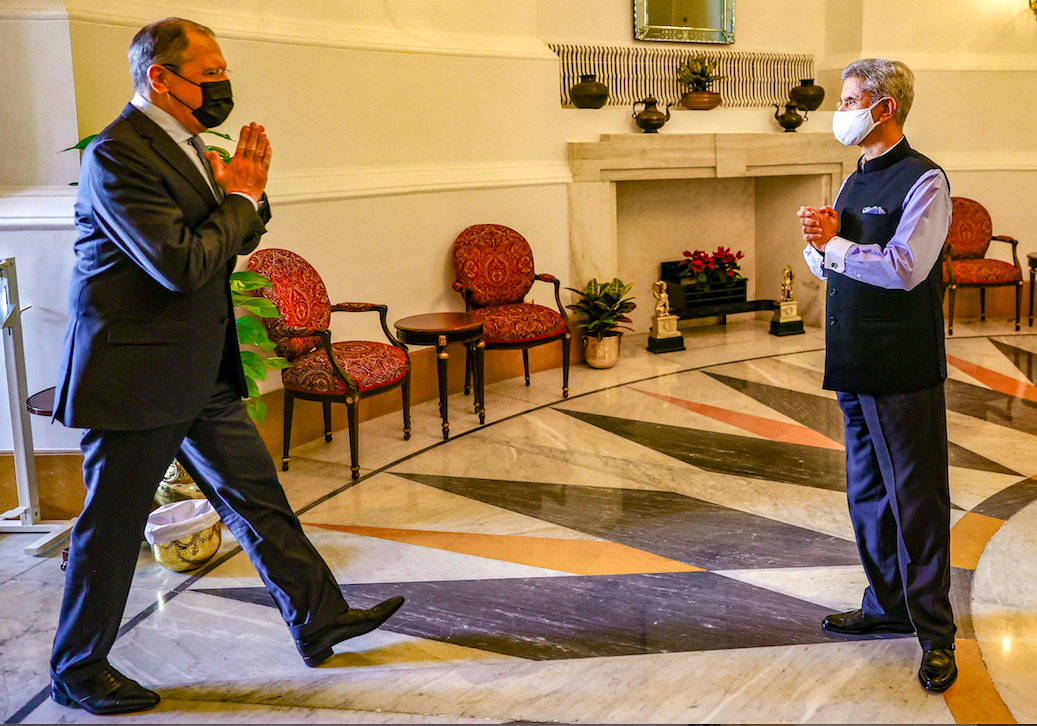 On a question about Russia’s position on the inclusion of Taliban in the Afghan peace process, Lavrov stated that the Taliban is a “part of Afghan society and decisions on the settlement in Afghanistan should foresee the participation of all political, ethnic and religious groups in Afghanistan, otherwise, it won’t be stable”.

He noted that this “settlement should reflect a balance of interests of all political, ethnic and religious groups, including their representation in governing structures”.

Lavrov expressed hope that the agreement signed between the previous US administration and the Taliban would be “implemented”. “It created a window of opportunity to reach an agreement between all the hostile parties. It would be sad if it breaks”.

As per the Doha agreement, all US troops are supposed to leave Afghanistan by May 1. There is speculation that the US may seek an extension of the deadline once the intra-Afghan talks begin in Turkey this month, as part of the roadmap proposed by the new US administration. India, unlike Russia, would prefer the US military presence to remain longer in Afghanistan.

Lavrov added that Russia would welcome consultations on how to “reinforce” a domestic peace agreement with confidence buildings measures involving Afghanistan’s neighbours. “We always say that neighbours and all powerful actors in the region should set up conditions for the Afghan population to agree domestically”.

He also claimed that the “Moscow format” of talks was the “best way forward” to find a political settlement.

When asked a question as to whether Russia and China were moving towards a military alliance, he denied it. But Lavrov also made his opposition to the ‘Quad’ known through a side-attack.

He replied that China-Russian relations were “highest in history”, but did not have a goal of forging a military union.

“By the way, I have heard speculation of military alliance not only in regarding with Russian-Chinese relations but also alliances being promoted such as ‘middle east NATO’. We also heard about ‘Asian NATO’,” he said.

Russia has been highly critical of the Indo-Pacific concept advocated by United States. Lavrov had also last year stated that India was being wooed by the West to join the “anti-China” camp through formats like the ‘Quad’. Last month, the leaders of the four ‘Quad’ countries, US, India, Japan and Australia had held their first summit.

Lavrov said that this issue was part of the discussions. “We share a common stance with our Indian friends that this would be counterproductive. We are interested in inclusive cooperation that is for something, not against somebody.”

Jaishankar said that India shared the view-point that contemporary challenges require countries to work together in new and different ways, when it came to the Indo-Pacific. “Such cooperation also reflects the multi-polar and rebalanced character of global politics. India is strongly committed to ASEAN centrality and this is underlined by the Indo-Pacific Oceans Initiative that it has been advocating at the East-Asia summit. As we implement our Act East and Beyond policy, Russia is a very important partner. Whether it is their Far East or whether it is the Chennai-Vladivostok Corridor”.

With the COVID-19 pandemic surging through India in a second wave, the Indian minister noted, “We have a Russian vaccine under discussion for production in India”. He said the decision had to be taken by regulatory authorities.

“For us, were those vaccines to be made in India, it would be one more affirmation of the importance of made in India and our own vaccine capacities,” he said.

He also did not rule out the possibility that the Bharat Biotech vaccine made in India, Covaxin, could be manufactured in Russia. “I do not exclude (the scenario) that further cooperation could cover the manufacturing of the Indian vaccine in Russia. I guess the experts are supposed to discuss this and to assess the efficiency of such a cooperation,”