In toto, nine inter-governmental agreements and 19 commercial pacts were signed during the visit. New Delhi: Humanitarian aid will be provided immediately to Afghanistan, and the war-ravaged nation should not be allowed to become a safe haven for global terror groups, Indian Prime Minister Narendra Modi and Russian President Vladimir Putin agreed at their annual summit on Monday.

The annual summit between India and Russia was held after two years due to the COVID-19 pandemic. Last time, Modi had visited Vladivostok to take part in the summit in September 2019.

Ahead of the summit, the first-ever ‘two plus two’ dialogue between the two countries’ foreign and defence ministers was held in the morning.

The Russian president arrived in the evening and went straightaway to Hyderabad House, where Modi received him. After formal talks that lasted for 3.5 hours, followed by a dinner, Putin left immediately on his official plane. Indian officials underlined that this was Putin’s second visit abroad since the start of the COVID-19 pandemic.

In toto, nine inter-governmental agreements and 19 commercial pacts were signed during the visit.

A substantive part of the joint statement dwelled on the situation in Afghanistan, where Russia and India have had differing perceptions on the extent of engagement with the Taliban.

According to the document, the discussion on Afghanistan revolved around the “security situation and its implications in the region, the current political situation, issues related to terrorism, radicalisation and drug trafficking etc.”.

India has offered to send 50,000 metric tonnes of wheat to Afghanistan via Pakistani territory. Pakistan has agreed to allow Afghan trucks to transport Indian wheat, but the modalities are still being worked out.

The Russian and Indian leaders also emphasised that “Afghanistan’s territory should not be used for sheltering, training, planning or financing any terrorist groups including ISIS, Al Qaeda, LeT etc.”.

The specific mention of a Pakistan-based group, Lashkar-e-Tayyabba, in the bilateral document follows the absence of any explicit reference to such terror groups targeting India in the trilateral joint statement between Russia, India and China last month.

The joint statement also said that both countries had common priorities in Afghanistan:

The two leaders also praised the establishment of a permanent consultative mechanism on Afghanistan between the security councils. They also announced the finalisation of a “Roadmap of interaction between India and Russia on Afghanistan, which symbolized convergence of views and interests of the two Sides”.

At a media briefing, Indian foreign secretary Harsh Shringla said that the subject of “legitimisation” of the Taliban’s de-facto government “did not come up”.

Russian foreign minister Sergei Lavrov also told reporters that the Taliban had to still “keep their promises” to form an inclusive government representing all ethnic and political forces.

He also said that India could be a part of the ‘extended troika’ on Afghanistan. “We told [our Indian colleagues] how the extended Troika on Afghanistan – Russia, China, the US and Pakistan – operates. As far as we are concerned, there is every reason to engage countries such as India and Iran in the group’s activities.” 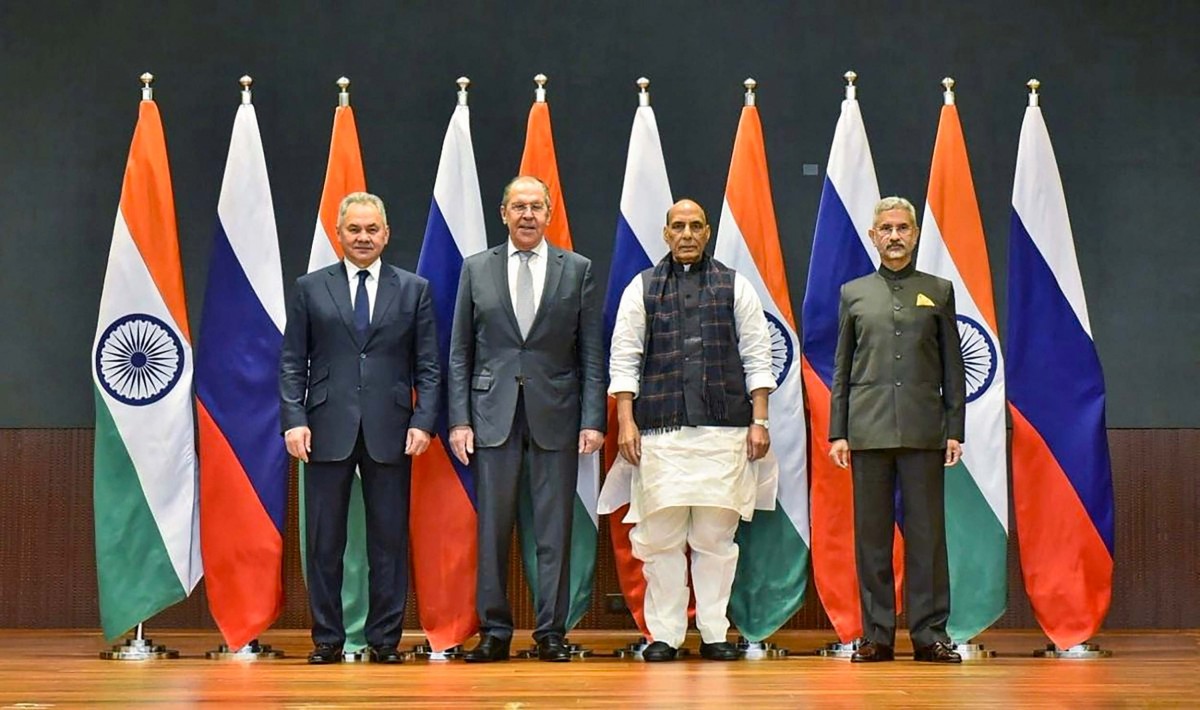 On another contentious international hotspot, Lavrov also repeated Russia’s concerns about the ‘Quad’ and the formation of the AUKUS security alliance in the Indo-Pacific.

“We will do everything possible to resist such Indo-Pacific ploys, and Indo-Pacific strategies, [like] AUKUS and other opaque formats, bloc-like formats, from actually trying to marginalize ASEAN and ASEAN-centric structures that have been created here over the past decades,” Lavrov said, as quoted by Russia’s state news agency, TASS.

The ‘bloc-like formats’ is an apparent reference to the ‘Quad’ grouping formed by US, India, Australia and Japan, which has a professed aim for a ‘free and open’ Indo-Pacific.

Lavrov claimed that India has “distanced itself distinctly” from AUKUS, the security partnership formed between the UK, US, and Australia to develop nuclear submarines in the region. “[The Indians] are emphasizing in every way their interest in economic, transport and infrastructure projects of this group…I think that this Indian position explains to a sizable extent that the military component of the US strategy was moved into the AUKUS format.”

India has only stated, so far, that the AUKUS alliance has “no relevance” for the functioning of the Quad.

Also read: With None of the Earlier Fanfare in Sight, India Resumes COVID-19 Vaccine Exports

The differences in approach between India and Russia were apparent in the joint statement, which skipped the term ‘Indo-Pacific’. Instead, there was a reference to the phrase “in the regions of Indian and Pacific oceans”.

The joint statement stated that the emerging regional security should be “free, open, transparent and inclusive”, based on universally recognised principles of international law. India and Russia also highlighted their convergence on the importance of ASEAN centrality in the regional architecture.

Shringla stated that India’s security concerns, “including in Indo-Pacific”, were discussed during the ministerial dialogue. He added that India called for greater cooperation from Russia in the Indian Ocean region.

Earlier, the Indian prime minister congratulated Russia for becoming an observer at the Non-Aligned Movement and a dialogue partner at the Indian Ocean Regional Association. “It was our pleasure to support Russia’s presence in both these forums,” Modi said.

As an example of Indo-Russian cooperation in the Indian Ocean, the Indian foreign secretary pointed out that the detailed projected report of the Vladivostok Chennai maritime corridor was nearing completion.

To question whether the military stand-off with China was mentioned during the meeting, Shringla answered that all of India’s “security concerns” were raised. “I can’t say more than that.”

Earlier, defence minister Rajnath Singh had talked of “unprovoked aggression” in the northern border in his open remarks at the ministerial summit – an unmistakable reference to the 1.5-year-old military stand-off between the Indian and Chinese armies at the Line of Actual Control (LAC).

On the defence front, two agreements were signed for manufacturing AK-203 rifles in India and a ten-year extension to the military-technical cooperation.

In his opening remarks, Putin noted that Russia collaborates with India in the military field “in a way that we do not work with any of our partners”. “I mean that together we are engaged in the development of high-tech military products and production, including in India,” he said.

However, there was no signing of the military logistics agreement between India and Russia. “The issue of RELOS (Reciprocal Exchange of Logistics) is being put off for some time,” Shringla said.

The joint statement merely noted that both sides “recognized the requirement of an institutional arrangement for reciprocal provision of logistic support and services for the Armed Forces”.

The Indian foreign secretary also told reporters that supplies of Russia’s S-400 missile defence system “have begun this month and will continue to happen”.

The United States has cautioned that sanctions could be invoked under the Countering America’s Adversaries through Sanctions Act due to purchasing Russian defence systems.

Lavrov described the S-400 deal as “not only symbolic but also pragmatically significant for ensuring India’s defence potential”.

Shringla observed that there was a “sense that s-400 is a legacy contract going back to 2018 and discussed before that”. He also stated that the issue of US sanctions through CATSAA “was not discussed”.

“On all issues with other countries, whether it is us (India) or Russia, we conduct an independent foreign policy,” he asserted.

The joint statement dedicated a substantial portion on the economic aspect of the partnership, which has lagged compared to the defence and political relationship.

Last year, the total trade had fallen to $9.31 billion. It has picked up in the first nine months of 2021, but it remains to be seen if the bilateral trade figures will touch the pre-pandemic high of $11.16 billion in 2019.

“The leaders stressed on the need for greater efforts to achieve the trade target of USD 30 billion by 2025. In this regard, they placed strong emphasis on new drivers of growth for long-term cooperation,” said the joint statement.

Modi invited Russian investment in India’s energy and steel sector. He also noted that both sides have agreed to a target of $50 billion in two-way investment in four years.