India issued a statement that it wants clarifications on key proposals, as well as on reports “that controversial elements have been appointed by Pakistan to a committee to be associated with the Kartarpur corridor”. 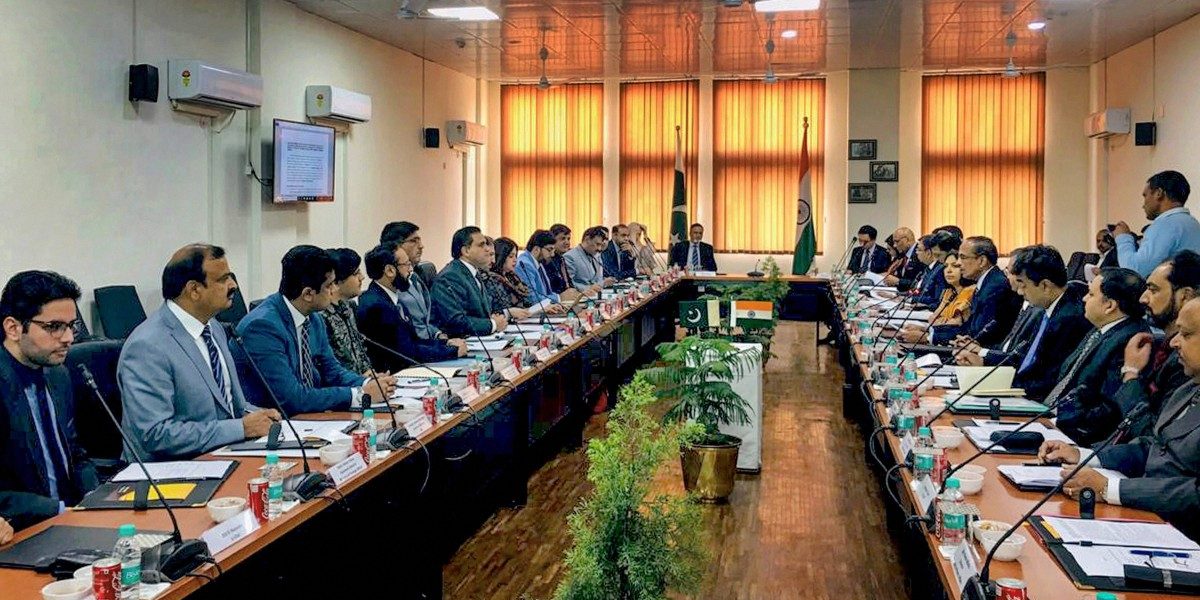 Indian and Pakistani officials at the bilateral meet to discuss the Kartarpur corridor at the Attari-Wagah border in Attari on March 14, 2019. Credit: PTI

New Delhi: The scheduled meeting on April 2 on the Kartarpur Sahib corridor has been postponed, with India stating that next meeting on the modalities can only be held after Pakistan responds to Indian concerns about nomination of known Khalistani exponents in a government-appointed committee.

Last year, India and Pakistan had agreed to establish a trans-border, visa-free corridor between Sikhism’s two most important shrines to mark the 550th anniversary of Guru Nanak this year.

After the last meeting to discuss the modalities on March 14 at Attari, the joint press release issued by India and Pakistan had stated that the next meeting would be on April 2 at Attari. But with five days left, India has effectively pulled the plug.

On Friday, India issued a statement that it wants clarifications on key proposals, as well as on reports “that controversial elements have been appointed by Pakistan to a committee to be associated with the Kartarpur Corridor”.

Two days earlier, Pakistan’s federal cabinet announced that the Pakistan Sikh Gurudwara Prabandhak Committee (PSGPC) had been reconstituted. As per Pakistani media reports, the main task of the committee would be to “facilitate the scheduled opening of the Kartarpur corridor between Pakistan and India in November this year”.

The name which first caught the eye of officials was that of Gopal Singh Chawla, whom Indian sources describe as a “close aide of terrorist Hafiz Saeed”. Besides, sources also noted that four others, Bhisen Singh, Kuljit Singh, Maninder Singh and Taru Singh, were also problematic.

The Pakistan deputy high commissioner was called to South Block on Wednesday morning to receive these “concerns”, along with the underlying message that the scheduled meeting on April 2 is being postponed.

“It has been conveyed that the next meeting on the modalities can be scheduled at an appropriate time after receiving Pakistan’s response,” said the press release issued by Ministry of External Affairs.

Pakistan foreign ministry spokesperson Mohammed Faisal tweeted that the “Indian decision to postpone” the meeting was regretted.  “Last minute Postponement without seeking views from Pakistan and especially after the productive technical meeting on 19 March is incomprehensible,” he posted.

#Pakistan regrets the Indian decision to postpone the upcoming #Kartarpur meeting, jointly agreed by both sides on 14 March 2019. The meeting was to discuss & find consensus on outstanding issues.
(1/2)

India and Pakistan had held a technical level meeting on March 19 at the zero point on March 19.

New Delhi has proposed to hold another meeting of technical experts in mid-April to “resolved outstanding issues” and “to take forward the infrastructure development for the corridor”.

When sources were asked whether India will go ahead with another meeting even if Pakistan doesn’t remove the objectionable name, official sources did not want to speculate on the next steps. “We shouldn’t pre-judge Pakistan’s response. Let’s wait for it,” they said.

While Gopal Singh Chawla’s history is well known, sources were not as forthcoming about the charges against the other four names. They, however, added that they were known to have “propagated hatred and violence”.

Also read: Kartarpur Sahib: A Journey of a Lifetime

Officials stated that the appointment of these “anti-India elements” put a question mark on Pakistan’s intention”.

“India has made amply clear in the (March 14) meeting and draft agreement that Kartarpur Sahib Corridor shall not be misused for any anti-India propaganda and activities,” they said.

Sources asserted that there will be no compromise on security concerns.

Even after the de-escalation in military posture following the Indian airstrikes and counter-reaction from Pakistan, tensions remain between South Asia’s two largest countries.

India had announced a boycott of Pakistan’s national day celebrations and urged invitees to turn back from the gates of Pakistan high commission. However, Pakistan prime minister Imran Khan claimed to have received a letter from his Indian counterpart Narendra Modi expressing best wishes. Indian sources, however, asserted that it was just an unsigned, customary letter.

Pakistan has also figured high in the election campaign of the Indian ruling party, with Modi largely canvassing only on national security platform by highlighting the airstrikes in his rally speeches.

Following the last meeting, the two sides had agreed that the basic identification document for pilgrims would be the passport. Pakistan had also agreed on India’s insistence that the Kartarpur Sahib corridor would be open to pilgrims of all faiths.

However, there is still substantial differences left. Pakistan has still not agreed to allow pilgrims with OCI cards to use the corridors. There is also disagreement on the number of pilgrims that will be allowed and that days that it will remain open.

India wants the corridor to cater to around 5000 pilgrims per day, while Pakistan wants to cap the number at 500. Pakistan would also like to transport the pilgrims on four wheels, while India would like a provision for pilgrims to travel by foot.

Indian officials had also sought for the corridor to remain open round the clock, while Pakistan would like to restrict it to special days. “Pakistan had also wanted to have a special permit regime with fee, which we strenuously objected,” said officials.