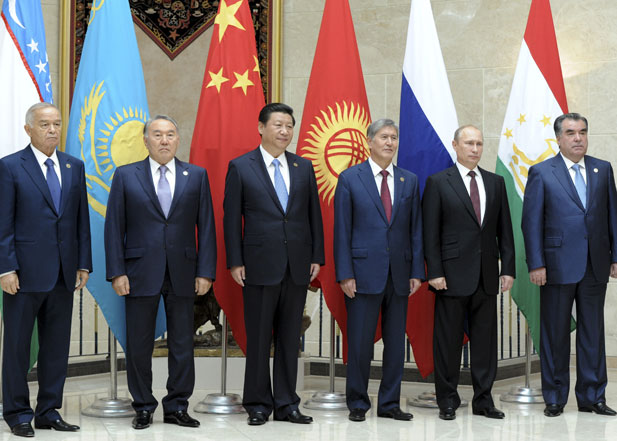 Heads of state pose for a picture before a session of Shanghai Cooperation Organization (SCO) summit in Bishkek, September 2013. Credit: Reuters/RIA Novosti

Beijing: India and Pakistan’s admission as full members to the Shanghai Cooperation Organisation (SCO) will be formalised at the political and security grouping’s summit in Kazakhstan next week, China announced today, while hoping that they would “strictly follow” its charter.

Chinese foreign ministry spokesperson Hua Chunying hoped that the admission of India and Pakistan as full members would help improve their bilateral relations.

“Hope India and Pakistan strictly follow the charter of the SCO and the idea of good neighbourliness, uphold the SCO spirit, improve their relations and inject new impetus to the development of the SCO,” Hua told a media briefing here.

She confirmed that the lengthy process of their admission into the group, which took years until China gave its nod, was over and the two countries would become full members at the grouping’s summit to be held in Astana, the capital of Kazakhstan, on June 8-9.

Besides Chinese President Xi Jinping and his Russian counterpart Vladimir Putin, Prime Minister Narendra Modi and his Pakistani counterpart Nawaz Sharif are expected to be present at the summit.

Speculation is also rife that Modi and Sharif may also meet on the sidelines of the summit.

“The member states of the SCO are accelerating the MOU procedures with the two countries and everything is going very well,” Hua said.

Founded in Shanghai in 1996, the group at present comprises China, Kazakhstan, Kyrgyzstan, Russia, Tajikistan and Uzbekistan. It mostly acts as a China-dominated security group specially focussing on Central Asia.

India and Pakistan till now had the status of observers along with Afghanistan, Belarus, Iran and Mongolia in the grouping.

In the 2015 summit in Ufa in Russia, the group had formally adopted a resolution which started the procedure to admit India and Pakistan into the SCO.

Both the countries signed a Memorandum of Obligations to join the organisation in last year’s summit in Tashkent.

Russia has pushed for India’s membership into the grouping in the last few years while China backed the entry of its ally Pakistan.

The first ever expansion of the group comes at a time Indo-Pak tensions are high and relations between Beijing and New Delhi were beset with strains over the $50 billion China Pakistan Economic Corridor (CPEC).

Beijing also has not shown any signs to relent on its stand to block India’s admission into Nuclear Suppliers Group (NSG) and the UN ban on JeM leader Masood Azhar.

The SCO becomes one platform for the leaders of the three countries to meet. India and China are already members of BRICS, (Brazil, Russia, India, China and South Africa). The 9th BRICS summit would be held in Chinese city Xiamen in September this year.

SCO focussed its attention in combating terrorism in Central Asia and specially at the borders of Xinjiang, China’s Uygur Muslim province where Beijing is battling against separatist East Turkistan Islamic Movement (ETIM).

“Now the member states of the SCO are accelerating the legal process on the MOU implementation. Everything is going on smoothly. Now the SCO will complete the first membership expansion since its establishment. It will become regional organisation with largest coverage involving the biggest population” with the admission of India and Pakistan, Hua said.

The population of China and India, the world’s most populous countries, will help to make it an international grouping covering largest population.

Hua said in the UFA summit of the SCO in 2015, the member countries of the SCO had launched the process to accept the membership of India and Pakistan.

The SCO is mainly aimed at military cooperation between the members and involves intelligence – sharing, counter-terrorism operations in Central Asia.