Nepal foreign minister Pradeep Gyawali stressed on the fact that building and nurturing trust “is absolutely essential” for the health and harmony of relations between the two countries. New Delhi: After holding formal talks, Nepal foreign minister Pradeep Gyawali on Friday reiterated that it wants to start a “conversation” on solving the outstanding territorial dispute in order to instil “greater degree of trust and confidence” in the relationship.

The Indian read-out of the talks only mentioned that border management among the slew of topics that were discussed during the day. The Nepali foreign ministry’s press release, however, claimed that the meeting “discussed boundary matter and expressed the commitment to early completion of the boundary works in the remaining segments”.

Later, at a speech at MEA’s think-tank, Indian Council of World Affairs, Gyawali stressed that building and nurturing trust “is absolutely essential” for the health and harmony of the relations.

“In this spirit, we desire to start the conversation with a view to resolving the question of boundary alignment in the remaining segments. Many of you may be aware that Nepal and India share over 1,800 km long international boundary most of which is jointly mapped. Only in the stretches of some kilometres, the work remains to be completed,” he stated.

The Nepali leader stated that if the boundary alignment in the remaining segments is settled, it would help “help generate positive vibe in public sentiment as well as help instil [a] greater degree of trust and confidence in bilateral relations”.

At the same time, he added that both sides have “shown wisdom that despite the difference in one area, the momentum of our overall engagements is continued”.

“We are also mindful that we should not let any outstanding issue between us be there forever and become irritant in an otherwise friendly relationship,” added Gyawali.

During a question and answer session, Gyawali recounted that India and Nepal had already produced 182 strip maps of the boundary, except for Susta and Kalapani segments.

He added that there was a discussion on the “mechanism” to resolve this outstanding issue, but did not elaborate further.

The Nepali foreign minister’s visit takes place after relations had gone downhill over the disputed border territories in the past year. Prime Minister K.P. Oli, who came to power on a platform of Nepali nationalism, had aggressively raised the border dispute since India had released the political map of the newly formed Jammu and Kashmir and Ladakh Union Territories in November 2019.

Indian officials had pointed out that the country’s official political maps had always incorporated the territories of Kalapani, Limpiyadhura and Lipulekh.

Nepal wanted immediate foreign secretary-level talks with India, but New Delhi demurred, pointing out that there was a change in personnel at the post.

There was another jolt to the relations when the Nepali parliament changed its constitution to include a map with the disputed territories, after India had opened a new road to Lipulekh on the Indo-China border. 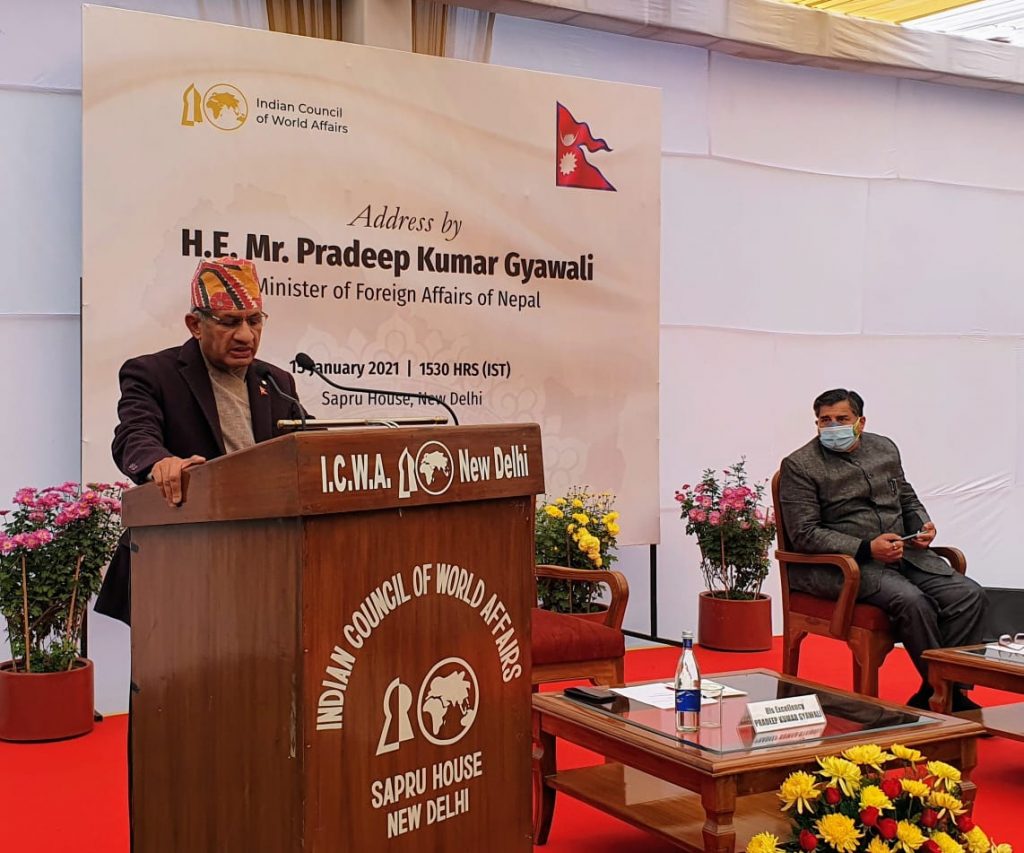 India had cited the COVID-19 pandemic as a key reason for not having talks on the boundary issue, but had also put the onus on Kathmandu to create the “right atmosphere”.

Following the Nepali prime minister’s phone call to his Indian counterpart Narendra Modi to convey wishes for Independence day, there was a slow thaw in tensions, with a series of Indian officials visiting Kathmandu in past few months of 2020. In December, Indian foreign secretary Harsh Vardhan Shringla visited Nepal.

Nepal is also in the midst of tumultuous political changes after the House of Representatives was dissolved on the recommendation of Prime Minister Oli.

Also Read: We Will Get Territories Back From India: Nepal’s PM Oli

The other important issue touched upon during the talks was the matter of supply of COVID-19 vaccines. Nepal requested early access to vaccines, which India said would be given “priority consideration”.

The Motihari-Amlekhganj petroleum products pipeline will be expanded to Chitwan, with another new pipeline on the eastern side connecting Siliguri to Jhapa in Nepal also in the works.

There was also an agreement to expedite work on hydropower projects, including the Pancheswar dam.