Sharing the water of a transboundary river can be difficult even when the countries involved have an open border, as Nepal and India do. 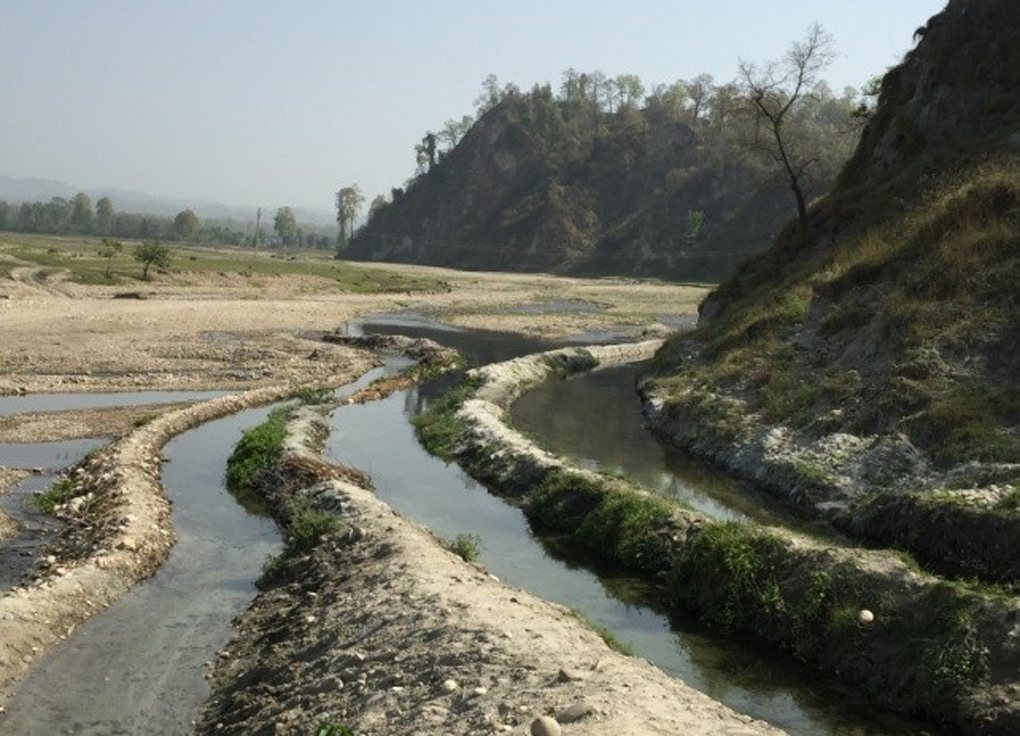 The Pandai river, artificially divided into three streams, as it flows from Nepal to India. Credit: Shawahiq Siddiqui

The Pandai is a small river that marks the international border for a short stretch between the Chitwan National Park in Nepal and the Valmiki Tiger Reserve in India. In the heat of the pre-monsoon months, just a few streams of water can be seen trickling down the stony riverbed. Residents of over a dozen villages in Nepal and India are critically dependent on this water for their homes and to irrigate their farms.

And that is the problem. Residents of Bhikhnathori, Dhamaura, Ekwa, Sahodara, Khairatia, Ankhawa and Bhawanipur villages along the border – in Bihar’s West Champaran district – allege that the villagers upstream in Nepal block and divert the thin channels, so that in summer, they do not even get enough water to drink. In an acknowledgement that the shortage is real, the district administration has been sending water tankers to ten villages that host about 40,000 people.

Walk just a little upstream, and you see residents of Budhnagar, Ramnagar and other villages in Nepal faced with the same situation unless they divert and block the little water that flows down the Pandai between March and June. It is Nepal’s water, they say, and are quite ready to assert their sovereign right over it.

Villagers in downstream India do not contest that right. Instead, they assert their own natural right to water, which an Indian court declared in a 1991 judgement was a part of the fundamental right to life under the Indian constitution. In meeting after meeting this summer, residents of Bhikhnathori and nearby villages along the river said they expect their government to ensure their fundamental right, and that means guaranteeing access to water.

The authorities can do so either by making alternative arrangements for basic water needs or by resolving the dispute with Nepal, they say, pointing out that water from the Pandai river had been peacefully shared for a long time and traditional community institutions were able to come up with a sharing formula in the time of water crisis.

These institutions, though, have broken down in recent decades, after residents in both Nepal and India were told that decisions would be taken through talks between Kathmandu and New Delhi. That has not happened, and villagers have clashed, leading to riots and deaths.

Border guards from both countries have had to intervene and persuade the villagers to split the flow of the Pandai into three channels this summer so that at least some water can flow downstream. However, residents of downstream villages feel that in the absence of any formal agreement on apportioning the water available in the river, it is very unlikely that the streams will continue to flow as they do now.

The residents are keeping quiet as long as nobody is blocking the channels upstream, but they live in constant fear of such a blockade. They also fear that any new dialogue or negotiation process aiming at long-term settlement can possibly take away whatever little water they have now.

Not a happy history

At the official level, water cooperation between Nepal and India does not have a happy history. There have been agreements signed on major rivers like Kosi, Gandaki, Karnali or Mahakali, essentially for large hydroelectric and irrigation projects by building dams or for barrages. No project except the Kosi barrage has been completed yet. Smaller rivers have been ignored.

If you count all rivers, streams and watercourses, 6,000 are shared between Nepal and India. Most of them are too small to catch the attention of policymakers at the central level in either country. But most of them are as vital for the people who live along their banks.

Take the case of the Pandai, which flows along the eastern border of the Valmiki Tiger Reserve once it enters India, and then within West Champaran, Gopalganj, Saran and Muzaffarpur districts of Bihar before joining the Masan and then the Ganga. Rivers like these ultimately form the Ganga-Brahmaputra-Meghna basin on which about 630 million people in Nepal, Bhutan, India and Bangladesh are critically dependent.

The 1950 Indo-Nepal treaty of Friendship and Peace established “special relations” between the two countries, but did not set up any overarching principle under which issues like water sharing on transboundary rivers could be worked out.

Not only is the Pandai dammed in summer, the small earthen dams are often removed without notice when the monsoon starts, leading to floods downstream.

Along the Pandai, the situation is further complicated by the poor demarcation of the border between Nepal and India. Residents of Bhikhnathori show maps that have become invalid after a 2007 agreement to transfer land between the two countries. They say this transfer has made them “water smugglers”, as many residents of villages in Nepal now call them. Verbal altercations are common; fisticuffs have been known as well.

The complete blockade of the Pandai followed the 2007 land transfer. Villagers in India blame not just residents upstream, but also the forest departments of both countries, which reportedly divert streams to provide water within the world-famous wildlife sanctuaries. There is tension between Bhikhnathori residents and Indian forest department officials anyway, over whether the village falls within the boundary of the tiger reserve.

Each time there is conflict, local officials from Nepal and India have to intervene – from the Indian side, officials at the level of the sub-divisional magistrate; from Nepal, the district magistrate or officials from its Border Security Force [Prahri]. On several occasions, when tensions have led to rioting and deaths, armed forces from both countries have had to intervene. The Seema Suraksha Bal, as the Indian border guards along the Nepal border are known, has a permanent camp in the area. Still, no district magistrate of West Champaran has ever bothered to visit them and find out about their problems, Bhikhnathori residents allege.

The district administration of West Champaran has attempted to solve the problem by proposing to dig ponds along the Pandai so that water can accumulate and be used during the lean season. But that needed the concurrence of Nepal’s forest department officials, who reportedly said they could not take a decision – the issue would have to be resolved through “dialogue between the two governments at a high level.”

Earlier, in 1999, the Bihar government had started to sink a tubewell in Bhikhnathori, but found rocks before the drill could reach the water table, and no rock cutting machine was available. “The machines never came and the engineers never returned,” says a resident.

The Pandai epitomises the need for a legal and institutional framework for the sustainable and equitable use of water that will include such small transboundary rivers. Right now, it highlights a significant gap in Indo-Nepal boundary management and water cooperation. Almost all the transboundary rivers are suffering due to climate change and higher demand for water. But the district administration in both countries continues to perceive water conflicts as just a law and order issue. The cumulative impact of this on peace, ecology, agriculture and economy in both countries cannot be ignored any longer.

So, who needs to be involved in the discussions and at what level? In both Nepal and India, the laws say such discussions should be held by central governments. That is clearly not working. And when such agreements have been inked, they have often led to more problems than solutions. There is a clear need to involve residents who actually live along the banks of these rivers and have to use the water every day.

It is very unlikely that India and Nepal will enter into an agreement or treaty on every single transboundary river. What is then desired is a framework agreement that provides space for community decisions and engagements with the mandate that they be technically supported by the district level administration in both countries.

Shawahiq Siddiqui is an environmental lawyer based in New Delhi.

This article originally appeared on thethirdpole.net.