India is Losing an Opportunity With China

Feeling that its overtures for closer ties have been rebuffed, China is now resuming its policy of isolating and neutralising India 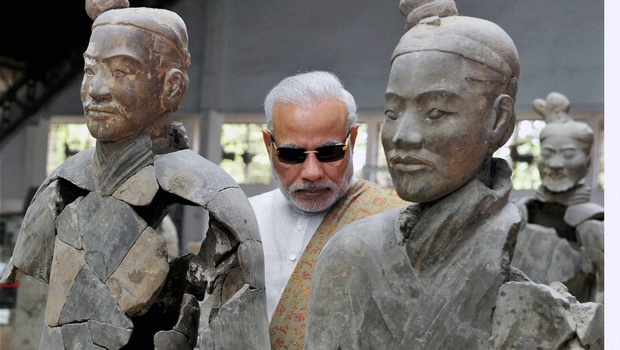 Prime Minister Narendra Modi during his visit to China in May 2015. Credit : PTI

When Delhi ignored Beijing’s quiet demarches to let sleeping dogs lie in Arunachal Pradesh, not only did the Vice foreign minister Liu Zhenmin summon Ambassador Ashok Kantha to express his “strong dissatisfaction and staunch opposition” to Narendra Modi’s visit in February 2015, but the entire text of his protest was released by the Foreign office, and carried in full by Xinhua , the next day.

China, he said  “has never recognized the so-called ‘Arunachal Pradesh’ unilaterally set up by the Indian side. It’s an universally recognized, unevadable fact that significant disputes do exist on the eastern section of the China-India border…. the so-called “Arunachal Pradesh” was established largely on the three areas of China’s Tibet — Monyul, Loyul and Lower Tsayul currently under Indian illegal occupation. These three areas, located between the illegal “McMahon Line” and the traditional customary boundary between China and India, have always been Chinese territory”.

However Liu kept the door open for resuming the convergence towards strategic cooperation that had taken place between Hua Hin and Durban. He again said that China placed importance on developing relations with India. He said the two countries, ‘as neighbors and the top two developing countries in the world, share broad prospect on cooperation at various levels’.

He expressed ‘the hope that the Indian side should treasure the sound momentum in the growth of bilateral relations, march toward the same goal with China and abide by the important consensus on the border issue’ and “called for the Indian side not to take any action that may complicate the border issue and stick to the general orientation of resolving the issue through bilateral negotiations so as to maintain the overall growth of bilateral relations”.

But the significance of this very public demarche was lost upon the Indian media, which did not even mention it. So two months later, surreptitiously, and therefore unnoticed yet again by the media, Modi sent four Indian warships to join a US carrier fleet in the South China Sea to enforce the freedom of navigation within it less than a week before his return State visit to China. With that all ambiguity about where India stood on the central strategic issue of our age, was dispelled.

Inspite of this China pulled out all the stops to welcome Modi later that year. Xi took an entire day out of his calendar to spend it with him in Xian. Li Keqiang spent in all 13 hours with him. The joint statement issued after the visit began by acknowledging “ the simultaneous re-emergence of India and China as two major powers in the region.” This was something Beijing had never before conceded and was obviously intended to keep the door open for serious further engagement on international issues. But Indian commentators either did not notice the shift or took it as an acknowledgement of India’s growing power and influence that required no quid pro quo.

Spread over several paragraphs was also a commitment by both countries to put the border dispute in cold storage and not allow it to hinder the further development of cooperation between the two countries. It reiterated that the two governments were determined to ‘actively seek a political settlement of the boundary question’ and ‘resolve outstanding differences, including the boundary question, in a proactive manner’. They agreed to exchange   regular visits and make full use of the opportunities provided by the presence of their leaders at various multilateral fora to hold consultations on bilateral relations and issues of regional and global importance. It again affirmed that an early settlement of the boundary question served the basic interests of the two countries and should be pursued as a strategic objective by the two governments.

But what was absent from it was any reference to strategic cooperation. This was glaringly obvious in the last, and from China’s point of view most important, section of the statement, sub-titled Shaping the Regional and Global Agenda. Given India’s explicit support for Vietnam’s rights in the South China sea, it came as no surprise that the statement steered clear of making even an oblique reference to the disputes that bedevil the region. But the joint statement did not even make a reference to the need to ensure the freedom of navigation in it.

China has stated, times without number, that it has no intention whatever of blocking free movement of commerce within it. Asserting a common commitment to protecting this freedom, possibly qualified by and explicit reference to commerce, would have balanced the reference to it in the Indo-US Joint Strategic vision statement of January 25. Its absence suggests that India either felt no need to establish such a balance or baulked at including any statement that would dilute the tacit commitment it had made to the US.

Equally significant was the absence of any reference to the civil war and humanitarian crisis in Syria, any explicit condemnation of ISIS and, most significantly, any welcome of the US and EU’s agreement with Iran. There was not even the implied criticism of the US’ quest for global dominance and a unipolar world that BRICS’ Delhi declaration had contained. Nor was there an endorsement of a multi-polar world order. It was as if the Delhi meeting of BRICS had never taken place.

Although Narendra Modi had taken a huge business delegation with him, and came back with $22 billion worth of state and corporate investment commitments, the joint statement concentrated only on terrorism, border demarcation, and the bilateral trade imbalance. The possibility of redressing this by facilitating large amounts of Chinese investment in India was only touched upon in passing. There was no reference in the joint statement to China’s proposal to form a Regional Cooperation Economic Partnership or to the One Belt, One Road (OBOR) plan into which it was absorbed, and no indication on whether India would join it or not.

The joint statement also showed that China had begun to hedge its bets. It ‘understood and supported’ India’s aspiration to play a greater role in the United Nations (no mention of the Security Council) and, in language that foreshadowed the US’ welcome of India’s interest in joining APEC, it ‘took note’ of India’s desire to become a member of the Nuclear Suppliers’ Group.

Since then, as the Modi government has ploughed ahead, China’s withdrawal of its offer of strategic cooperation, and return to its older policy of isolating, and neutralising India, has gathered momentum. It opposed — and prevented — Masood Azhar from being declared an International terrorist by the UN Security Council. It is opposing India’s membership of the Nuclear Suppliers’ Group. It has committed $14 billion to building a tunnel under the Great Himalayan range, roads, bridges and a rail link to end Nepal’s dependence on India for access to the rest of the world. It has committed $13 billion to building ports, roads and power plants in Sri Lanka and a whopping $45 billion to developing Pakistan’s road, rail, port and nuclear power infrastructure.

When these projects are completed Pakistan’s infrastructure will not only far outstrip that of India but also, by creating an alternate route for its exports to Africa and Europe through Pakistan, shower so much foreign exchange upon it by way of transit fees that it will never again have to turn to India for help as it did in 2012.

Prem Shankar Jha is a senior journalist and author of Twilight of the Nation State: Globalisation, Chaos and War, and Crouching Dragon, Hidden Tiger, Can China and India Dominate the West?

This is the third part of the series of Indian foreign policy under the Narendra Modi government. The first two can be read here and here.