For the second time in a year, the Italian side has sought – as a provisional measure pending adjudication of the jurisdiction issue – the return of its marine from India. 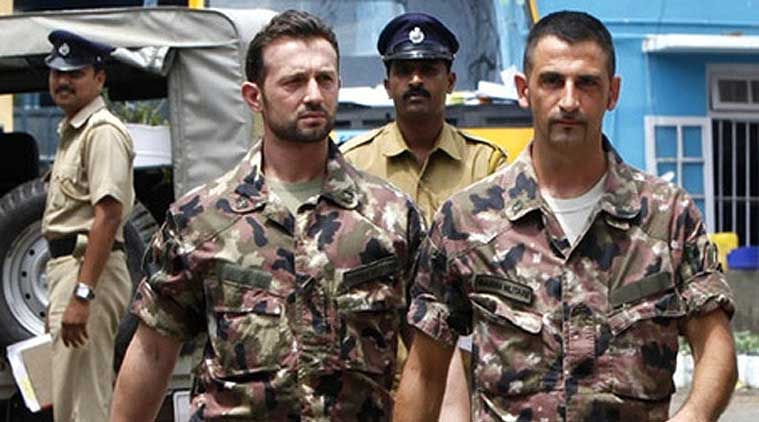 File photo of the two Italian marines, Massimiliano Latorre and Salvatore Girone, charged in India with the killing of two fishermen while off the Kerala coast in 2012. Photo: PTI

New Delhi: For the second time in eight months, India and Italy clashed before an international courtroom arguing over the return of an Italian serviceman to his country during the duration of the arbitration of the Enrica Lexie case in which two Indian fishermen off the coast of Kerala were killed by two Italian marines in 2012.

Ironically, the oral hearings began on Wednesday before an ad-hoc tribunal in Hague, just as Prime Minister Narendra Modi commenced a two-day official visit to Belgium and the European Union.

The India-EU summit had been called off last year after Brussels did not react promptly to New Delhi’s dates. The delay was ascribed by the Indian side to the EU’s foreign policy chief, Federica Mogherini – who is a former Italian foreign minister – being peeved over New Delhi’s insistence on trying the two marines in India.

Italy also single-handledly stopped India’s bid to join the Missile Technology Control Regime (MTCR) last year in October. While Italian diplomats did not give a explanation at the meeting for the ‘hold’ they placed on India’s candidature, it was believed to be a fallout of the prolonged case of the two marines.

India, on its part, believes the fate of the Italian marines is “not really a bilateral issue any more”. “It has been taken out of bilateral ambit to an international arbitration process, a process to which both parties stand committed,” said MEA’s joint secretary (Europe west) Nandini Singla on Monday to a question on whether the EU summit will heal the rift over the marines.

Last year, Italy moved the International Tribunal for Law of the Sea (ITLOS) seeking provisional measures to stop India from prosecuting the two marines, Massimiliano Latorre and Salvatore Girone, as well as for them to stay in their own country pending the trial process.

In its judgement delivered on August 24, 2015, the tribunal accepted the first part of Italy’s plea – suspending domestic prosecutions arising from the Enrica Lexie incident in both countries. But it refused to accept the second Italian plea, since it “touches upon issues related to the merits of the case” – which is the sole jurisdiction of specially-constituted tribunal to adjudicate the case.

The UN Convention for Law of the Sea (UNCLOS) specifies four methods to settle disputes, one of which is for ad-hoc arbitration as spelled out in Annex VII of the convention. File photo of the two Italian marines, Massimiliano Latorre and Salvatore Girone, charged in India with the killing of two fishermen while off the Kerala coast in 2012. Credit: PTI

After ITLOS ruled on the matter last year, India and Italy agreed that the dispute would be settled under an Annex VII tribunal, which was finally constituted with five arbitrators on November 6, 2015.

A month later, Italy requested provisional measures from the ad-hoc tribunal under Section 290 (1) of UNCLOS to direct India to “take such measures as are necessary to relax the bail conditions on Sergeant Girone in order to enable him to return to Italy, under the responsibility of the Italian authorities, pending the final determination of the Annex VII Tribunal”.

While India had charged two Italian naval officer for the 2012 crime, Latorre has been in Italy for the past two years on Supreme Court-approved medical leave to recuperate from a stroke. A hearing for his leave extension will take place on April 17. Girone has, meanwhile, remained continuously in India since 2014, where he is confined to the Italian embassy compound.

In its December 2015 written submission which was publicly released today, Italy has argued that the “Annex VII proceedings could last between two to four years, or more before a final Award of the tribunal is rendered”.

“Sergeant Girone’s continuing deprivation of liberty, which is in breach of minimum guarantees of due process under international law, causes irreversible prejudice to Italy’s rights of jurisdiction over and immunity for its official,” it argued.

Italy renewed its “solemn undertakings to the effect that it will comply with an award of the Annex VII Tribunal requiring the return of the marines to India”. Francesco Azzarello, ambassador of Italy to The Netherlands, and ‘agent’ of Italy in the Enrica Lexie case. Credit: Daniel Bockwoldt/ITLOS

“An individual cannot, however, be deprived of his liberty and other fundamental rights on the basis that he is a guarantee for the future compliance by a state with the award of an international tribunal,” said the Italian submission to the Tribunal.

As per a report of the Italian news agency ANSA, Italy’s ‘agent’, or representative at the hearing, Ambassador Francesco Azzarello said that since the arbitration “could last at least three or four years”, it meant that Girone risks “being held in Delhi, without any charges being made, for a total of seven-eight years”.

Azzarello told reporters on Wednesday that Italy was “hopeful’ as the case was “based on its solid humanitarian and legal reasoning, otherwise it would not have come here”.

In the first round of hearings today, India’s agent, Neeru Chadha, a senior official with the legal and treaties division of the Ministry if External Affairs, closely adhered to the Indian argument as delineated in its written response.

In written observations to the tribunal dated February 26, India noted that most of Italy’s contentions have been dealt with by ITLOS and that there were no new circumstances for modification of the August 24 order. “The provisional measure Italy is now requesting for the second time is also identical to one of its submissions on the merits,” said the Indian reply.

Italy’s assertion that the “immunity of the official” has been prejudiced meant that tribunal will have to judge the “merits” of the case, rather than only a provisional measure which won’t impact the final order, felt India.

Italy had argued that Latore and Girone could not be prosecuted by India due to the location of the incident on the high seas and also that they were subject to immunity as member of the Italian armed forces.

“..as India already explained, this is precisely why the provisional measure cannot be granted. Italy would obtain a prejudgment on the immunity issue and the remedies it is seeking on the merits – i.e., the relaxation of the (mild) measures of restraint on Sergeant Girone and his return to Italy,” argued India.

It pointed out that Girone was not in a jail, but staying at the Italian ambassador’s residence and was visited by his family members on multiple occasions.

“The humanitarian aspect of prolonged confinement of Sergeant Girone is pertinent and factual,” India noted, adding, “The Supreme Court of India, as stated above, has been quite sympathetic to these concerns allowing him to travel to Italy twice and Government of India also in fact [has] not opposed the requests for relaxation of bail conditions if circumstances so demanded”.

Asking the court to reject the Italian submission, India claimed that Italy was “delaying the proceedings on the merits of the case by presenting the same request again”. “These new proceedings add to the burden of this matter,” it added.

Indian police contends that Latorre and Girone, while posted on the merchant ship Enrica Lexie, had shot at two Indian fishermen, mistaking them for pirates operating near the Kerala coast on February 15, 2012.