To state that the amendments supported by India are all antithetical to the spirit of the UNHRC resolution, as some media houses have, is simply incorrect. 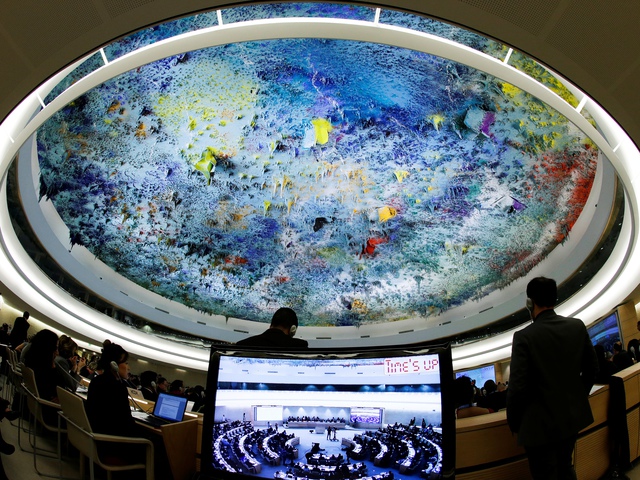 New Delhi: India hasn’t had the best record when it comes to Internet rights. The country regularly carries out Internet shutdowns under flimsy pretexts, is still fumbling when it comes to the drafting of a comprehensive privacy bill, and most recently came out with a geospatial information regulation bill that would establish ownership over all forms of location data.

So, last week, when the United Nations Human Rights Council (UNHRC) passed a resolution on the “promotion, protection and enjoyment of human rights on the Internet”, it wasn’t surprising to see the wave of media criticism of the amendments that were proposed by countries such as China and Russia – and which were supported by India.

South Africa’s Mail & Guardian ran a story headlined “South Africa votes with China, Russia and India against Internet freedoms in UN resolution”. Private Internet Access’s headline was “These 17 Countries Don’t Believe that Freedom of Expression on the Internet is a Human Right”.

Popular tech website The Verge noted that the resolution was opposed “by a minority of authoritarian regimes including Russia, China and Saudi Arabia, as well as democracies like South Africa and India. These nations called for the UN to delete a passage in the resolution that ‘condemns unequivocally measures to intentionally prevent or disrupt access to our dissemination of information online’.”

The Verge‘s report was followed up by a number of Indian publications including IndiaToday and Medianama – the latter incorrectly stating that the UNHRC resolution “recognised Internet usage as a basic human right – as well a host of other global publications.

There were two fundamental mistakes with some of these reports. Firstly, the resolution was adopted without vote (with oral revision) as noted by the UNHRC. Therefore, while there were a number of countries which co-sponsored the resolution and many that didn’t, it is completely wrong to state that India – as the Mail & Guardian reported – or any other country, voted against the resolution.

Secondly, as noted by the Centre for Internet and Society, none of the four amendments supported by India called for the deletion of a passage that condemned the prevention or disruption of Internet access and online information dissemination. Although it may fit neatly within India’s history of issuing Internet block orders, no country was opposed to this paragraph at the UNHRC forum (although many countries including India flout this clause in spirit back at home). No such amendment was proposed.

What then were these four amendments, which Article 19, an organisation that advocates freedom of expression, stated would “substantially weaken the resolution”? Out of the four amendments (referred to as L85-88 in the UNHRC resolution), the first amendment (L85) – which sought to include a reference to fighting against the exploitation of children online – was withdrawn by Russia before it was considered by member states.

The other three amendments, while not completely endorsed by the countries that co-sponsored the resolution, do carry a certain level of nuance. Only one of the amendments (L86) can truly be described as diluting language regarding freedom of expression online, although this could have been potentially a result of procedural politics.

L88: Including Reference to Hate Speech

This amendment – proposed by Belarus, China, Iran and the Russian Federation – asks to introduce a new paragraph that states:

“Expresses its concern at the use of the Internet and information and communications technology to disseminate ideas based on racial superiority or hatred, and incitement to racial discrimination, xenophobia and related intolerance.”

Article 19 says of this amendment that it would “undermine the intended focus of the draft resolution on protecting human rights online, in particular freedom of expression..” While it is true that a few paragraphs of the resolution’s preamble include a reference to hate speech, it is difficult to see what harm this amendment would have brought in and even more difficult to accept that it would dilute the focus of the overall resolution.

Using the Internet and other online media technologies for incitement and as a means of propagating intolerance and xenophobia is a very real problem in India and other Asian countries, the most notable example of which was the role that social media played in the exodus of north-east Indian migrants from Bangalore four years ago. While shutdowns are obviously not the best way of dealing with this, it is important to acknowledge the role of the Internet as a medium in this aspect.

In sum, this amendment certainly would not have diluted the resolution’s aim of promoting freedom of expression online.

PP17:  Stressing the importance of applying a comprehensive and integrated (human rights-based approach) in providing and expanding access to the Internet and for the Internet to be open, accessible and nurtured by multistakeholder participation,

OP5: Affirms also the importance of applying a comprehensive and integrated (human rights-based approach) in providing and in expanding access to Internet and requests all States to make efforts to bridge the many forms of digital divides..

This amendment was a little trickier. According to people involved in the country stakeholder discussions, whom The Wire spoke with, the aversion to a ‘human-rights’ approach towards expanding Internet access came as a result of China and Russia playing procedural politics. The language that was proposed in the amendment – “comprehensive and integrated” – while certainly not the strongest possible language that could have been used, would not have legally diluted the proposal to expand Internet access while maintaining an open and multistakeholder approach towards Internet governance.

Stepping back, what would a human rights-based approach in expanding Internet access look like? Would it include legitimising the act of zero-rating and the approval of schemes such as Facebook’s Free Basics? Both of which, incidentally, have been banned in India. While the proposed amendment certainly does not speak well of the motivations of China, Russia and India, the term is also vague enough that its mere removal doesn’t indicate a lack of support towards Internet freedom.

L88 – Right to privacy and removal of UDHR reference

This amendment, proposed by China and the Russian Federation, was more straightforward. In two paragraphs, it sought to add the specific term ‘right to privacy’, while in another paragraph it proposed removing reference to language from, and articles in, the Universal Declaration of Human Rights.  Had the amendment been passed, the changes in the following paragraphs would have been made:

PP7: Noting that the exercise of human rights, in particular the right to freedom of expression and the right to privacy, on the Internet is an issue of increasing interest and importance as the rapid pace of technological development enables individuals all over the world to use new information and communication technologies,

OP15: Decides to continue its consideration of the promotion, protection and enjoyment of human rights, including the right to freedom of expression and the right to privacy, on the Internet and other information and communication technology, as well as of how the Internet can be an important tool for fostering citizen and civil society participation, for the realisation of development in every community and for exercising human rights, in accordance with its programme of work.

OP1: Affirms that the same rights that people have offline must also be protected online, in particular freedom of expression , and the right to privacy  in accordance with articles 17 and 19 of the   International Covenant on Civil and Political Rights;

On one hand, this amendment would have added specific reference to the right to privacy. That specific term doesn’t appear in the draft resolution, although there are a few references to privacy in general in the resolution’s preamble.

However, the addition of a ‘right to privacy’ is coupled with a watering down of clear references to the protection of freedom of expression.   Cynical observers would rightly note that China and Russia are probably less concerned with online privacy and more irked with the clear support of freedom of expression “regardless of frontiers” and “in accordance with the Universal Declaration of Human Rights”; which is probably why this particular proposed amendment combined both issues to improve its chances of passing. While there is little doubt that this amendment would have diluted the resolution’s focus on protecting freedom of expression, the alternative phrasing also doesn’t create legal loopholes that renders it useless. Moreover, it still contains reference to the International Covenant on Civil and Political Rights, especially Article 19, which goes beyond Article 19 of the UDHR .

It would be naive and wrong to take a strong position either way. To state that the amendments supported by India are all antithetical to the spirit of the UNHRC resolution, as some have done, is simply incorrect. On the other hand, this doesn’t mean India, and even less, China and Russia, are guardians of Internet freedom.

The UNHRC resolution in its entirety is a fine document. While non-binding, it provides a foundation for claiming that the same rights people have offline “must also be protected online”. Other crucial sections state that governments “should ensure accountability for all human rights violations and abuses committed against persons for exercising their human rights online”, while condemning “measures to intentionally prevent or disrupt access to or dissemination of information online”.

While the amendments India supported may not wholly oppose this resolution, it is also true that successive Indian governments also do not have an admirable track-record of upholding the resolution’s aims. Freedom for online speech had to be reclaimed in the form of court judgements, with the current government still supporting regulations that would allow it clamp down on online freedom of expression. In certain states within the country, Internet shutdowns happen without public explanations or justifiable reasoning. Over the last four years, for instance, Jammu and Kashmir has lost 18 days of Internet access. While it may not have wholly opposed the UNHRC resolution, the country still has a ways to go in terms of Internet freedom.