How India Should Respond to Donald Trump’s Barbs on Afghanistan

India needs to convert the universally acknowledged goodwill that we enjoy in Afghanistan into positive influence, and there are several options sans the ‘military boots on ground’ solution.

Election posters of parliamentary candidates are installed on a street while a boy walks past in Jalalabad, Afghanistan, October 6, 2018. Credit: Reuters/Parwiz

With a trademark Donald Trump tweet calling out Pakistan’s “lies and deceit” on Afghanistan, 2018 started ominously for the former nation. In 2019, it was India’s turn. At a press conference following the first cabinet meeting of the year, the US president chided the Indian government for doing little else than building libraries in Afghanistan.

A predictable online kerfuffle ensued which involved taking potshots at Trump’s ignorance about India’s contributions in the South Asian country. But let’s take a step back and analyse if Trump’s outburst has any substance.

Though crude and un-diplomatic, his comment is not entirely wrong. Shorn of the rhetoric, there is very little India has to show for since Trump announced his ambitious Afghanistan strategy on August 21, 2017. Back then, he had announced that his new strategy would focus on a ‘fight to win’ military effort aimed at ‘killing terrorists’. Trump had also requested for a bigger Indian role in Afghanistan with these words:

“We appreciate India’s important contributions to stability in Afghanistan, but India makes billions of dollars in trade with the United States, and we want them to help us more with Afghanistan, especially in the area of economic assistance and development.”

Now let’s look at what India has done in Afghanistan since this speech. The Chabahar port project, which is key to reducing Afghanistan’s dependence on Pakistan, moved forward. Most notably, India sent shipments of grain to demonstrate the viability of the route. However, the progress in port development itself remained slow.

In a response to a Lok Sabha query on January 3, the minister of state for shipping informed that since 2016, India has managed to spend a paltry Rs 5.47 crore on Chabahar out of a budget allocation of Rs 250 crores. The blame partly rests on the US administration for ratcheting up the pressure on Iran which has created impediments in global tenders and in attracting investment.

But the same US administration also redeemed itself – partly by exempting India from CAATSA sanctions on Chabahar, banking transactions with Iran and Iranian oil purchases. What’s worse is that beyond some action on Chabahar and the delivery of one Mi 25 attack helicopter, India chose to take a back seat in Afghanistan.

One may argue that the perceived high financial and opportunity costs restrained India’s involvement in Afghanistan despite Trump’s statement in 2017. However, in somewhat similar circumstances 20 years ago, the Indian government had chosen to do a lot more at a time when our financial situation was not very comfortable and we were reeling – quite ironically – under the post-Pokhran US sanctions.

Back then, India supported the Afghan government – led by President Burhanuddin Rabbani – and helped the Afghan army, then led by his defence minister Ahmad Shah Massoud. It was this army, in their broader alliance with what is commonly referred to as the Northern Alliance, that prevented a complete takeover of Afghanistan. It is also this 15,000-strong force that supported the relatively small 350-man special forces detachment of the US in ground fighting which wrested control of Afghanistan from the Taliban.

Of course the argument is not that we should up our game in Afghanistan because we have done so in the past – that would mean falling prey to the sunk cost fallacy. But inaction at this critical juncture will have significant long-term consequences for India. One, it would give a fresh lease of life to the al Qaeda and other global terror groups. Two, Russian-speaking ISIS cadres returning from Syria could use Afghanistan as a sanctuary and launching base to unsettle the Central Asian Republics. And three, Pakistan will look to relocate LeT and JeM across the Durand Line in another maneuver of plausible deniability.

We believe that the Indian government can help in rebuilding the republic of Afghanistan and there are options sans the ‘military boots on ground’ solution. India needs to convert the universally acknowledged goodwill that we enjoy in Afghanistan into positive influence, which we can wield as a regional player.

On the security front

First and foremost, we need to urgently focus on the security situation. We need to look at Afghanistan outside the arc of the neighbourhood and give it a special status. For this, an empowered Special Representative is an immediate requirement. A troubled Afghanistan could lead to creating conditions that will affect our security interests and providing assistance to Afghanistan would lead to benefits for us. For this, an empowered monitoring entity would be a requirement.

Second, with the worsening security environment, bolstering anti-insurgency institutions should take primacy over economic development projects. Here, India can look at building capacity in the Afghan Police and the ANDSF.

One given is that the local police can be more potent at styming Taliban consolidation. The police in Kandahar is an example. While the Taliban made major inroads into neighbouring Helmand, Kandahar — which is in many ways integral to control of Afghanistan — has been largely free of the Taliban because of the police and its chief, the late Gen Abdul Raziq. The skirmishes that take place in the countryside are often less sophisticated; hit and run tactics are commonly deployed.

Given this situation, fighting insurgency is more a task for a well-equipped local force than the Army, our own experiences being the Maoist belt and Punjab. The lessons learnt, particularly by the Andhra Pradesh Police, can be used and the Indian paramilitary could look at training and outfitting counter-terrorism police units in some of the crucial provinces, not just in the south but even in other parts of the country.

For the ANDSF, training personnel remains the key. We could also look at a plan of transferring more military equipments. The transfer of Mi 25 helicopters shouldn’t go down as a one-off intervention.

On the political front

Third, India needs to play a more active political role in Afghanistan. In our attempt to be equitable we have sometimes ignored our friends. For example, very little has been done in Panjshir. India needs to look at look at establishing a well-equipped Industrial Training Institute there to create the infrastructure for repair and maintenance and to impart technical job skills. Building airstrips for better connectivity is another area where we can help. Encouraging or partly financing two-wheeler assembly plants is a win-win for Afghanistan and for our own industry.

There has also been a perceptible shift in India’s position on contact with the Taliban. Two retired ambassadors, former envoys to Pakistan and Afghanistan, were present in the Russian-sponsored talks which saw participation of a US diplomat, the Taliban, the Afghan High Peace Council and Central Asian states. 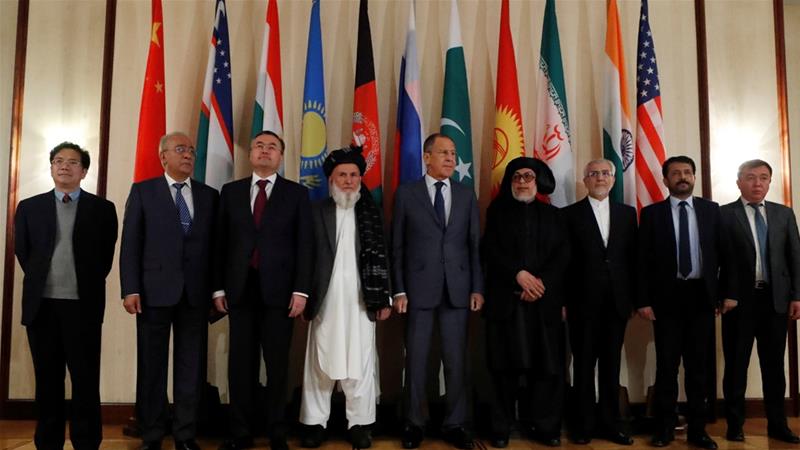 The Moscow meeting was attended by members of the High Peace Council of Afghanistan, officials from Iran, Kazakhstan, Kyrgyzstan, China, Pakistan, the US, Tajikistan, Uzbekistan and Russia – and ‘non-officials’ from India. Credit: Reuters/Sergei Karpukhin

Though the government took the line that they were not official representatives and were on a listening brief, it was as close to being official as possible as one is the current head of the MEA sponsored ICWA and the other a member of the NSAB.

Also read: What Talking to the Taliban Means

As the next step, other than any back channel or intelligence driven contacts, it would be opportune to examine some limited interaction with the Taliban. It would have to be nuanced as the Afghan government has a view and forces in the north would be opposed to any contacts. A start could be at the non-official Track 2 level, where contacts are open but without the formal imprimatur of the state. This would need to be done after the Afghan government is taken into confidence.

The present Afghan model of governance is weighted in favour of the majority community. The divide has to narrow to make representation more equitable. The Afghans recognised the need for some form of power sharing by creating a post of a Chief Executive which was to transition to a Prime Minister but that is yet to happen. Earlier constitutions had this system and the last prime minister was actually Gulbuddin Hekmatyar, a Pashtun, while the president was a Tajik – Burhanuddin Rabbani. India and most countries of South Asia have adopted a Westminster model which more accurately reflects their multi-ethnic and diverse populace. We need to convey our own perspective and experience, and organising tours for Afghan parliamentarians and conducting workshops would be useful to help them make up their mind.

On the societal front

Finally, enhancing cultural ties is a must. Cricket is an area where our involvement has been fruitful and has earned us much accolades. We could look at expanding this assistance to other areas where we are on the world sports map – wrestling, boxing, shooting and even encourage the participation of Afghan women. Sponsoring an Afghan women’s cricket team would make an impact.

Many states in India have excess engineering seats and we could look at opening this to Afghan students subject to their meeting a benchmark. Since the numbers are not very large, a UK type of visa regime to permit them to work for upto two years to get a hands-on experience of how to put into practise what they have learnt could be experimented with. Not only would it help build the proper capacity in Afghanistan but also work to the advantage of our engineering colleges.

When Trump says that India is only building libraries, it’s not only the the Americans who are forgetting what India has done for Afghanistan. Our own institutional memory is poor and we have little recollection of the great friendships which thrived then, meticulously and painstakingly built up, with the Pashtuns, the Tajiks, the Uzbeks, the Hazaras, the Nooristanis, the Peshais, the Aimaks, etc. After the fall of the Taliban, an unprecedented nine ministers from Karzai’s 30 man interim cabinet, including some from the Rome group, made their first overseas visit to Delhi to thank India for its help. Those links need to be rekindled.

It is for India’s own national interest that we need to do a lot more and help build a strong, resilient, democratic and peaceful Afghanistan.

Anand Arni and Pranay Kotasthane are with the Geostrategy Programme of the Takshashila Institution, a Bengaluru-based think tank.