While seven other countries, including Pakistan, China and Russia, also attended, the pro-democracy movement has asked why “one of the greatest democracies in the world” sent a representative to “shake hands with the generals whose hands are soaked with our blood". 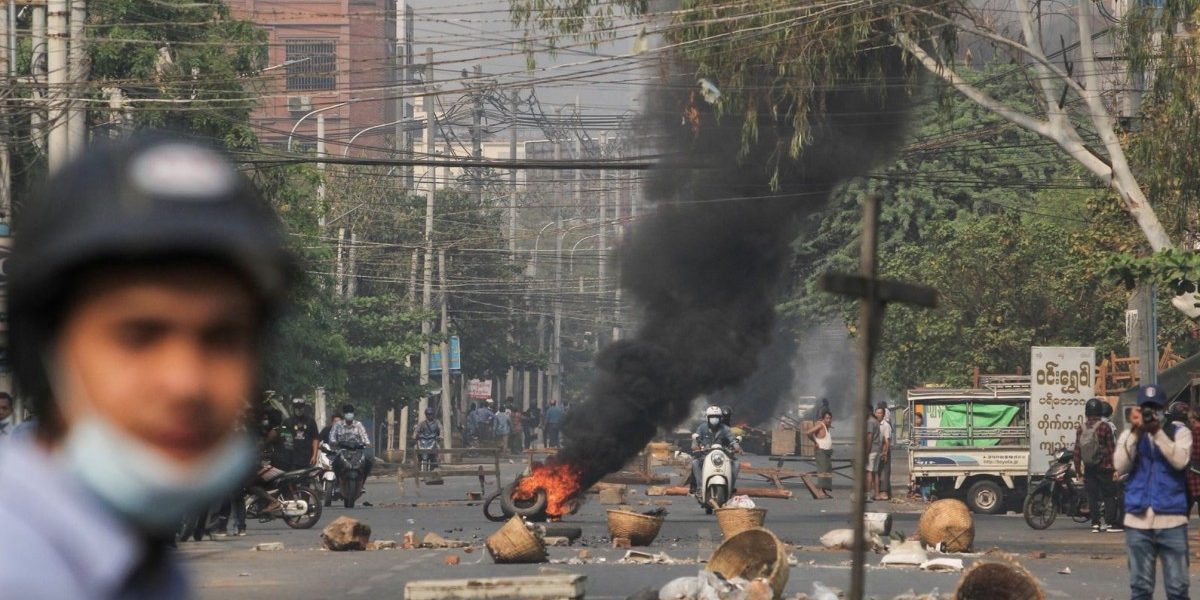 Tires burn on a street as protests against the military coup continue, in Mandalay, Myanmar March 27, 2021. Photo: Reuters/Stringer

New Delhi: India was among only eight countries which chose to send a representative to attend the Myanmar Armed Forces Day military parade in Naypyitaw on March 27, a day that saw the country’s military shoot and kill at least 90 civilians, with some reports putting the death toll at 114.

Weeks of demonstrations and a deadly crackdown have roiled the nation since the February 1 coup brought back full military rule. The death toll before Saturday’s bloodbath was estimated at more than 400.

Indian officials confirmed that India’s military attaché attended the massive parade. The date marks the 76th anniversary of the Burmese National Army’s resistance against the occupying Japanese during the Second World War.

None of the other countries which sent representatives to the official parade of the Myanmar military despite the coup and mounting civilian casualties would be considered democratic by Western or (traditional) Indian standards – China, Pakistan, Bangladesh, Vietnam, Laos and Thailand and Russia. Russia was represented by its deputy defence minister, while the rest sent representatives from their local embassy.

As news about the participation of foreign missions at the official parade emerged, there was immediate condemnation from pro-democracy protestors on social media.

A verified Twitter account of the Myanmar pro-democracy movement asked why India, “one of the greatest democracies in the world”, sent a representative to “shake hands with the generals whose hands are soaked with our blood”.

Indian embassy in Myanmar sent their military attaché to the military junta’s ‘armed forces day’ ceremony. India is one of the greatest democracies in the world. Why do you shake hands with the generals whose hands are soaked with our blood? @DrSJaishankar @MEAIndia @PMOIndia

In a strongly-worded statement, the spokesperson for an anti-junta group of elected NLD lawmakers, known as the ‘Committee Representing Pyidaungsu Hluttaw’ (CRPH) described Saturday as a “day of shame for [the] armed forced”. “I cannot express enough the pain it causes all of the people of Myanmar to see some foreign diplomats today alongside Min Aung Hlaing and his henchmen” at the same time that innocent people “were being murdered throughout the country,” he wrote, adding, “The foreign diplomats who attended this shameful armed forces day are a disgrace to their own people, their governments and to the international community”.

Today, is “a day of shame for armed forces “, the illegal junta in Myanmar celebrated Armed Forces Day by murdering at least 91 men, women and children across our country. pic.twitter.com/EZ9lQ86hXL

Indian officials told The Wire that the United States had been pushing for countries not to attend the Myanmar armed forces day. Whether it was in response to Washington’s call or their own assessment that the presence of foreign military officers may embolden the regime in its current crackdown, most countries with a diplomatic presence there preferred to keep away from the event.

As per media reports, at the parade, Senior General Min Aung Hlaing reiterated that elections would be held but did not give any time frame.

Also read: More Than 90 Killed in Myanmar in One of Bloodiest Days of Protests

“The army seeks to join hands with the entire nation to safeguard democracy,” he said, in a live broadcast on state television, Reuters reported. “Violent acts that affect stability and security in order to make demands are inappropriate”.

Indian officials reject the suggestion that the optics of India’s presence at the event was problematic, pointing to “conversations” that  western diplomats and military leaders have had with the Tatmadaw, the formal name of the military in Burmese.

The comparison appears ill-suited given that those conversations are not public and are part of the international community’s efforts to get the Myanmar military to change course – and this would not be seen by the country’s embattled civilians as endorsement of the coup.

According to The Irrawaddy, Saturday marked the largest number of fatalities in a single day since the February coup. The Myanmar news portal recorded the death of 102 people, including four children, in ten out of Myanmar’s 14 states and regions.

UN Secretary General Antonio Guterres stated that the crackdown, which has led to the highest daily death toll, was “unacceptable”. Calling for a “firm, unified and resolute international response”, Guterres said that it was “critical to find an urgent solution to this crisis”.

I am deeply shocked by the killing of dozens of civilians, including children & young people, by security forces in Myanmar today.

In the early hours of February 1, the Myanmar military declared a state of emergency. It arrested all elected lawmakers, including State Councillor Aung San Suu Kyi, on the grounds that there was electoral malpractice in the November general elections. Suu Kyi’s National League for Democracy (NLD) had got a landslide mandate in the polls, while the military-backed USDP had been marginalised.

India’s first reaction after the takeover had been to express “deep concern” and assert that the “rule of law and the democratic process” must be upheld.

Following the coup, Myanmar has been nearly paralysed by street protests, which have been met with a heavy security crackdown. The embassy had on February 28 issued a short statement expressing “heartfelt condolences to families and loved ones of those deceased”. “We would urge all to exercise restraint and resolve issues through dialogue in a peaceful manner,” it added.

So far, India has not issued a standalone statement condemning the killing of civilians by Myanmar’s military though it has been party to a strongly worded resolution at the UN Human Rights Council.

During the United Nations General Assembly’s informal meeting on Myanmar, India had reiterated its position on the restoration of the elected government. India’s UN envoy called for the release of all detained and hoped that the “gains made by Myanmar over the last decades on the path towards democracy, should not get undermined”.

As a non-permanent member of the UN Security Council, India has been active in shaping some of the language in the documents issued from New York. However, the P-5 countries, especially the UK as the penholder on Myanmar, are the major players.

So far, the UNSC has issued a press statement in February and a presidential statement this month, both of them adopted by consensus. This means that while China and Russia have publicly said that developments in Myanmar are an internal affair of the country, they have also supported the UNSC actions.

Similarly, the UN Human Rights Council adopted a resolution by consensus on Myanmar that “condemns in the strongest terms” the military takeover of February 1. The 47-member of the UN body, which includes India, China, Russia, Bangladesh and Pakistan, had also condemned the “disproportionate use of force, including the indiscriminate use of lethal force, by the Myanmar armed forces and police”.

Also read: The Rest of the World Must Acknowledge the Impact of Rohingya Refugees on Bangladesh

India’s unwillingness to take a firm stand against the crackdown in Myanmar reflects both the Ministry of External Affairs’ traditional reluctance to avoid raising concerns about the human rights situation in other countries as well as its anxieties over the Myanmar military’s willingness to play the China card.

Before the current crisis, New Delhi believed Myanmar’s generals had recognised the dangers of over-dependence on China and was eager to calibrate their position. However, the February 1 coup has meant that the Myanmar military is back in UNSC veto-wielding China’s arms to be shielded from the adverse international response. India’s calculations now are led by a belief that China should not take sole advantage of Myanmar’s diplomatic isolation from the west.

As a next-door neighbour of Myanmar, New Delhi has always sought to take a more nuanced position on the south-east Asian nation rather than follow the US and EU’s footsteps. During the current crisis, India has already conveyed to its interlocutors in western capitals that sanctions against Myanmar would not be helpful.

The presence of Thailand, Laos and Vietnam at Saturday’s military parade in Naypyitaw  also signals the fact that ASEAN is divided over Myanmar. Some ASEAN countries – Indonesia, Malaysia, and Singapore – have called for an urgent summit on Myanmar, but it is still not clear if it will be held.

At Indonesia and Malaysia’s initiative, an informal ASEAN meeting was held on March 2 through a video conference. While it urged all sides in Myanmar to exercise “utmost restraint as well as flexibility”, the chairman’s statement indicated that there was no consensus within the regional body on calls for the release of political detainees and a reversal of the coup.