At the event, also attended by Bhutan's ambassador to India, a senior Chinese military officer said there were "new complexities" in China's ties with India. 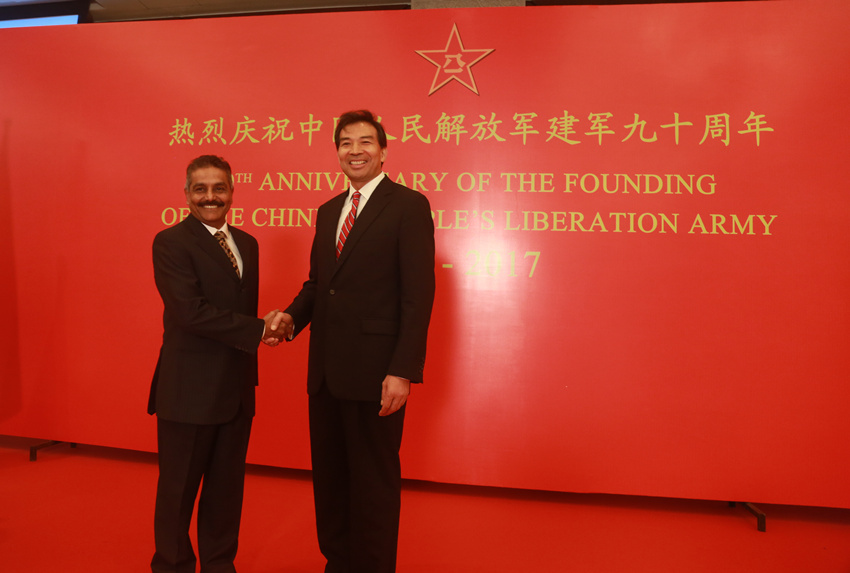 New Delhi: Even as the stand-off between Indian and Chinese troops in the Doklam area continues, the Chinese embassy in India organised a reception to mark the 90th anniversary of the founding of the People’s Liberation Army (PLA), where a senior Chinese military officer noted that there were “new complexities” in India-China relations.

Air Vice Marshal S. Prabhakaran was the chief guest at the event held on July 31 in a hotel in New Delhi and stood on the dais along with the Chinese ambassador to India Luo Zhaohui.

According to a press release published on the Chinese embassy website, the Chinese defence attaché, who presided over the function, said that the PLA continues to safeguard national sovereignty and territorial integrity.

“The Chinese People’s Liberation Army has developed into a modern army of multi-military synthesis, unswervingly safeguarding national sovereignty and territorial integrity, and has the confidence and ability to cope with various security threats and challenges,” said military attaché Zhou Jian.

He alluded to the latest stand-off in his speech but did not mention it directly. “There are some new complexities and serious events in the current Sino-Indian relations, especially in the border areas,” said the senior Chinese military officer, adding that the “Chinese position is very clear and firm”.

It has been nearly seven weeks since Indian and Chinese forces confronted each other at the ‘turning point’ on the Dolam plateau in Bhutan’s Doklam region. India has said that Chinese troops were building a road in Bhutanese territory, which has strenuously been denied by Beijing. China, on its part, has claimed that Indian troops are on Chinese territory, since the Sikkim boundary was “settled” by the 1890 Sino-British convention.

The stand-off continues with China demanding immediate Indian withdrawal, while New Delhi has asserted that it has serious security concerns about the Chinese presence in the tri-junction.

According to the press release, the reception was attended by over 300 people, which included “Indian government, military, parliament, political parties and friendly people from all walks of life, foreign ambassadors, military attorneys, Chinese-funded enterprises and representatives of Chinese media in India”.

It has been learnt that among the foreign envoys at the function was Major General V. Namgyel, Bhutan’s ambassador to India.

Despite not having formal diplomatic relations, Bhutanese and Chinese diplomatic missions in India have always had regular contacts. When Bhutan formally protested Chinese presence at Doklam, the diplomatic note was sent through the Bhutanese embassy in Delhi.

The reception took place on the same day the Indian media reported about an “incursion” by Chinese border troops in Uttarakhand on July 25.

The reports have, however, been denied by the Indian army spokesperson with government sources also dismissing it as a regular occurrence due to the disputed nature of the boundary.

“Incidents of similar nature have happened in the past but are normally sorted out locally and should not be given undue importance,” sources said.

While the stand-off continues at the Himalayan heights, diplomatic channels remain open and Indian officials continue to visit China for a slew of meetings ahead of the BRICS summit in September. The commerce minister Nirmala Sitharaman is currently in Beijing to attend a BRICS-related meeting. The National Security Advisor Ajit Doval was also in China last week, where he held a bilateral meeting with his counterpart – but no details about the conversation have been released by either country.

After referring to the Doklam stand-off, he added, “We hope that the two armed forces will work together to promote mutual trust and disagreement, and promote the development of China-India relations along the correct track.”

The 90th anniversary of the PLA was celebrated with heightened hype in China, where for the first time a grand parade was organised at the remote Zhurihe base in Inner Mongolia on Sunday (July 30).

The Chinese president and PLA commander-in-chief Xi Jinping took the salute at the parade, where he was seen in an army uniform for the first time ever.

In a speech on Tuesday at the Great Hall of the People, Xi said that China will not allow the loss of “any part” of its territory.

“The Chinese people love peace. We will never seek aggression or expansion, but we have the confidence to defeat all invasions. We will never allow any people, organisation or political party to split any part of Chinese territory out of the country at any time, in any form,” said Xi, who is also the chairman of the Chinese military commission.

“No one should expect us to swallow the bitter fruit that is harmful to our sovereignty, security or development interests,” he added.

As the Chinese embassy reception was being held in the capital, external affairs minister Sushma Swaraj was at the same time addressing the India-US forum in another part of the capital, where China’s policy and strategies figured in her address.

“One of the main challenges confronting the world today is the evolving situation in the Indo-Pacific. Strong India-US partnership is critical for peace, stability and prosperity in this region,” she said, alluding to the South China Sea dispute.

She also pointed out that both countries had in a significant move enunciated common principles to guide India and US’s approach during the visit of the Indian prime minister. “India and the US stand together in upholding an international rules-based system that has benefited all nations,” it said. The unspoken assertion was that China was not adhering to international law, with its disregard for UNCLOS and the judgement of its international tribunal on the maritime dispute with Philippines.

The minister also referred indirectly to China’s Belt and Road Initiative (BRI), on which India had issued a critical statement ahead of the flagship summit in Beijing. The Indian language used to critique the BRI was mirrored in the India-US joint statement.

“We have also outlined the principles that should be adhered to in undertaking connectivity initiatives, including ensuring respect for sovereignty and territorial integrity. India will continue to work with the US and other partners in support of these objectives and principles,” she said.