The CPI(M) cannot remain silent as China seeks to unilaterally re-wire multilateral rules and norms for Asia and beyond.

Three weeks into the standoff with China, the CPI(M) general secretary Sitaram Yechury has only issued a boilerplate call for “peace and tranquility” with India’s neighbours. Credit: Reuters/PTI 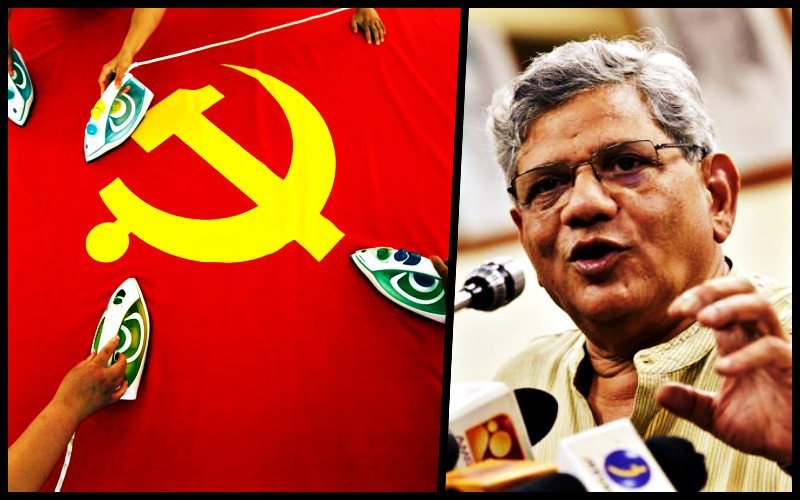 Three weeks into the standoff with China, the CPI(M) general secretary Sitaram Yechury has only issued a boilerplate call for “peace and tranquility” with India’s neighbours. Credit: Reuters/PTI

This month, the Communist Party of India (Marxist) made emphatic statements on two important foreign policy developments. The CPI(M) declared that Prime Minister Narendra Modi’s recent visit to Israel marked a “rupture” in India’s foreign policy and “demanded” an end to all security and military cooperation with Tel Aviv. If the politburo’s press release correctly criticised the prime minister’s reluctance to address Israeli occupation of the Palestinian territories, the CPI(M)’s silence on China’s still-simmering confrontation with India in the Doklam area speaks volumes about its tortured relationship with the Communist Party of China. Even after the all-party briefing by the government last week, the CPI(M) general secretary Sitaram Yechury did little but to issue a boilerplate call for “peace and tranquility” with India’s neighbours. The Marxist party routinely makes specific comments on foreign policy issues, rarely hesitating to question the gains from Modi’s travels abroad, for example, or on developments in Syria, so its failure to offer so much as a semblance of opinion on the month-long stand-off at the India-Bhutan-China tri-junction is striking.

Although the then Union home minister, Gulzarilal Nanda, went on air in 1965 to denounce the “new party” as a Chinese “inspiration” and part of Beijing’s “designs against India in furtherance of her grand strategy of establishing hegemony” in Asia, the charge that CPI(M) merely echoes what the Chinese say is not borne out by history.

Within two years of Nanda’s allegation, the CPI(M) – at the Madurai Congress of 1967 – issued a document titled “Divergent views between our Party and the Communist Party of China (CPC)”, accusing the CPC of “dictating a political line which they have worked out for our country and party”. Then, the CPI(M) broke ranks with its Chinese counterpart for two reasons: first, on account of the “considerable political influence” of the Congress Party and other bourgeois and petty-bourgeois outfits in India, and second, acknowledging that class consciousness among the Indian peasantry and proletariat had not become so acute as to trigger “immediate” revolution.

This second line of reasoning, which would anger communists like Charu Mazumdar – leading them to create the splinter Marxist-Leninist party (CPI-ML) – has less of a bearing on the CPI(M)’s approach to foreign policy. The party’s acknowledgment of the political supremacy of the Congress, however, is crucial. In the years after its split with the Communist Party of India (CPI), the CPI(M) had been severely criticised for its handling of Indo-Sino-Soviet ties, with some of its detractors going so far as to accuse it of “anti-national” tendencies. In its analysis of the 1962 war, for example, the CPI(M) refused to lay the blame on China alone. Its leading luminary at the time, E.M.S. Namboodiripad, would write:

“We are not prepared to become blind to the reality that it was the class policy of the […] ruling classes of our country that made them allies of the Tibetan counter-revolutionaries, thus initiating the process of deterioration in the India-China relations. We were and are not prepared to give up our view that the responsibility for the Chinese offensive of October, 1962, should be shared also by the Indian ruling classes who adopted a very provocative attitude in the weeks preceeding [sic] the Chinese onslaught.”

Later, as EMS and other lodestars of the CPI(M) swung towards the Congress Party’s line on Beijing, the CPC’s Peking Review would ironically label the Kerala chief minister as an “apologist and protector of international agents of US imperialism.” This criticism had little impact on the party, which continued to distance itself from communist China, especially once the Naxalbari movement started.

In response to criticism that the Marxist party was “equidistant” from the Soviet Union and China, its leaders like M. Basavapunnaiah would argue that the CPI(M) was against both the “right-revisionism” of the USSR and the “left-opportunism” of the CPC. Just as Jawaharlal Nehru articulated a political doctrine to ensure India was not swept away by the headwinds of the Cold War, the CPI(M) sought refuge – decades after Nehru’s death – in non-alignment to ensure its own political future was not jeopardised by the churning in Sino-Soviet relations.

The Marxist party also embraced non-alignment as a strategy to move closer to the Communist Party of Cuba, another NAM leader, and consequently, to develop a line to Moscow through Havana. Particularly after the 1971 Indo-Soviet Treaty, the Congress and the CPI(M) converged in their acceptance of the principle that “non-alignment” essentially signified an anti-US position, leading the CPI(M) to declare at its 1982 Vijayawada Congress:

“On several issues of foreign policy, the Indira Gandhi government takes a correct stand in conformity with the concept of non-alignment and opposition to imperialism.”

Whenever China sided with the US, the CPI(M) was unequivocal in its criticism. The party criticised China’s support for Yahya Khan and Pakistan during the creation of Bangladesh in 1971, and demurred at references to Kashmir’s self-determination in the Zhou-Nixon joint statement of 1972. When the Chinese and the US opposed the Vietnamese move to oust the Pol Pot regime in Cambodia, the CPI(M), like the Indian government, sided with Hanoi.

The irony is that as the Chinese economy liberalised and the CPC moved further and further away from the CPI(M)’s own ideas on political economy, the CPI(M) would become “remarkably reticent” in its criticism of China, a phenomenon attributed by more than one commentator to Beijing’s successes in economic development and the Marxist party’s hope that the CPC’s growth can be emulated by it in India. It is this legacy that continues to haunt the CPI(M) and ensures its silence even as Beijing adopts an openly confrontational attitude towards New Delhi.

The Marxist party’s position is actually a reflection of a wider ambivalence in the foreign policy thinking of an Indian establishment still driven by ­older conceptions of non-alignment – Non-alignment 1.0 – which sees China as a fellow traveller in global issues against the US-led West.

On account of perceived convergences with China, for example, New Delhi supported its bid to enter the World Trade Organisation in the late 1990s and facilitated, earlier that decade, its induction into the G77 group as an outside participant. Three developments supported this approach with China then: booming bilateral trade, the political space opened up by the 1993 Border Peace and Tranquility Agreement (BPTA), and the perception in New Delhi that China would be a valuable ally in negotiating intractable issues like those featured in the Doha Development Round. These developments were enthusiastically welcomed by a commentariat keen to resist US attempts to embrace India further. In the meantime, China not only leveraged its involvement in “southern” blocs like the G77 to protect its domestic economy from the pressures of globalisation but also created extractive relationships – no less ‘neo-imperialist’ than those spawned by Western MNCs – with Asian and African economies that last to this day.

Clearly, the conditions that may have warranted coordination on foreign policy concerns with Beijing no longer exist today. In South Asia and the Indian Ocean rim, both countries seem destined for an antagonistic relationship. As the Indian state recalibrates its foreign policy compass – the jury is still out on the trajectory of India-China relations – the Indian Left can scarcely afford silence. Were it to still to look at the US as the sole hegemon, ignoring the hegemonic policies of China, the CPI(M) it would be doing a disservice to the Left’s historical responsibility and role in shaping international regimes. The CPI(M) cannot remain silent as China seeks to unilaterally re-wire multilateral rules and norms for Asia and beyond. Left movements have played a seminal role in the 20th century in the creation of now-sacrosanct principles on human rights, self-determination and environmental jurisprudence, and in the integration of developing countries into the process of regime creation. It would be a pity were a misreading of China to suppress the continued contribution of India’s organised and intellectual left towards global narratives.