As China Pushes for a 'Buddhist' Globalisation, India Isn't Making the Most of Its Legacy

Simply playing the 'Dalai Lama card', as many are prone to do, will not only restrict India’s ability to manoeuvre in the outside world, but also risks undermining its own Buddhist legacy. 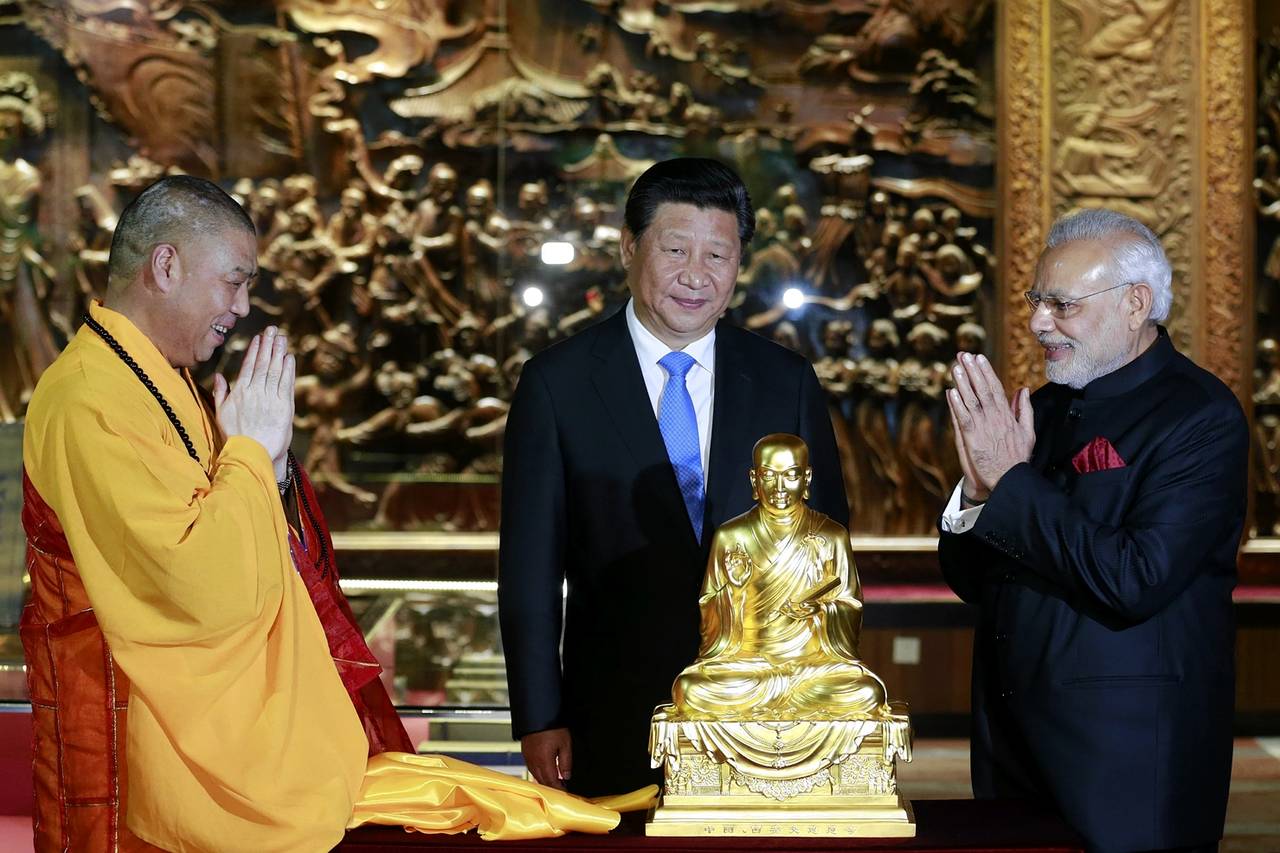 India’s worst fears are becoming a reality as China rapidly develops a plan for a ‘Buddhist globalisation’ with its financial, political and marketing clout.

Unsurprisingly, President Xi Jinping is not just asserting territorial claims in the South China Sea and expanding China’s connectivity project through the One Belt, One Road (OBOR) initiative, he is also working to make China the world leader in Buddhism. Xi has had this idea for some time now – he started building a partnership between China’s communist party and the religion when he was only 29 years old, serving as a bureaucrat in provinces. The story began when he encountered Shi Youming, a Buddhist monk who was restoring ruined temples of Zhengding County in Hebei Province.

Xi was probably also influenced by his father, Xi Zhongxun, who in 1980 had warned the party in his 11,000-word report ‘Document 19’ against banning religious activity, suggesting that this would alienate too many people. In fact, one of Xi’s father’s signature lines is said to have been, “If the people have faith, the nation has hope and the country has strength.”

The Chinese president has a strange history when it comes to religious freedom – he helped rebuild several famous temples, but ordered that 1, 500 crosses be pulled off the steeples of churches while he was chief of Zhejiang province between 2002 and 2007. It seems like Xi is biased against religions deemed ‘foreign’, like Christianity and Islam.

Using faith to legitimise political rule is not new. Many see Xi’s policy akin to Vladimir Putin’s spiritual feat of adopting orthodox Christianity, which is seen as giving him the moral legitimacy to be leader of the Slavic world. This is despite Article 14 of Russia’s constitution declaring the country “a secular state”.

Nobody knows whether Xi is a practitioner himself, but he has firmly been putting Chinese Buddhism on the global stage since 2005. At the domestic level, it looks as though Xi is turning to religion not just to bolster his rule, but also to save the party from falling. He certainly sees Buddhism as useful for arresting the flagging moral values in China’s social fabric, and to prevent the angry middle class from crumbling under the weight of a deepening social crisis and economic downturn. Having felt the pains of an ageing society, the country had to abandon the Mao’s one-child policy. More importantly, Xi intends to imbibe moral ethics among party officials – deemed necessary to bring about further economic reforms.

Under Xi, Buddhism is already making a strong comeback. The spectre of economic progress and affluence seems to be steering people’s quest for spirituality. Millions of Chinese seeking their yin guo (karmic) connections with Buddha Amitabha is becoming the new trend. The yin guo seems to have found strong secular resonance; from students to businessmen, ordinary Chinese are beginning to link their existential happiness to the inter-dependent nature of karmic cycles.

According to a Chinese Master Jingzong, China’s intent to realise its economic and political destiny would pale compared to the urge amongst millions to accomplish their spiritual fortunes. He cannot visualise the future of China without Buddhism.

It looks as though China is reimagining the nation along the lines of the imperial Chinese state. With humanist Buddhist values diffusing into society, China is likely to see in the future what we witness in Thailand and other countries today. To be sure, this is having consequences for rest of Asia, where 97% of world’s Buddhist population live and where Buddhism its their core values.

The fear is that China will translate its economic weight into spiritual might. Chinese organisations are already on a Buddhist globalisation spree – building spiritual links with the people of other nations and regularly hosting the World Buddhist Forum, which that draws thousands of monks and scholars from across the world, and planning to build Lingshan City as the Vatican for Buddhism.

China controls the World Buddhist Sangha Council founded in Sri Lanka in 1966. In 2014, it hosted the World Fellowship of Buddhists meet. Across Theravada and Mahayana countries, the Chinese are helping repair, renovate and resurrect Buddhist institutions. Beijing lobbies for countries to hold major international events such as the UN Vesak Day – to be held in Sri Lanka this year.

Taking a cue from the imperial-era practice, China could be even using the powerful Tibetan cultural connectivity for expanding its influence across the Indian Himalayan belt, Mongolia and Russia. Chinese media recently revealed that China’s communist party officials have been funding the Dalai Lama and his activities.

China’s latest initiative, the OBOR, is also nothing but the ‘political geography of Buddhism’. Nepal is proposing to link the OBOR with Buddha’s birthplace, Lumbini. Pakistan is reviving the ‘Gandhara trail’ to link the Lahore, Taxila and Peshawar networks. Taxila relics are being sent to Sri Lanka for a public exposition during the Vesak month. If Sri Lankan monks visit Taxila to celebrate purnima, top Bhutanese monks visit the Saidu Sharif monastery in Swat Valley (the birthplace of Guru Padmasambava).

Inspiration, not competition, for India

Surely, China edging in on its cultural space worries India. Prime Minister Narendra Modi was quick to gauge the importance of Buddhism after coming to power, and even put it at the centre of his diplomacy initiatives with key Asian countries. But two years down the line, his brilliant idea has seemingly been hijacked by those who are seeking to use Buddhism as a tool to counter China. Worse still, they likened Buddhism with Lamaism – perhaps due to a deficit in understanding – thus reducing the idea to playing the so-called ‘Tibet card’, ostensibly to offset China’s influence. The approach is doomed to end in failure, because Lamaism is a tool traditionally used only by rulers in the Chinese imperial court.

The ‘Lama card’ could not only restrict India’s ability to manoeuvre in the outside world, but also risks undermining its own Buddhist legacy, which rests on the eords Buddha, dharma and sangha, also known as tri-ranta (three jewels) that once spread to set the moral foundations of various Asian societies. In fact, these values still intersect with the social, political and economic contexts of many nations, as they spur the Asian quest for modernity, spirituality, democratic values and economic prosperity.

Though India wants to use its Buddhist’s legacy, it is ironic that India no longer has the fuel to spinning its own dharma wheel, let alone replenishing that of others. Here, it miserably lacks credible institutions; not a single Indian is rated amongst the world’s top Buddhist masters.

Seeking rivalry with China over Buddhism seems unnecessary. Instead, the efforts should be to reach out to the swelling number of dharma followers in China, as Modi did by reaching out to people using the Weibo microblogging site on Buddha Jayanti in 2015. We should be rejoicing at the cultural transformation in China and the positive impact this may have on India’s future ties with the country and with Asia at large.

Most immediately, India needs to take immediate steps to restore millennia-old tourist Buddhist heritage sites lying in ruins. They are directly linked to spiritual destinies of millions. By improving infrastructure and connectivity, India could tap into potential Asian pilgrims. This could provide lucrative employment to millions of our youth.

The idea of seeking counter-offensive measures to play the ‘Buddhist game’ vis-à-vis China seems misplaced. For India to seriously reaffirm its central role, it needs to embrace its own tradition of Buddha, dharma, sangha. It would be even worthwhile to envisage a pan-Indian Buddhist sangha with government patronage, if New Delhi is serious about anchoring global Buddhist affairs.

P. Stobdan is a former ambassador and a scholar of Asian affairs.