This was the first official statement from either country that there had been some de-escalation on the ground in eastern Ladakh following talks between the two sides, though no details have been provided. New Delhi: After Indian defence officials said Chinese troops were observed to have “thinned” out in at least four stand-off points, China on Wednesday said that “actions” were being taken by both sides in line with an “agreement” reached with India to “ameliorate the border situation”.

This was the first official statement from either country that there had been some de-escalation on the ground in eastern Ladakh following talks between the two sides. However, the Chinese side did not provide any detail on the “actions” it said the “two sides” had taken at the border.

Military sources had earlier stated that the density of Chinese troops at Galwan and Hot Springs had come down from Monday, which was reciprocated by India but that there had been no change in status at Pangong Tso, where Chinese troops are on India’s side of the Line of Actual Control (LAC). There had, however, been no official statement from India on these developments.

“Through diplomatic and military channels, China and India have recently had effective communication and reached agreement on properly handling the situation in the west section of the China-India boundary. At present, the two sides are taking actions in line with the agreement to ameliorate the border situation,” said Chinese foreign ministry spokesperson Hua Chunying in Beijing at the regular media briefing in response to a question from AFP.

If the Chinese readout is accurate, this suggests Indian forces may also be pulling back at the disputed points, though India has always maintained that its troops have never crossed the Indian side of the LAC. Indeed, during Manmohan Singh’s tenure as prime minister, when a boundary region standoff was defused in this way, BJP leaders – including Rajnath Singh, who is now defence minister – had criticised the Congress-led government for withdrawing Indian soldiers from Indian territory.

On Wednesday, Indian and Chinese commanders held a major general-level dialogue which was a follow-up to the talks held on June 6.

“The talks were productive as both sides exchanged views in a positive atmosphere. Both the armies are committed to end the row through talks,” a senior military official was quoted by PTI as saying.

Also Read: Here’s Why All’s Not Well for India on the Ladakh Front

After Saturday’s talks, India’s readout had not given any indication of any “agreement” on gradual dis-engagement. India had reiterated that the two sides “agreed” on the need to resolve the situation peacefully in line with various bilateral agreements and the guidance of the leadership to maintain peace and tranquillity on the India-China border regions.

This was echoed by the Chinese foreign ministry spokesperson at her briefing on Monday. “Both sides agree to implement the important consensus of the two leaders, avoid escalation of differences into disputes, work together to uphold peace and tranquillity in the border area, and create favourable atmosphere for the sound and stable development of bilateral relations,” said Hua.

Several other rounds of talks among the militaries are expected to take place in the coming days at the border.

However, there are no signs that China is willing to retract its troops from the area until Finger 4 in Pangong Tso, which is well within the territory claimed by India. It was at Pangong Tso that Indian and Chinese soldiers had come to blows in early May, which was one of the early markers of the start of the stand-off between the two armies. 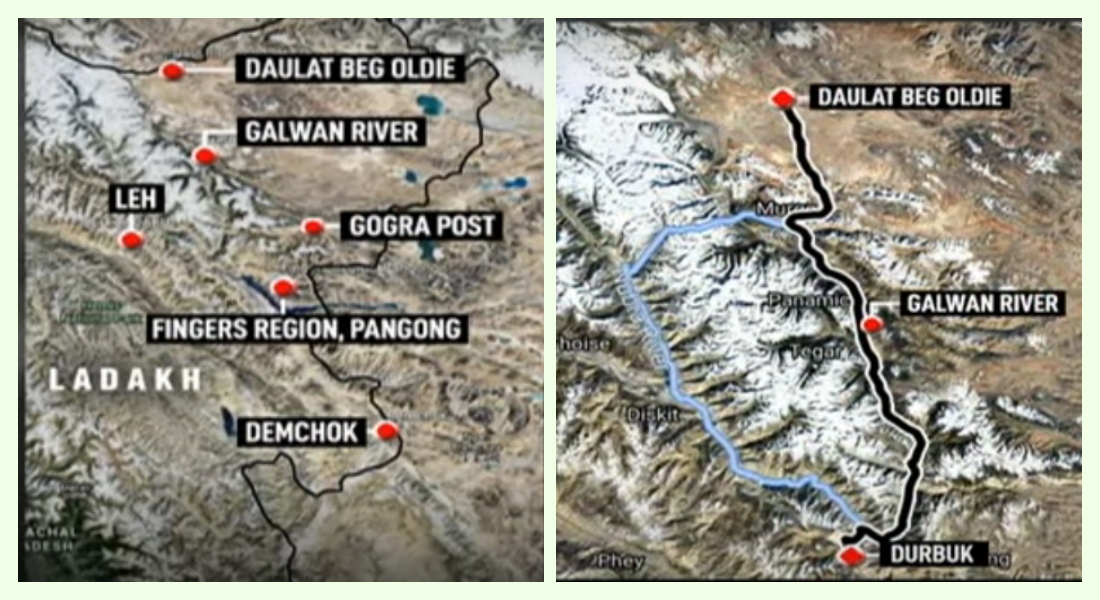 Map of the road to Daulat Beg Oldi. Photo: Wikimedia

India has sought a restoration of the status quo ante before the first detection of Chinese troops at Galwan, with the vacation of soldiers from the finger region in Pangong Tso being a top priority.

Galwan is considered strategically significant as the valley into which Chinese soldiers have reportedly entered and erected structures flanks the road to Daulat beg Oldi, the last point on the Indian side before the Karakoram Pass, which marks the border with China.