At the third 'No Money for Terror' Ministerial Conference hosted by New Delhi, India offered to house a permanent secretariat to sustain the continued global focus to disrupt the 'money trail' that makes terror outfits survive. New Delhi: At the third ‘No Money for Terror’ (NMFT) Ministerial Conference, hosted by New Delhi on November 18-19, India said a “Permanent Secretariat” could be set up in India to sustain the continued global focus on countering the financing of terrorism. It called for the “permanency of this unique initiative of NMFT” to combat global terrorism.

By disrupting the ‘money trail’, the law enforcement authorities say they can disrupt entire terrorist networks. It is on the basis of this idea that measures and initiatives to combat terrorism financing are gradually being expanded.

The NMFT conference was a step in that direction, building upon the standards laid out by the intergovernmental Financial Action Task Force (FATF) and the United Nations Security Council (UNSC). In the two-day conference, the political elite, policymakers and law-enforcement officers emphasised the importance of combating terrorism financing as they considered money vital to the survival of terrorism.

From the fragmentation of contemporary security issues towards broader constructs of terror-risk efforts, the specific subject of Combating Terror Financing (CTF) is being regularly contemplated. Intergovernmental ministerial proceedings and growing collaboration among governments are steps towards strengthening the existing national systems of anti-money laundering and CFT.

Also read: India Is Hosting the ‘No Money for Terror’ Conference. Here’s Why It’s Important.

The NMFT conference recognised that growing links between organised crimes, such as narcotics, crypto-currency, and hawala, have increased the possibility of terror financing manifold.

France and Australia, which previously hosted NMFT meetings, made detailed presentations. While the former underscored the need for investment in digital innovations, the latter highlighted the role of emerging technologies in providing new tools to terrorists.

FATF outlined the need to focus investigations into financial misappropriation and malfeasance of rogue entities. While the United Nations Office on Drugs and Crime (UNODC) highlighted the nexus between terrorists and transnational organised crime, especially drug-trafficking in the financing of terrorism, other organisations EAG (Eurasian Group), EGMONT and Europol stressed the need for harmonisation of international rules and regulations with an appeal to freeze/seize assets.

Highlighting the lead taken by India in the global fight against terrorism, Prime Minister Narendra Modi in his address to the NMFT stressed that new technologies should not be demonised, but used to ‘track, trace and tackle terrorism.’

Union home minister Amit Shah, who addressed both the opening and closing sessions of the conference, emphasised that to achieve the goal of “No Money for Terror”, the global community must understand the “Mode – Medium – Method” of terror financing and adopt the principle of ‘One Mind, One Approach’ to tackle the problem. 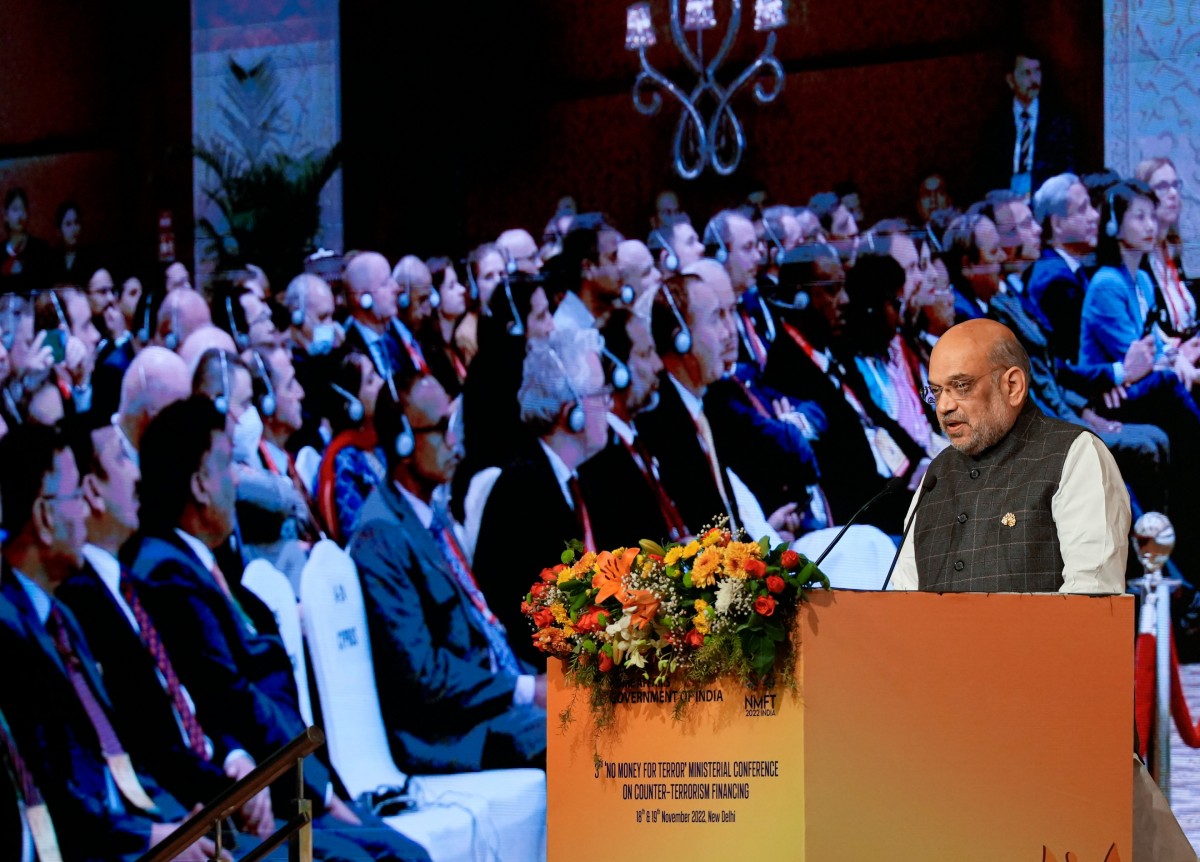 Cautioning that criminals around the world launder around 2 to 4 trillion dollars every year, a major part of which goes towards funding terrorism, the home minister said that the priority areas of the ‘NMFT’ enterprise should be fighting anonymity in financial networks, restricting and preventing the use of proceeds of other crimes, of new financial technologies, virtual assets like crypto-currencies, wallets, etc., or of Non-Profit Organisations (NPOs) to spread terror ideology/activities, eliminating the use of illegal channels, cash couriers, hawala and continuous capacity building of counter-terror and financial intelligence agencies of all nations.

External affairs minister S Jaishankar deplored the lack of conscious and coordinated efforts to counter the financing of terrorism. Alluding to UNSC resolution 2462 which spells out more explicitly than ever before the need for counterterrorism measures -“all Member States shall criminalise the wilful provision or collection, of funds to carry out terrorist acts”- he expressed strong disapproval that its implementation by the member states still remains uneven, in some cases due to the lack of political will.

An oft-quoted and still relevant truism is that ‘if fanaticism is the heart of modern terrorism, then finance is its lifeblood’, words spoken by former British prime minister Gordon Brown when he was Chancellor of the Exchequer.

The fight against terror financing reflects certain political choices –  the FATF greylisting categorically hits out at a nation’s access to international banks, raising transaction and transfer costs along with the real risk of capital flight by financial institutions seeking to avoid international regulatory scrutiny, as neither of the two aspects of CTF, freezing financial assets and tracking transactions mutually exclusive.

Also read: Explainer: FATF and the Significance of Pakistan’s Removal from its ‘Grey List’

Fewer than 20% of countries have criminalised terrorist financing and two-thirds do not effectively prosecute it. Given these realities, the regular recapitulation of terror financing risks and counter practices is important to encourage the implementation of proportionate and risk-based AML/CFT measures.

Two decades since the UNSC resolutions 1267 (1999) and 1373 (2001) along with FATF guidelines, targeting money in order to cut off terrorists’ access to funding is considered to have proven effectiveness.

Despite that, the practices of tracking terrorism financing remain basically invisible. But, it is expected to change. New Delhi, as the chair for the third NMFT ministerial conference, has proposed to “permanency of this unique initiative of NMFT, in order to sustain the continued global focus on countering the financing of terrorism,” stating that a “Permanent Secretariat” could be set up in India. Indications are that this proposal was well received by the participating jurisdictions.