While diplomatic relations are expected to deepen, trade and investment remain hobbled by global and domestic factors 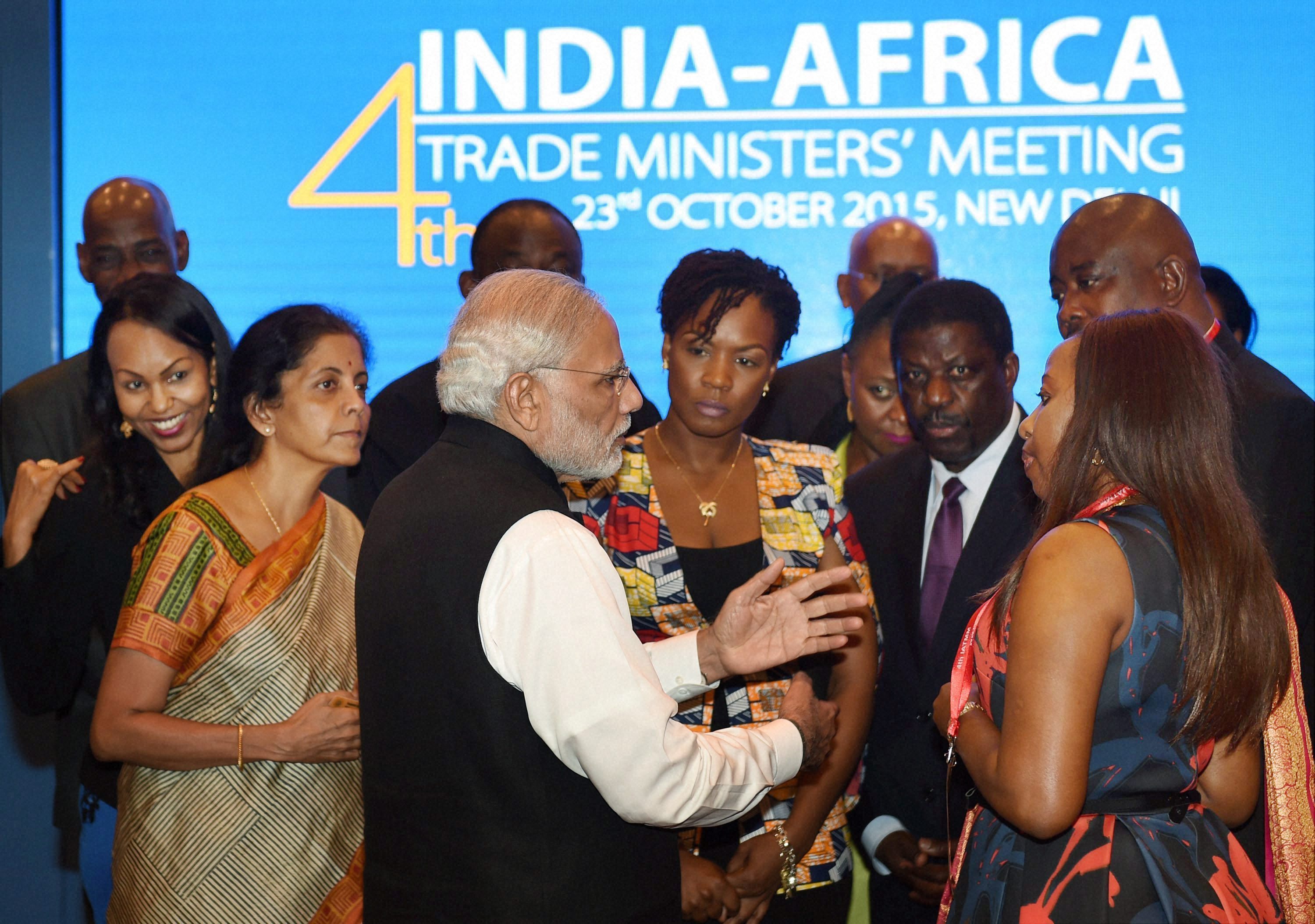 Prime Minister Narendra Modi talks with the delegates of African countries before a dinner at the India-Africa Trade Ministers Meeting 2015 in New Delhi on Friday. Credit: PTI Prime Minister Narendra Modi talks with the delegates of African countries before a dinner at the India-Africa Trade Ministers Meeting 2015 in New Delhi on Friday. Credit: PTI

The Indian government’s interest in Africa, according to the Prime Minister, is “driven by the aim of empowerment, capacity building, human resource development, access to Indian market, and support for Indian investments in Africa.” That said, he was also at pains to note, “This is a relationship that is beyond strategic considerations.”

On Friday, India’s Minister of State for Commerce and Industry, Nirmala Sitharaman characterised the India-Africa relationship as one between “old friends and old family”.

The summit, diplomats and analysts say, is directed at two distinct, but related goals: Diplomacy and economic ties.

“With regard to diplomacy, the India Africa Forum Summit could not come at a better time,” said Sachin Chaturvedi, Director General of the New Delhi-based think-tank RIS – the Research and Information System for Developing Countries.

The summit, Chaturvedi said, falls amidst a hectic calendar of global discussions that shall define the post-2015 development agenda: the Financing for Development conference in Addis Ababa in July 2015, the United Nations Sustainable Development Summit in September, the UN Climate Change Conference next month in November 2015, and the WTO Ministerial Conference in Nairobi in December.

“India hopes to engage with African governments on three levels,” he said, “The endorsement of India’s position at the WTO with regard to agricultural subsidies, an understanding of the African position on emerging mega free trade agreements like the US-led Trans Pacific Partnership, and finally a ‘Feel Good Factor’ to deepen diplomatic relations with African governments.”

India and Africa are also united in an attempt to re-work the global tax architecture to combat illicit financial flows and allow developing countries to capture a larger share of international tax revenues.

In his prepared remarks to the African press last week, Prime Minister Narendra Modi made a puzzling assertion that reveals how economic relations between India and the continent remain little understood and hostage to exaggeration by both sides.

“India has emerged as a major investor from the developing world in Africa,” he said, “Surpassing even China.”

“Our Lines of Credit to Africa, which is cumulatively USD 7.4 billion from the first two IAFS is creating infrastructure in Africa and boosting bilateral trade.”

Yet it is the investment figures that are startling.

On the face of it, Modi’s assertion that India has invested more money in Africa than China is backed by statistics: A conservative estimate of firm-wise Chinese overseas investment in Africa, values the total investment stock at $26 billion in 2013.

By contrast, Indian outbound investment in Africa, according to data put out by the Indian Exim Bank, stands at about $50 billion over a 20-year period from 1996 to 2015.

Yet the same figures show that almost 90 percent of that investment, or about $ 42 billion, was invested in Mauritius, a country of 1.2 million residents and a well-known tax haven. Mauritius, incidentally, is also one of the biggest FDI investors in India – prompting concerns that Indian companies are avoiding taxes on Indian investments by “round-tripping” their profits.

Round-tripping aside, Indian companies have been reluctant to invest in Africa, particularly at a time when global trade has slowed, global commodity prices are very low and many Indian corporates are saddled with unsustainable levels of debt.

This ambivalence is captured in the statement released by the India Africa Business Council that “appreciated the continued momentum of India-Africa business engagements despite difficult global conditions.” In this photograph from 2009, Sai Ramakrishna Karuturi of Karuturi Global stands at the site of the company’s farming project in Ethiopia. Credit: Planète à vendre/Flickr CC BY-NC-ND 2.0

The continent is littered with examples of ambitious yet ill-prepared Indian companies that have seen their investments go sour. The best known example is Bangalore-based Karuturi Global, that sought to become the world’s largest food producer by acquiring 100,000 hectares of land in Ethiopia, but ended up on the brink of bankruptcy.

More recently, Essar has struggled to close out a $750 million deal to acquire and refurbish the Zimbabwe Iron and Steel Company, a bankrupt state-owned company, while Airtel has sold 8,300 mobile towers across Africa in a bid to reduce its debt burden.

In an interview on the sidelines of the trade ministers meeting in New Delhi on Friday, Zimbabwe’s Minister of Industry and Commerce Mike Bimha’s said that the ZISCO deal was yet to be implemented.

“We did all that government had to do and Essar was also ready to move forward,” Bimha said, “The delay now is something beyond their control, which is the [fall in] commodity prices. The deal is still on but there is the issue of commodity prices which makes it difficult for them to go and borrow funds.”

Rajan Bharti Mittal, Vice Chairman of Bharti Enterprises, Airtel’s holding company, was also present at the meeting. He said the Indian private sector was eager to invest in Africa but his company was unlikely to expand investments in the near future.

“We have invested in 17 countries. Telecom is a long term play,” Bharti said in an interview, “The markets that we are in, we are engaged in those markets. As of now we are not looking for any further investment.”

Aman Sethi was The Hindu‘s Africa correspondent in 2012-2013