If Nothing Else, Indian Diplomats at Least Need a Better Sense of Humour

The MEA and its spokespersons have an unenviable and difficult job to do. Defending the indefensible is never easy. 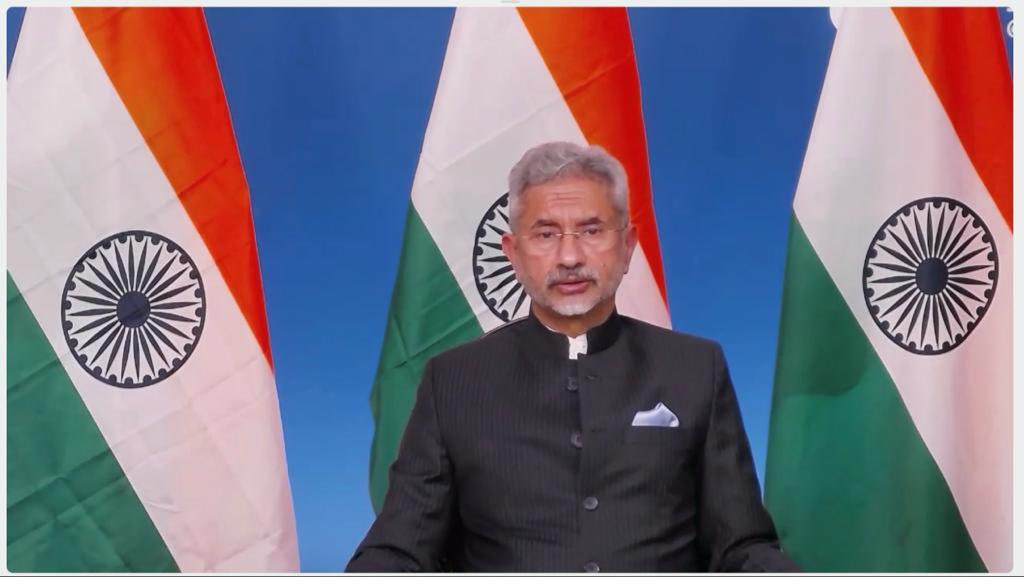 To keep the synapses in my rapidly deteriorating brain functioning I always ask myself a trick question every week, and attempt to answer it the next week. The question for this week is: is it possible for somebody to be thick skinned and thin skinned at the same time? If you’re the type who thinks logically, your answer would naturally be: No. And you would, dear reader, be wrong, for logic is a lost art in New India.

Consider our double engine government (both engines are, naturally, from Gujarat, since the one from Uttar Pradesh has been shoved into a railway siding). This government has the hide of a double-horned rhinoceros when it comes to criticism from within the country, and lets it pass by like the idle wind, swatting the occasional carping caviller with an FIR or two. But when it comes to criticism from abroad its skin is like gossamer, quivering with a carpet of ganglions, ready to take offence even at a hashtag and unleashing its dogs of war in instant retaliation. Its choice of pit-bull is the hapless Ministry of External Affairs (MEA), as suited for the job as a poodle is for the role of a chowkidar. And it does not help that the ministry lacks a sense of humour, its spokespersons as animated as marionettes on an off day.

In just the last year or so, the MEA has unleashed a fusillade of IEDs (Idiotic Explosive Demarches) at, among others, Rihanna, Greta Thunberg, Martina Navratilova, Freedom House, V-Dem Institute, Open Doors World Watch List, US Commission on International Religious Freedom, Rashad Hussain (presidential advisor to Joe Biden), at least two UN Commissions and rapporteurs on human rights and press freedom, and the Organisation of Islamic Cooperation. These organisations had disapproved of the rising majoritarianism, attacks on minorities and curbing of the press. None of these, of course, concern the MEA directly but it was roped in nonetheless to defend our slighted honour. And it does so in banal, meaningless clichés and jaded platitudes which shows its heart is not in it – that the criticism is based on ignorance of our Constitution, that the matter is sub judice, that India is the world’s largest democracy, that our institutions are robust and healthy, and so on. It’s time the MEA at least hired some scriptwriters to come up with more imaginative demarches and ripostes – raise a smile at least, if not a nod of approval.

The ministry can study, for example, the response of Maria Zakharova, the spokesperson of the Russian foreign ministry, last week to constant American claims that Russia was ready to attack Ukraine at any time. It is worth reproducing it in full with the hope that some mandarin in South Block will read it in his spare time:

“I’d like to request US and British media outlets to publish the schedule for our upcoming invasions for the year. I’d like to plan my vacation.”

The sarcasm is brilliant and the message more piercing than a stiletto, without any blood being shed. Tongue-in-cheek is always more effective than head-in-sand. For, as Winston Churchill said:

“Diplomacy is the art of telling people to go to hell in such a way that they ask for directions.”

This Russian template could have been profitably applied to respond to the criticism of our parliamentarians and their criminal records by the Singapore prime minister recently. The MEA’s response was the standard default one of “uncalled for”, “internal affairs of the country” and the meaningless summoning of the Singapore ambassador for a cup of coffee paid for by you and me. The culprit was not far off the mark, mind you. He said almost half of India’s MPs had criminal cases, whereas the Association for Democratic Reforms database says it is 43% or thereabouts. So, what was MEA crying hoarse about, in this globalised era of 24×7 news? Based on Zakharova’s template, maybe a response along the following lines would have stood us in better stead:

“The Government of India has noted with amusement the statement of the PM of Singapore and would like to invite His Excellency to Nagpur to study our culture. Criminals in our Parliament are proof of our tolerance, respect for all life (even low-life) and our compassionate justice system. Having seen both sides of the legal divide, their contribution to lawmaking is immense. To ensure the safety of our citizens, the state even provides security to murderers and rapists: there can be no bigger testament to our egalitarian values.

Deeply influenced by the teachings of the Buddha, Vivekananda and Mahatma Gandhi (peace be upon his assassin) we hate the crime, not the criminal. We ardently believe that every judge has a past and every criminal has a future – if it be in Parliament, so be it. Our Election Commission (now renamed the Election Omission of India as it has been on leave since 2014) does not distinguish between law makers and law breakers since equality is the bedrock of our Constitution, and we are still a few years away from dispensing with this hallowed document.”

Actually, the MEA and its spokespersons have an unenviable and difficult job to do. Defending the indefensible is never easy. A country’s foreign policy cannot be separated from what is going on within the country itself, and the first principle of foreign policy has to be good governance at home. As Hubert Humphrey said, “Foreign policy is really domestic policy with its hat on.” We appear to be constantly defensive on the global front these days, rejecting international rankings, railing at reputed media outlets, repeating the “internal matters” trope ad nauseam. But none of this is cutting any ice and we are living on our past capital, which is dwindling at the same speed as this government’s credibility. This could prove disastrous over time for our global standing. We would do well to remember the words of John F. Kennedy: “Domestic policy can only defeat us; foreign policy can kill us.” Like it did those 20 soldiers in Galwan last year.

The choice before the MEA, therefore, is clear: grow a thicker skin or develop a sense of humour. When you tell someone to go to hell, do it in a manner that he looks forward to it. If you can’t do that, then join the UP police.