IAF Plane Goes to Wuhan With Aid, Returns With Indians, Other Foreign Nationals

External affairs minister S. Jaishankar tweeted that the medical relief was a “strong expression of our solidarity with the Chinese people at this difficult time”. 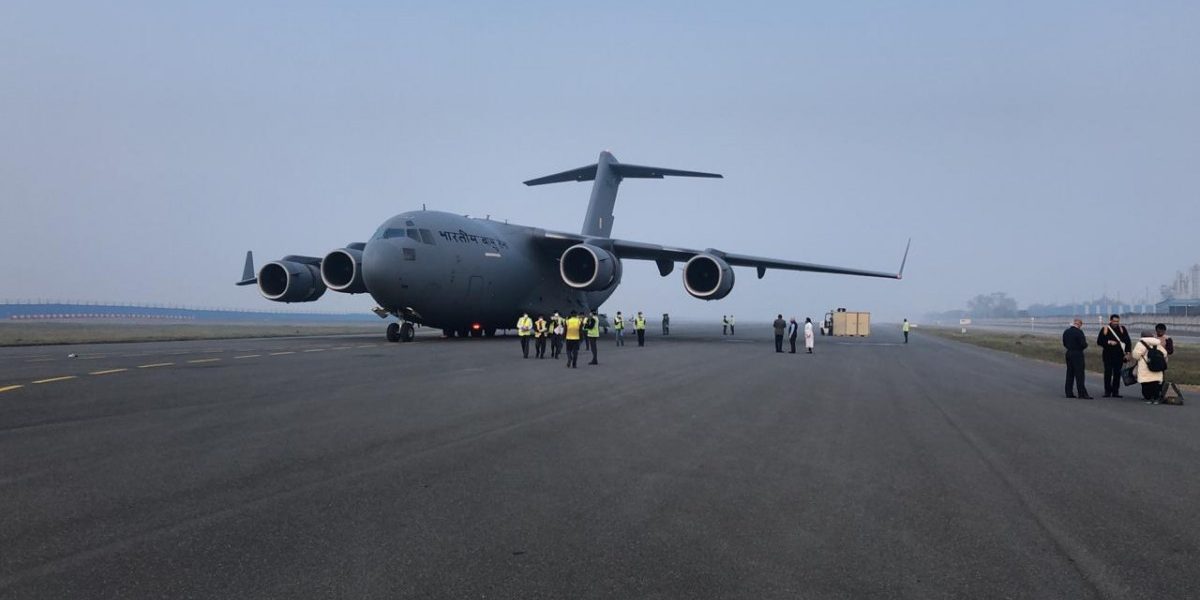 The flight after landing at New Delhi's Palam base. Photo: Ashish Yadav

New Delhi: A Indian military plane, laden with 15 tonnes of medical aid, landed in Wuhan on Wednesday evening, bringing closure to a diplomatic spat between India and China over clearance for the flight that will also bring back Indian nationals from the coronavirus-hit Hubei province.

Last Saturday, India had accused China of deliberately delaying the flight of evacuated Indians. India had submitted a plan to send a C-17 Globemaster of Indian Air Force with essential medical items to Wuhan on February 20, which would have ferried the remaining Indians back to the country on the return flight.

China had denied that there was any attempt to delay the flight, arguing that the ground situation in Hubei province was “complicated”.

Four days later, an Indian air force plane left Palam base on Wednesday afternoon for Wuhan, carrying 15 tonnes of medical assistance, comprising masks, gloves and other emergency medical equipment. It landed at Wuhan international airport at around 6:40 pm India time on Wednesday, and was back in New Delhi around 7 am on Thursday. 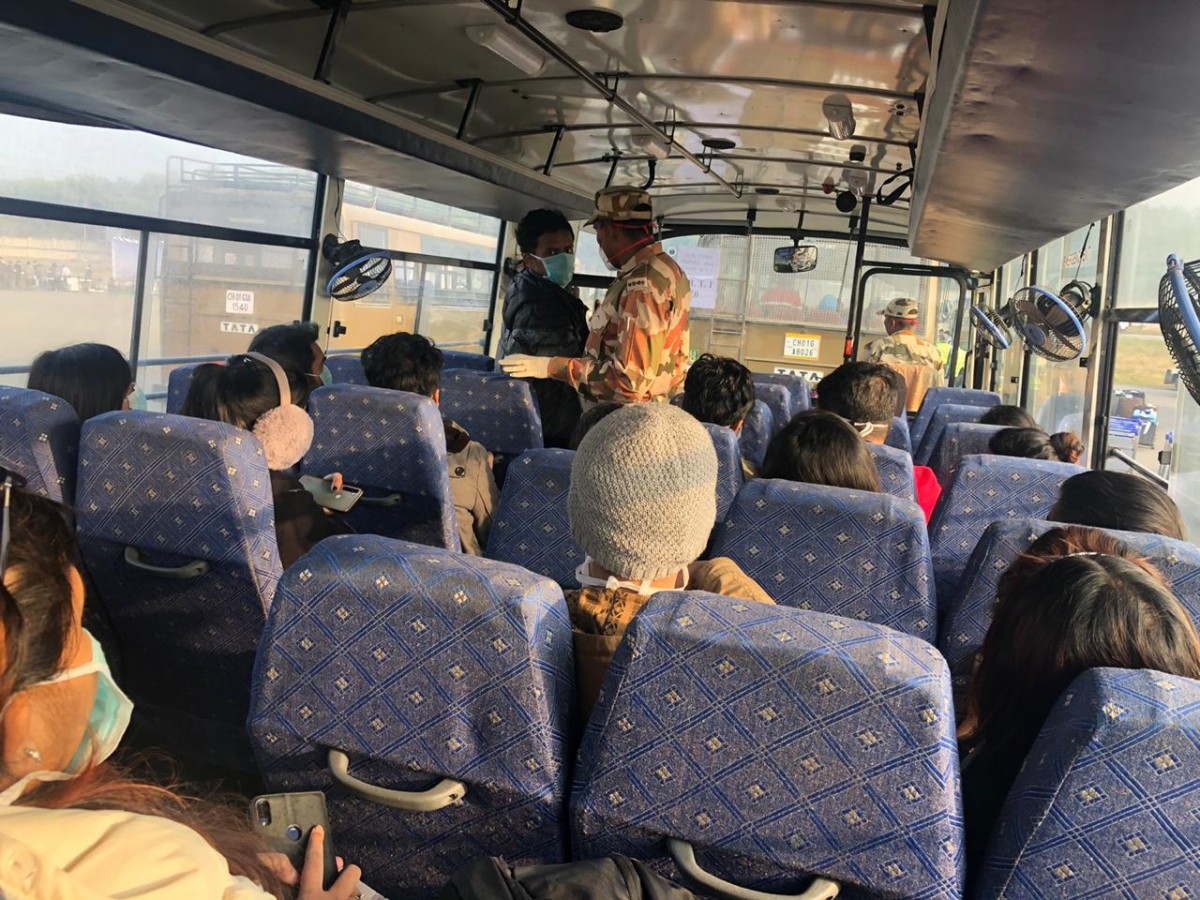 Those who returned to India being taken to a quarantine camp in a bus after landing in New Delhi. Photo: Ashish Yadav

External affairs minister S. Jaishankar tweeted that the medical relief was a “strong expression of our solidarity with the Chinese people at this difficult time”.

Along with 76 Indian nationals, there are 36 foreign nationals who travelled to India. These include 23 Bangladeshi nationals, six Chinese nationals, four women and two children, who are family members of the returning Indians. The rest are two from the Maldives and one each from Madagascar, Tanzania, South Africa and the United States.

On its return from Wuhan, the IAF flight has brought back 76 Indians & 36 nationals from 7 countries – Bangladesh, Myanmar, Maldives, China, South Africa, USA and Madagascar. Appreciate facilitation by Chinese government.

As per a Chinese source familiar with developments, the two Asian neighbours have been in touch constantly about the Indian request and communication channels have been open and smooth.

Reiterating that there was no deliberate delay in flight permission, the Chinese source stated that as the epidemic situation in Hubei remains complex, with continuous possibility of coronavirus spreading outside China.

“In this context, it is imperative for China to carefully assess the ground situation and coordinate departures of foreign nationals in Hubei by airplanes in a responsible manner, in a bid to avoid adding new complicating factor to the epidemic situation in Hubei province and global epidemic control. The process certainly takes some time, with the aim to ensure relevant arrangements made safely and smoothly, reflecting the constructive attitude and humanitarian spirit from the Chinese side,” said the official.

Stating that China takes the health of foreign nationals, like Indian students, seriously, the Chinese source said that it was better to follow WHO recommendations and avoid panic and anxiety.

Associate Professor Ashish Yadav and his wife have been waiting for this day for several weeks, having gone through a rollercoaster ride of optimism and then dashed hope. The couple from UP’s Etawah district had not availed of the first two flights due to Neha’s ill-health. 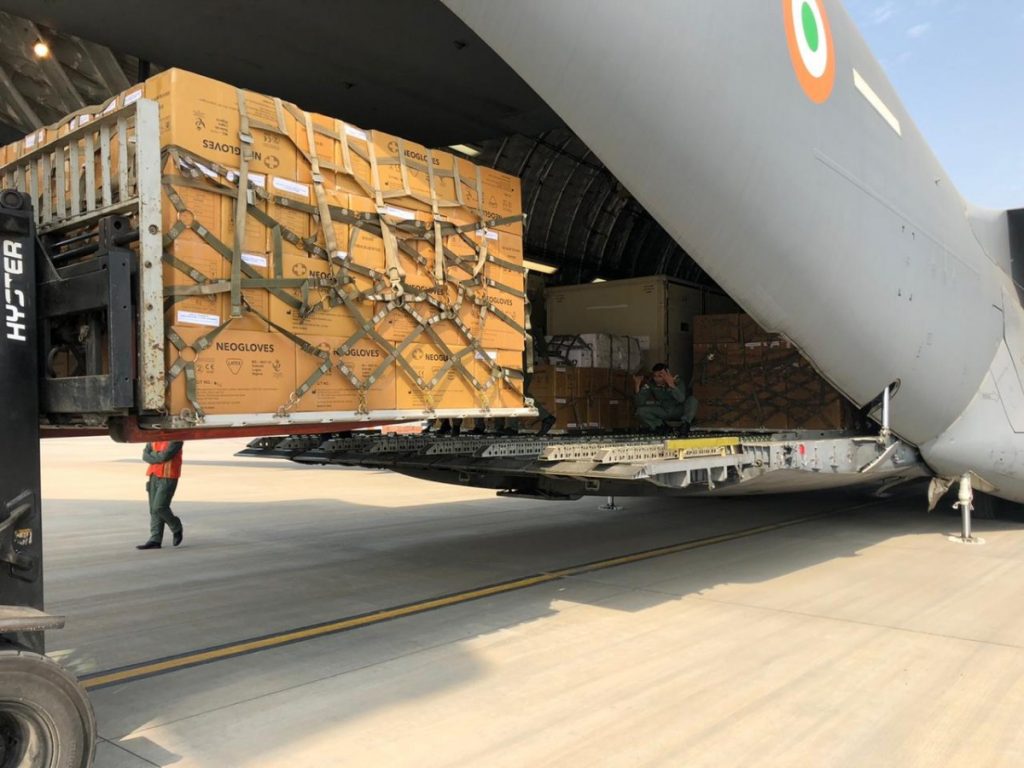 Medical supplies being loaded onto the C-17 Globemaster at Indian Air Force base in Hindon. Photo: Special Arrangement

After getting a call from the Indian embassy, the couple boarded a taxi arranged by the embassy with some other Indian nationals on the flight. These included some of the ten people who had not been allowed to board the earlier flight as their body temperature had been above the prescribed limit.

This is the first time that the Yadavs ventured out in the city after Wuhan was put under lockdown since January 23. “The roads were totally deserted, but there were so many check points which looked at papers and checked our body temperature,” Yadav told The Wire.

In total, the embassy had arranged 48 pick-up points around Hubei province, which were being coordinated from the Indian embassy in Beijing.

After reaching the airport, they got a boarding pass from airport employees wearing full body protective suits. “I don’t think we have been prodded and told to wash our hands so many times within a few hours,” he said.

The Chinese authorities at the airport are only allowing people whose temperature is 37.2 degree or less to get on flights. As a precaution, Yadav and most of the other Indians wore light clothes to avoid increasing their body temperature. “The girl who was not allowed to get on the flight last time told us that this may have been the reason for her body showing a slightly highly temperature. I didn’t want to take any chances of not being able to board the flight, so I just wore a T-shirt,” he said.

However, at least around six to seven passengers were not allowed to board the plane.

Meanwhile, an Air India flight left Tokyo on Wednesday night with a group of 138 Indians who had been quarantined on board the cruise ship Diamond Princess. A total of 16 Indians had tested positive for coronavirus and were being treated in hospital.

Air India flight has just landed in Delhi from Tokyo,carrying 119 Indians & 5 nationals from Sri Lanka,Nepal, South Africa&Peru who were quarantined onboard the #DiamondPrincess due to #COVID19. Appreciate the facilitation of Japanese authorities.
Thank you @airindiain once again