Hydropower Projects in Jammu and Kashmir Fast-Tracked by India

Worldwide, hydropower projects are running into problems and being scaled back, but India is doing the opposite in what appears to be a determination to maximise the benefits of the Indus Waters Treaty. 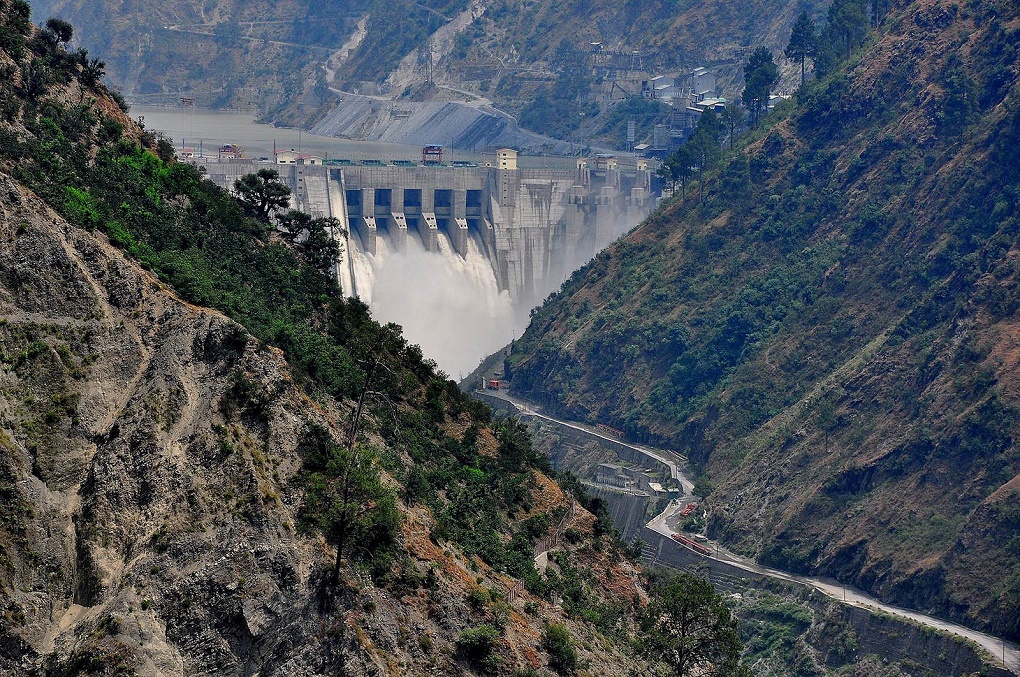 The Baglihar dam, also on the Chenab, in J&K. Credit:: ICIMOD

At a time when hydropower dams are running into challenges across South Asia, and being dismantled in the US and Europe, the government of India is planning speedy construction of eight hydroelectricity projects in the Himalayan state of Jammu and Kashmir. They will have a total installed capacity of 6,352 MW at a projected cost of INR 567 billion (USD 9 billion).

Most of the new projects are in detailed project report (DPR) stage. That is the stage after the initial studies but before any major construction.

“Presently, Jammu and Kashmir is the only state where development of hydropower is a priority. Elsewhere in India, the focus is on solar power,” an official in Jammu and Kashmir State Power Development Corporation (JKSPDC) said on the condition of anonymity.

“There is no doubt that the speed with which these projects are being studied now is unprecedented.  For example, the central power ministry was literally after our lives while seeking the submission of NoCs [No Objection Certificates] for Sawalkote and Kirthai projects,” the official said. He added that technical and economic clearance (TEC) for these projects was done within weeks in 2016 following a dithering of over 50 years from when the projects were first identified in the 1960s.

He said that the government of India has already issued grants to cover the entire financing of the projects to Jammu and Kashmir for completing three projects with a total capacity of 2,164 MW (Pakal Dul, Kwar and Kiru) by 2022-23 and has assured the state it will fund the rest of the projects within the next decade provided the state commits to joint ventures with Central Public Sector Companies like the National Hydroelectric Power Corporation (NHPC), the Satluj Jal Vidyut Nigam (SJVNL) or others.

“It is hard for us to generate resources. For example, we can’t produce 30% of the INR 220 billion (USD 3.42 billion) investment needed for the Sawalkote power project though we could get the rest 70% as loan from the market. So, the central government has assured us of funding on the condition that we go into joint ventures with central PSUs. After all, the investment would enable them to have control over these resources,” the official said.

Shah Faesal, the managing director of JKSPDC refused to comment on whether the urgency being shown for power development was because of political reasons.

“I can’t comment on that. But yes, we are keen about the speedy development of power projects in our state. Being an important organisation for the state, JKSPDC is trying to contribute for the development of the resources of the state,” Faesal said.

How will Pakistan react?

Shakil Romshoo, the head of the Earth Sciences department at Kashmir University, believes that Pakistan is certainly going to object once these projects are finalised and the plans put in public domain. “Given the political history shared by the two countries and the recent developments over water sharing between India and Pakistan, of course, Pakistan will raise objections,” Romshoo said.

Romshoo’s colleague in Kashmir University, Mohammad Sultan Bhat, who heads the University’s Geography department, said that Pakistan will react sharply to projects like Bursar and Sawalkote notwithstanding the fact that India says they are going to be constructed as per the provisions of the 1960 Indus Waters Treaty (IWT) between the two countries. Chenab and Ravi rivers are parts of the larger Indus basin.

In the Chenab basin, some of the new projects are being planned to produce hydropower through the “run-of-the-river” technique, in which a river’s water is not held back in a reservoir, but diverted through a tunnel, after which it turns turbines to generate electricity before flowing back into the river.

India has maintained throughout that it is sticking to the terms of the IWT, but Pakistan has raised objections to earlier projects, arguing that the dams can potentially hold back water, and that in some cases the gates built into the dam wall to occasionally flush out sediments contravene technical provisions of the treaty. These matters have led to protracted negotiations, and have then gone to the Permanent Court of Arbitration at The Hague when negotiations failed, with both countries scoring points at different times.

“We have seen in recent times that Pakistan has raised strong objections to power projects like Baglihar and Kishanganga. They are going to do the same, especially at a time when India has openly said that it is going to use water as a strategic tool to put pressure on Pakistan,” Bhat said.

Even within India, there is controversy over two of the projects. The first is the 1,856 MW Sawalkote project in Ramban and Udhampur districts of Jammu and Kashmir. According to the JKSPDC official, the Sawalkote hydroelectric project is run-of-the-river. But green groups contend that the environmental impact assessment (EIA) report about the project is “misleading”. In January 2016, a group of eminent people from across India had written of their concerns regarding the “deeply flawed” EIA report for the Sawalkote project.

One of the major concerns expressed by the environmentalists was regarding the run-of-the-river status of the Sawalkote project. “The EIA executive summary claims that Sawalkote is a run of the river scheme, but this claim is totally wrong and misleading considering that it involves 192.5 metre high dam, 1,159 hectare (ha) reservoir with 530 million cubic metres of storage capacity and a massive power house close to the toe of the dam,” the citizens had written in a letter to Jammu and Kashmir State Pollution Control Board (JKSPCB).

“How can such a project be called run of the river project? This is clearly wrong and [a] misleading claim.”

The letter had also expressed concern over the changes in land requirements, submergence area and the number of families affected. In the EIA, it was anticipated that 900 ha would be submerged due to the project and the total land requirement for the project would be 1,099 ha. But both the submergence area and the land required for the project has been increased by 29% and 23% respectively. It has now gone up to 1,158.75 ha and 1,401.35 ha respectively in the final report. Interestingly, none of the concerns of the group have been addressed in the final project report accessed by The Third Pole.

There are questions over the Bursar hydroelectric project as well. In this project, a storage dam with a reservoir is being planned on the Chenab basin in Kishtwar district of Jammu and Kashmir. Along with Ujh, this has been declared a national project. According to an NHPC document, this project has been designed to utilise the provisions of the IWT as mentioned in Annexure-E of the 1960 treaty.

Through this project, the NHPC document says, the flow of water can be regulated not only for the benefit of this project but all downstream projects such as Pakal Dul, Dul Hasti, Ratle, Baglihar, Sawalkote and Salal hydroelectric projects, thereby enhancing the potential of all downstream schemes. The dam site is located near village Pakal on the Marusudar river, the biggest tributary of the Chenab. The storage provided, says the NHPC document, is intended to be used for additional power generation during lean flow months and releasing regulated flow downstream.

Environmentalists have again raised concerns. “We had raised strong objections about Sawalkote which have not been considered. For Bursar also, we have some concerns. You see, this is the first dam which is going to be built in our mountainous state. So, there are concerns about local environment and ecology, environmental flows, seismic concerns etc.,” said one of the members of a team in Kashmir University that has prepared a report on the Bursar project and submitted it to NHPC last week.

Another official in JKSPDC, who refused to be named, said that around 1.5 million trees will be cut for the construction of the Bursar storage project. “Obviously, since it is a storage project, the environmental costs are going to be huge,” he said.

Other projects on the Chenab basin which are being investigated for speedy development include Pakal Dul, Kiru, Kwar, Kirthai I and Kirthai II – all in Kishtwar district. The developers of most of these projects have already applied for clearances from the central Ministry of Environment, Forests and Climate Change as well as the Jammu and Kashmir forest department. They have submitted techno economic appraisal reports. For the Pakal Dul and Kiru projects, the developers have obtained permission for on-site activities from the Jammu and Kashmir State Forest Corporation.

According to the anonymous JKSPDC official, Pakistan may be equally worried about the huge multi-purpose Ujh dam in Kathua (Jammu), though it is on the Ravi, one of the “eastern” rivers allocated to India for its exclusive use. Ujh is one of the main tributaries of the Ravi. So, under the IWT, its waters are for India’s “exclusive” use. But right now, it flows unhindered to Pakistan before meeting the Ravi. That is likely to be affected by the project. However, given the provisions of the IWT, Pakistan may not have any ground for complaint.

“This dam is quite huge as it is going to submerge a 41 square kilometre area with 116 metre high dam. I have never seen such vigorous activity regarding the investigation process of this project ever since it was envisaged some 20 years back,” the official said. Twelve villages may fall in the submergence zone.

The Ujh project is a multipurpose project that has also been given the status of a national project, which means it will be overseen by the CWC as well. It will be the first multipurpose hydro project in Jammu and Kashmir. Initial investigations for a dam on the Ujh had been carried out as far back as 1927. A detailed investigation for a dam and power plant was carried out by the Central Water Commission (CWC) in 1960 and the earlier DPR for this project was prepared by the Jammu and Kashmir government in co-ordination with CWC in 1966 to produce 117 MW.

Then the project went on the backburner, before the CWC restarted investigations in 2009. It is now slated to generate 212 MW of hydropower, irrigate 31,380 ha and supply drinking water to residents of Kathua district.

A history of squabbles

The IWT has been hailed worldwide as a model of water sharing between countries that have warred with each other four times since the creation of Pakistan in 1947. Still, hydro projects in the Indus basin have been beset by objections, mostly by Pakistan, but now also by India as Pakistan plans a huge cascade of dams on the Indus.

As for the projects in India, Pakistan has consistently raised objections to those on the western rivers.

But most policymakers in both countries have agreed that sticking to the IWT is the best way forward.

There was a temporary question mark on that last year, after a spate of terrorist attacks blamed on Pakistan but denied by it led to demands in India to scrap the IWT. The Indian government suspended the regular meeting of the commissioners appointed by both governments to oversee the working of the treaty.

The treaty did ride out that crisis.

But the verbal altercations raised the level of tension, and the next time there was an objection from Pakistan, the treaty’s mediator – the World Bank – was drawn into the dispute.

This period was followed by policymakers in both India and Pakistan reiterating their support to the IWT.

However, the Indian government decided to hasten the hydropower projects it can build without contravening any of the provisions of the treaty.

This article was originally published in The Third Pole.