Nearly 2,000 Rohingya have gone to Bangladesh in the past few months, according to a Rohingya youth leader who left for Bangladesh in October after six years in the northern Indian city of Jammu. 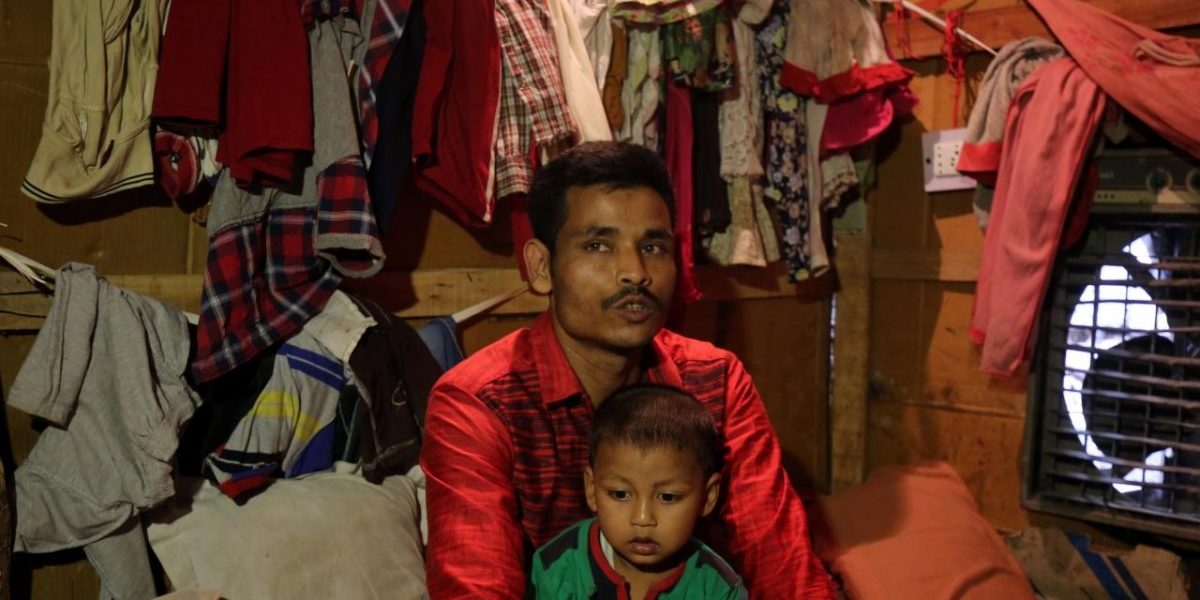 Sahidullah, a man from the Rohingya community, holds his son on his lap as he speaks with Reuters inside his shack at a camp on the outskirts of Jammu October 5, 2018. Credit: Reuters/Mukesh Gupta/Files

New Delhi: Hundreds of Rohingya Muslim families have left India for Bangladesh since seven Rohingya men were deported to their home country Myanmar in October, community leaders said on Thursday, and more were preparing to flee a crackdown.

The Narendra Modi government regards the Rohingya as illegal migrants and a security risk, and has ordered that tens of thousands of them who live in scattered settlements and slums be identified and repatriated.

This month it deported a Rohingya family of five to Buddhist-majority Myanmar, the second expulsion in three months.

That has worried the community given that the United Nations says conditions are not conducive for them to return to Myanmar after fleeing violence and persecution over the years.

“Many people in India have given statements like launching a ‘kill movement’,” said Mohammed Arfaat, a Rohingya youth leader who left for Bangladesh in October after six years in the northern Indian city of Jammu.

Arfaat, a 24-year-old father of two, was referring to a call by the Jammu Chamber of Commerce and Industry for an “identify and kill movement” against the Rohingya.

“We already faced so many problems in our country and we needed freedom to live elsewhere. But, if like in Myanmar, you are fearful again, why would you live there?,” Arfaat said by phone from Cox’s Bazar in Bangladesh.

Nearly 2,000 Rohingya have gone to Bangladesh in the past few months, according to Arfaat and another youth leader.

The United Nations High Commissioner for Refugees (UNHCR) in Bangladesh said on Thursday the Rohingya arriving from India were “all safe and sound” and receiving assistance.

“Very small numbers of people coming in from Myanmar now,” UNHCR spokesman Firas Al-khateeb said by phone from Cox’s Bazar. “The majority of them have come from India this month.”

India estimates that 40,000 Rohingya live in camps across the country, mainly in Jammu, Hyderabad and the capital, New Delhi. Only 16,500 have UNHCR identity cards the agency says can help “prevent harassment, arbitrary arrests, detention and deportation”.

The Indian government does not recognise the cards and rejects a U.N. position that deporting the Rohingya violates the principle of refoulement – sending refugees back to a place where they face danger.

Sahidullah, who lives in Jammu and cleans an auto showroom to support his wife and four children, said he did not want to leave India.

“I want to live here as long as needed,” said Sahidullah, who goes by one name. “Many people have left and my relatives will be deported too, but it’s not yet safe in Myanmar.”

In August, a UN report accused the Myanmar military of mass killings and rapes of Rohingya with “genocidal intent” in 2017 in an operation that drove more than 700,000 of them to flee to neighbouring Bangladesh, according to UN agencies.

Myanmar has denied the charges, saying its military launched a counter-insurgency operation after attacks on security posts by Muslim militants.