In a bilateral meeting with Imran Khan, the US president refused to endorse India’s assertion that Pakistan was a hub of terrorism and repeated his readiness to mediate between the two countries.

New Delhi: A day after the US president effusively praised Indian Prime Minister Narendra Modi’s rally in Houston, it was the turn of Pakistan Prime Minister Imran Khan to be plied with accolades. Sitting next to him, Donald Trump expressed his surprise at Modi’s “very aggressive statement” against Pakistan and refused to endorse India’s repeated assertion that their Western neighbour was a hub of terrorism.

On Sunday, US president flew down to Houston to attend a rally of over 50,000 Indian Americans in honour of visiting Indian Prime Minister Modi. He got a standing ovation from the audience for pledging to combat “radical Islamic fundamentalism”. The Indian prime minister also asked the audience to give him a second standing ovation for his fight against terrorism.

As Trump sat in the first row, Modi stated that there were “some people” who were “unable to manage their country” and were unhappy over Kashmir developments and “nurtured terrorism”. While he didn’t specifically name Pakistan, his allusion was unmistakable. “Whether US’s 9/11 or Mumbai 26/11, where were their conspirators from? It is time that there should be a decisive fight against terrorism,” he said as Trump used a translation device to listen to Modi’s Hindi speech.

Also read | The What, Why and How of ‘Howdy, Modi’

A day later in New York, on the sidelines of the United Nations General Assembly, Trump sat down with Imran Khan for talks for the second time in three months. The US president is also scheduled to sit down for formal delegation-level talks with Modi on Tuesday.

In answer to a question of whether he was concerned about the human rights situation in Kashmir due to security restrictions by India following the change in constitutional status, Trump referred to Modi’s remarks at the ‘Howdy Modi’ event in his answer.

“I didn’t know that I was going to hear that statement, I have to say. I was sitting there, and I heard a very aggressive statement yesterday from India from the prime minister,” he said, adding that “it was very well received within the room”

The “room” was Houston’s NRG Stadium, which Trump noted was filled with “59,000 people”.

He repeated several times that Modi had made a “very aggressive statement”.

But, he added, that his hope was that India and Pakistan could come together “to do something that is really smart and good for both”.

Earlier, in an answer to a query about improving human rights situation in Kashmir, Trump replied, “Sure. I would like to see everything work out. I want it to be humane. I want everybody to be treated well”.

To another question of whether he endorsed or disagreed with Modi’s statement that Pakistan was the hub of terrorism, Trump demurred – and indicated that he would rather give the title to Iran. “I have been pointing much more at Iran… I have been saying that it is the number one state of terror in the world and the (nuclear) agreement we had, did not cover that. It was doing very poorly and now Iran is doing very poorly,” said Trump.

Trump also praised Imran Khan for being a “great leader”, a “good man” and a “good athlete”. “I had heard they have made great progress (in fighting terrorism) and under this leader, I think he is a great leader, I think he wants to make great progress. There is no solution any other way. it will only lead to death and chaos and poverty. He understands it,” said the US president. 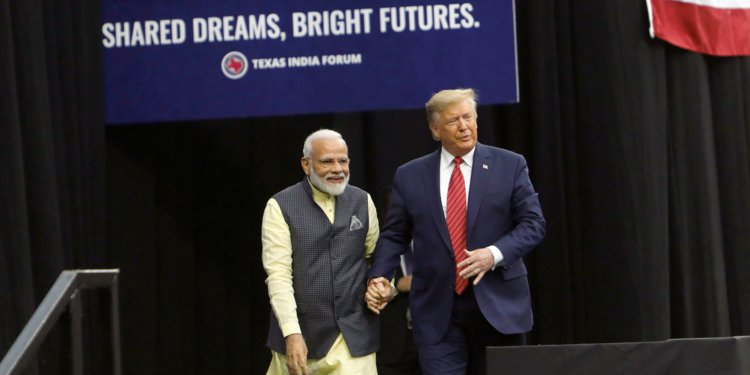 He noted that Pakistan had not treated the US “too well either”, but “maybe there was a reason”. “I think they (Pakistan) have a reason. People before me didn’t…but they didn’t know what they were doing,” he stated.

When Trump had unveiled the new South Asia Strategy in 2017, it was based on the premise that the US had to wield the stick more than the carrot to prod Pakistan to take action against terror groups targeting Afghanistan. However, the ‘tough love’ Pakistan policy got diluted since then, with the need to get Taliban to the negotiating table rising in priority for Washington.

However, the US-Taliban peace talks collapsed earlier this month, which Khan being blamed in Trump’s tweets.

“I don’t think you ever had a president that felt the way I do in a positive way about Pakistan. I don’t think you have. I have looked back,” said Trump to the array of Pakistani media persons.

He also added that he had a “very good relationship with India too”. On Sunday morning, he had told the audience of Indian Americans that they “never had a better friend (in White House) than President Trump”.

Turning to Khan, Trump said that he “trust this gentleman” right here. “I did trust Pakistan. I know. I have a lot of Pakistani friends living in New York. Great negotiators by the way. They are among the best negotiators in the world. You know what. It is all going to work out, but if I can help, I would like to help out”.

Trump has been repeatedly announcing his readiness to mediate between India and Pakistan – an interest that he had stated even during his election campaign. These offers had further intensified over the last few months.

At his last meeting with Khan in July, Trump had even claimed that Modi had asked him to mediate on Kashmir. This was immediately dismissed by India.

The US president stated that his offer to arbitrate still stands, but no progress could be made unless India agreed.

Also read | At Houston Rally, Modi, Trump Talk Terror, Economy, and Bat for Each Other Politically

“If I can help, I can certainly do that. and it will be dependent on both these gentlemen. One without the other doesn’t work if we do a mediation or arbitration, but certainly, I would be willing to help if both wanted India and Pakistan. I am ready, willing and able. It’s a complex issue and it has been going on for a long time, but if both wanted it, it would ready to do it,” said Trump.

According to the US president, he was an “extremely good arbitrator”. “…I have never failed as an arbitrator. I have been asked to arbitrate disputes pretty big ones for friends,” he said.

When a Pakistani journalist told him that he could get a Nobel Prize if he solved this imbroglio, Trump agreed. “I think I will get a Nobel Prize for many things, if they gave it fairly, which they don’t. They gave one to Obama upon ascendancy to the presidency and he had no idea why he got it. You know what, that’s the only thing we agree on”.

Khan told the US president that it was the responsibility of the US as the “most powerful country” to “put out the flames of the world”.

“Unfortunately, India is refusing to talk to us…I think that this is a beginning of a crisis and we honestly believe that the crisis is going to become bigger,” he said.

Earlier, Khan pointed that he would be discussing the situation in “all three neighbours, Afghanistan, India and Kashmir and of course, Iran”.

“He lives in a very friendly neighbourhood,” quipped Trump, to laughter in the room.