A survey of the press coverage of the alleged Indian spy captured by Pakistani authorities demonstrates that despite more or less balanced reports emerging from regional and western media outlets, Pakistani newspapers have taken his 'confession' while in Pakistani custody at face value, and not questioning whether some element of coercion might have been in play. 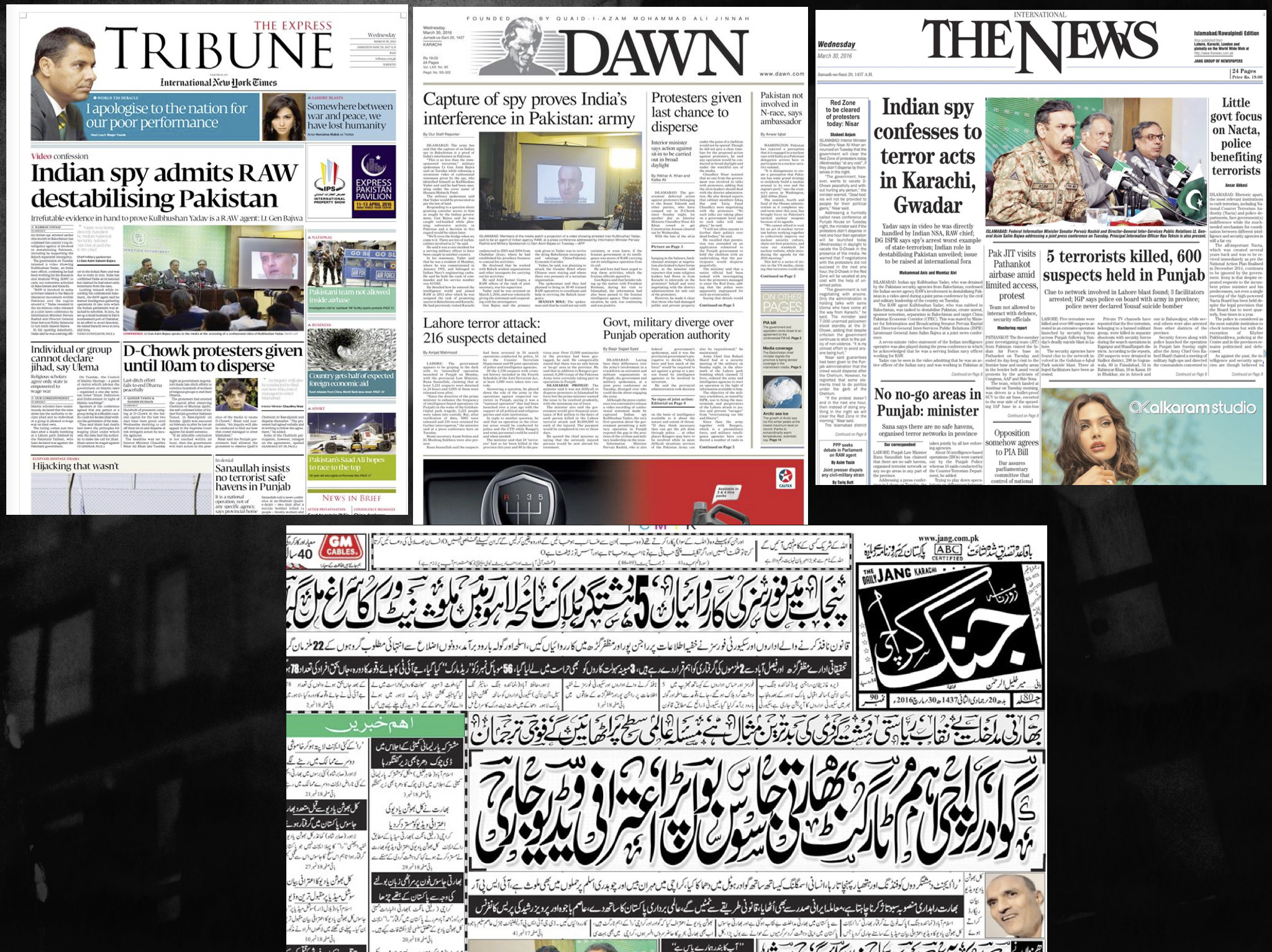 New Delhi: A survey of the press coverage of the alleged Indian spy captured by Pakistani authorities demonstrates that despite more or less balanced reports emerging from regional and western media outlets, Pakistani newspapers have taken his ‘confession’ while in Pakistani custody at face value, not questioning whether some element of coercion might have been in play.

The ‘confession’ of Kulbhushan Yadav is major news for a number of Pakistani media outlets – unlike India where most newspapers downplayed its importance. The news was first lead more or less in most papers, which reported at length on the details of his supposed intelligence assignments for RAW since 2003. ‘Indian spy admits RAW destabilising Pakistan’, was the Express-Tribune headline, ‘Indian spy confesses to terror acts in Gwadar’, was the headline of The News, ‘Yadav confesses to RAW terror role in Balochistan’, said The Nation, ‘Gwadar aur Karachi eham target, Bharti jasoos bol pada, aitharafi video jari’ (‘Gwadar and Karachi the main targets, India spy says in confessional video’) was how Jang, the leading Urdu daily reported the Tuesday’s presss conference where the video was released.

‘Capture of spy proves Indian interference in Pakistan: Army’ said Dawn, Pakistan’s most sober newspaper – its headline departing from the rest by attributing the information about Jadhav (and the assessment of his ‘confession’) to the army. The newspaper quoted the military spokesman as saying Jadhav’s confession “is solid proof of Indian state-sponsored terrorism”. The article reveals that the captured India will be ‘prosecuted as per the law of the land’ and decisions regarding consular access for Indian authorities will be taken at a later date.

The Daily Times presented the capture and confession of Yadav as a major coup for the Pakistani security authorities. The newspaper’s report claims that, ‘In past, Pakistan did arrest many an operative of RAW but never ever a serving officer of the rank of a lieutenant colonel has been nabbed’. The issue surrounding consular access is ignored but the information minister, Pervez Rashid is quoted saying that Pakistan had fulfilled its responsibility by conveying Yadav’s arrest to the Indian ambassador.

The News, the Express Tribune and others have published similar articles, each reiterating the stories that have emerged in Yadav’s video confession. Repeated emphasis is given to an alleged plot to target the Gwadar port in a bid to destabilise Chinese economic relations with Pakistan. Considerable attention is also given the fact that Yadav has claimed to be a serving officer in the Indian Navy, not due to retire until 2022.

The News is the only newspaper to run an editorial on the event,which, even though it conceded to not not knowing “the whole truth”, it saw as something with which Pakistan has “changed the usual equation of power in the region”.  Pakistan, “for once [is] in a position to be asking the questions rather than being forced to answer them”:

The point of releasing the video now must also have been to show the world that it is not just Pakistan that needs to investigate the role of its citizens in attacks on Indian soil; India will now have to reciprocate and investigate its alleged involvement in Balochistan. It is still too early right now to say with any certainty what the whole truth is. But with this one press conference we have changed the usual equation of power in the region and for once are in a position to be asking the questions rather than being forced to answer them.

In all papers a cautious line has been taken regarding the level of Iranian knowledge and involvement surrounding the fact that Yadav has admitted operating from Iranian soil, though The News, the English newspaper published by the influential Jang group, saw an explicit link:

What is more interesting for now is the timing, and more importantly, the announcement of his capture. It took place just one day before the visit of Iranian President Hassan Rouhani and a statement released by Pakistan said that we brought up the matter of RAW involvement in Balochistan. Rouhani, however, denied that it was ever mentioned. This contradiction is significant since Iran has always accused Pakistan of facilitating the cross-border movement of Sunni militants, something we can now pin on India. With an agreement on the gas pipeline nearing completion, it is important for us to pacify Iran.

It also appears that the significance of Pakistani intelligence officials accessing the site of the terror attack in Pathankot has been overshadowed in the media by the release of the video confession. Notably, yet perhaps unsurprisingly, the denial from Indian authorities that Yadav was a RAW agent, and concerns over the validity and authenticity of his confession, have not surfaced in the Pakistani newspaper reports surveyed.

However, in an editorial the Daily Times had a highly positive assessment of the JIT’s visit to Pathankot:

“Despite concerns by India’s opposition parties, the joint probe by Pakistani and Indian security officials can only be welcomed. It is an unprecedented development in the history of bilateral relations between the two neighbouring states who have always indulged in blame-game instead of adopting a better course of action of taking to task those who are responsible for fuelling tension between Islamabad and New Delhi. Instead of criticising this initiative, there is a need to welcome cooperation between the security agencies from both states. India needs to cooperate with Pakistan in finding further clues to those who were involved in spreading terrorism while Pakistan needs to take action against home-based militants. One thing must be clear that the issue of terrorism is a common challenge for both states and only joint efforts can yield positive results for the elimination of this threat. Both India and Pakistan should go ahead with the peace process and work on a common agenda of defeating peace spoilers.”

In its editorial, The News sought to link the Pathankot probe and the arrest of Jadhav, urging his confession be used “as leverage to ensure that India does not unnecessarily blame us for impeding the investigation”:

“Since we are now cooperating with India on the Pathankot investigation and our probe team has reached the site of the attack, we can use Yadav’s confession as leverage to ensure that India does not unnecessarily blame us for impeding the investigation. The point of releasing the video now must also have been to show the world that it is not just Pakistan that needs to investigate the role of its citizens in attacks on Indian soil; India will now have to reciprocate and investigate its alleged involvement in Balochistan.”

Notably, yet perhaps unsurprisingly, concerns over the validity of the video held by Indian officials who described it as ‘forged and doctored’ and representing ‘an internal game within the Pakistani establishment’, did not figure in the Pakistani newspaper reports though many websites noted by Wednesday evening that India had officially cast doubts on the confession.

Asian News InternationaI has reported that for Pakistan, the focus is on Iran, not India. The outlet has quoted the Director of Gilgit Baltistan National Congress, Senge Hasnan Sering, saying that it is not an issue of India but ‘an issue of how Pakistan is adjusting itself between Saudi Arabia and Iran’s developing strategic conflict’. Sering has said that capturing a RAW agent is a way to ‘embarrass’ Iran and ‘build pressure’ at a time when Pakistan ‘has to choose a side between Saudi Arabia and Iran’.

In an article covering the meeting between the Pakistani Chief of the Army Staff, General Raheel Sharif and the Iranian President Hassan Rouhani on the 28th March, the Sri Lanka Guardian has reported that the topic of the alleged Indian spy was not discussed. Rouhani is quoted saying, “The rumours start swirling whenever we come closer to Pakistan”. Although General Sharif requested that the Iranian President restrain the Indian Research and Analysis Wing (RAW) from using Iranian soil against Pakistan, Rouhani insisted that Tehran enjoyed brotherly relations with both Pakistan and India but cooperation with Pakistan ‘would benefit the entire region’.

Coverage in the Bangladeshi media has been sparse, with the Daily Star running a brief but balanced online article covering accusations, denials and concerns of the parties involved, most likely owing to the few concrete details available at present.

Western media coverage has been limited on the topic at the time of writing with searches on the websites of most major newspapers failing to return results on the issue.

The New York Times published an article on Tuesday covering the press conference given by the Pakistani military spokesman, Lt. Gen Asim Saleem Bajwa, where the confessional video of Kulbhushan Yadav was shown. Extensive coverage is given to the accusations levelled by the Pakistani authorities but only one short sentence covers the Indian response: ‘India has denied that Mr. Yadav is an intelligence operative.’ No mention is made of the doubts surrounding the validity of the confession and the Indian government’s accusations of ‘tutoring’. The article also highlighted the ‘notable timing’ of the release of the video on the same day that Pakistani investigators were given access to Pathankot, but the matter is not explored further.

On the other hand, the BBC has run the story with the headline ‘Delhi denies arrest of ‘Indian spy’ in Pakistan’. The article covers both the claims made by Pakistan authorities on Tuesday and the concern of the Indian foreign ministry that, despite requests, India has not been given consular access to an Indian national under detention in a foreign country, as is the accepted international practice.