With Global Discord at Its Peak, India Braces Itself for G20 Presidency

Given the persistent geopolitical tensions such as the India-China border standoff, the Russia-Ukraine war and its impact on food security, the chances for cooperation among the leading G20 nations look bleak. 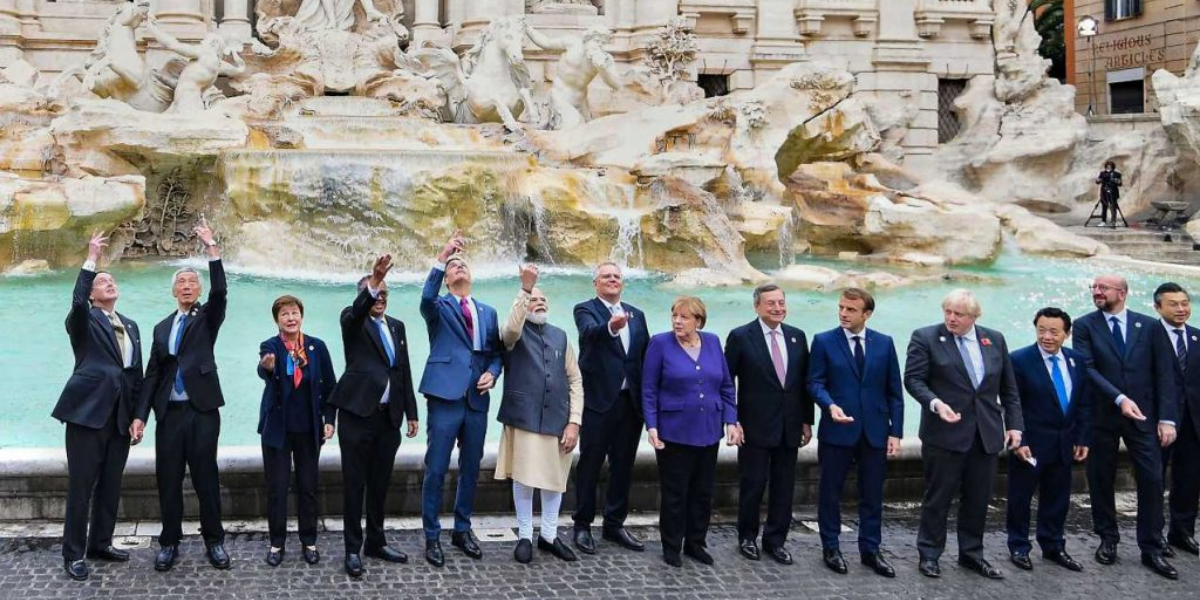 Prime Minister Narendra Modi with other G20 leaders at the Trevi Fountain, in Rome, on October 31, 2021. Photo: PTI

The Group of Twenty or G-20 has never been as starkly divided as it is now. The atmosphere at the group’s foreign ministers’ meeting in Bali on July 7-8 was very different from its Jakarta Summit held earlier in February 2022. The proceedings were heckled by Western leaders challenging the Russian foreign minister, Sergey Lavrov, on Ukraine, and the G7 group’s boycott of the welcome reception.

With the ‘premier forum for international economic cooperation’ at variance over geopolitical tensions, India will be assuming the presidency of the G20 in December.

At a time of heightened inflation which is broadening beyond food and energy prices, continuing COVID-19 pandemic-related disruptions and fears of a global recession, the widening net of Western economic sanctions has led to additional pressure on emerging economies. Representing more than 80% of the world’s gross domestic product (GDP), 75% of the global international trade and 60% of the world population, the G20 has a significant responsibility to fulfil. But an evaluation of the number of issues over which the leading economies are at odds leaves little room for euphoria and optimism.

With former NITI Aayog CEO Amitabh Kant at the helm, can India provide meaningful direction towards overcoming global crises like concentration of wealth, increasing inflation, unemployment, energy and climate policy? Or will the many geopolitical differences between the 19 other nations and the EU hamper any significant progress in the G20’s objective for sustainable development?

India’s priority should be to shape the agenda around an inclusive and equitable post-pandemic recovery. In 2020, the G20 launched the Debt Service Suspension Initiative (DSSI), ‘to support, in a structural manner, low-income countries with unsustainable debt.’ A year later this was extended and a Common Framework for Debt Treatments was adopted to deal with insolvency and protracted liquidity problems. Despite its name, the Common Framework is essentially designed to operate case-by-case.

Countries that applied for and made requests for debt relief faced delays and policy constraints. As the closest neighbour of Sri Lanka, India would be remiss if it fails to address the risks of social instability in countries with acute debt distress. With post-pandemic economic collapse becoming an increasing risk, the debt issue needs to move higher up on the political agenda of the G20. And its longstanding goals of reforming the International Monetary Fund (IMF) governance and quota system acquire greater relevance.

As the rising cost of living pushes millions of people around the world into poverty, and many emerging economies staring at debt crises, the global debate over food protectionism becomes significant. India was severely criticised by the G7 countries for the wheat ban, even though the country’s exports account for less than 1% of the world’s total wheat.

Despite its wheat ban, India has exported 1.8 million tonnes at the request of foreign governments. The G20 must address that food security is crucial for a country the size of India, and examine the high food waste index in the West.

India has a young and growing population and is poised to replace China as the most populous country in the world by 2023. While this massive and young labour pool constitutes a definite competitive advantage, for now, it is a burden given that there are insufficient jobs in the economy. With the mechanisation of formerly labour-intensive industries and the overall global downturn, the employment scenario is unlikely to improve in the near future unless major reforms are undertaken. Compared to other global problems such as climate change, ‘decent work’ (goal number 8 in the Sustainable Development Goals) is viewed primarily as a problem to be solved foremost at the national level.

As president of the G20 grouping, India should bring in a stronger focus on ‘decent work’ to ensure significant progress. G20 is an important forum which could support new and existing industries and provide youth with professional training opportunities for medium-level jobs, by means of appropriate direct investments.

The proposal for waiver on patents on diagnostics, therapeutics and vaccines for COVID-19 sought by India and South Africa, has been fiercely opposed by major G20 member countries, the US, European Union and Japan, which is home to the bulk of the research-based pharmaceutical industry. As president of the G20, India must steer the crucial debate over waivers, also because it is a nation severely affected by COVID-19 and one of the largest manufacturers of vaccines.

The G20 might also get encumbered in setting a unanimous agenda, in view of geopolitical divergences amongst members. Since the start of the Russian invasion of Ukraine, India has been pressured by Western countries, especially the US, to take an inimical stance towards Moscow. The latest instance of this imperious attitude was demonstrated when bypassing diplomatic channels. The US Consulate asked the Mumbai Port Authority not to allow Russian vessels to call at the city’s port, because of the sanctions imposed by the US against Russia. Although the Ministry of External Affairs has taken objection to the matter, as India continues to buy discounted oil and expands economic and trade linkages with Russia, there will be more instances of disagreement with the US.

Although external affairs minister S. Jaishankar and his Chinese counterpart Wang Yi met at the Bali summit, the unresolved border tensions remain the albatross that could prevent meaningful cooperation. The readout of the meeting issued by the Indian side mentioned the discussion on the unresolved border stand-off in Ladakh, but the Chinese readout doesn’t mention the border dispute. India’s crackdown on Oppo, Vivo and Xiaomi leaves little doubt that the longer the border standoff continues, the more Chinese companies will be at risk. This will have negative implications for cooperation in multilateral fora.

India’s extensive plans to hold the 2023 G20 meetings in Jammu and Kashmir and Ladakh are at risk of becoming another divisive issue. Pakistan has been lobbying China and Turkey to boycott the meetings in view of the venue, and echoing Islamabad’s objection, China has voiced its opposition to India’s plans.

Asked whether China would attend the G20 summit in J&K, foreign ministry spokesperson Zhao Lijian told a media briefing, “Whether we attend the meeting, we will look into that.”

Given these profound disagreements and persistent tensions, the chances for cooperation among the leading G20 economies look bleak. As incoming president, India should ensure that the G20 can at least provide a sense of leadership for the alleviation, if not resolution of multilateral disputes, at a time of utmost global discord.