From Teesta River Waters to Trade, Modi Visit to Bangladesh a Reminder of Pending Projects

Prime Minister Narendra Modi returned to India on Saturday night after a two-day visit to Bangladesh, which coincides with the West Bengal elections. 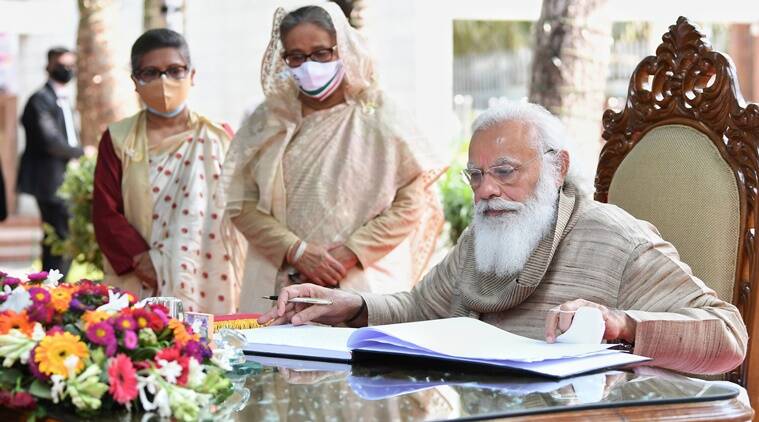 Dhaka: India said on Saturday it would make efforts to conclude the Teesta water-sharing deal, pending since 2011, and reiterated a number of bilateral goals – including the need to enhance bilateral trade by removing non-tariff barriers and quickly concluding a study on a Comprehensive Economic Partnership Agreement (CEPA). While few of the new takeaways listed in the joint statement issued after Prime Minister Narendra Modi’s talks with his Bangladeshi counterpart, Sheikh Hasina, had immediate relevance, Indian officials said they reflected a desire to impart new energy and speed into the relationship.

Briefing reporters on Modi’s two-day visit to Bangladesh, foreign secretary Harsh Vardhan Shringla said the Teesta issue was discussed during the talks between the two leaders.

‘Prime Minister Modi reiterated India’s sincere and continued efforts to conclude this agreement in consultation with relevant stakeholders,’ he said in response to a question.

The Indian side also requested the early finalisation of the draft of the interim agreement for sharing of the Feni river’s waters, pending with Bangladesh, which had been agreed upon by both sides in 2011.

‘River water cooperation is something that will continue…we have extensive cooperation,’ Shringla said.

During the meeting, Prime Minister Hasina emphasised that alleviating the sufferings and saving the livelihoods of millions of people dependent on the Teesta river basin made it necessary for Bangladesh receives its fair share of the Teesta’s waters, the draft agreement of which has already been agreed upon by both governments in January 2011, according to a joint statement issued after the talks.

‘The two leaders directed their respective ministries of water resources to work towards an early conclusion of the framework of interim agreement on sharing of waters of six common rivers, namely, Manu, Muhuri, Khowai, Gumti, Dharla and Dudhkumar,’ it said.

The two countries are currently cooperating on 56 rivers that flow between them. The cooperation in the area is very diverse as the use of water for drinking, irrigation and how we can work together to control flood and pollution, Shringla said.

‘We just had a meeting of the water-resources secretaries of the two sides in New Delhi… It was an excellent meeting. We are meeting and are talking about all the important issues, including the Teesta issue,’ he added. Shringla is a former Indian high commissioner to Bangladesh.

The Teesta river originates in Sikkim, flows through the northern parts of West Bengal, before entering Bangladesh and joining the Brahmaputra river.

The flow of the river is crucial for Bangladesh from December to March, during which the country requires 50 per cent of the river’s water supply.

The Teesta deal was set to be signed during the then Prime Minister Manmohan Singh’s visit to Bangladesh in September, 2011 but was postponed at the last minute due to objections raised by West Bengal chief minister Mamata Banerjee. Banerjee had expressed strong reservations against giving Bangladesh a greater share of water from the Teesta.

The two prime ministers directed the joint technical committee, formed for the purpose, to expeditiously commence the feasibility study of the Ganges-Padma barrage and other alternative options in Bangladesh for optimum utilisation of the Ganges waters received by Bangladesh as per the Ganges Water Sharing Treaty, 1996.

Both leaders emphasised the importance of effective border management for ensuring a tranquil, stable and crime free border, the joint statement said.

Bangladesh has repeatedly complained that villagers along the border were often killed by Indian border guards.

During the talks, Hasina expressed her concerns about the ‘border incidents’ which she said increased in recent period, Karim said.

Both sides agreed that any death at the border is a matter of concern and directed the concerned border guarding forces to enhance people-oriented measures for ensuring border security and bring down such death of civilians to zero, the joint statement said.

Bangladesh has reiterated the request for 1.3 km innocent passage through the river route along with River Padma near Rajshahi District, on humanitarian grounds. The Indian side has agreed to consider the request, the joint statement said.

The Indian side requested for completion of border fencing at all pending sectors at the international border at the earliest, beginning from the Tripura (India) – Bangladesh sector. The Bangladesh side assured India it would look into the matter, the joint statement added.