“MEA’s credibility and its standing as an institution that has always upheld professionalism has been severely damaged and will be difficult to repair,” a former foreign secretary said. 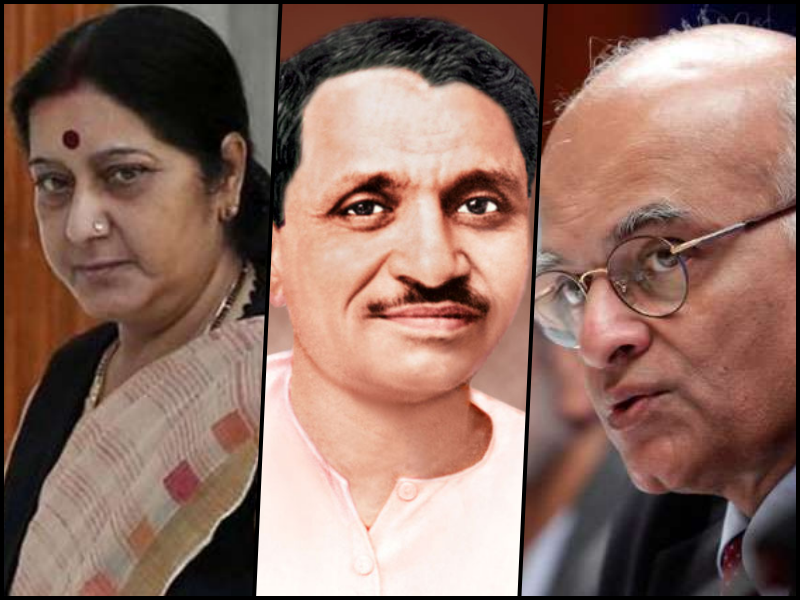 New Delhi: “Incomprehensible” is the word  former national security advisor and foreign secretary Shivshankar Menon used when asked for a reaction to the publication by the Ministry of External Affairs of an e-book on Rashtriya Swayamsevak Sangh ideologue Deendayal Upadhyaya which describes the BJP as the only political “alternative” in India and says “only India and Hindu society are spiritual”.

On September 22, the MEA uploaded a bilingual e-book on its official website which, according to a foreword by the external affairs minister Sushma Swaraj, was the product of the “hard work of MEA officials”.

The Hindi version notes in one place: “मानवता की एकता की आधार आध्यात्म होगा। आध्यात्म केवल भारत व हिंदू समाज के पास है।” This translates into asserting that only India and Hindu society are spiritual. The English version says: “Nature itself is a part of God, This is how we all are inalienably united with the Ultimate. This is the essence of Hindu thought. Bhartiya thought”.

In the profile of Upadhyaya, the last line states, “उनके द्वारा विकसित किया गया दल, “भारतीय जनता पार्टी” ही देश में राजनैतिक विकल्प बना (The party that he helped develop – the BJP – became the only political alternative in the country)”.

The Wire published an article on September 30 questioning the propriety of the foreign ministry publishing a book openly extolling one political party as the national alternative and also equating India with Hinduism.

Asked by The Wire f0r a comment on the MEA’s formulations in the e-book, Menon, who was the MEA’s top official from 2006-2009, said, “I find it incomprehensible and sad that the MEA, which should represent India, has chosen to be politically partisan like this”.

“The IFS [Indian Foreign Service] resisted previous attempts to make us ‘committed bureaucrats’ and should do so again. Indian courts have given clear judgments which contradict some of what this ‘book’ alleges,” he added.

Menon noted that “India does better when we leave politics to the politicians and keep national institutions and the civil services out of it.”

The Wire wrote to over a score of former MEA officials about the propriety of the ministry promoting the cause of the ruling party via the e-book. Most preferred not to respond, even off the record, and only two former diplomats other than Menon were willing to speak on the record.

A former foreign secretary who asked not to be named, said: “The MEA’s credibility and its standing as an institution that has always upheld professionalism has been severely damaged and will be difficult to repair.”

Nirupama Rao, who was foreign secretary from 2009 to 2011, noted, “Credibility is a precious asset: for MEA and XPD – on the global stage”. “Sticking to foreign policy and diplomacy-related issues is wise and safe and pays dividends,” she told The Wire.

On the e-book, Rao who had also been MEA’s first woman spokesperson, wondered, “This latest publication may be embraced with hosannas by the diaspora but what about a larger global audience?”

“If we want Upadhyaya to go global then disseminate his original writings through embassy libraries and the cultural centres. That should not be difficult. Organise lectures by foreign academics on his thoughts and his legacy. So many ways of doing this without seeming to propagandise through a foreign office-authored festschrift.” she added.

Former Indian ambassador to Greece, Vietnam and Japan, Aftab Seth said that the language used in the e-book to identify the ministry with the ruling party was “odd”.

He noted that this was “odd, unless the person who has written it is a member of the ruling dispensation”.

“But then it should be by-lined, without that it seems that it is the official spokesman,” added Seth, pointing out that he was familiar with the job profile of the external publicity (XP) division  as he was MEA spokesperson for “four years for four different governments under four different prime ministers.”

Seth, who had headed the XP division from 1988 to 1992, said that he was “fully aware of what the XP division does and this is most unusual, that the MEA’s XP division should speak using pronoun, such as, ‘our’ when referring to either one religion or one party.”

But Seth stated that the “use of the language by the MEA is clumsy and they should have used the language even more carefully.”

During his tenure as spokesperson, the 100th birth anniversary of Jawaharlal Nehru in 1989 had been promoted by the Congress government with a slew of special events.

“MEA was not really involved. I mean, MEA published books about India and its ethos, we made films about artists and painters and all sorts of things. But we didn’t do much – I don’t think we did any propaganda as such. If Nehru was promoted on his birthday on November 14, that was about it,” he said.

When asked if the ministry had published special publications on Nehru, he said, “No, no. I don’t remember any such books being made”.

He also said that Indian missions did not get any orders to organise special events to mark Nehru’s birth centenary. “There were no instructions issued by XP division, which was under me, that anything specific should be done,” said Seth, a member of IFS’s 1968 batch.

As per records, MEA’s conference cell organised international seminars to mark Nehru’s centenary in India. Indian missions abroad were supplied with photographs and films on Nehru for exhibitions.

Unlike Nehru, who was prime minister for 17 years after leading the freedom struggle, Upadhyaya was not a part of the movement for independence. He never held any public office, nor did he win an election.