Farm Laws: US Says Access to Internet, Peaceful Protests Are 'Hallmarks of a Thriving Democracy'

The state department also said, “In general, the United States welcomes steps that would improve the efficiency of India’s markets and attract greater private sector investment.” 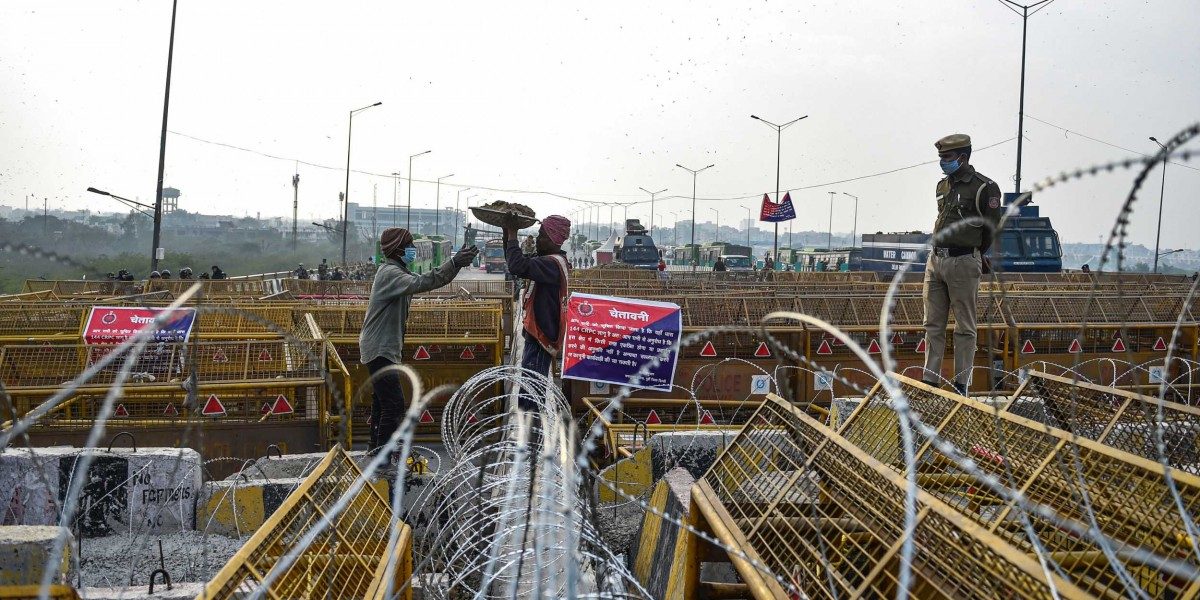 Barbed wires put across a road by Delhi Police to stop farmers from entering the national capital during their protest against the new farm laws, at Ghazipur border in New Delhi, Wednesday, Feb. 3, 2021. Photo: PTI/Ravi Choudhary

New Delhi: A day after the Indian government organised an online campaign against comments by foreign celebrities, the United States has stated that peaceful protests and unhindered access to the internet are a “hallmark of thriving democracy”.

“We recognize that peaceful protests are a hallmark of any thriving democracy, and note that the Indian Supreme Court has stated the same,” said the US state department in response to the Wall Street Journal.

Stating that it encourages all parties to resolve differences through dialogue, the state department also said, “In general, the United States welcomes steps that would improve the efficiency of India’s markets and attract greater private sector investment.”

“We recognize that unhindered access to information, including the internet, is fundamental to the freedom of expression and a hallmark of a thriving democracy,” stated the statement.

The US state department’s remarks in answer to a question from a reporter came after the Indian Ministry of External Affairs had issued a strong criticism of celebrities like US singer Rihanna and niece of the US Vice President, Meena Harris.

The US embassy spokesperson in Delhi too issued the identical statement, with an addition – “These are private citizens expressing their points of view. I don’t have comment on remarks from private citizens.”

To her 100 million followers on Twitter, Rihanna had tweeted, “why aren’t we talking about this?!” along with a link to a CNN article that only referred to the internet shutdown in border areas of the Indian capital as imposed by security forces.

After her, environmental activist Greta Thunberg and other celebrities also chimed in with their concern about the restrictions.

Later in the day, India’s Ministry of External Affairs came out with a detailed statement against the “foreign individuals and entities on the farmers’ protests”. It listed the advantages of the three farm laws and claimed that they were passed by parliament after “full debate and discussion”.

“Before rushing to comment on such matters, we would urge that the facts be ascertained, and a proper understanding of the issues at hand be undertaken. The temptation of sensationalist social media hashtags and comments, especially when resorted to by celebrities and others, is neither accurate nor responsible,” said the MEA on Wednesday.

The MEA statement also alleged that “vested interest groups” were trying to impose their agenda on the protests and were behind the violence on January 26 and the damage to Gandhi statues in the United States.

While the statement also noted that the government had held a series of talks with the protesting farmers, the MEA press note was silent on the internet blackout, which had been the CNN article’s subject.

Unusually, the MEA had used two hashtags with the statement – “IndiaTogether” and “IndiaAgainstPropaganda”.

Indian external affairs minister S. Jaishankar stated that “Motivated campaigns targeting India will never succeed”. “We have the self-confidence today to hold our own. This India will push back,” he added.

Several sportspersons and members of the Bollywood fraternity tweeted with these hashtags claiming that India’s sovereignty was threatened by the tweets of the foreign celebrities, who were interfering in internal matters.

It was unusual to have a statement from the foreign office on individuals’ comments, rather than foreign governments.

In December 2020, India had summoned the Canadian envoy after the Canadian prime minister Justin Trudeau had expressed his stance that the right to peaceful protests should be supported.

Incidentally, in a written answer to a question in Lok Sabha on Wednesday, minister of state for external affairs V. Muraleedharan asserted that “No foreign government has given support to agitation of Indian farmers against three bills passed by Indian Parliament”, adding that only a “few motivated” members of Indian diaspora had organised protests.

Regarding the Canadian PM, the MEA told parliamentarians that he had “made a comment on issues related to farmers in India”.

It was noteworthy that MEA had provided the nuance that Trudeau’s statement was not equivalent to providing “support” to the Indian protestors.

“We have taken up this matter with the Canadian authorities both in Ottawa and New Delhi and conveyed that such comments pertaining to the internal affairs of India are unwarranted, unacceptable and would damage India-Canada bilateral relations. Government of Canada has welcomed the Government of India’s commitment to ongoing dialogue with the farmers to discuss issues of concern,” added Muraleedharan.

With the US state department raising similar points as Trudeau on peaceful protests, the Indian response is now awaited.