The What, Why and How of 'Howdy, Modi'

Modi, a lover of the limelight, will be accompanied by a man similarly enamoured with public attention, Trump.

In 2014, Narendra Modi, then in his first year as prime minister, had addressed a packed Madison Square Garden in New York. Photo: PTI/File

New Delhi: On September 21, Prime Minister Narendra Modi will be facing a 50,000-strong crowd of Indian Americans in Texas, with US President Donald Trump by his side. It looks to be one of the largest gatherings of the Indian-origin diaspora ever to be be addressed by Modi and Trump

The Wire has parsed the implications of the joint appearance of Modi and Trump in the ‘Lone Star State’.

Modi has been a skilful spinner when it comes to turning routine meetings between prime ministers and local community members during foreign trips into political spectacles aimed at the prime time back home. This was first seen at New York’s Madison Square Garden during Modi’s first trip to the US in the first year of his NDA government.

In a similar parallel, Modi’s Houston event will take place in the first year of his second term and is likely to take the jamboree to another level – with the presence of the US President on the stage thrown in.

On Sunday, the 22nd at 10:15 AM local time there would be a large community programme in Houston. We are honoured that @POTUS @realDonaldTrump is gracing the programme with his presence. This gathering would be a new milestone in India-USA ties. #HowdyModi

This is not the first time that the US has shown special courtesy to an Indian premiere. During his first visit to the US in 1949, Nehru got a ticker-tape parade in New York. Seven years later, he was the house guest at President Dwight Eisenhower’s farm at Gettysburg. In the recent years, Barack Obama’s first state dinner was in honour of Manmohan Singh in 2009.

However, there has been seemingly no precedent of a US President attending a diaspora rally for a foreign leader on American soil. The US has also not seen a president like Trump in living memory. Therefore, with both leaders proving to be rather fond of political theatrics, their joint appearance before an expected crowd of 50,000 Indian-Americans may not be as surprising as on first look.

“…But I have a very good relationship with Prime Minister Modi.  By the way, great relationship with Pakistan and with India.  But he’s got a big crowd coming, and I guess the crowd just got a lot bigger because they just announced — he asked would I go, and I will go”

Why did Trump accept the invitation?

Ahead of the official announcement, the news about Trump being the surprise guest at the ‘Howdy Modi’ event was first reported by Seema Sirohi for The Wire. In her article, Sirohi wrote that political managers of both leaders had hatched the idea for Trump showing up at Houston. The political premise is that Trump needs to show up and woo an important electoral minority ahead of a tough re-election campaign for 2020.

The location was also vital. Lobbying with each and every section of Texas voters has become crucial amidst increasing buzz that the changing demographic could see the red state turn blue for the first time since 1976 in next year’s presidential elections.

Texas had gone for Trump in 2016, but his approval numbers since then has been the worst among states that had voted him to power.

According to a Washington Post article, latest polling numbers show that less than half – 45% – of Texans approve of Trump.

Amidst this underlying shift, Texan politicos have been apparently noticing that there was a noticeable increasing in the section of ethnic minority that could be brought into the fold and mined for financial contributions. 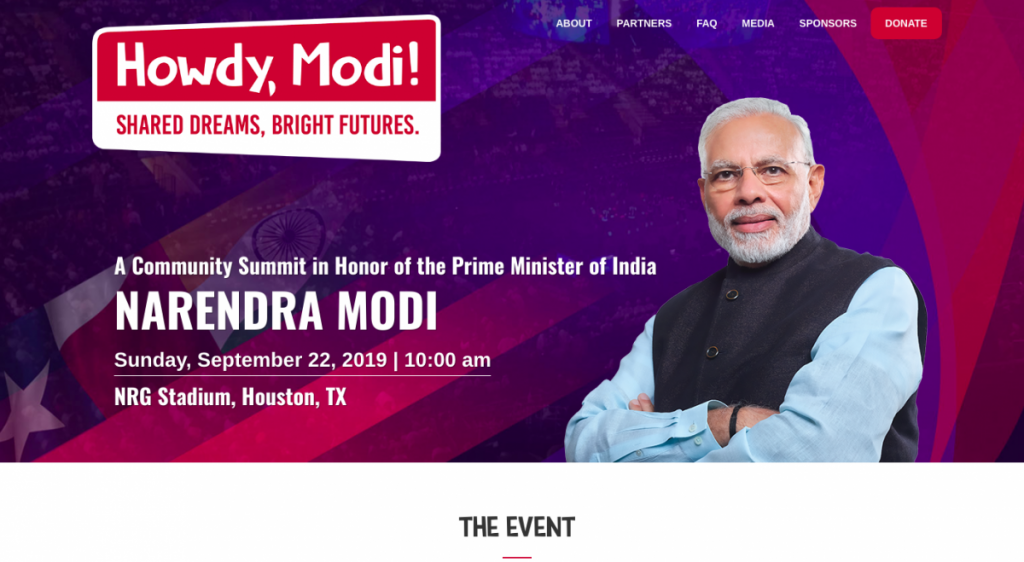 The official website of the ‘Howdy, Modi’ event. Photo: howdymodi.org

In March 2018, Republican Governor Greg Abbott admitted to a Texan newspaper that his nine-day visit on a trade mission to India was not just about commerce. “The Indian community in Texas is more Republican than the Republican Party in Texas,” Abott was quoted as having said by Dallas News.

Abbott’s statement was largely hyperbole, since the Indian American community continues to be largely Democratic. According to exit polls conducted by the Asian American Legal Defense and Education Fund, 84% of Indian origin voters had chosen Hillary Clinton over Trump in 2016. This was despite Trump’s pursuit of Indian votes, which included attending a rally organised by the Republican Hindu Coalition a month before the polls. And the antipathy among Indian Americans towards Trump is apparently still going strong.

By going to Houston, Trump hopes that some of Modi’s fans would also vote for him. But it is also clear that while many in the Indian diaspora may favour BJP’s policies in India, but they remain wary of US president’s anti-immigration rhetoric.

Also read: Lawsuit Against Modi in US Court Over Kashmir Decision Unlikely to Go Far

Along with votes, the affluence of the community means that they are more vigorously courted for their large contribution to campaign funds. As per the Los Angeles Times, Indian Americans have already contributed $3 million for 2020 presidential campaigns. While Kamla Harris has got the maximum among Democrats at $387,800, President Trump has received around $1 million. However, the differential could be due to the larger cheques allowed for the re-election bid, while democratic candidates are limited when it comes to donations by the $2800 mark.

Has India proposed an additional sweetener for Trump’s presence?

Trump, of course, is a self-described “greatest dealmaker” for US. But, his record has been spotty lately. There are no signs that China would respond positively to Trump’s negotiating tactics. In fact, he has recently indicated that there may not be a deal before the 2020 elections.

The New York Times reported on September 17 that these ‘mini deals’ with India and Japan are aimed at “helping Mr. Trump overcome concerns about his trade approach before the 2020 election and prove to voters that he is delivering on a key promise to negotiate bilateral trade deals in America’s favour”.

Therefore, a trade agreement with India – however limited – would give Trump bragging rights and breathing space over New Delhi after months of tough rhetoric from the office of the US Trade Representative.

According to some sources, India would consider cutting down on duties on imported Harley Davidson motorcycles. “Ultimately, he should be able to write his early morning tweet of having snagged the deal,” said a senior Indian official.

When Trump had started to make noises about the deficit in trade volume, India had repeatedly pointed to rising oil imports, which now lie at an approximate $4 billion. Therefore, during the Houston sojourn, Modi will also be attending a roundtable with chief executive officers of top oil and gas companies, with an eye to make some investments in the US. The Indian foreign secretary Vijay Gokhale said recently that the meeting had been organised “not only to show that we are an important market but also to discuss investment and other possible opportunities in the economic area”.

If Trump is attending ‘Howdy, Modi’ to garner electoral brownie points, doesn’t he risk giving a partisan hue to ties with India?

While Trump hopes to attracts votes and funds from the Indian diaspora, the bipartisan consensus in Washington to improve ties with India is not likely to be dented, even though his presence may have led to some feathers of Democrat Congressmen being ruffled.

Senior Indian officials have, in fact, been repeatedly stressing that there would be presence of Congressional representatives from both parties to highlight the bipartisan nature of the event.

However, several Democratic leaders have dropped out citing scheduling conflicts, like House Speaker Nancy Pelosi and Brad Sherman. Similarly, presidential candidate Tulsi Gabbard, who received the second-highest amount of contributions amongst democratic candidates in the primary, will also be a no-show. While Gabbard has claimed that her decision was to do with her campaign plans, it is also true that appearing on the same dais with Trump in the midst of a bruising primary campaign, may not be helpful.

Stand with Tulsi at this critical moment when the powerful, corrupt, political elite are trying to silence the voice of one of the most courageous leaders our country has known in decades. Donate now –> https://t.co/DPATQN7X8h #TULSI2020

The highest ranking Democrat on stage would be House majority leader Steny Hoyer, who is likely to give a speech.

One of the reasons that the bipartisan backing for India remains strong is because the mood in Washington has hardened on China, both economically and politically.

How does Trump’s presence benefit Modi?

The Washington Post described Trump’s attendance as a “coup for Modi”. The event and Trump’s forthcoming embrace of Modi has certainly come at an opportune moment. Within India, the government has been trying to project that its steps to change Kashmir’s constitutional and continuing security clampdown has not negatively impacted its reputation or invited censure from the international community. Trump at the dais would, therefore, be doubly symbolic to New Delhi, that has launched its own counter-campaign to thwart Pakistan’s diplomatic drive.

The smiling pictures would certainly overshadow some of the recent negative reporting on the economic front in India, just as two important states, Maharashtra and Haryana, will go to polls next month.

Ultimately, the event and its outcome – in the absence of any comprehensive trade package – will largely stand for political symbolism.