The Turkish president's comments on Kashmir were made knowing full well they were contrary to India’s position. He was, in fact, brandishing his Islamist credentials. 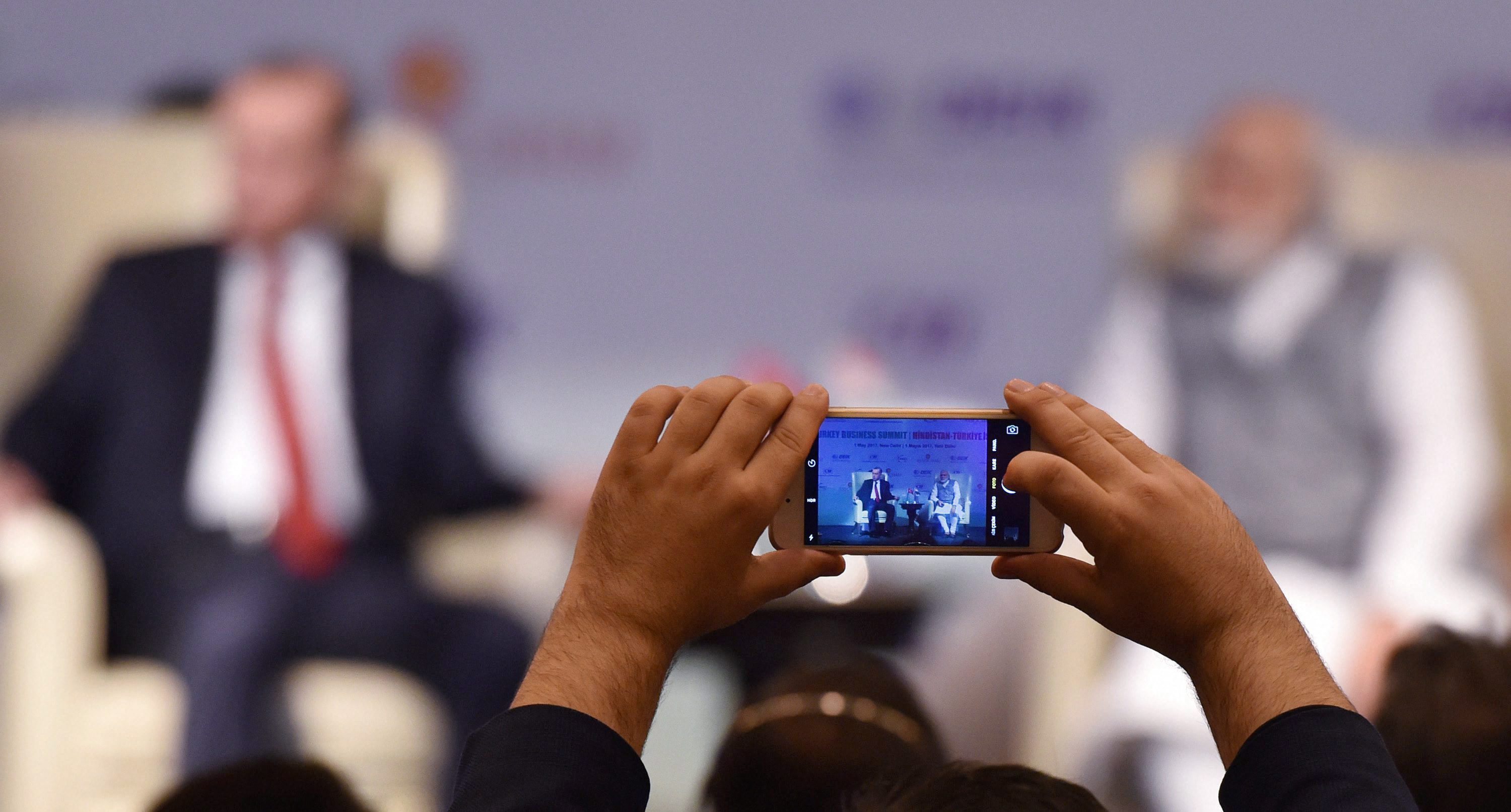 Turkey’s president, Recip Tayyip Erdogan, came to Delhi on April 30, fresh from a victory in a national referendum that conferred sweeping powers upon a leader who was already being referred to as “sultan” and “caliph” in his country. By a narrow margin of just over 51%, the Turkish people opted for a presidential form of government, which will come into effect from November 2019. After the result, Erdogan received a congratulatory message from US President Donald Trump.

Erdogan’s associates have hailed this as a “win for democracy,” a move that will make Turkey’s political system more resilient by putting an end to weak coalition governments. A Turkish scholar said that with this victory, Erdogan also wants “to build stronger relationships with strong global actors such as India, setting the tone of its new foreign policy”. After India, Erdogan will be going to China, Russia and the US.

Erdogan’s opponents see things differently, however, viewing the “victory” as a triumph for authoritarian rule. Echoing these concerns, The Guardian in an editorial said that “Turkey has now entered a daunting and unpredictable new chapter in its political history … If implemented, these reforms will all but recreate Turkey as a sultanate, almost a century after Ataturk founded the republic on the ruins of the Ottoman empire.”

Erdogan has been at the helm of Turkish politics since 2003, when his party won two-thirds of the seats in parliament – the first time an Islamist party got to form the government in the country.  He then led his party to three electoral victories, before becoming president in 2014.

In his early years as prime minister, he consolidated the democratic order in the country by thoroughly de-fanging the armed forces, an achievement that was tested at the time of the attempted coup in July 2016, which was swiftly crushed with popular and police support. He also reached out strongly to the country’s disgruntled Kurdish community – and for a time there was the promise of a historic accommodation with the Kurds and their integration into the national mainstream.

In the first decade of this century, Erdogan projected himself as a “moderate” Islamist leader – this at a time when authoritarian rulers and radical Islam appeared to define the global Muslim firmament. He welcomed the first Arab uprisings in 2011, backed the advent of the Muslim Brotherhood government in Egypt and even put Turkey forward as a model for reform in the Arab world.

Erdogan’s foreign policy, shaped then by the scholar-diplomat Ahmet Davutoglu, later Turkey’s foreign minister and prime minister, was based on the principle of “no problems” with neighbours. It consisted of an accommodative approach to all neighbouring countries, including Greece, Syria, Iran, Iraq, Saudi Arabia, Azerbaijan, Georgia and even historic enemy Armenia, so that Turkey was seen as playing down its obsession with EU membership in favour of promoting ties with its historic partners in the Caucasus and West Asia.

The politics of error

All of this is now a distant dream. Perhaps the Arab Spring, which was once viewed as a Turkish opportunity to showcase its Islamic and democratic credentials, was also the beginning of Erdogan’s descent into error.

In a major policy reversal, Erdogan became a player in the Syrian cauldron, aligning Turkey with Qatar to promote regime change in Damascus by backing Salafi militia efforts to bring an Islamist government to power. To bolster these militants, Erdogan opened a “jihadi super-highway” from Turkey into Syria, which allowed thousands of radicals to flock to the Syrian war zones. In time, these jihadis became the rank and file of the ISIS.

But things became even worse for Erdogan: as the Bashar al-Assad regime weakened in Damascus, the Syrian Kurds pushed for their own ‘Rojava’, a western homeland, at the Turkey-Syrian border, threatening to set up an autonomous zone that would also be a sanctuary for the Kurds fleeing Turkey. Erdogan’s outreach to the Kurds at home collapsed in the face of this development; in 2015, he abandoned his accommodative approach and opened the gates to repression and retaliatory Kurdish violence.

In this background, now reversing his “no-problems” neighbourhood policy, Erdogan sent Turkish troops into Syria, supposedly to fight the ISIS (largely bolstered by his own earlier actions), but, in reality, to break the contiguity of the Syrian Kurdish territory and confine the Kurds to east of the Euphrates. Turkish troops are also stationed outside the Iraqi town of Mosul, to stop the Kurds from taking the town by ensuring the demographic domination of the local Turkoman population. These military interventions have revived memories of oppressive Ottoman rule in the region. 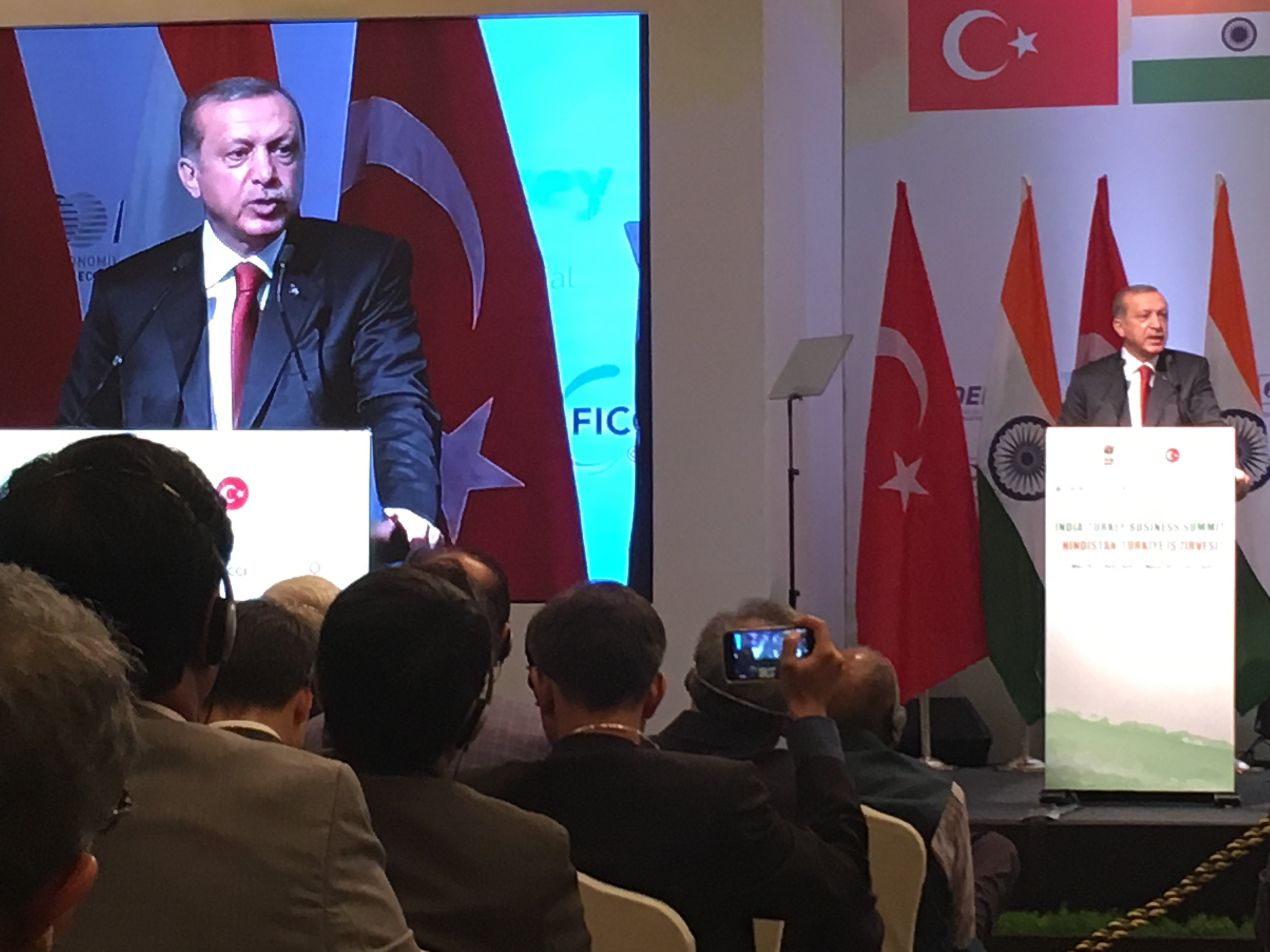 For some time now, some sections of the international media have seen Erdogan and Prime Minister Narendra Modi as kindred spirits. Both had their baptism in religion-based politics, Modi in the RSS and Erdogan in the now-banned Islamist party, Refah Partisi or Welfare Party.

Both have promoted their commitment to multi-faceted national development, while assiduously projecting a “strongman” image; Erdogan won great acclaim across West Asia for his tough remarks to Israeli President Shimon Peres at a public platform at Davos in 2009, when he severely castigated Israel for its harsh assault on Gaza. Thus, on the eve of Erdogan’s arrival in India, the German news agency Deutsche Welle described the visit with the headline “a Muslim Nationalist meets a Hindu Nationalist”.

The Erdogan who visited Delhi in 2017 was a shadow of the leader who had come to India in 2008. Then, he was at the peak of his domestic and international stature and was appropriately welcomed as a statesman, a man of peace, an exemplar of the compatibility of Islam and democracy in a modern political order.

On the eve of his departure for India, Erdogan in a TV interview to an Indian channel, WION, firmly rejected any parallels between the Kurdish and Kashmir issues, pointing out that the Kurdish issue was a domestic matter, while the Kashmir issue involved the claims of two sovereign states. Erdogan then added, “We shouldn’t allow more casualties to occur (in Jammu & Kashmir). And by strengthening multilateral dialogues, we can be involved. And through the multilateral dialogues, we have to seek out for ways to settle this question once and for all, which will provide benefits to both of the countries.”

This reference to “multilateral dialogues” was read in India as proposing a multi-party involvement in the discussion process. This has been a red rag for India since its bitter experience at the UN Security Council in 1948, after which India has insisted on seeing the Kashmir issue as a bilateral matter between itself and Pakistan.

Erdogan then compounded his insensitivity towards the Indian position with the following remarks: “My dear friend, Mr Prime Minister Nawaz Sharif of Pakistan is an individual with whom I have been discussing these issues at length and I know that he is a man of good intention. … So, if we keep the dialogue channels open, we can settle this question once and for all.”

As expected, the references to “multilateral dialogues” and “My dear friend … Nawaz Sharif” became the anchors on which the Indian media founded the rest of the president’s visit, highlighting Turkey’s deep and historic ties with Pakistan, and seeing a difference in Erdogan’s approach to the two countries on every issue on which he made a comment.

Thus, while Erdogan asserted that he stood in full solidarity with India against all forms of terrorism, Indian commentators noted that, while he specifically condemned the Naxalite attack on CRPF jawans at Sukma, he made no reference to cross-border terror attacks on India from Pakistan, nor did he condemn the beheading of two Indian soldiers at the border that took place during his visit.

It was left to Modi to bring out Pakistan’s role in cross-border terror by pointing out, “The nations of the world … need to work as one to disrupt the terrorist networks and their financing and put a stop to [the] cross-border movement of terrorists. They also need to stand and act against those that conceive and create, support and sustain, shelter and spread these instruments and ideologies of violence.”

Again, reflecting Erdogan’s own view of the domestic nature of the Kurdish question, India’s official spokesman said it had been clearly conveyed to Erdogan “that Kashmir is an integral part of India.” He added that Erdogan had been told that “in Kashmir, we have been victims of cross-border and state-sponsored terrorism.”

The bilateral vibes were much better on economic issues. Erdogan was accompanied by a 150-strong business delegation and spent the first day of his visit at a meeting of the India-Turkey Business Summit. The two countries have agreed to increase bilateral trade from the present $6.5 billion to $10 billion by 2020. Both sides also agreed that cooperation in the fields of IT, pharmaceuticals, health and tourism is beneficial to the growth of bilateral trade between the two nations. The Turkish side said that it had the ability to meet India’s infrastructure requirements and the development of smart cities.

Sections of the Indian media have been scathing in their response to what they saw as the president’s insensitivities: one writer referred to Erdogan as “a repressive, paranoid autocrat [who] has cemented his position through a dubious referendum”.

The Hindustan Times was particularly incensed by the president’s references to Kashmir; in an editorial, the paper spoke of Erdogan as “a leader so frightened of his shadow that he has imprisoned tens of thousands of his own countrymen, including more journalists than any totalitarian dictatorship.” It then firmly advised him “to mind his manners — and his business — on matters relating to India and Pakistan.”

Erdogan made his Kashmir-related remarks with the full knowledge that they were contrary to India’s long-standing position. He was clearly burnishing his Islamist credentials in this regard, explaining later in his address at Jamia Millia Islamia that countries do not agree with each other on every issue. His main agenda in India was economic, getting fulsome support from the Indian corporate sector. His core political ties lie with China, Russia and the Central Asian Republics, and these remain solid.

Erdogan is no longer the moderate Islamist politician, statesman and hero of West Asia that he was just a few years ago. Since 2011, he has been asserting his authoritarianism domestically and his Islamist identity regionally, so that he is now identified at home and abroad with intolerance and repression. His domestic agenda of reconciliation with the Kurds lies in tatters, even as Turkey itself has been targeted by terrorists from the ISIS. Now under siege in Mosul and Raqqa, the terrorist group is now turning its wrath upon its tormentors on their home ground.

However, Erdogan is not likely to be daunted by Western critics of his rule: he frequently lambasts the latter for their ignorance, prejudice and Islamophobia. He is comforted by the fact that he is a member of an exclusive club of authoritarian rulers, made up of the rulers of China, Russia, the US and India, among others, who value him for his tough, no-nonsense approach to domestic and regional challenges, even as bilateral irritants, at least in the case of India, persist.

Erdogan is not the exception; in the “age of anger”, he is in the mainstream of world politics.

Talmiz Ahmad, a former diplomat who has represented India in West Asia, is a Consulting Editor at The Wire.