Though he took no names, the home minister's remarks were directly aimed at Pakistan prime minister Nawaz Sharif 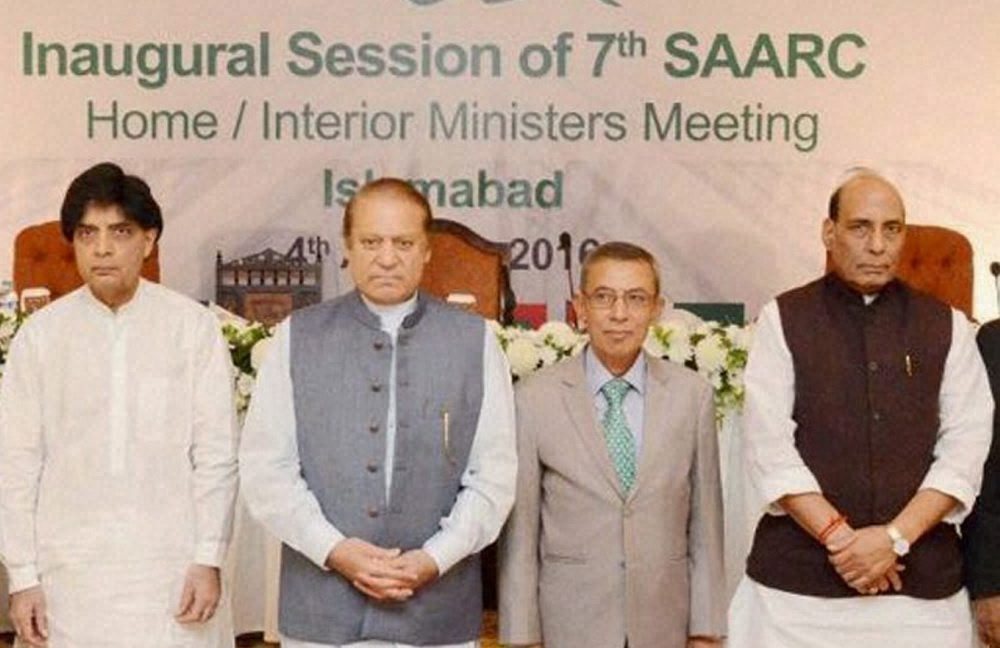 New Delhi: In a  short but strained visit to Pakistan, Indian home minister Rajnath Singh told the SAARC interior ministers conference in Islamabad on Thursday that terrorists should never be eulogised as martyrs.

Though he took no names, Singh’s remarks were directly aimed at Pakistan prime minister Nawaz Sharif, who had described the slain Hizbul commander Burhan Wani as a martyr. The killing of Wani by Indian security forces last month has led to an upsurge in violence and street protests in the Kashmir Valley in which over 50 people dead.

In his speech, Rajnath Singh said that Saarc countries must ensure “that terrorism is not glorified and is not patronised by any state”.

“One country’s terrorist cannot be a martyr or freedom fighter for anyone. I also speak for the entire humanity – not just for India or other SAARC members – in urging that in no circumstances should terrorists be eulogised as martyrs,” he said.

He repeated this theme twice in his speech, stating that if terrorism had to be eliminated, “we will have to genuinely believe that attempts to distinguish between ‘good’ and ‘bad’ terrorists are misleading”.

“No type of terrorism or support to it can be justified on any grounds whatsoever. Immediate and effective action is required against all those who support or encourage international terrorism in any way, whether they are state actors or non-state. Only then justice will be ensured for the victims of terrorist attacks such as in Mumbai and Pathankot. We must have the approach of ‘zero tolerance’ against any type of terrorism,” he added.

Reiterating India’s ‘name and shame’ policy on terror, Singh said, “Those who provide support, encouragement, sanctuary, safe haven or any assistance to terrorism or terrorists must be isolated.”

“Strongest possible steps need to be taken not only against terrorists and terrorist organisations but also those individuals, institutions, organisations or nations that support them. Only this will ensure that the forces engaged in promoting the heinous crime of terrorism against humanity are effectively countered,” he added.

Singh said that South Asia was seeing “mounting threats and incidents that endanger the region’s peace and stability”.

“Terrorism remains the biggest challenge and threat to our peace. South Asia continues to be deeply affected by this malady, as witnessed most recently in cowardly terrorist attacks in Pathankot, Dhaka, Kabul and other places”.

Stating that “strong condemnation” was “not enough”, Singh asserted, “We must harden our resolve to eradicate this menace and also take serious steps to this end”.

Earlier, in his address to the meeting, Pakistani interior minister Chaudhary Nisar Ali Khan trained his guns at India with a diametrically opposite reading, saying that there was a difference between a freedom struggle and terrorism.

According to the Pakistani newspaper Dawn, the Pakistani interior minister said that “using torture against innocent children and violence against civilians qualifies as terrorism”.

“We have seen brutal force being used against unarmed civilians. It is important to respect the fundamental human rights of the people and not suppress [a] freedom struggle in the name of fight against terrorism,” Khan said, as quoted by Express Tribune.

He asserted that Pakistan had suffered heavy losses in the fight against terrorism and that the country condemned every single incident of terror which claimed innocent lives.

“Mumbai, Dhaka and other incidents like Pathankot which are highly condemnable does not mean that dozens and scores and in fact hundreds of terror incidents taking place almost on a daily basis in Pakistan are any less condemnable,” Khan.

In his opening remarks, Nawaz Sharif cited the example of Pakistan’s military operation in the tribal areas to illustrate his country’s resolve to fight terrorism.

“Pakistan on national grounds has been successful in curbing terrorism by implementing the National Action Plan and carrying out the operation Zarb-i-Azb.. The success proves that Pakistan is committed towards wiping out terrorism from its territory,” he added.

No ‘media blackout’ of Rajnath

The tensions between the two south Asian neighbours were evident in Rajnath Singh’s visit which did not have a single bilateral meeting with the hosts.

According to PTI, Rajnath Singh and Chaudhary Nisar Ali Khan did not even have a formal handshake when the latter was standing at the gate of the Serena hotel to greet the SAARC ministers.

After the SAARC meeting, the Pakistani minister was supposed to host a lunch for the visitors. But, when he left the venue despite being the host, Singh also skipped the official lunch. Rajnath Singh did meet with Sharif on Thursday morning, but as part of the group of SAARC ministers. Officials told PTI it was “only a courtesy call“.

Earlier in the day, some media outlets claimed that there was a “blackout” by Singh’s speech, with no media allowed to record the proceedings.

Even as Pakistani journalists pointed out that only the speech of Prime Minster Sharif was carried live, official sources also confirmed that Indian media reports about “blackout” were “misleading”.

“It is the standard Saarc practice that the opening statement by the host country is public and open to the media while the rest of the proceedings are in camera, which allows for a full and frank discussion of issues,” sources said.

Singh returned to Delhi by evening and immediately met with Prime Minister Narendra Modi. He is scheduled to make a statement about his visit in Parliament on Friday.

Modi has committed to visit Pakistan to attend the SAARC summit in November.