While inviting the Dalai Lama to any part of India is well within the country's rights, looking at it from the China's perspective also serves a purpose.

Tibet's exiled spiritual leader the Dalai Lama gestures as he arrives to give a public religious lecture to the faithful in Strasbourg, France, September 17, 2016. Credit: Reuters/Vincent Kessler 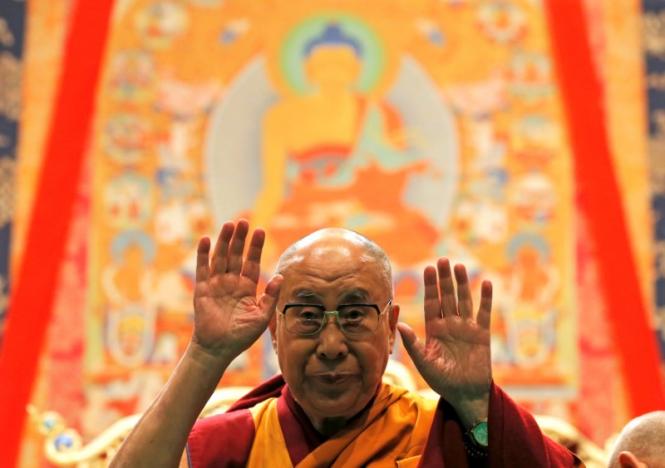 Tibet’s exiled spiritual leader the Dalai Lama gestures as he arrives to give a public religious lecture to the faithful in Strasbourg, France, September 17, 2016. Credit: Reuters/Vincent Kessler

The recent visit of the Dalai Lama to Arunachal Pradesh has brought forth a torrent of protests from Beijing, becoming shriller by the day. A Chinese foreign ministry spokeswomen, Hua Chunying, went so far as to say that Dalai Lama’s visit had “severely damaged China’s interests and China-India relations” and further that “China expresses firm opposition to this visit and will lodge stern representations to the Indian side”. The Chinese press was no less virulent, with the Global Times even saying that “New Delhi may have underestimated Beijing’s determination to safeguard core interests…[emphasis added]”. The question is why is Beijing so deeply riled and its reaction so virulent and why has it taken such a hard line position?

There is no doubt that Arunachal Pradesh is an integral part of the Indian Union and as such the Dalai Lama is free to visit any apart of India, particularly if his mission is concerned with religious affairs. No government in India in the past has ever relented on this aspect, although sometimes discretion has been exercised. It would, however, be worthwhile also to examine the issue from China’s perspective, so as gain an understanding of what can be expected from India’s northern neighbour, with whom we share a long and an un-demarcated Line of Actual Control (LAC).

It is not the first time that the Chinese have expressed their ire at Dalai Lama’s visit to Arunachal Pradesh and particularly to Tawang. This is Dalai Lama’s seventh visit. In the past, Chinese protests have died down once the visit was over and things have returned to normal. The sensitivity of the Chinese to this territory and happenings there is also not of recent origin. As far back as September 8, 1959, then Prime Minister Zhou Enlai wrote to Jawaharlal Nehru that “this piece of territory corresponds in size to Chekiang province of China and is as big as 90,000 square kilometres. Mr. Prime Minister, how could China agree to accept under coercion such an illegal line that would have it relinquish its rights and disgrace itself by selling out its territory – and such a large piece at that?” If Mao and Zhou in 1959, at the height of their power, could not contemplate abandoning claims to the North-East Frontier Agency (as it was then known) in favour of India unilaterally, it becomes exceedingly difficult for the present Chinese rulers to act otherwise. But much has happened since then and circumstances change, as do policies.

The present rulers of China base their acceptability and legitimacy to rule on the promise of rejuvenating China, both economically and politically, and by stressing that never again would the Chinese people have to face a century of humiliation as they did in the past. The century of humiliation is the period commonly referred to from 1840 to 1949, when the People’s Republic was founded. The key point being that China is now politically united under a strong government; in economic terms it is the second largest economy in the world. It aspires to a status of equality with the US and to be recognised along with the US as the two great powers of the day. Recently Fu Ying, the chairperson of the Foreign Affairs Committee of the National People’s Congress, speaking in the US, had this to say about China’s present attitude on territorial disputes.

“China stumbled into the 20th Century with its capital under occupation of Imperialist armies and for over a century China suffered the humiliation of repeated foreign aggression and bullying. That is why the Chinese people are very sensitive about anything that is related to the loss of territory and would never allow such recurrence even if it is an inch of land [emphasis added]. This is something that the outside world needs to keep in mind when trying to understand Chinese behaviour.”

The present Chinese leadership under President Xi Jinping faces multiple domestic challenges at home, as well as an uncertain US attitude on its eastern seaboard. Domestic challenges range from a slowing economy, an ageing population, wide income disparities and environmental degradation. The Chinese are unsure on whether US President Donald Trump might push them towards a trade war, particularly since he refuses to back down on alleged Chinese currency manipulation and unfair trade practices. The Chinese leadership is also heading towards the 19th Party Congress later this autumn, where the leadership for the next five years is nominated/selected. Although Xi’s leadership is by no means under challenge, yet he cannot have his way in the run up to the party congress unless he is seen to be a “strong” leader.

Also read: The Chinese Response Isn’t the Only Reason the Dalai Lama’s Visit to Tawang Is Significant

Thus, when the Chinese Ministry of Foreign Affairs takes a stern position and its protests are rather virulent in tone, these are not only meant for India to contemplate, but are also designed to show the Chinese government’s domestic audience on how “tough” its stand has been on the issue of Chinese territorial integrity. The Chinese see the visit of Dalai Lama to Arunachal Pradesh, and particularly Tawang, as a challenge to their territorial integrity. It is for this reason that the Dalai Lama is dubbed as a “splitist” – they know that his visit even for religious purposes has political overtones that resonates amongst the people of the sub-Himalayan region. The Chinese leadership cannot afford to be seen as “weak” on a matter considered by them to be a core issue. Strategically, it makes no sense for the Chinese to open yet another front on its south-western borders at this stage, when it is faced with far more pressing issues on the South China Sea and on the issue of Taiwan. But there are limits to Chinese patience. We have to keep in mind that China’s economy is five times larger than India’s and its military expenditure three times as large. China is capable of initiating action in all five formats: land, sea, air, space and cyber.

It is well within our sovereign rights to invite the Dalai Lama to visit any part of India, including Arunachal Pradesh. What we should be careful about is not to give unnecessary provocations to the Chinese while asserting our rights. Pique over the Chinese attitude to Indian membership of the NSG or Masood Azar is much better expressed in other ways. It is in our strategic interest to see that the Sino-Indian border remains peaceful, as it has over the last several decades.

Ranjit S. Kalha is a former secretary, Ministry of External Affairs, and a member of the National Human Rights Commission.