COVID-19: Repatriation of 'Distressed' Indian Nationals Begins as Flights Take Off From UAE

Two flights from the Gulf, with around 350 people, will herald the start of the 'Vande Bharat' repatriation operation.

New Delhi: The arrival of two flights from the Gulf, with around 350 people, will herald the start of the ‘Vande Bharat’ repatriation operation of Indian nationals from Thursday night, which the Indian government estimates will bring in over 14,000 people in the first week.

Following the closure of international and domestic passenger flights in late March, thousands of Indian nationals were stranded abroad and could not return home.

The Indian missions in the Gulf and other countries started to issue forms last week to gather information on the possible numbers of Indians who need to go back on an urgent basis. More than 3 lakh Indians from the Gulf countries alone had expressed interest to be accommodated on these on-payment flights.

In the first phase, around 1.9 lakh people will be brought back, out of which a majority will be from the Gulf countries. During the first week, 64 flights will be made, as well as the deployment of two naval ships.

INS Jalashwa reached the Maldivian capital and is scheduled to leave on Friday for Kochi with around 700 persons.

However, the first repatriation trip was flagged off as scheduled from the UAE, where Indians are the largest expatriate group.

After the announcement of the start of the flights on Monday, the Indian missions had to work fast to get the passenger lists for the first flights finalised quickly.

Also Read: From May 7 Onwards, India to Bring Back ‘Distressed’ Nationals Stranded Abroad

The lists were made on the basis of the “compelling grounds” listed by the home ministry – workers waiting for deportation, laid off from jobs, short term visa holders facing expiring in validity, medical emergencies, pregnant women, elderly, death of family members in India and students.

According to Indian officials, all the shortlisted candidates were first contacted through e-mail. If no confirmation was received, then they were contacted through phone. Air India Express was the operator for both the flights – Abu Dhabi-Kochi and Dubai-Kozhikode – on which a ticket was priced at Rs 15,000.

The first flight would leave around 4:15 pm (local time) from Abu Dhabi to Kochi, followed by Dubai to Kozhikode after a couple of hours. They will both reach Kerala late on Thursday night. Both flights will be operated by Air India Express, with a seat price of Rs 15,000.

“We were surprised to have several people say that they can’t go on the flight. None of them said that the ticket rates were high. It is just that they were also surprised the flights would take place so quickly and they were saying that they needed more time to prepare for departure,” said an Indian official.

However, he added that the flights were fully packed.

As is the norm, there were several recommendations from politicians and influential persons for accommodating certain people. “There are several phone calls and emails, but we are only following the rules. Most of the recommendations were about pregnant women,” he said.

The capacity of the planes is 186 persons, but nine seats at the back are being kept deliberately empty. “If anybody feels unwell or shows any symptoms during the flight, they can be isolated separately”.

All passengers had been asked to arrive at the airport four hours before the scheduled time. They underwent thermal screening before boarding and only asymptomatic travellers were allowed on the flight.

Unlike other countries, the UAE is also undertaking a type of rapid antibody tests on the passengers leaving its territory. Airports in the UAE are currently closed to all passenger traffic, but cargo flights continue to operate.

All the results of the rapid antibody tests were negative for COVID-19 and passengers were given the green light to start boarding.

The special flight IX452 left after a short delay at Abu Dhabi airport, but it was airborne with 177 passenger and four infants, marking the start of the repatriation process.

Within the hour, the second aircraft from Dubai to Kozhikode also took flight.

Air India Express Flight left for Kozhikode with 177 passengers on boardwith last passenger Ajith was added to attend final rites of her mother after one passenger dropped out due to immigration issue. A big satisfaction to serve all. @MEAIndia @IndembAbuDhabi @MOS_MEA @MoCA_GoI pic.twitter.com/NS1N8hZiDG

While all the passengers passed the screening and tests, one person had to be replaced, as he was stopped at immigration over non-payment of fines.

All the seats were stocked with masks, sanitizer, water bottle and a snack box before boarding so that the aircraft crew and the passengers have minimal contact. The crew, who have all tested negative for COVID-19, will be in full PPE gear.

After their arrival in India, all passengers will be tested again and would have to undergo compulsory “institutional quarantine” for a minimum of 14 days on payment basis, as per the home ministry’s standard operating protocol released on Tuesday.

However, some state governments, which will be in charge of quarantining the returnees, have decided to be more flexible.

On Wednesday, Kerala chief minister Pinarayi Vijayan said that the mandatory quarantine period in government facilities will be reduced to seven days, followed by home quarantine for those travellers who test negative for the coronavirus infection.

Pregnant women will be allowed to go home immediately after arrival, the chief minister said. 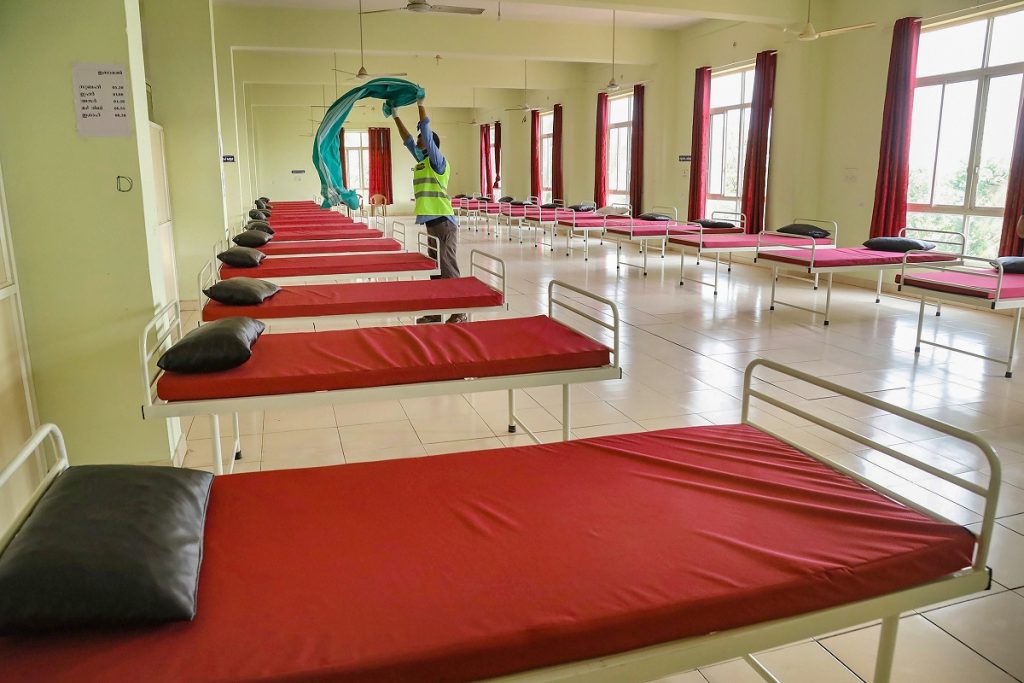 Beds inside a quarantine centre set up for NRIs who will be repatriated, near Calicut International Airport, May 6, 2020. Photo: PTI

Indian nationals can travel on empty flights to foreign destinations

The Indian government has allowed Indian nationals with long term visas to travel on the empty flights leaving the Indian cities for foreign destinations. However, the UAE is not accepting any passengers from any countries, except for those with diplomatic passports.

Air India has already announced the availability of tickets on repatriation flights to Singapore, the UK and selected cities in the US.

Note: The article was updated after the departure of the scheduled flights from UAE.