Coastal Shipping Could Propel Ties Between India and Bangladesh

With the land and maritime boundary issues settled, two major irritants in Indo-Bangladesh relations have been resolved and an enormous agenda of shared interest has been opened. 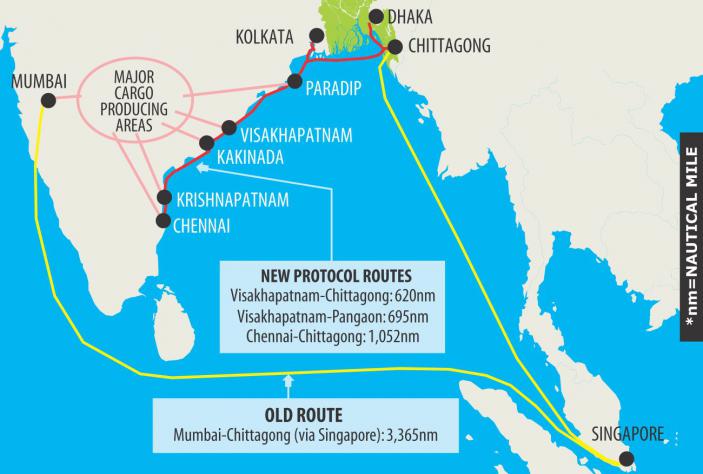 Earlier this year, Bangladesh shipping minister Shajahan Khan launched the coastal shipping service between Bangladesh and India at the New Mooring container terminal at Chittagong port. The minister said coastal shipping was being implemented within a year after the agreement was signed during Prime Minister Narendra Modi’s visit to Bangladesh in June 2015. Khan said, “The goods transported from the Indian ports to Chittagong could be delivered to the north-eastern region of India through roads”. He went on to add that road communication between Chittagong and Agartala would also be established by constructing a bridge over the Feni river in the border area. Khan also said, “…the idea of sub-regional grouping between Bangladesh, India, Nepal and Bhutan is getting shape through this coastal shipping.” He spoke of bilateral cooperation, sub-regional cooperation and better connectivity facilitating movement between two places in India through Bangladesh. On March 23, container vessel MV Harbour-1 left Chittagong port in Bangladesh and reached Krishnapatnam port on India’s east coast five days later. This historic journey has begun a new chapter of economic cooperation between the two countries.

The commencement of coastal shipping between India and Bangladesh is not an isolated development, but part of the larger blueprint of bilateral cooperation. Modi’s visit to Bangladesh last year was preceded by the historic passage of the 100th Constitution Amendment Bill in parliament, which gave effect to the 1974 Land Boundary Agreement and its 2011 protocol. The instruments of ratification were exchanged between the two governments during his visit. Discussing the significance of the agreement, India’s foreign secretary S. Jaishankar said, “what it has done is, it has really created a climate of confidence, of goodwill, of trust where a lot of other initiatives which could have happened, should have happened, can now happen….there is an enormous sense today of optimism and confidence about the entire relationship”. With both the land and maritime boundary issue settled, two major irritants in the bilateral relation were resolved and an enormous agenda of shared interest was opened. All this was built on the Framework Agreement on Cooperation for Development of 2011, agreed by the government of former Prime Minister Manmohan Singh and Bangladeshi Prime Minister Sheikh Hasina.

During Modi’s visit, 22 agreements were concluded, which included the one on coastal shipping. An elaborate 65-point joint declaration, Notun Projonmo-Nayi Disha (New Generation-New Direction), was made. According to the declaration, the two sides would work on cooperating on security related issues; a coordinated border management plan; expediting agreements on sharing of river waters; cooperating in the power sector, renewable energy and nuclear energy; boost sub-regional cooperation under the BBIN (Bangladesh, Bhutan, India , Nepal) framework; sustainable and mutually beneficial economic cooperation and narrowing the trade balance; opening new avenues and multiple modes of connectivity; issuing India’s second line of credit, worth $2 billion; maritime cooperation; people-to-people interaction, as well as coordinating in regional groupings, multilateral organisations and the UN. For India, this expanded agenda was part of its Act East policy, which sought to impact the country’s northeast region and the areas beyond it.

The confidence that these positive developments will sustain come from the fact that Modi’s visit was welcomed across the broad political spectrum in Bangladesh. The balance of trade being in India’s favour has always been an emotive issue, but it is now being approached with objectivity by both academia and politicians in that country. However, there is a consensus that tariff lines are few and the problem arises with non-tariff barriers. The setting up of a special economic zone for India to facilitate local investment in Bangladesh, which should then lead to increased exports, is seen as a positive measure to address this issue of trade gap.

The maritime agenda of cooperation

During Modi’s visit, India and Bangladesh concluded six agreements to cooperate in the maritime sphere:

Thus, with the maritime boundary being settled, both India and Bangladesh want to use the seas and rivers for developments on land. India and Bangladesh have instituted the PIWTT for operation of inland vessels on the river protocol routes between the ports of Haldia, Kolkata, Pandu, Karimganj and Silghat in India, and Narayanganj, Khulna, Mongla, Sirajganj and Ashuganj in Bangladesh. This has facilitated the movement of exim trade as well as cargo bound for India’s northeastern states. During the current financial year, India is using the Indo-Bangladesh river protocol to transport food grains via Ashuganj to Tripura. However, the quantum of cargo has not picked up because of low draft in the upper reaches of Bangladesh’s rivers and also because of non-trade barriers.

It is important to note that both the countries have agreed on the need for dredging along the inland water protocol routes with assured least available depth, with international funding, to utilise their full potential and enhance navigability of the routes.

Even before Modi’s visit, Bangladesh had allowed the transhipment of 25,000 metric tonnes of food grains to Tripura across its territory on humanitarian grounds. Bangladesh had also allowed heavy equipment shipment for the ONGC Palatana power project via its Ashuganj port. For India, positive bilateral cooperation is facilitating economic development in its northeast states. The joint working group on blue economy needs to undertake time bound projects that benefit both countries.

The growth in bilateral trade between India and Bangladesh has led to road congestion along the border, and at the land custom stations and integrated check posts. Traffic congestion at Petrapole and Benapole in Bangladesh has emerged as one of the biggest impediments to the movement of exim cargo. Due to such congestion, exporters and importers on both sides have been facing delays and undue increase in transportation costs. One measure to address this is by transporting commercial cargo through coastal shipping routes.

Coastal shipping between India and Bangladesh could not move ahead previously as it was not profitable for large vessels to operate between these ports; river sea vessels were not available in Bangladesh, and foreign-bound vessels of higher technical and manning standards were not cost effective for coastal voyages between the two countries. As a result, this meant goods had to first be sent to the Singapore, Colombo or Klang ports, and from there it would be sent in smaller vessels to the Indian and Bangladeshi ports. This could take upto 40 days, adding to both time and costs of exim trade.

In November 2015, the two countries signed the standard operating procedure to operationalise the coastal shipping agreement, the implementation of which will result in huge saving of logistics cost for exim transport and will enhance bilateral trade. The procedure contains provisions stipulating that India and Bangladesh shall render the same treatment to vessels of the other country as it would to its own national vessels used in international sea transportation. The two sides have also agreed to use river sea vessels for cross-border coastal shipping.

The coastal shipping agreement has enabled the direct regular movement of ships between India and Bangladesh in 10 days or less, as seen with the M V Harbour-1 vessel that sailed from Chittagong port to Krishnapatnam in March. Such an increase cross-border activity will lead to the development of both countries’ ports, hinterlands and shipping industries, and also facilitate the movement of goods to India’s northeast region.

However, despite these agreements fissures could also emerge if certain irritants are not addressed as a priority. Hasina requested Modi for an immediate conclusion of the interim agreement on the sharing of the waters of the river Teesta, as agreed upon by both governments in January 2011. Article 2 of the Framework Agreement on Cooperation for Development of 2011 details the commitment of the two countries to address the issue of water resources management of common rivers, including water sharing, in a holistic manner through common basin management.

During his visit, Modi said, “The rivers should nurture our [bilateral] relationship, not become a source of discord. Water sharing is above all a human issue. It affects life and livelihood on both sides of the border…I am confident that with the support of state governments in India, we can reach a fair solution on Teesta and Feni Rivers…”

During his visit, Modi handed over to Hasina a memento of INS Vikrant, which played an important role in the Bangladesh liberation war. The maritime domain has always played a critical role in bilateral cooperation. Coastal shipping has the potential to redefine the ties not just with the movement of cargo but perhaps with the movement of passengers too. Similarly, cooperation on blue economy will lead to sustainable development and the utilisation of ocean resources, benefitting both India and Bangladesh. However, all this is but part of the larger picture of bilateral cooperation. Unless differences regarding river Teesta are addressed and the special economic zone for Indian investments starts delivering, the whole edifice could weaken.

The issue-brief was originally published by the National Maritime Foundation (NMF), New Delhi. The views expressed are her own and do not reflect the position of the NMF. She can be reached at sri2003ja@yahoo.com