The dinner reception hosted by the Tibetan parliament in exile was attended by two serving ministers, Rajeev Chandrasekhar and Ramdas Athawale, along with other MPs. 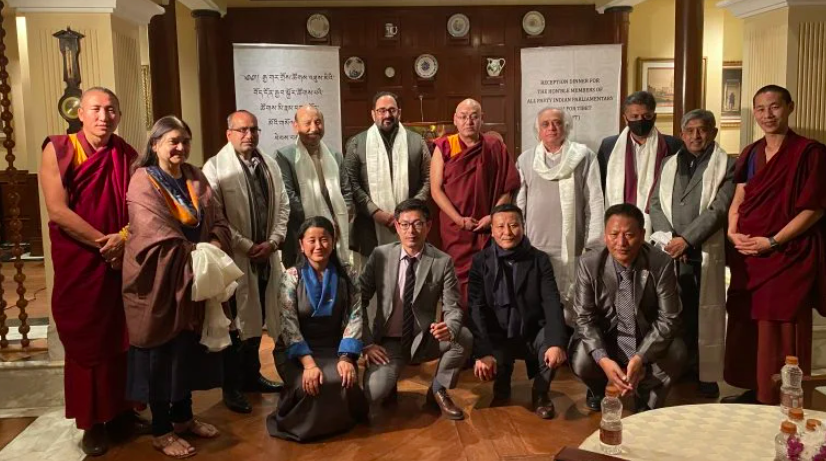 A photograph released by the Central Tibetan Administration, showing Speaker Khenpo Sonam Tenphel with members of APIPFT and Tibetan Parliamentarians on December 22, 2021.

New Delhi: Following the revival last week of an all-party group on Tibet comprising MPs, the Chinese embassy has sent a letter to the participants, expressing concern and calling on them to refrain from supporting “Tibetan independence” forces.

On December 22, Tibetan parliament-in-exile speaker Khenpo Sonam Tenphel met with the group of MPs from various parties. According to a press note from the Tibetan parliamentary secretariat, the meeting marked the “successful” revival of the All-Party Indian Parliamentary Forum for Tibet (APIPFT), which had been defunct for several years.

A week later, several of the participants received a letter signed by the Chinese embassy’s political counsellor Zhou Yongsheng.

“I have noticed that you have attended an activity held by the so-called “All-Party Indian Parliamentary Forum for Tibet” and interacted with some members of so called “Tibetan Parliament in Exile”. I would like to express our concern on that,” Zhou wrote in the letter, first reported by The Indian Express.

The Chinese diplomat noted that the Indian government recognises Tibet as a part of China and has committed not to allow Tibetans to carry out anti-China political activities. He also asserted that the “so-called ‘Tibetan Government in-exile’ is an out-and-out separatist political group”.

“China firmly opposes any anti-China separatist activities conducted by “Tibetan independence” forces in any capacity or name in any country and opposes any forms of contact by officials of any country with them,” Zhou wrote.

He added that as “a senior politician”, the MPs were expected to “understand the sensitivity of the issue and refrain from providing support to the “Tibetan independence” forces, and make contributions to China-India bilateral relations.”

According to the secretariat, the revival of the Forum was the result of the “steadfast lobbying” by a Tibetan parliamentary delegation, who had reached out to 38 Indian lawmakers.

The dinner reception hosted by the Tibetan parliament in exile was attended by two serving ministers, Minister of State for Electronics & Information Technology, Rajeev Chandrasekhar, and minister of state for social justice and empowerment, Ramdas Athawale.

“I was a member of the Indo-Tibetan Parliamentary forum under the chairmanship of (BJP veteran) Shanta Kumarji and I was invited in the capacity. I attended the dinner,” Chandrasekhar told The Indian Express.

Besides, there were nine members of parliament from both chambers and a range of political parties. Biju Janta Dal’s Rajya Sabha member Sujeet Kumar was appointed the new convener of the Forum.

Speaking to The Wire, Kumar said that he had not personally seen the Chinese embassy’s letter but had “got to know about it from the media and other MPs”.

Kumar is a founding member of the Formosa Club Indo-Pacific chapter and co-chair of the Inter-Parliamentary Alliance on China (IPAC). “I had replied to the first letter that I had received. After that, I did not bother,” he said.

He had not informed the Ministry of External Affairs about the earlier letters from the Chinese embassy but felt that the latest letter should be raised with South Block. “We had not spoken to MEA earlier, but now some of the MPs are saying that we should take it up with the ministry as it was a violation of protocol,” said Kumar.

As a newly-appointed convenor of the forum, Kumar said that there are plans to resume its activities, which had gone into dormancy in previous years.

Similar to Kumar, Congress’ Lok Sabha member from Anandpur Sahib, Manish Tiwari, confirmed that he had attended the dinner but had not received the letter as he was out of Delhi and in his constituency. “If the letter had been written by Wang Yi (Chinese foreign minister), I would have replied. Why should I demean myself by replying to the political counsellor?” he told The Wire.

Rajya Sabha MP and former Union minister Jairam Ramesh, who attended the December 22 dinner, also asserted that he has “ignored the letter”.

Ramesh added that he had nothing more to say by way of response, except to reiterate remarks made to the Tibetan MPs at the dinner. “I said that I almost never go to any evening functions or dinners of any kind but had made an exception in this case for three reasons. First, my profound fascination for the Buddha. Second, my deep respect for the Dalai Lama. Third, my grateful recognition for the role Tibetan sources have played in the rediscovery of India’s Buddhist heritage. I said I was present culturally, philosophically and spiritually,” he said.

Following the escape of the Dalai Lama, the Tibetan government-in-exile, known as the Central Tibet Administration, had been set up in Dharamshala. The largest section of the Tibetan diaspora is based in the Indian sub-continent.