It is clear that the old confidence building measures regime initiated in 1993 has broken down. Yet striving to sort out differences over where the LAC lies is the only way forward for Prime Minister Modi and President Xi. 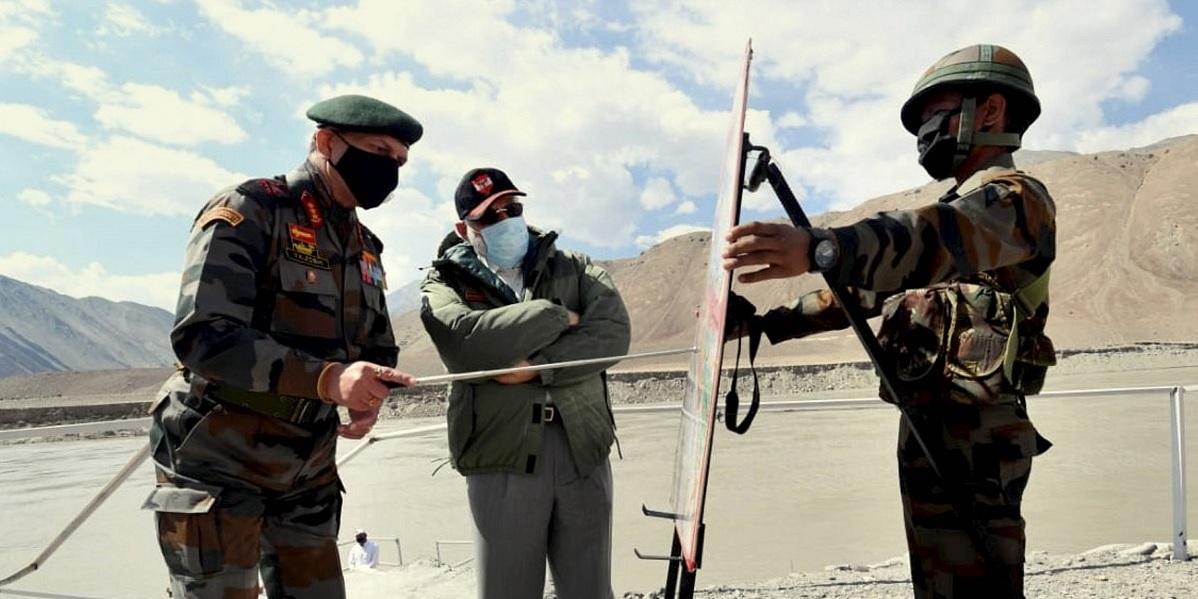 Many explanations have come forward for explaining Chinese actions in eastern Ladakh in the past two months. Equally, there have been many clarifications of Prime Minister Narendra Modi’s puzzling pronouncements on the issue. Since war can hardly be an option, could there be a congruence of sorts here – advertent or otherwise –  to work out a better working arrangement on the border? In our mind, there is just one solution that fits the bill – clarifying where the line of actual control (LAC) runs, in line with past India-China agreements, an action which Beijing has been baulking at so far.

As of now, it is clear that the old  confidence building measures (CBM) regime, initiated by the 1993 Border Peace and Tranquility Agreement (BPTA) has broken down. That regime had envisaged the two sides identifying the points along the 4,000 km LAC where there were differences of perception, and ironing them out. Thereafter, the issue of resolving the border issue itself could be left over to be dealt with later.

Instead, over time, the LAC saw increased friction in those 14-18 places where the two sides differed on where the line lay. Sometimes, the difference was that of only half or a couple of  kilometres, but it was sufficient to create crises – as it did in Depsang in 2014, Chumur in 2014 and Pangong Tso in 2017.  In May and June this year, standoffs erupted across eastern Ladakh and on June 15, matters reached a point where 20 Indian soldiers were killed in the most serious incident on the LAC in decades.

What is so important about the Aksai Chin region for China that it is willing to risk a confrontation with India? Recall, Chinese troops entered Tibet through three routes – via Szechuan and Sikang, through Chamdo where the Tibetan main force was defeated, and from Xinjiang, through Aksai Chin, over an old road. India protested the Chinese action, but the latter declared that Tibet was a domestic problem of China.

In 1950, the boundaries of the J&K state in Ladakh, whatever they may have been, were not marked on the map, leave alone the  ground. For India, this was a far-flung, uninhabited area of little economic value policed by occasional patrols in summer. As for China,  a Chinese note of December 26, 1959 says that “this area (Aksai Chin) is the only traffic artery linking Sinkiang and western Tibet.” In the second half of 1950, “it was through this area that [the] Chinese government dispatched the first units of the Chinese People’s Liberation Army to enter Tibet.” Between March 1956 to October 1957, the Chinese government built a motor road from Yecheng of Sinkinag to Gartok of Tibet, a total of 1200 kms, of which a section of 180 kms runs through this area “.

Also Read: ‘Chinese Behaviour Has Been Very Different From Anything in the Past’: Former NSA Shivshankar Menon

Looked on the map you can see that for hundreds of kilometres, it is parallel and in some cases quite proximate to the LAC. This makes the generals of the PLA nervous. And they have been pushing their troops to extend the LAC as far west as they can. 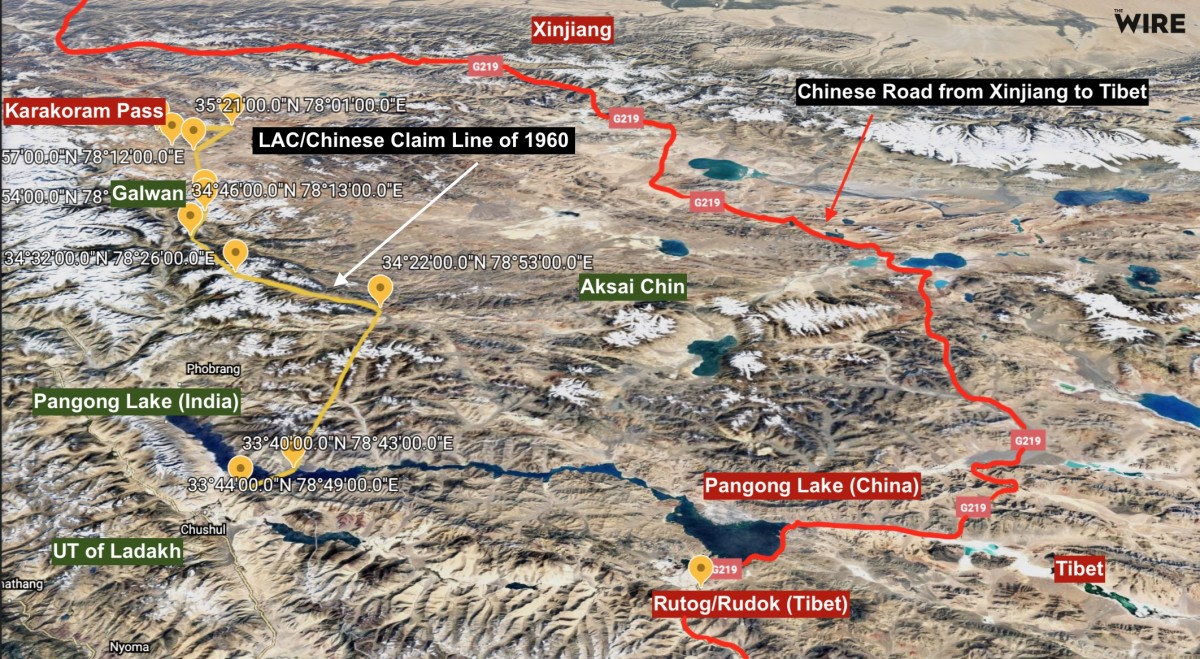 Satellite image of Ladakh, with the Chinese claim line marked in yellow and the Chinese road from Yecheng in Xinjiang to Tibet in red passing through Aksai Chin in eastern Ladakh. Image: The Wire/Google Earth

Trouble first began in October 1959 when the letter war between Prime Minister Nehru and Zhou Enlai became a real one as an Indian patrol was ambushed near Kongka Pass and nine Indian soldiers captured. In 1960, the officials of the two sides sat down for talks and both sides saw came out with a  monumental report,  detailing their respective cases. It was here that the Chinese provided the first detailed official description of their border with India which today is broadly the LAC, though it includes some areas they captured in the 1962 war.

Over the years, both sides had proposed different solutions to the immediate problem of resolving the issue of areas where the two armies had differing perceptions of where this line lay, as well as of the wider boundary question. India had suggested that the two sides press on with the clarification of the LAC, as agreed to in the 1993 BPTA and its companion 1996 agreement on “Confidence Building Measures in the Military Field along the Line of Actual Control in the India-China border areas”. The Chinese stalled this process. Instead, in recent years they have come up with the idea that both sides freeze construction in the border areas. Considering that the Chinese already have a well developed road infrastructure on its side of the border, this is a too-clever-by-half suggestion to hobble the Indian side which is decades behind China here.

The two sides have, since 2003, also discussed a political bargain on the border and have appointed Special Representatives for the task. But despite 22 meetings, they have not been able to finish their task. Actually, insiders say that while they have indeed identified the basis on which the border can be settled, the key decision lies with their top leaders – Xi Jinping in China and Narendra Modi in India.

Both countries should now use  this present crisis to come up with a more durable formula for keeping the peace in their disputed frontier, if not resolving the issue permanently. Intriguingly, it is possible to interpret the developments that have occurred to suggest this. Working out an international border at this point of time may be a step too far, but they could, as per their 1993, 1996 and 2005 agreements, clarify the LAC.

As for the final settlement, the status of Tawang has become a major hurdle. Since the mid-1980s, the Chinese have insisted that India hand over the Tawang tract in Arunachal Pradesh to them in any settlement. They have been motivated by Tibetan documents claiming the area to be part of Tibet, as well as the fact that it is the birth-place of the 6th Dalai Lama. The Chinese fear Tawang could become a rallying point for Tibetan Buddhism when the present Dalai Lama passes on, given the Chinese efforts to eliminate his influence in Tibet.

The Indian side has been equally insistent that this major  town of Arunachal is part of India and that Tibetan authority there was merely ecclesiastical. Indian officials have repeatedly told their Chinese counterparts that whenever they bring Tawang into the discussion in the border talks, they are almost certainly ensuring the talks don’t succeed.

In these circumstances, the best option is for the two countries to work out a mutually recognised LAC. This means sorting out their differences in the points along the LAC where their perceptions differ.  The Chinese actions in the past two months suggest that by permanently occupying certain areas which were earlier just patrolled, they may be trying to present India with a fait accompli, preliminary to making an offer to clarify the LAC.

What is most intriguing, however, is Prime Minister Modi’s response to the events in eastern Ladakh. He has studiously refused to comment on the  problem in Pangong Tso. But following the Galwan incident he gave an overall response: “No one has intruded and nor is anyone intruding, nor has any post been captured by someone”.  So, by conceding that the Chinese remained on their side of the LAC, despite the “battle” of June 15 that took the lives of 20 Indians and an unknown number of Chinese personnel, is Modi signalling the need for some new kind of a modus vivendi on the border ?

Incidentally, during Xi’s visit to India in 2014, and during his own visit to China in 2015, Modi had persistently sought in his conversations with Xi, as well as in official talks, to persuade China to undertake the process of clarifying the LAC.  In  his public speech at Tsinghua University on May 15, 2015 he said  “Our agreements, protocols and border mechanisms have been helpful. But a shadow of uncertainty always hangs over our the sensitive areas of the border region. It is because neither side knows where the Line of Actual Control is in these areas.”

The Chinese refused to have anything to do with it. But now, as they see tensions, as well as Indian capabilities building up along the LAC, they may change their minds.  They have successfully used the uncertainties of the border and their patronage of Pakistan to keep India in check in South Asia. But they may now come to the realisation that such a policy will is increasingly yielding diminishing returns.