Along With Praise for Manmohan Singh In Book, Obama Worried by 'Divisive Nationalism'

In 'The Promised Land', former US president Barack Obama wrote that he found the former PM to be "wise, thoughtful, and scrupulously honest”, even as he questioned whether India would fall prey to the rising tide of illiberalism sweeping the world. 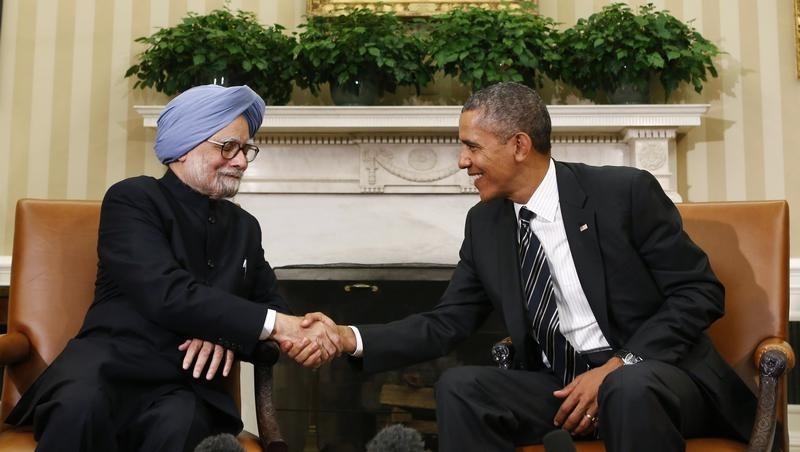 New Delhi: In his new book, former US president Barack Obama’s first visit to India in 2008 forms the backdrop for his musings about the future of India being riven by religion and caste conflicts, even as he lavished praise on former Indian prime minister Manmohan Singh for his “wisdom” and for engineering the modernisation of India’s economy.

The first volume of Obama’s memoir’s The Promised Land, which ends with the killing of Osama Bin Laden in 2011, is releasing worldwide on November 17.

In his characteristic elegant prose, Obama’s first pen portrait of Manmohan Singh was part of his narration of his first G-20 summit in 2009, where he was the self-described “new kid of the block”.

As he described the BRICS leaders one by one, his warmest words were reserved for Singh, with whom he had a “warm and productive relationship” despite a difference in age of nearly three decades.

“Manmohan Singh, the prime minister of India, meanwhile, had engineered the modernization of his nation’s economy. A gentle, soft-spoken economist in his seventies, with a white beard and a turban that were the marks of his Sikh faith but to the Western eye lent him the air of a holy man, he had been India’s finance minister in the 1990s, managing to lift millions of people from poverty”.

Obama observes that for the rest of his tenure – which lasted five more years, he would “find Singh to be wise, thoughtful, and scrupulously honest”.

A year later, Obama was travelling to India – the first of his two official visits to the country.

“I’d never been to India before, but the country had always held a special place in my imagination. Maybe it was its sheer size, with one-sixth of the world’s population, an estimated two thousand distinct ethnic groups, and more than seven hundred languages spoken.”

Analysing his fascination, Obama said it could have been fuelled by listening to Hindu epics in his Indonesian childhood, his interest in Eastern religions or by his cohort of Pakistani and Indian college friends who taught him to cook “dahl and keema and turned me on to Bollywood movies”.

He landed first in Mumbai, where he visited Mani Bhawan, Mahatma Gandhi’s residence for many years.

“More than anything, though, my fascination with India had to do with Mahatma Gandhi. Along with Lincoln, King, and Mandela, Gandhi had profoundly influenced my thinking. As a young man, I’d studied his writings and found him giving voice to some of my deepest instincts”.

As he looked at the spartan private quarters, Obama writes that he had the strongest urge to sit and talk with Gandhi.

“To ask him where he’d found the strength and imagination to do so much with so very little. To ask how he’d recovered from disappointment”.

In his writings, Obama had mentioned his fear about the future of India several times, especially as it echoed the divide in the US where the forces of ethno-nationalism had found fertile ground in recent years, even during his presidency.

The former US president wondered how Gandhi had dealt with the “disappointment” of being unable to prevent Partition, which left millions dead in violence as the subcontinent was cleaved into two countries – or to erase the deep divides in Indian society.

“Despite his labors, he hadn’t undone India’s stifling caste system. Somehow, though, he’d marched, fasted, and preached well into his seventies—until that final day in 1948, when on his way to prayer, he was shot at point-blank range by a young Hindu extremist who viewed his ecumenism as a betrayal of the faith.”

His pre-occupations with the unpredictable nature of these deep, subterranean fissures beneath a democratic visage was also part of his discussions with Singh in New Delhi.

From Mumbai, he travelled to the Indian capital where his first official appointment was a dinner hosted by Singh at their residence in Race Course road. It was at that dinner party that Obama met Congress president Sonia Gandhi and Rahul Gandhi.

When they had an opportunity to chat alone during the evening, Obama said that Singh opened up about his concerns about effect of the global financial slowdown over the economy and the impact of Pakistan’s sponsorship of terrorism on the domestic polity.

Recalling that Singh had expressed fears that rising “anti-Muslim sentiment” had strengthened the influence of the Bhartiya Janta Party (BJP), Obama quoted the former Indian prime minister as saying that the “call of religious and ethnic solidarity can be intoxicating” for politicians, especially during uncertain terms.

With the tide of illiberalism rising in the advanced democracies of Europe and US, he pondered if India could remain immune, especially as the country was still racked by poverty, wealth inequality, violence and ultra-nationalism.

“Violence, both public and private, remained an all-too-pervasive part of Indian life. Expressing hostility toward Pakistan was still the quickest route to national unity, with many Indians taking great pride in the knowledge that their country had developed a nuclear weapons program to match Pakistan’s, untroubled by the fact that a single miscalculation by either side could risk regional annihilation. Most of all, India’s politics still revolved around religion, clan, and caste.”

Obama said that Singh had seemed like the fitting emblem of India’s progress:

“…a member of the tiny, often persecuted Sikh religious minority who’d risen to the highest office in the land, and a self-effacing technocrat who’d won people’s trust not by appealing to their passions but by bringing about higher living standards and maintaining a well-earned reputation for not being corrupt”.

However, the former US president mused about whether Singh’s rise to the office of prime minister represented India’s future or was an aberration.

The symbolism of Singh’s elevation , he felt, was “somewhat deceiving” as the Indian PM was not chosen “originally” for his popularity.

“In fact, he owed his position to Sonia Gandhi—the Italian-born widow of former prime minister Rajiv Gandhi and the head of the Congress Party, who’d declined to take the job herself after leading her party coalition to victory and had instead anointed Singh. More than one political observer believed that she’d chosen Singh precisely because as an elderly Sikh with no national political base, he posed no threat to her forty-year-old son, Rahul, whom she was grooming to take over the Congress Party”.

Even in 2010, Obama wrote that he had been doubtful that Congress party would be dominant over the “divisive nationalism touted by the BJP” after Singh.

He shared with Singh, whom he stated had “uncommon wisdom and decency”, a belief that a democratic structure was best suited to govern multi-ethnic and multi-religious countries like India and US, in order to temper “baser impulses”. However, he increasingly questioned whether these impulses – “the all-too human desire to beat back our own uncertainty and mortality and sense of insignificance by subordinating others” – were too strong to be contained by any democracy.

“For they seemed to lie in wait everywhere, ready to resurface whenever growth rates stalled or demographics changed or a charismatic leader chose to ride the wave of people’s fears and resentments. And as much as I might have wished otherwise, there was no Mahatma Gandhi around to tell me what I might do to hold such impulses back.”