India and Bangladesh signed seven agreements after the talks between Modi and Hasina. 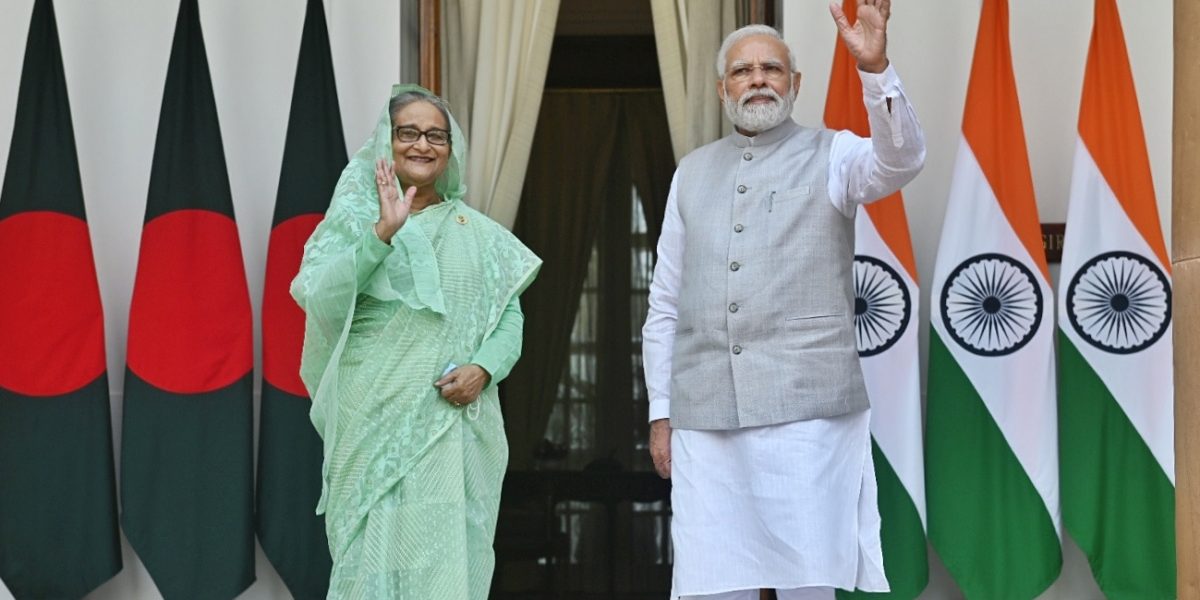 New Delhi: The launch of negotiations for a Comprehensive Economic Partnership Agreement (CEPA) and a water-sharing agreement for the Kushiyara river are the concrete takeaways from the ongoing visit of Bangladeshi prime minister Sheikh Hasina to India, even as she flagged the incomplete Teesta agreement and her host, Narendra Modi, spoke about jointly fighting extremist forces.

After arriving in New Delhi on Monday, Hasina was given a ceremonial welcome at Rashtrapati Bhavan and then held formal talks at Hyderabad House. This was her third visit to India after returning as Prime Minister in 2009.

Noting that India is the largest Asian market for Bangladeshi exports, Modi announced that negotiations for a comprehensive trade pact, which will cover all sectors like investment and goods, will begin. “To further accelerate this growth, we will soon start discussions on the Bilateral Comprehensive Economic Partnership Agreement,” he said.

For India, Bangladesh is India’s biggest trade partner in South Asia. The bilateral trade has grown from $9 billion to $18 billion in the last five years. It has also become the fourth largest export destination for India with the exports registering a growth of over 66% from $9.69 billion in 2020-21 to $16.15 billion in 2021-22.

Indian foreign secretary Vinay Kwatra later told reporters that the two leaders have asked for the negotiations to be completed “in time for Bangladesh’s final graduation from LDC status”. Bangladesh is scheduled to graduate from the Least Developed Country status in November 2026.

India and Bangladesh signed seven agreements after the talks between Modi and Hasina, including one on sharing of waters of the Kushiyara river which is expected to benefit the regions of southern Assam and Bangladesh’s Sylhet region. It is the first water-sharing agreement signed by the two countries after the 1996 Ganges water treaty.

Modi noted that 54 rivers pass through the borders of India and Bangladesh and are linked to the livelihoods of the people of both countries for centuries.

Prime Minister Sheikh Hasina is optimistic that the Teesta river water-sharing deal and other unresolved issues between Bangladesh and India will be settled soon.

In her statement to the media, Hasina pointed out that the Teesta river sharing deal remains incomplete.

The Teesta water-sharing agreement was supposed to have been signed during the visit of Indian Prime Minister Manmohan Singh to Dhaka in 2011. But, at the last minute, West Bengal chief minister Mamata Banerjee withdrew her assent – and since then the finalised text has never been inked.

A day earlier at a reception hosted by Bangladesh high commission, Hasina had playfully jested with reporters that since India is not “giving us enough water, so I can’t give you Hilsa fish right now”. However, she added that the Hilsa supply will be done in October in time for the Durga puja season. All the tables at the reception were named after rivers in Bangladesh, from Teesta, Kushiyara to Padma.

Modi said India and Bangladesh should jointly face terrorist and fundamentalist forces that threaten to attack the mutual trust between the two countries. “Today, we also stressed on cooperation against terrorism and radicalism. To keep the spirit of 1971 alive, it is also very important that we fight together such forces, which want to attack our mutual trust.”

Among the inked agreements, two MoUs were signed between the railway ministries of the two countries on the training of Bangladesh Railway personnel in India and on collaboration in IT systems for Bangladesh Railway respectively.

An MoU was signed between the National Judicial Academy and the Supreme Court of Bangladesh on the training of Bangladesh judicial officers in India.

A separate agreement on cooperation in areas of space technology was also signed.

Another MoU was signed between Prasar Bharti and Bangladesh Television on cooperation in broadcasting, which extended

Modi also touched upon the unveiling of the first unit of the Maitree Thermal Power Plant on Tuesday, and said it “will increase the availability of affordable electricity in Bangladesh.”

He also noted that there were ongoing projects for increasing connectivity between the two neighbours.

“There are also fruitful talks going on between the two countries on the linking of power transmission lines. The inauguration of the railway bridge over the Rupsha river is a remarkable step towards increasing connectivity. This bridge is an important part of the new railway line being built between Khulna and Mongla Port under India’s Line of Credit. India will continue all kinds of cooperation for the development and expansion of Bangladesh’s railway system,” Modi said in his speech.

Briefing on the visit, foreign secretary Vinay Kwatra termed counter-terrorism and radicalisation as an “obstacle and security threat” to the India-Bangladesh relationship.

He said the two leaders held comprehensive talks on how to improve cooperation on the issue.

On the increasing Chinese presence in Bangladesh, he said the two leaders had a very comprehensive discussion on the issue.

“The discussions between the two leaders have been comprehensive. In this context there is a clear common understanding that the strategic priorities of the relationship of the two countries, interests and concerns of India, and interests and priorities of Bangladesh are all factored in our cooperative matrix of engagement,” the foreign secretary said.

“Our relationship stands on its own merits, focuses on its own priorities, and looks at our shared concerns, whether they are related to safety issues or security issues,” he said.

Hasina also sought assurances from India on the supply of perishable commodities and reviewed the Friendship pipeline that will supply high-speed diesel to north Bangladesh.

Answering queries on the Rohingya issue, he said India has sent relief material to Bangladesh for Rohingya refugees from Myanmar.

“We’re aware of the Rohingya issue. There’s a global appreciation of Bangladesh’s role in giving them refuge. We have also provided financial help. In the future, whatever assistance is required Government of India will give,” he said.

Bangladesh currently hosts more than 1.1 million Rohingyas who fled from Myanmar in 2017 following a massive security crackdown by the military.

Kwatra said India supports all “those efforts which ensure safe, steady and quick repatriation to Myanmar”.

Asked whether India brought up the issue of attacks against Hindus in Bangladesh, the foreign secretary stated that has been a continuous conversation on this topic. “Bangladesh government, privately and in public, has conveyed that they are committed to the safety of minorities,” he said.

Earlier on Monday, external affairs minister S. Jaishankar and Adani Group chairman Gautam Adani separately called on Hasina. Hasina also visited Nizamuddin Aulia Dargah in the national capital on Monday and is scheduled to travel to Ajmer Sharif Dargah on Thursday. She will also hand over 200 Mujib scholarships to family members of Indian soldiers killed or injured in the 1971 war.

Hasina had also expressed her interest in meeting with Mamata Banerjee during her current trip, but the West Bengal leader couldn’t come to Delhi.

“Mamata is like my sister, and we can meet anytime. Some ties are personal, beyond politics, like my relations with the Gandhis,” Hasina told journalists on Monday night.

The Bangladesh prime minister met with Congress leader Rahul Gandhi on Tuesday. However, his sister Priyanka Gandhi and his mother Congress President Sonia Gandhi are still in Italy in connection with the death of his maternal grandmother.

The Congress said the two leaders had a fruitful discussion on a number of issues.

“Met the Prime Minister of Bangladesh, H.E. Sheikh Hasina, earlier today,” Gandhi said in a Facebook post. “India and Bangladesh are natural allies and it’s crucial that both our countries work towards strengthening this bond,” he also said.