The two held a meeting on the sidelines of the summit of the Shanghai Cooperation Organisation in Dushanbe. 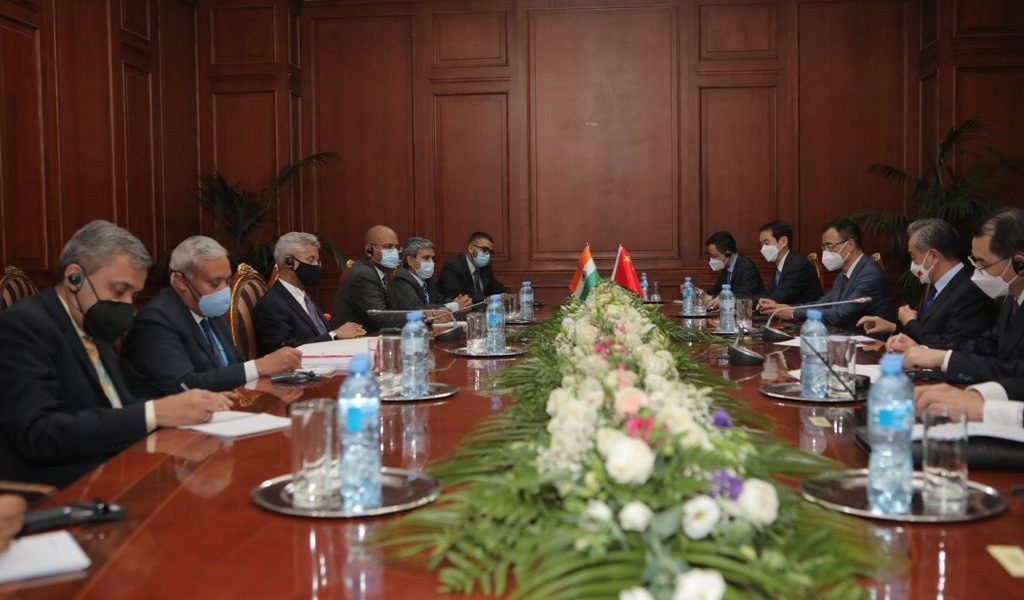 The Indian and Chinese contingents meeting on the sidelines of the SCO. Photo: Twitter/S. Jaishankar

New Delhi: At a meeting with Chinese foreign minister Wang Yi following latest announcement of anti-China trilateral pact by the US, Indian external affairs minister S. Jaishankar stated that India has never subscribed to “clash of civilisations theory”. Next week, India is also going to take part in the first in-person Quad summit in Washington, which China has slammed.

During the meeting on the sidelines of the Shanghai Cooperation Summit in Dushanbe, Jaishankar also conveyed to his Chinese that the two sides should work for an early resolution of the remaining issues along the LAC in eastern Ladakh at the earliest.

Jaishankar also told Wang that Asian solidarity would depend on the example set by India-China relations, according to the Ministry of External Affairs (MEA).

He claimed that the two sides need to establish a relationship based on “mutual respect” for which it was necessary that China avoid viewing the ties with India from the perspective of its relations with third countries, it said.

On Twitter, Jaishankar said: “It is also essential that China does not view its relations with India through the lens of a third country.”

While Jaishankar mentioned “a third country”, the statement by the MEA talked about “third countries”.

It is learnt that the two sides also exchanged views on developments in Afghanistan after the Taliban’s takeover of the country.

In a statement, the MEA said on Friday that the two ministers exchanged views on the current situation along the Line of Actual Control (LAC) in eastern Ladakh as well as on global developments.

It said Jaishankar underlined that it was necessary to ensure progress in the resolution of remaining issues so as to restore peace and tranquillity along the LAC in eastern Ladakh as such an atmosphere in the border areas has been an essential basis for progress in the bilateral relations.

“In this regard, the ministers agreed that military and diplomatic officials of the two sides should meet again and continue their discussions to resolve the remaining issues at the earliest,” the MEA said.

“In this context, the external affairs minister (EAM) recalled that Foreign Minister Wang Yi had in their last meeting noted that the bilateral relations were at low ebb,” it said.

The MEA said both sides in the previous meeting had agreed that a prolongation of the existing situation was not in the interest of either side as it was impacting the relationship in a negative manner.

“The EAM, therefore, emphasised that the two sides should work towards early resolution of the remaining issues along the LAC in eastern Ladakh while fully abiding by bilateral agreements and protocols,” the MEA said.

“The external affairs minister noted that since their last meeting on July 14, the two sides had made some progress in the resolution of the remaining issues along the LAC in eastern Ladakh and had completed the disengagement in Gogra area,” it said.

However, there were still some outstanding issues that needed to be resolved,” it added.

Wang and Jaishankar had held a bilateral meeting on the sidelines of another conclave of the SCO in Dushanbe on July 14. In the meeting, Jaishankar told Wang that any unilateral change in the status quo along the LAC was “not acceptable” to India and that the overall ties can only develop after full restoration of peace and tranquillity in eastern Ladakh.

At Thursday’s meeting, the two ministers also exchanged views on the recent global developments.\”The EAM conveyed that India had never subscribed to any clash of civilisations theory. He said that India and China had to deal with each other on merits and establish a relationship based on mutual respect,” the MEA said.

“For this, it was necessary that China avoid viewing our bilateral relations from the perspective of its relations with third countries. Asian solidarity would depend on the example set by India-China relations,”it said.

It said the ministers agreed to remain in touch.

The border standoff between the Indian and Chinese militaries erupted on May 5 last year following a violent clash in the Pangong lake area and both sides gradually enhanced their deployment by rushing in tens of thousands of soldiers as well as heavy weaponry.

As a result of a series of military and diplomatic talks, the two sides completed the disengagement process in Gogra area last month.

In February, the two sides completed the withdrawal of troops and weapons from the north and south banks of the Pangong lake in line with an agreement on disengagement.