The leaders reiterated support for the “importance of maintaining and promoting peace, security, stability, prosperity, safety, and freedom of navigation in and overflight above the South China Sea”. 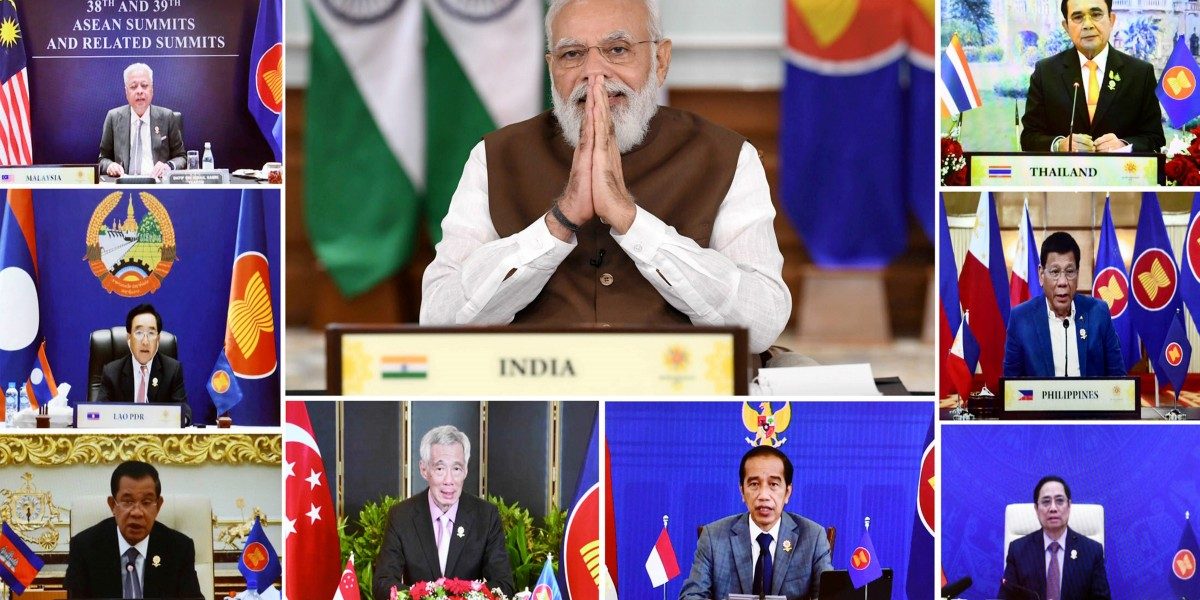 New Delhi: Escalating tensions in the South China Sea, including land reclamation activities, as well as the spiralling violence in Myanmar, were discussed during the annual summit of India and ASEAN on Thursday.

In his address, Prime Minister Narendra Modi underlined the centrality of the Association of Southeast Asian Nations (ASEAN) in India’s Act East Policy and the country’s vision for the wider Indo-Pacific region.

He also announced that 2022 would be celebrated as the ‘ASEAN-India Friendship Year’ to mark 30 years of their partnership.

The ASEAN chairman’s statement released after the ASEAN India summit noted that the situation in the South China Sea came up during the discussions.

Without taking names, the statement said that some countries expressed concerns about “land reclamations, activities, and serious incidents in the area, including damage to the marine environment, which have eroded trust and confidence, increased tensions and may undermine peace, security, and stability in the region”.

China has territorial disputes with half of the ASEAN membership over its sweeping claims in the South China Sea, which Beijing has defended with strong-arm tactics including island-building and naval power.

The leaders also reiterated support for the “importance of maintaining and promoting peace, security, stability, prosperity, safety, and freedom of navigation in and overflight above the South China Sea”.

There was also a collective affirmation to pursue peaceful “resolution of disputes, without resorting to the threat or use of force, in accordance with universally recognised principles of international law, including the 1982 United Nations Convention on the Law of the Sea (UNCLOS)”.

“We emphasised the importance of non-militarisation and self-restraint in the conduct of all activities by claimants and all other states, including those mentioned in the DOC that could further complicate the situation and escalate tensions in the South China Sea.”

Noting “positive progress” in the ongoing discussions for the Code of Conduct in the South China Sea (COC), the chairman’s statement added, “We emphasised the need to promote an environment conducive to the COC negotiations and thus, welcomed practical measures that could reduce tensions and the risk of accidents, misunderstandings, and miscalculation.”

The Indian readout of the summit stated that both sides “noted the importance of promoting a rules-based order in the region including through upholding adherence to international law, especially the UNCLOS (UN Convention on the Law of the Sea)”.

“The leaders affirmed the importance of maintaining and promoting peace, stability, safety and security in the South China Sea, and ensuring freedom of navigation and overflights,” said the Ministry of External Affairs (MEA) press release.

Secretary (East) in the MEA, Riva Ganguly Das, said the joint statement on the Indo-Pacific was one of the major highlights of this summit.

The joint statement said the two sides reaffirmed the objectives and principles of the AOIP, which guide ASEAN’s engagement in the Asia-Pacific and the Indian Ocean regions.

Das stated that the document charts a way forward for practical implementation of the convergences in our vision of the Indo-Pacific to ensure the region’s peace, prosperity and stability.

“We are building upon the convergences that exist between the AOIP as the ASEAN Outlook on Indo-Pacific is called and our own Indo-Pacific Oceans Initiative,” she said.

Launched in 2019, India had invited states in the region to take charge of seven pillars of the IPOI. Only Indonesia has so far come forward among ASEAN countries.

During the summit, the leaders exchanged views on enhancing India-ASEAN connectivity in the “broadest terms”, including physical, digital and people to people, the MEA said in a statement.

On trade and investment, he underlined the importance of diversification and resilience of supply chains for post-COVID-19 economic recovery and, in this regard, the need to revamp the India-ASEAN free trade agreement.

The situation in Myanmar after the military coup in February also figured in the talks.

“The leaders exchanged views on the current situation in Myanmar, including the ASEAN’s efforts in this regard. India remains engaged on this issue and has contributed to the humanitarian assistance to Myanmar,” she said.

Ganguly said as a close neighbour of Myanmar, India will continue to support the restoration of peace and the democratic process in Myanmar for it to emerge as a stable and democratic country.

The chairman’s statement gave more details over the nature of the talks, noting that concerns were expressed about reports of violence and calls for the release of political detainees, including foreigners.

“We called on Myanmar to fulfil its commitment to the Five-Point Consensus of the ASEAN Leaders’ Meeting on 24 April 2021 and acceptance for the timely and complete implementation of the Five-Point Consensus, namely, the immediate cessation of violence in Myanmar and all parties to exercise utmost restraint; constructive dialogue among all parties concerned shall commence to seek a peaceful solution in the interests of the people; the Special Envoy of the ASEAN Chair to facilitate mediation of the dialogue process, with the assistance of the Secretary-General of ASEAN; ASEAN to provide humanitarian assistance through the AHA Centre; and the Special Envoy and delegation to visit Myanmar to meet with all parties concerned.”

Ahead of the ASEAN summit, the remaining nine countries had agreed to bar Myanmar’s military leader from attending the annual jamboree after the junta kept dragging its foot over providing permission to the regional body’s special envoy to arrange meetings with the detained political figures like Aung San Suu Kyi.

The chairman’s statement called on Myanmar to facilitate the visit of ASEAN’s special envoy to Myanmar to build trust and confidence “with full access to all parties concerned”.

“We welcomed the continued support from our external partners, including India, for ASEAN’s efforts in the swift and complete implementation of the Five-Point Consensus, particularly on humanitarian assistance. In this regard, we appreciated India’s in-kind contribution of USD 200,000 in medical supplies to support ASEAN’s efforts in providing humanitarian assistance to the people of Myanmar,” it added.