Anthony Blinken Conveyed a Warning to the Modi Government But Did the Prime Minister Hear It?

If there is anything to be learned  from Blinken’s visit, it is that the era of the cloistered nation state, which enshrined the absolute right of governments to deal with their people as they wished, has come to an end.

In the joint press conference that ended his one-day visit to India, United States secretary of state Anthony Blinken did not try to hide the US’s discomfiture over the turn that Indian democracy has taken in the past several years under Prime Minister Narendra Modi. Answering a question posed by the Wall Street Journal’s correspondent, he readily admitted that “shared democratic relations and high ideals were very much a part of our conversation”. Since busy world leaders do not waste time having conversations on things they completely agree on, Blinken was signalling, in diplomatese, that the two sides do not see eye on the fate that has befallen these high ideals.

The language of diplomacy has its own conventions. One of these is to disguise admonition as praise. The former was abundantly visible in Blinken’s statements. The secretary of state lavished praise on India’s democracy, but its underlying message was that the Biden administration’s relationship with India would depend upon the  extent to which the Modi government respects the written and unwritten rules and conventions of democracy. He softened the message by admitting that American democracy too was a work in progress, but his message was clear: violations of human rights and freedoms occurred in the US too, but its federal and state governments did not shirk from taking corrective action. The Modi government had to stay the course too: backtracking was unacceptable.

Jaishankar is far too seasoned a diplomat not to have got Blinken’s message. Members of Biden’s administration had expressed their discomfiture over the Modi government’s disregard for civil rights and liberties more than once in the past six months. The Pegasus revelations have only served to heighten that concern. So Jaishankar’s response to Blinken was anything but spontaneous. His response was chilling.

“…it is the moral obligation of all polities,” he responded, “to really right wrongs, when they have been done, including historically and many of the decisions and policies you’ve seen in last few years, fall in that category. …freedoms are important,” he elaborated, “we all value them, but never equate freedom with non-governance or lack of governance or poor governance. They are two completely different things.” (emphasis added)

After seven years of Modi rule, it is not difficult to read between the lines of his response: the Modi government will continue to pay lip service to democracy but, as a sovereign nation, it had the right to decide why, when and how it will curtail the rights and freedoms guaranteed to the people by India’s constitution. Jaishankar did not stop there, but claimed further that this was not merely a constitutional, but a moral right, in short a right that transcended those inscribed in the constitution because it came directly from some higher authority.

Jaishankar then claimed that this “moral right” did not cover only present day wrongs but ‘historical’ ones as well. To describe this response as outrageous would be an understatement. Every government has not only the right but a duty to set perceived wrongs right. But it can only do so in the present, while the instruments for doing so still exist. As the last Ming emperor of China wrote before hanging himself, he had forfeited his right to live because he had not kept himself informed of his peoples’ plight, and therefore failed them in their hour of need. 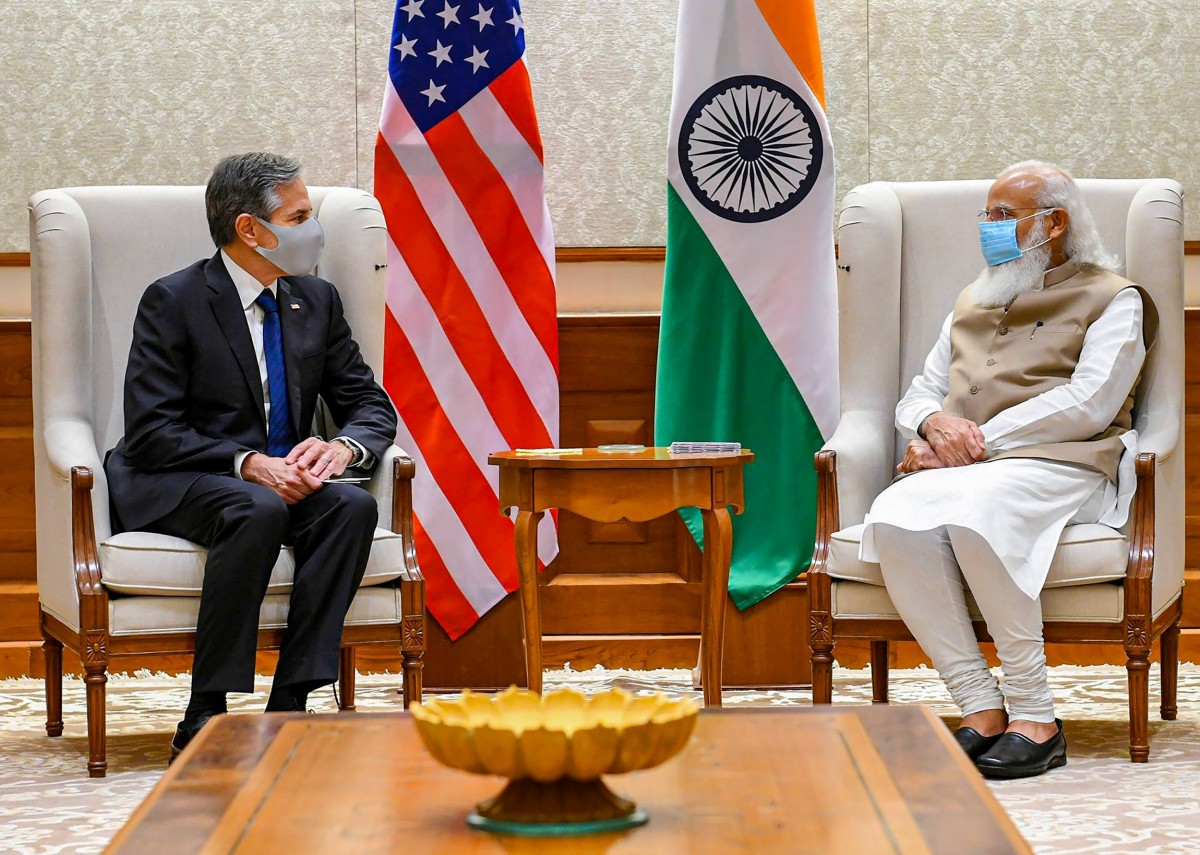 Prime Minister Narendra Modi with US secretary of state Antony Blinken during their meeting in New Delhi. Photo: PTI

But how can a government correct a historical wrong, especially the ones the BJP the believes happened? For history is irrevocably a part of the past. It can be studied. We can learn lessons from it. But it cannot be changed. A wrong done in the present can be undone. But how does one undo a wrong done in the past?

The Sangh parivar’s answer has been staring us in the face for the past seven decades: it is to punish the descendants of the ‘wrongdoers’. These are the descendants of “the Muslims” who  conquered  north India. The ‘historical wrongs’ the parivar constantly harps upon is the pillage that accompanied the conquests, the destruction of temples, the driving out of the Brahmin priesthood and  the forcible conversion of a large section of Hindus to Islam.

As innumerable historians have pointed out, many of these assertions, especially of forcible conversions to Islam, are greatly exaggerated. But to the extent that they happened, they did so hundreds of years ago. The perpetrators have been dead for centuries. So the moral right that Jaishankar, perhaps unwittingly, claimed was not the right to seek justice but to inflict retribution.

How could a seasoned diplomat have made such a remark? The most plausible answer is that he was required to do so by his prime minister. Blinken had made no secret of the purpose of his visit to Delhi. Not only had he made it clear that the continuation of close relations with the US depended upon India remaining a democracy in letter and also spirit, but that the Biden administration would not allow India to drag it into a conflict with China. In a few terse sentences, therefore, he had destroyed every pillar of the ‘special relationship’ with the US, that Modi had made the talisman of his success in foreign policy.

Also read: The India-Pakistan Flagpole Rivalry Is Another Mutual Contest That Goes Beyond Military Stand-Offs

For the prime minister, this was a double blow because it also punctured the larger-than-life image he had sought to create for himself as the heroic defender of India’s dominant position in South Asia and challenger to China’s hegemonic ambitions in the Indo-Pacific region. He cannot therefore be blamed for concluding that the US has not only emboldened his political rivals within India, but within the Sangh parivar itself. That would account for the belligerent manner in which Jaishankar asserted his government’s right to redress the wrongs of history. It was, in effect, a warning to the US to mind its own business.

That is not going to happen. If there is anything to be learned  from Blinken’s visit, it is that the era of the cloistered nation state, which enshrined the absolute right of governments to deal with their people as they wished, has come to an end. The revolutions in transport and communication technology of the past half-century, and the mass migration of highly educated workers from the developing to the developed world, have made every government’s business a part of the business of its peers.

The era of insular nation states is over, but the Sangh parivar remains locked within the cage of its outmoded perceptions. This has prevented Modi from perceiving how far he has taken India down the road to becoming a state of questionable democratic credentials. That his own foreign minister should have been unable to prevent this, speaks volumes for the way in which he has centralised power within the government without understanding how to use it.