'Africans Are Cannibals,' and Other Toxic Indian Tales

The local BJP and Hindu Yuva Vahini are backing rioters accused of racist attacks on African students in Greater Noida. 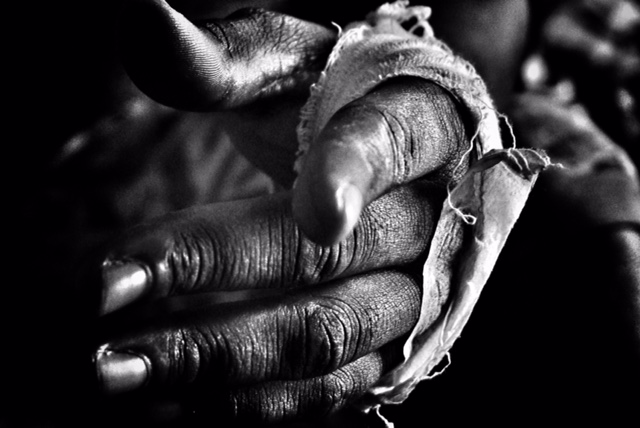 The injured hand of 24-year-old Imran Uba, who was a victim of the violence in Greater Noida. Credit: Shome Basu

Noida (Uttar Pradesh): ‘Vasudhaiva Kutumbakam’ is a phrase Indians are fond of wheeling out but when it comes to African members of the human family, some residents of Greater Noida seem to prefer the epithet ‘cannibal’. Such is the ignorance prevailing among the population of this bustling, modern extension of the capital that when an Indian boy went missing last week, local residents demanded the police search the refrigerator in the house of a group of Nigerian students for his body parts.

Last year, African students in Bangalore bore the brunt of local xenophobia but the events of the past few days have demonstrated that good old fashioned racism is alive and kicking in the national capital region.

For the African residents of Uttar Pradesh’s Greater Noida – mostly students studying in private universities that have mushroomed in the area – life has become difficult and stressful after five Nigerian students were blamed for the death of Manish Khari, a Class XII student of Jaypee International School, last Saturday.

The incident has triggered stray incidents of attacks against Africans residing in the area and the students have now been advised by the police to stay indoors till they are confident of guaranteeing their security on the streets. 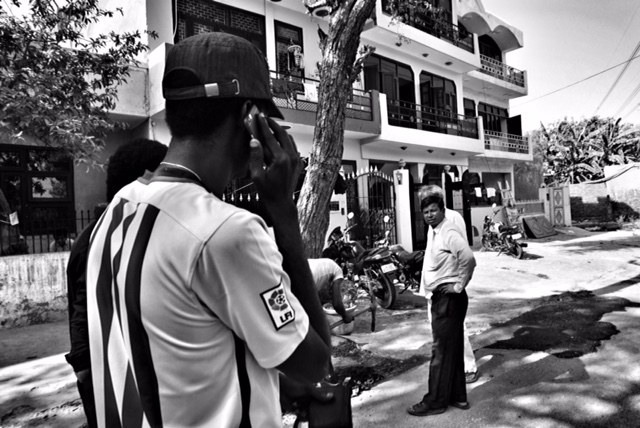 So far, the Noida police have arrested six Indian men for their alleged involvement in the racist assault at Pari Chowk. The local unit of the Bharatiya Janata Party and Hindu Yuva Vahini – the vigilantist outfit headed by Uttar Pradesh chief minister Yogi Adityanath – have come out in support of the accused race rioters.

According to the Hindustan Times:

On Thursday, Harish Chandra Bhati Gurjar, a state functioning member of the BJP and a former minister, wrote a petition to senior superintendent of police Dharmendra Singh, asking him to stop arresting the people booked.

“The police had released all the Nigerians booked for Khari’s death, which angered the public. Due to the acts of a few rioters, 1,200 people were booked. We demand that the police take strict action against the guilty in Khari’s death and stop making any more arrests among the 1,200 people who have been booked,” said Gurjar. 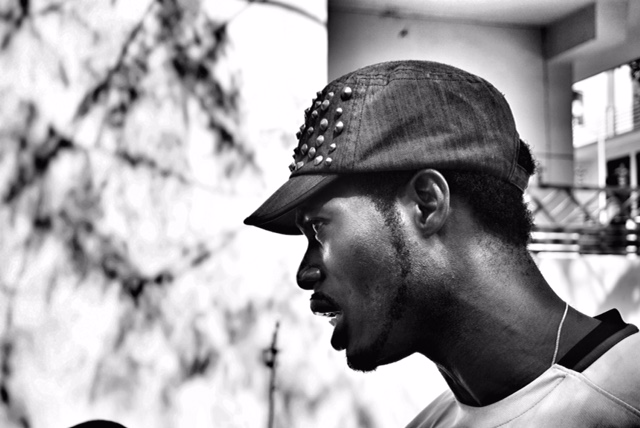 Samuel Bukola, one of the leaders from the African Students Association is coordinating efforts to look after the needs of the students confined at their homes after the recent xenophobic attacks in Greater Noida. Credit: Shome Basu

Khari’s parents alleged that their son died due to an overdose of drugs allegedly supplied to him by their Nigerian neighbours, who are students of Noida International University (NIU). Before that, when he was missing for a day, local residents, egged on by the boy’s family, accused the students of cannibalism and barged into their house to check the fridge to see if they could find the Manish’s body inside. The five students were arrested on charges of murder but later released as no evidence was found against them.

The incident nevertheless prompted sporadic racist attacks in which African students have been singled out and assaulted by mobs in Greater Noida.

Imran Uba, a 24-year old Bachelor in Business Administration (BBA) student at NIU was one among the several students attacked. He was beaten up by a mob near Pari Chowk on Monday evening when he was returning from his sister’s house in Delhi Police Society. 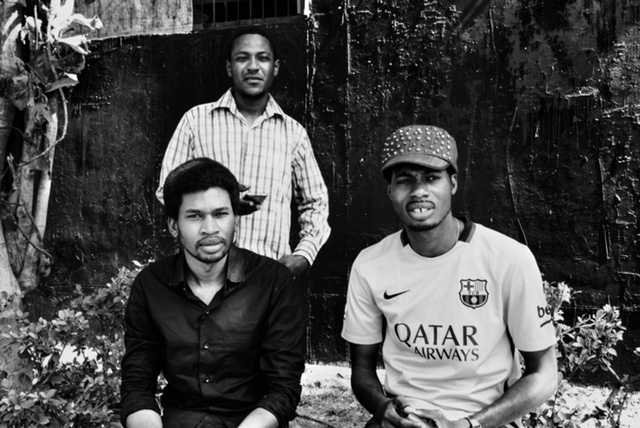 (Sitting, left to right) Abdoulaye Ibrahim Mahamat and Samuel Bukola are representatives of the Association of African Students in India. Credit: Hina Fathima 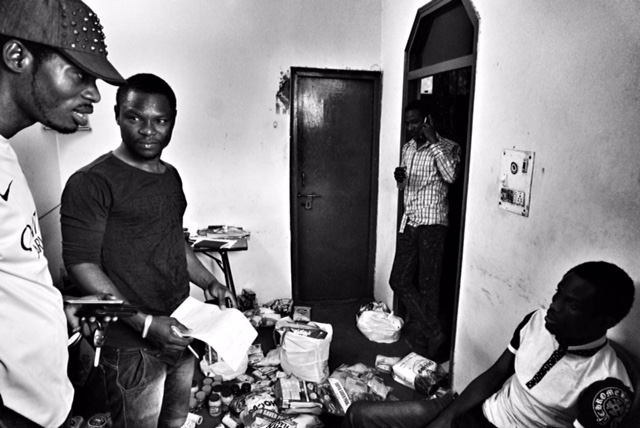 Food and emergency materials to be distributed from a home at Greater Noida to the students and other African residents confined to their homes after the recent racist attacks on them. Credit: Shome Basu

With an off-white bandage wrapped around his forehead and both his wrists, Uba is now determined to leave India. While speaking to The Wire, one could sense the deep exhaustion and despondency that had enveloped him, as he is still trying to recover from the psychological shock caused by the racist attack.

“Our parents are now afraid. They do not want their children to study here anymore. They are asking me to come back to Nigeria and relocate to some other country like Dubai or Malaysia for studies,” says Najib Hamisu Umar, who is the coordinator for Nigerian students in the Association of African Students in India (AASI). Umar is currently doing his Ph.D in electrical engineering at Sharda University. 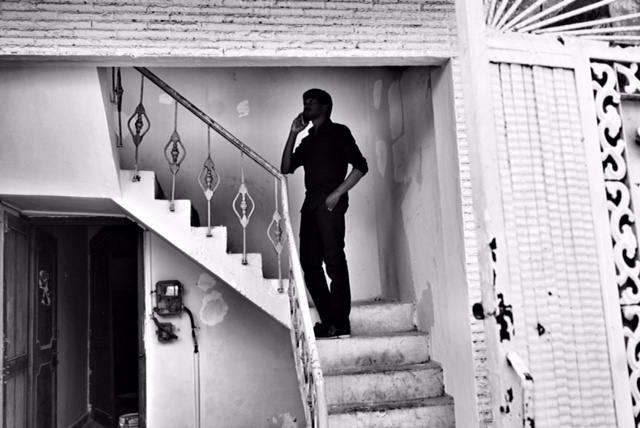 Abdoulaye Ibrahim Mahamat, former president of the African Students Association co-ordinates the effort to call other African residents in the Greater Noida area to check on their safely. He is also working with the state administration to check the law and order situation. Credit: Shome Basu

According to Abdoulaye Brahim Mahamat, senior advisor and former president of AASI, events went out of hand after the disappearance of Manish Khari last Friday. Locals accused Nigerian nationals living two blocks away at the NSG housing society in Greater Noida. The boy returned home the next morning and subsequently passed away, which led the locals to assume it was death by drug overdose.

Although the initial autopsy reports say the cause of Khari’s death was a heart attack, people in Greater Noida refuse to listen and continue to blame Africans.  The attacks which followed highlight the underlying xenophobia and racism that is driving a section of residents.

“There are many African students here. Their safety has now become a big concern. We need justice for the students. These kinds of racial attacks should be stopped,” says Mahamat. 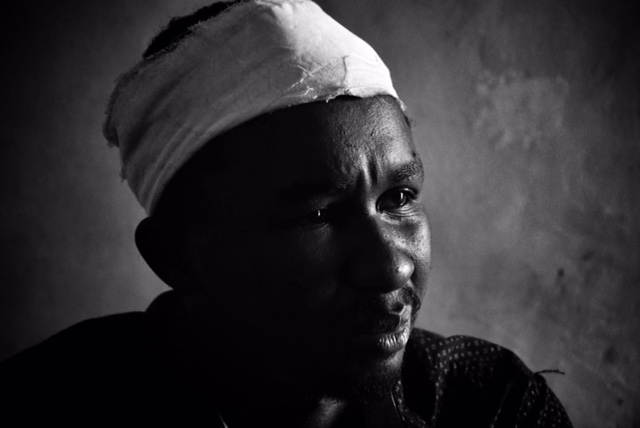 Imran Uba, a 24 year old BB student from Noida International University was returning from his sister’s home. He was grabbed by some Indians and assaulted. His forehead was fractured. Credit: Shome Basu 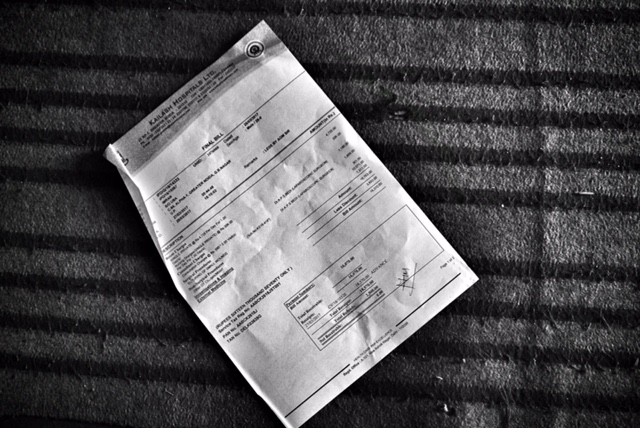 After being treated at a hospital, Imran’s bill came around Rs 16,000. He had to pay from his own pocket as no government department came forward to help. He is determined to leave India. Credit: Shome Basu

For the past few days, life has resembled solitary confinement as all African students have been advised by AASI to remain indoors until the violence ebbs. Volunteers of the association have been distributing food and emergency care packages which they say have been donated by their ‘good Indian friends’ through their Facebook page.

Umar said that although the police has released the five Nigerian students who were arrested in connection with Khari’s death, their passports are still being held by them. “We welcome the investigation but there should be a fair investigation”, he added. 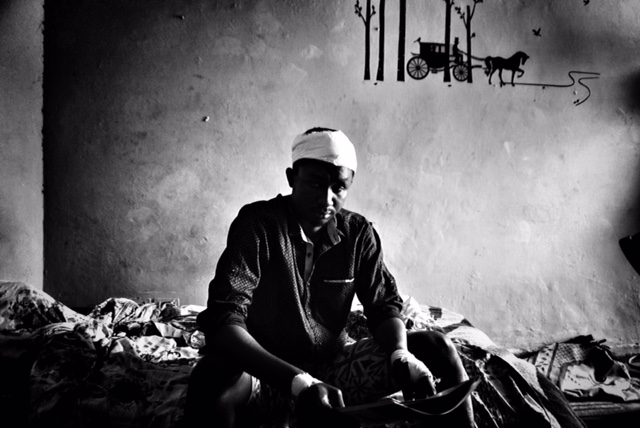 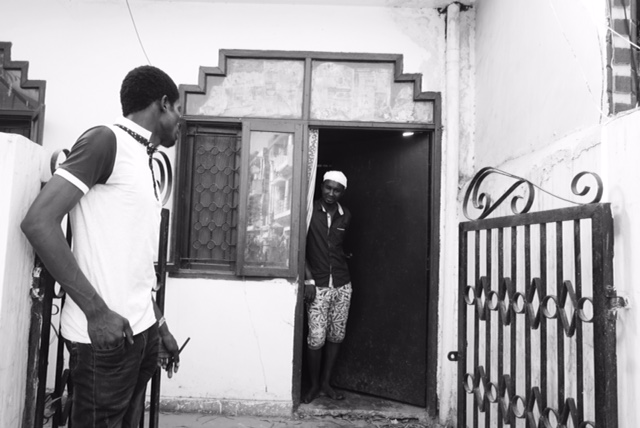 Najib Hamisu Umar, a post doctoral student from Nigeria, has been the caretaker for his own countrymen in Delhi & NCR. He coordinates with the injured and keeps an update for all students confined at their homes after the recent attacks. Credit: Shome Basu

The situation is still grim in Greater Noida as the relationship between the Indians and African residents has been ruptured. But the African students are hopeful that things will improve. They say that the police have been cooperative and they have been receiving support from friends and teachers at their universities. While incidents of racism and ‘micro aggression’ are a daily reality for the students, they also point to positive examples of hospitality and friendship they have received from their Indian counterparts. 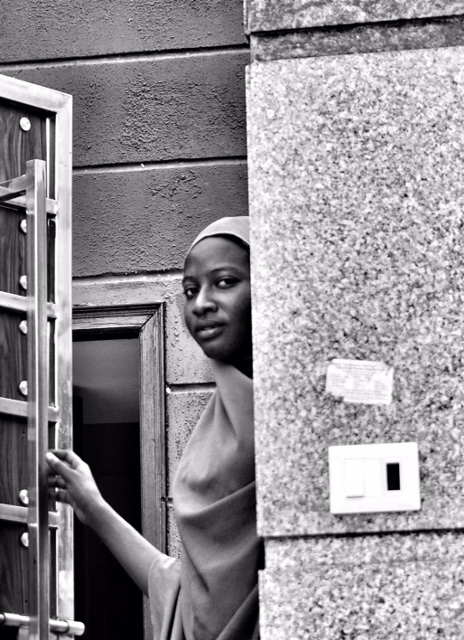 A Nigerian lady waits for the police and an ambulance as she is unwell and needs an escort. After the recent clashes none of the African nationals are venturing out on their own. Credit: Shome Basu

Samuel Bukola of AASI hopes that this wave of attack is the last one of its kind. African nations and India have great ties and they look forward to maintaining those, he says.