'It is really sad that in a difficult time when Afghans needed Indian help, they were denied,' Farid Mamundzay told 'The Wire.' 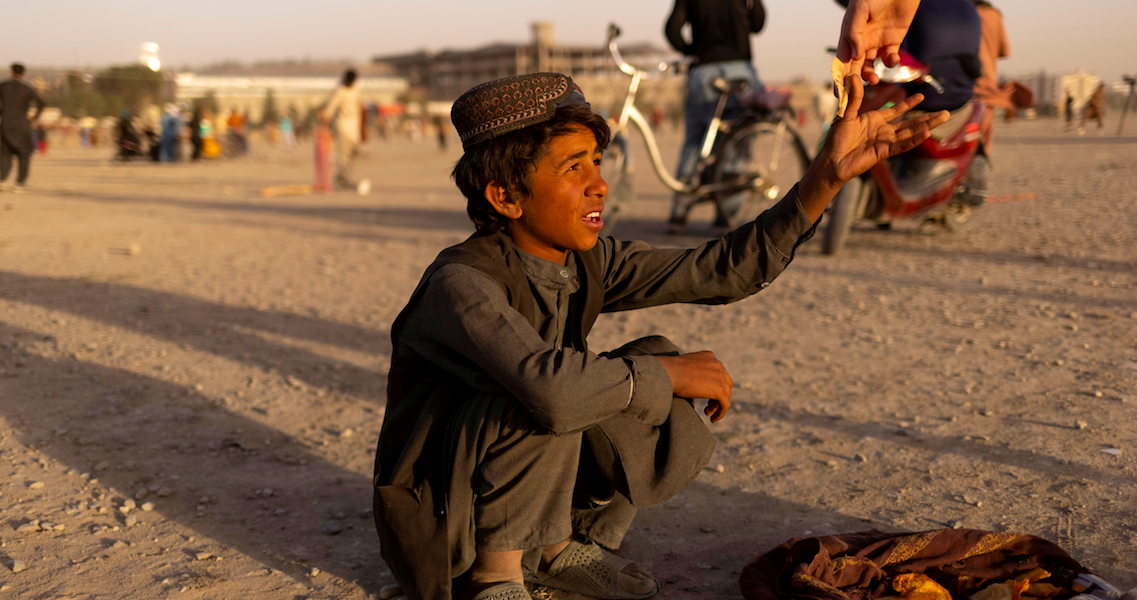 New Delhi: With only 200 e-visas granted so far, India’s “cold feet” towards granting emergency entry permits for Afghans desperate to leave the country under the new Taliban regime has been “disheartening” and not expected from a “historic friend,” Afghanistan’s ambassador Farid Mamundzay has said.

It has been nearly four months since the Taliban walked into the Afghan capital of Kabul as President Ashraf Ghani and his aides hurriedly fled the country.

At his office in the Afghan embassy, located on a prime spot in Delhi’s diplomatic avenue, Mamundzay told The Wire that the disappointment resulted from the close friendship that both sides had deliberately cultivated at a people-to-people level, over decades.

Therefore, the Indian response in the immediate aftermath of the Taliban takeover had been “shocking” to the ambassador.

“At the time of crisis, we don’t look at other nations but at India. We don’t look at Bangladesh or Sri Lanka or Nepal or Pakistan or China with whom we share a border… And then the ‘cold feet’ response was disheartening. It disheartened us,” the Afghan ambassador told The Wire.

A day after the Taliban’s takeover was completed, India stated that it would facilitate “repatriation” of Afghan Hindus and Sikhs while adding that it will “stand by” Afghan citizens who had been “our partners in the promotion of our mutual developmental, educational and people to people endeavours”.

So far, Indian repatriation flights have brought back 669 people, including 448 Indians and 206 Afghan nationals. The latest flight arrived on December 10, bringing back 10 Indians and 94 Afghans, primarily those belonging to Afghan Hindu and Sikh communities.

On August 17, the Indian government announced a new emergency e-visa category for Afghans. The demand for Indian e-visas further sky-rocketed when India cancelled all un-utilised visas granted before August 15. The argument given was that there were security breaches as some passports were “misplaced” from India’s visa office. This was, however, denied by the head of the Afghan travel agency which has been handling visa outsourcing operations for over 10 years.

When the Ministry of Home Affairs was repeatedly asked by journalists how many e-Emergency x-Misc visas were issued, the standard reply was that the number could not be made public.

During the current parliament session, the MHA and Ministry of External Affairs have revealed in written replies to questions that “200 e-Emergency X–Misc visas have been issued to distressed Afghans”.

“When the United States evacuated 150,000 to 160,000 [Afghans], when the European Union evacuated closer to 100,000 Afghans – and the US is smaller by three to four times than India in population, and is at a distance [from Afghanistan] which is 10 times more than India…India has allowed only 200 e-visas,” ambassador Mamundzay said. 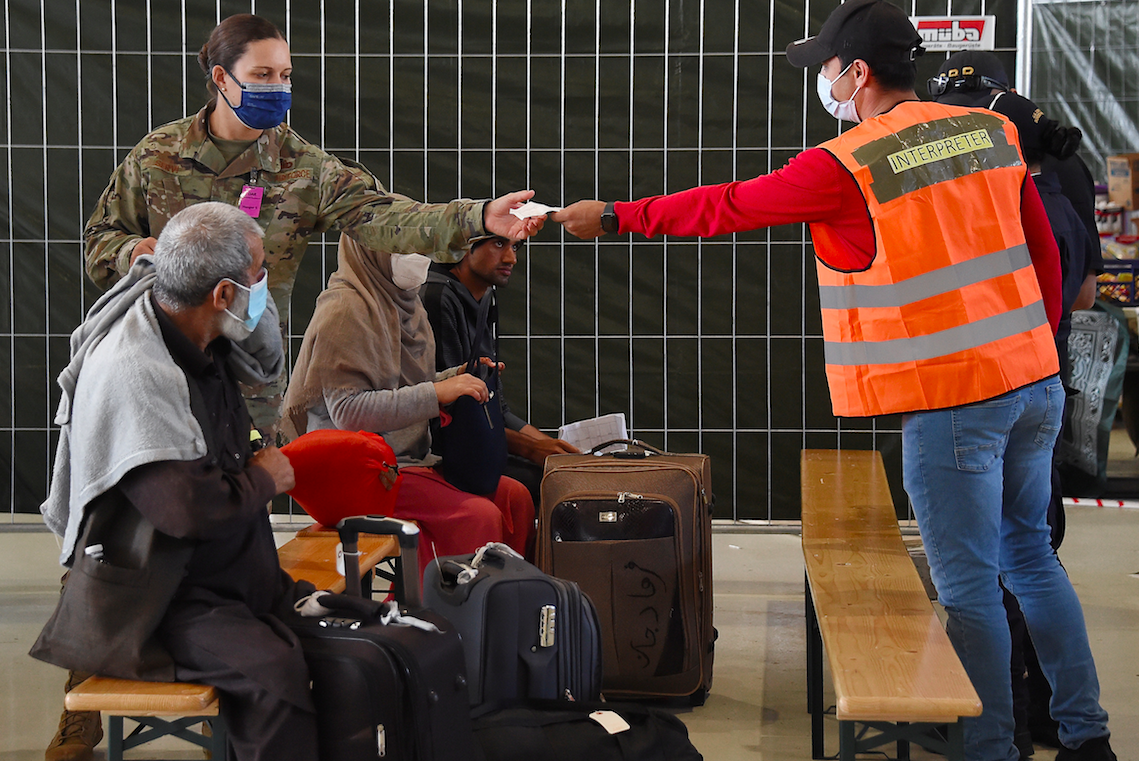 Afghan refugees being processed inside Hangar 5 at Ramstein Air Base in Germany, September 8, 2021. Photo: Olivier Douliery / Pool via Reuters

“I think that there is something that could not be classified [but] where we can claim that India has been our strategic partner or historical friend,” he added.

Mamundzay, who took over in his capacity in March this year, pointed out that a grant of 200 e-visas was inadequate for a country of India’s size and importance to Afghanistan. “…[T]wo hundred visas and 40 million population means that only four to five visas were given for every million. The entire population can’t have turned into Taliban overnight,” he added.

It is believed that about 60,000 Afghan citizens had applied for Indian e-visas. “There are colleagues in the embassy whose families are waiting for e-visas for more than the last three months. I am helpless when it comes to assisting them”.

The Indian government had also told parliament that the stay visas of 4,557 Afghan nationals residing here has been extended.

Afghanistan had been the second-largest source of foreign students in India for several years. India had sought actively to attract young Afghans to its educational institutions as a part of strategic policy. Since 2016, over 39,000 Afghans have arrived in India on student visas. The annual numbers had gone down by around a half in 2020 and 2021 due to the COVID-19 pandemic.

Besides students, India also invited Afghan National Army officers to train in defence institutions. Currently, there are around 180 Afghan officers in India, one-third of whom graduated recently.

“That’s another big area for concern. They can’t go back to Afghanistan after the end of their training,” the ambassador said.

The international rights group Human Rights Watch had documented in a report last month that despite a proclaimed amnesty policy, Taliban forces have killed or caused the disappearance of more than 100 former members of the Afghan National Security Forces.

An embassy in trouble

So far, the former officers – and their families – have been assisted by some local groups with essential commodities and food. “Internally, we have been providing whatever assistance we can for their accommodation,” the ambassador said.

The embassy itself has been running under difficult circumstances – with salaries being paid from past savings and a small revenue stream. “We downsized greatly and let go of a lot of people. We don’t rent our building or the residences, which means big savings in Delhi. We have some funding, some resources from the past and [earn] others from consular fees,” Mamundzay said.

This may still not be enough to sustain it for the long term if current conditions prevail. “It will be difficult, but we have to find ways to ensure that it continues in one way or another,” the ambassador said.

In the 1990s, during the Taliban’s first stint in power, the Afghan ambassador had been affiliated to the Northern Alliance, which had paid for the upkeep of the embassy. The Indian government had also chipped in.

Over two decades later, the Taliban is back, but its legitimacy is still not universally recognised. The key difference is there is no viable opposition to the Taliban, which has taken complete control of the country. There is also not much appetite, either inside Afghanistan or among international players, to foster a civil war.

The vestiges of the Afghan republic, which no longer exists, continue to adorn the diplomatic building. The tricolour Afghan flag still flies from the main flag post, while photos of former President Ghani continues to hang from the walls of offices, including that of the ambassador’s.

Mamundzay claimed that the embassy will be functional “as long as we have people who need consular services. students who require help”.

He also highlighted the dire situation in Afghanistan, where nearly the entire population was on the brink of poverty. “There are people putting ads on trees that [say], ‘I am willing to sell my kidney’. This is the magnitude of the catastrophe unfolding in Afghanistan”. To get temporary relief from the unfolding crisis, Afghans were “not looking at the Taliban to fill that vacuum, but at our partners, the international community, responsible countries,” he added. A mother shops with her children at the market in Kabul, Afghanistan October 29, 2021. Photo: Reuters/Zohra Bensemra/File Photo

As first articulated at the UN-backed aid conference, India’s position has been for an unhindered and immediate supply of humanitarian assistance to Afghanistan. The key, India maintained, is that the UN has to be put in charge of distribution.

The first direct supply of Indian aid went on a return flight of Kam Air that evacuated Indians and Afghans on December 10, in the form of urgently required medicines. More flights are planned this week, with at least half a million Covishield COVID-19 vaccines scheduled to be delivered in a chartered flight soon.

India is also negotiating modalities with Pakistan to transport 50,000 metric tonnes of wheat to Afghanistan.

The senior diplomat pointed out that Afghan people were the victims of the devastating consequences of actions in the corridors of power in Kabul and other world capitals. “There was a set of incidents that led to a major vacuum, and largely the President was responsible for it. He brought forward a situation where major chaos was created. He and people close to him are responsible for it”.

The Taliban, he noted, could also have taken steps to have an actually inclusive government, which would have assured the citizenry and allowed the international community to grant them legitimacy.

While engaging with the Taliban through a diplomatic mission in Kabul is “welcome”, Mamundzay warned that recognition of the Taliban government must come after “careful consideration”.

“Unless and until the people of Afghanistan do not give official legitimacy to Taliban”, the international community should not rush to recognise them, he cautioned.

He also warned that the legitimacy of the Taliban regime should not be confused with the status of the Afghan nation.

“Look, we as a people would remain, our geography would remain. We may have lost the republic, but Afghanistan has remained. We are not a failed state. We are a genuine people and have a genuine country. We have been a nation when many countries in the region did not exist. Some of them share borders with us,” he said.